My notes for documenting this day read, “Most Amazing Day.” I traveled through, and documented for you, twelve locks on the Erie Canal – heading east Lock 22 through Lock 11. This is a photo report, and possibly the only one on-line showing this journey (and next post you will get the rest of the canal heading east). I narrowed down from 123 images to what you see here, starting at 5:40 AM on 13 September, and ending at 9:51 PM.

On my way out to be on deck next to the Pilot House, which had been lowered so we can fit under all bridges, I took this image of the map display so you would see where we stayed overnight in Sylvan Beach. The Grand Mariner had just gotten underway.

good morning Erie Canal, at 6:03 AM (this image, as many here, can be clicked for a larger view)

still dark as we approached Lock 22 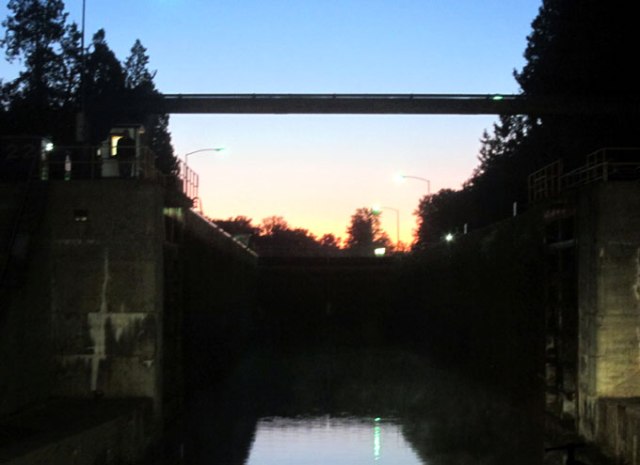 and ready to leave the lock. The locks were manned both before and after normal operating hours. As a “commercial vessel,” that pays well for transiting the canal, the canal authority accommodates Blount Small Ship Adventures’ schedules.

The sun was still rising as we locked through 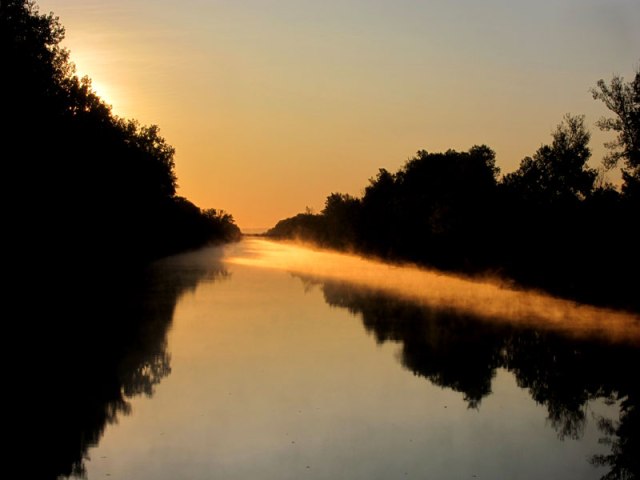 Next to share with you is Guard Gate 6 at East Rome. A guard gate helps isolate sections of the canal in case of emergency, such as a break in the canal wall, accident, or extreme high water. They are also used when a section of the canal needs to be drained for maintenance or winter freeze protection. And, now you know. To learn more about the canal’s features, click this link.

even with the sun up, there is peace and tranquility on the Erie Canal

Keeping track? What is next? Lock 20, Whitesboro (Marcy) with a lift of 16 feet. I am lucky to have a copy of the 284 page complete guide to paddling the New York State Canal System. For paddlers, but still invaluable to answer my questions. 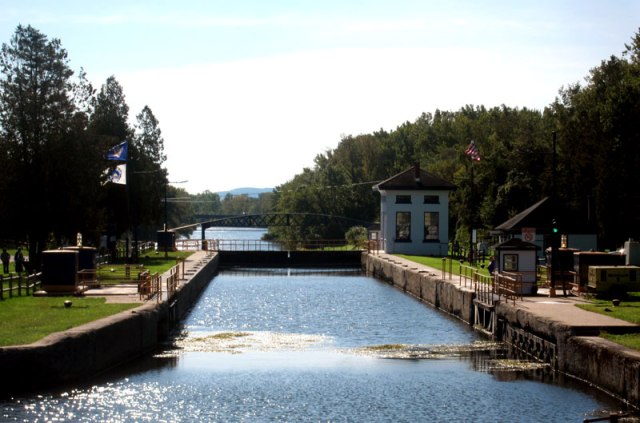 and, leaving Lock 20 – the clamp you see on the gunwale holds on a light (another on the starboard side). These were attached when the top deck was stripped to fit under the bridges, and as you see in a number of images, we needed the lights at night. 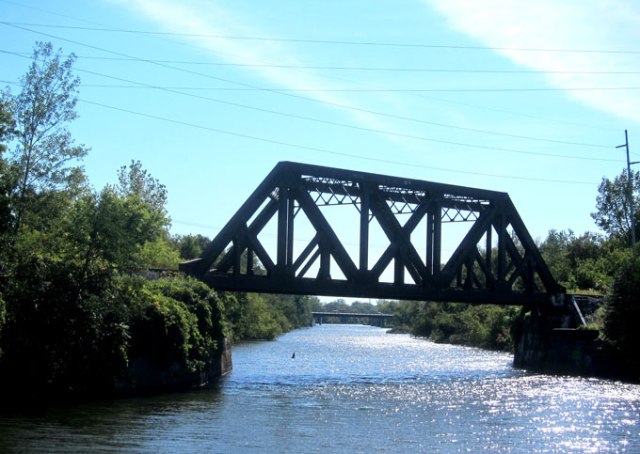 As we were approaching my favorite lock, Lock 19 (remember my post from July?) I was able to catch an Amtrak train crossing the bridge just hundred of yards east of the lock. Hope you can make it out passing over the bridge. Most of the images in this post can be clicked for a larger size.

And, getting closer to Lock 19 in Frankfort (Schulyer) – not well marked off NY5 – but worth finding and stopping.

close to the east gates 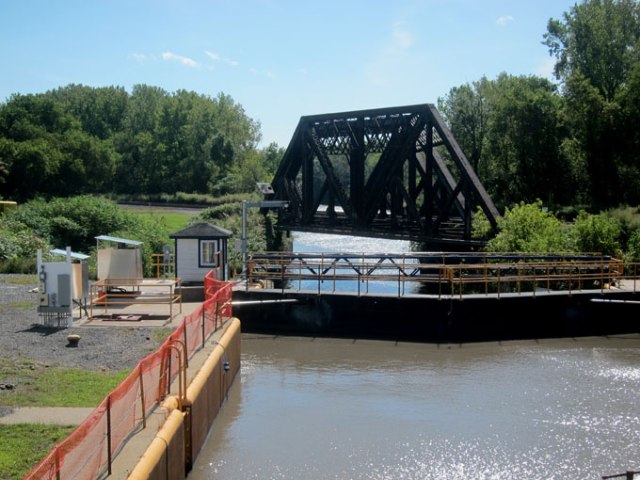 and ready to depart the lock 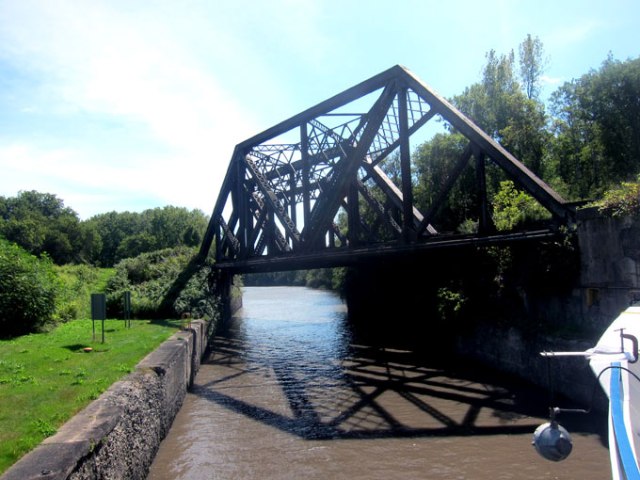 and in July I ate a late lunch on the deck of the Ilion Marina and RV Park. Here it is from the water.

and, not quite two miles further east is Gems Along the Mohawk in Herkimer. Restaurant, gift shop, etc., but most important the visitor center where I met Melody who told me about Blount Small Ship Adventures – thus enabling this adventure.

the bridge and moveable dam just east of “Gems” And, see another guards gate set? 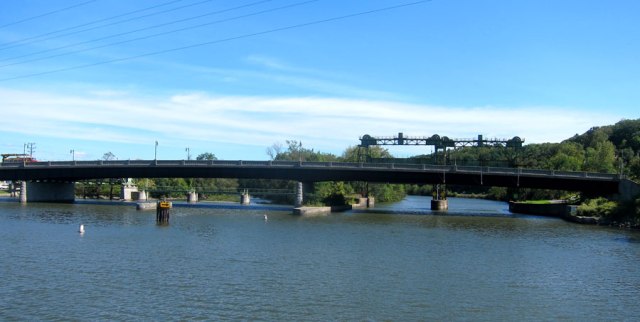 time for…yes Lock 18 in Jacksonburg with a lift of 20 feet. 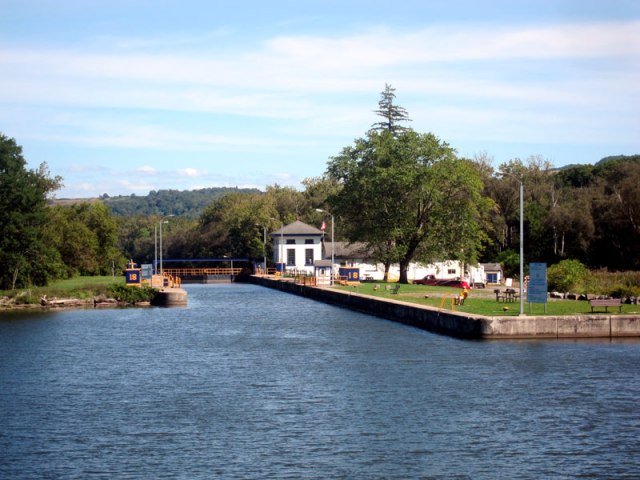 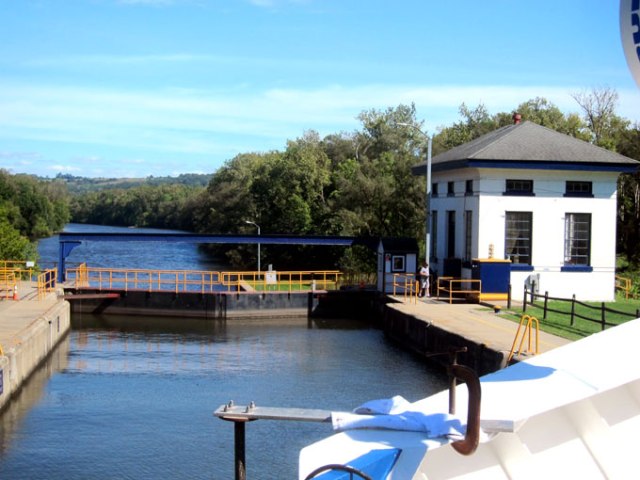 in about three miles (still heading east, in case you forgot) comes Little Falls Canal Harbor and Rotary Park just before Guard Gate 4, and Canal Place park where I visited in July. Get to the end of that post to see spectacular Lock 17 from landside.

Views around Benton’s Landing and Canal Place in Little Falls that you can enlarge for larger size views. 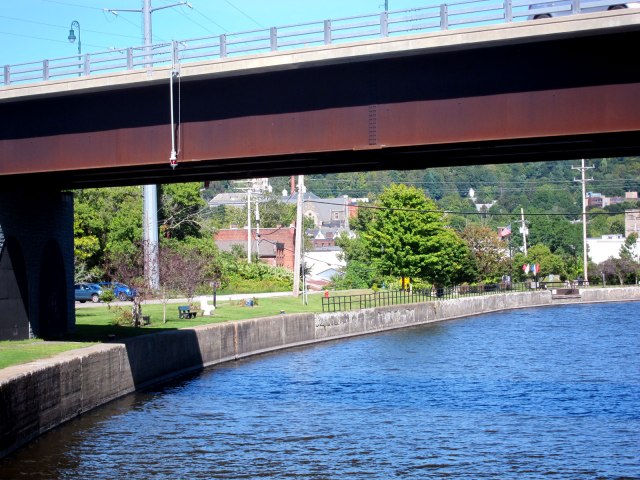 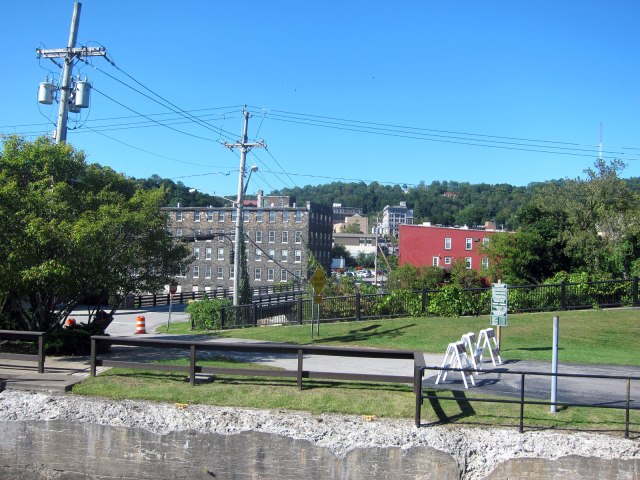 and a half-mile around the bend you approach the top side of Lock 17 with its astounding 40.5 lift – until recently, the highest single lift lock in the world. It is the only “shaft lock” on the Erie Canal system. The guillotine gate at the lower end moves vertically rather than gates swinging to the sides. 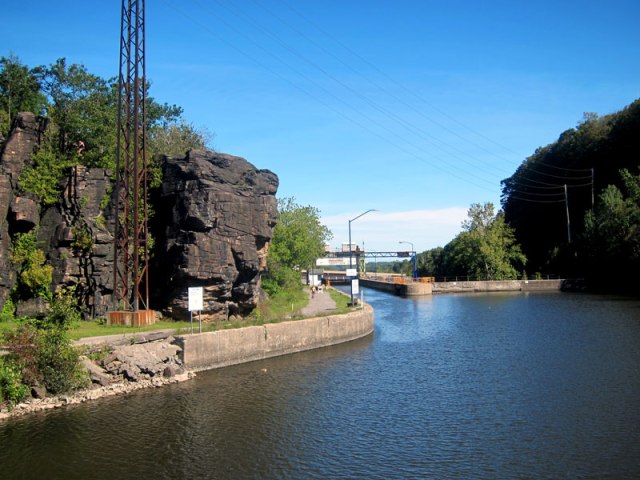 enjoy your way through with me, and once through look back at the lock

spotted many times on this trip, but this time I was almost fast enough to share this eagle with you.

at 4:12 PM I took this image of the Herkimer Home State Historic Site. I have visited this 1764 Georgian-style mansion twice learning the story of its owner, General Nicholas Herkimer, hero of the Battle of Oriskany, stopping the British advance from the west. 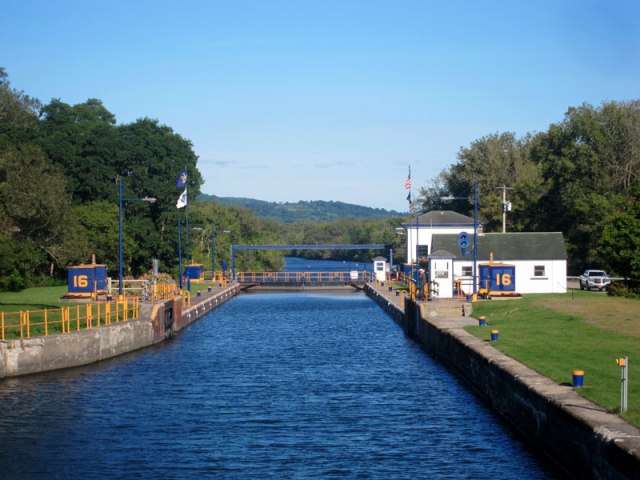 then almost seven miles to Lock 15 in Fort Plain

with Lock 15 is a moveable dam

another 3.5 miles, and another lock – Lock 14, Canajoharie in Palatine Bridge.

and a look at the movable dam

and, again once through the lock

and, then onto Lock 13 – Yosts, in Fultonville. If you are traveling west on the NY State Thruway you can pull over at a rest stop to see the lock and dam. It is now 7:50 PM, and getting dark. 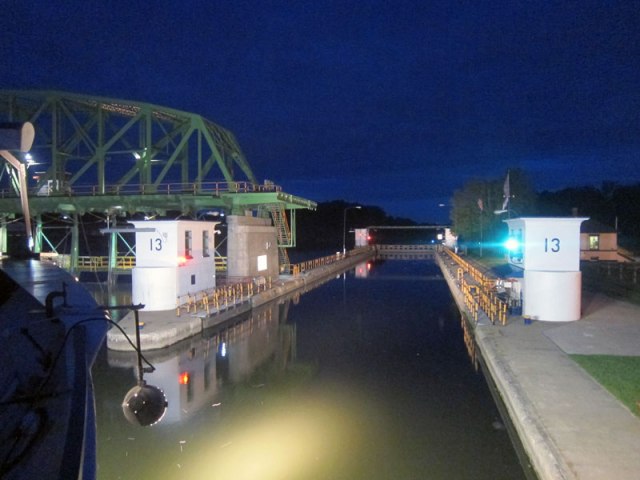 remember, we are VIPs, and the locks were manned after hours for us. 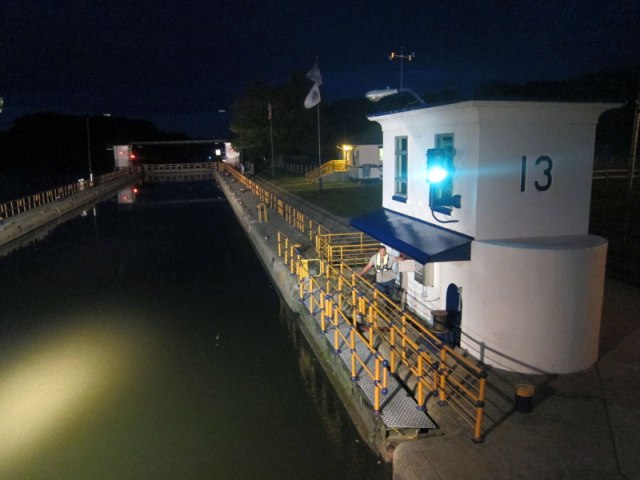 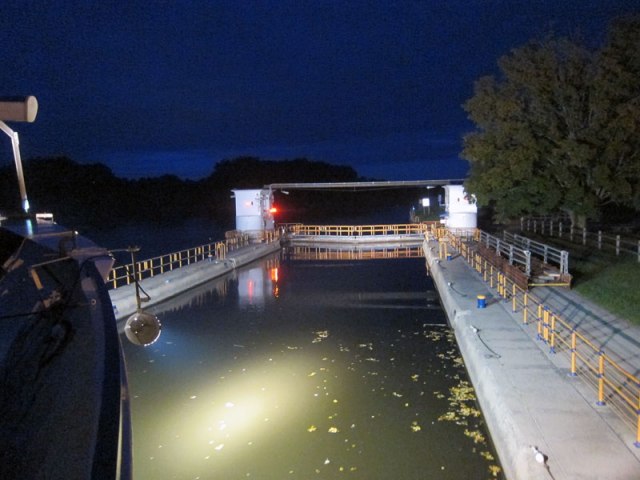 Where were you at 9:06 PM on September 13, 2019? I was approaching Lock 12 on the Erie Canal at Tribes Hill. This lock is just north of the fabulous Schoharie Crossing State Historical Site that I enjoyed in July.

and the moveable dam at this lock is one of only two moveable dams on the Mohawk River that have a highway across, and I drove over on this highway to visit the Lock. A young man in July, with pride, gave me a tour of the facilities he maintained. 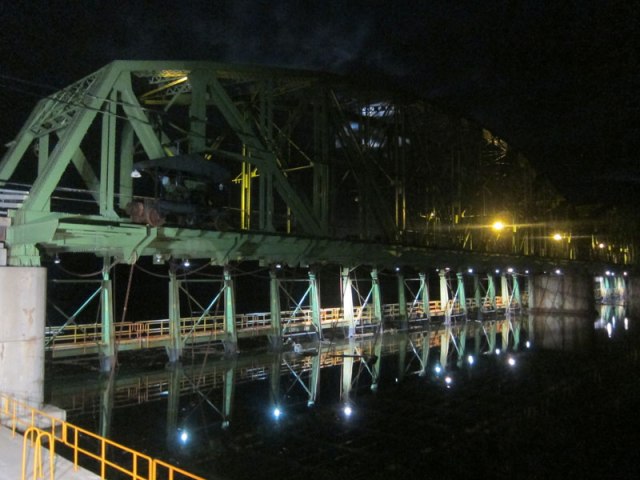 and, now passing through Lock 12

and, looking back to the dam and highway above 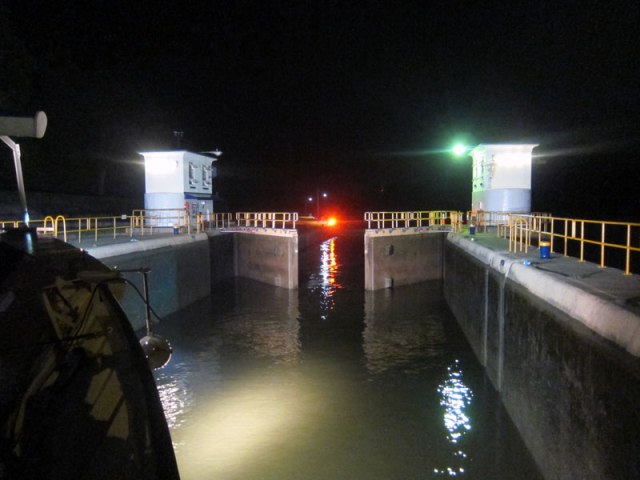 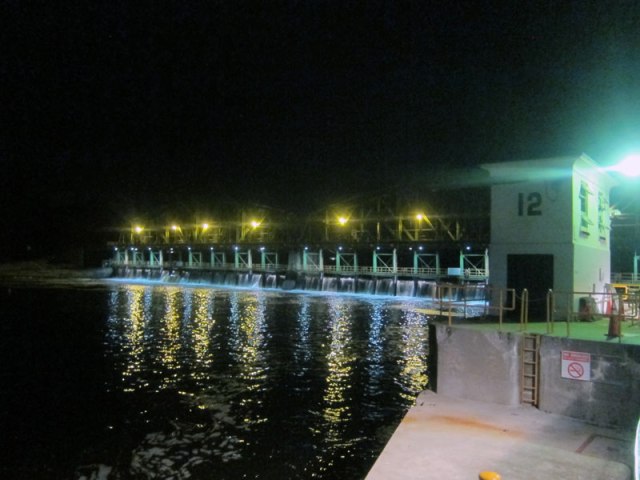 and, after a long day standing watch on the brow so as to not miss a thing, it was time at 9:51 PM to arrive at Lock 11 in Amsterdam where we remained overnight.

Coming next, the remaining locks on the Erie Canal to the Hudson River. Hope you are having fun with me. I love reliving this journey and sharing. As always, yours, RAY