Moving right along on my “epic journey” (complete menu at end of post). I arrived at Union Station in Chicago around 11AM on Monday 2 September (Labor Day) not much more than an hour behind schedule. I scurried out to catch a cab to Burnham Harbor where Blount Small Ship Adventure’s  Grande Mariner was docked.

I booked the early arrival ($150 for the overnight including meals), which is a bargain for being in downtown Chicago, but most important, I wanted to be there, and not pull it close to departure time on the 3rd. The early arrival package allows you to board at 5PM, but, I asked, and it was possible to drop luggage off earlier. That is what I did, and then my cabbie dropped me off at nearby Field Museum. The time on my ticket to the museum states 12:18 PM 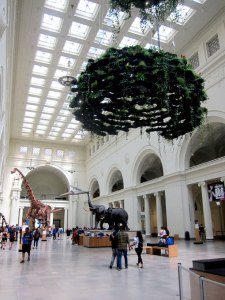 My great-grandfather, Franz Boas, was head of the Department of Ethnology and Archeology for the Chicago World’s Fair in 1893 (it opened a year late for the 400th anniversary of Columbus’ discovery). Following the Columbian Exposition, the ethnographic material he collected formed the basis of the newly created Field Museum, and he became the curator of anthropology at the museum. I had visited during my undergraduate work at Northwestern, in the mid 1960s, but did not remember the collections.

Both on my visit here for the afternoon, and my visit to the Museum of Science and Industry the next day, I was surprised, and pleased to see how museum exhibits have evolved. The same has happened at The Henry Ford in Dearborn, Michigan. No longer does the visitor simply pass collections with identifying labels. Stores of culture, and developmental history are related. More can be learned, and I would imagine there is greater appeal to the ‘new generations.” This panel may help explain.

Here is a gallery of society development. Just part, you get a flavor. I wish I could remember all I try to absorb. For easier reading you can click to open a gallery. 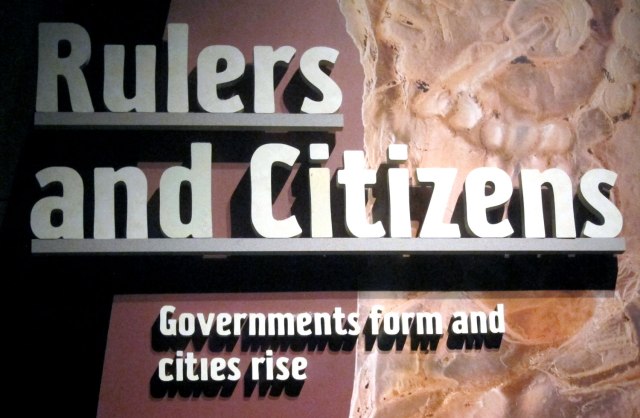 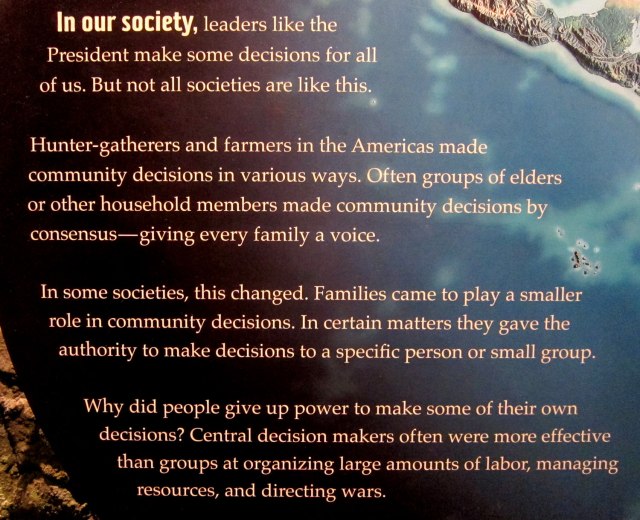 Gone are references to Indians and Native Americans.

Many halls exhibit items from the cultures of British Columbia where my great-grandfather worked to learn about and document the peoples. I am sure that much of what I saw he collected for The Field Museum and previously the Columbian Exposition, but no longer do exhibit labels provide that information as to when, where and who. Instead the cultural stories are developed. 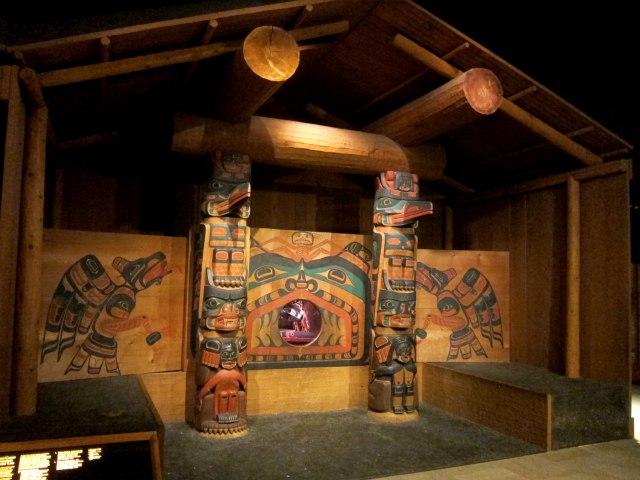 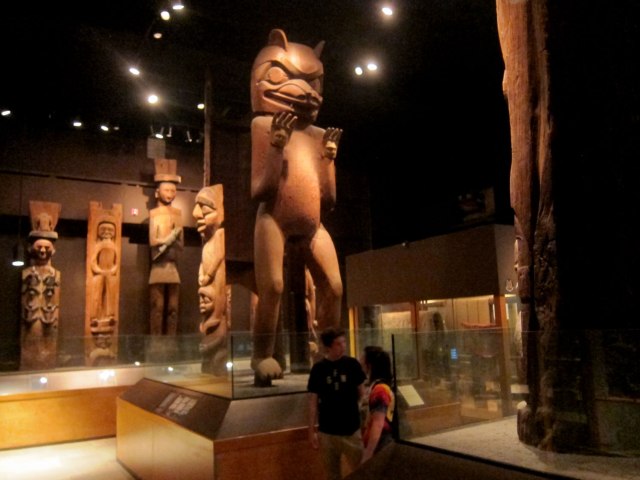 I enjoyed the geology exhibit (still have to tell you about my week of learning Connecticut River Valley geology at Historic Deerfield the summer of 2018). This exhibit on the Benld Meterorite was fun. The four pound meteorite crashed through a garage September 29, 1938 in Benld, Illinois. It went through a garage roof and the 1928 Pontiac Coupe parked in the garage, missing people by 50 feet. The Meteorite went through the roof of the car, the seat, the floorboards and struck the muffler of the vehicle bouncing back into
the seat springs where it was found. Bet this exhibit makes an impression on more people than just me.

and, then there is SUE. Named for the lady who discovered her, Sue is the largest and most complete T. Rex ever found, and arrived at the museum in 1997. Because of this specimen, we know more about this dinosaur than ever known before. 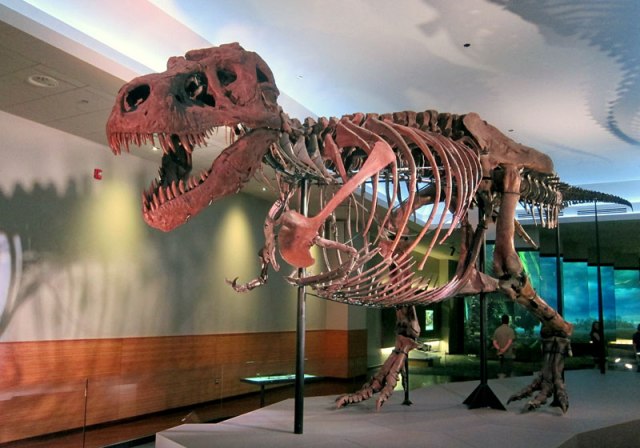 It was close to closing time at the museum, but more importantly close to boarding time for my early arrival. I began my hike south along the park and marina to the Grande Mariner, tied up just north of the McCormick Center.

and, looking back to “town.” 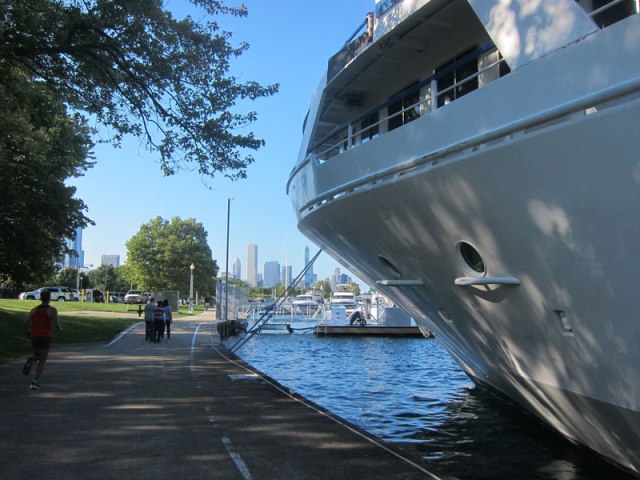 Jasmine, the cruise director, graciously greeted me and showed me around, and then to my cabin. My cabin location would be in the lower right of the image above, the deck below the port holes. In my phone discussions about cabin selection with Sandi at Blount she said, “well, I can give you 20A which is $1400 less, but has no window.” A cabin, a room, is for sleeping. I live in the common areas at inns, hotels, and B&Bs, and have done the same thing on the Queen Mary 2. “I will take it,” I told Sandi, “a room is for sleeping, I do not need a window.” Actually, I had more space than some of the other cabins, and was in a very quiet spot. You can open this gallery to see 20A – my cabin – lots of storage space, comfy bath and separate shower. 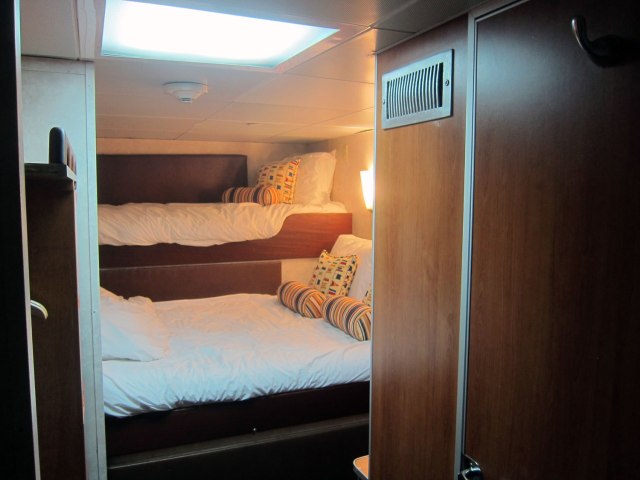 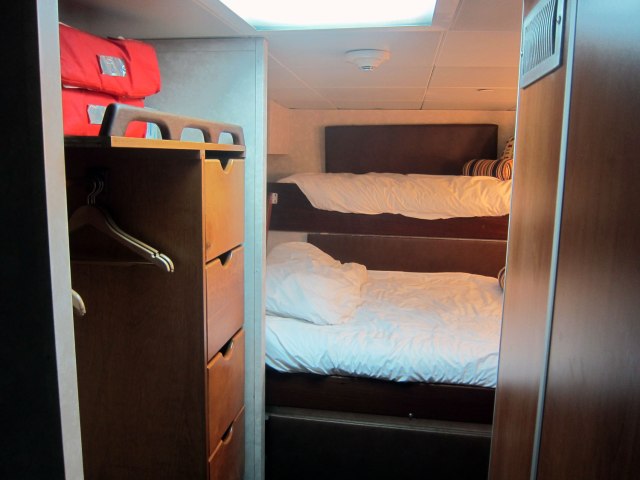 and, back on deck before dinner. Good I knew I was in Chicago, as it is not the skyline I remember from the 60s, and did not recognize – too much change.

My original thought for 3 September prior to departure on Lake Michigan was to catch the train to Evanston, just as I did during college, and traipse around Evanston. But with my “tired legs” and with memories enough in my mind, I decided I really had to revisit the Museum of Science and Industry in Jackson Park in the one permanent building built for the 1893 World’s Fair.

I walked over to a nearby METRA stop, and caught the local train.

Down to about 52nd street, and then walked over to the museum

I first walked into the massive entrance in the summer of 1963. I was a Naval Reservist on my way to Boot Camp at Great Lakes. I felt enlisting during high school would improve my chances for acceptance to the officer program in college – it worked. I was in charge of a group of fellows, and we flew to Chicago, and went to the train station, but had many hours before catching the train. Always needing to explore and “shunpike” (I really do not know where it came from) I headed to the museum that I had heard about (how I learned things before the internet, I cannot recall – it has been that long ago). When I walked, in uniform, into the grand hall with another fellow, the organist broke into ANCHORS AWAY. But entrance through the columns had been taken away.

You now enter out near the street, and head underground. It all had been changed. In reading a book I bought there on THE PIONEER ZEPHYR, I learned that in the 1990s a massive project was undertaken to create underground parking and exhibit space extending out from the entrance. Here the world’s first Stainless Steel Streamliner train was to be housed. A building was also built for the captured German U-505 submarine. The restored 1934 train was my plan rather than Evanston.

Again, the exhibits changed from static labeling to many interactive learning experiences. But, the Main Street was still there, and I enjoyed strolling through.

In the museum since 1949, and always a favorite, is Colleen Moore’s Fairy Castle  dollhouse. Do click the link above to read about it.

one of the most fascinating exhibits, and not something you would have seen decades ago, was FARM TECH. There was so much to learn, I wish I could go back and study for days. 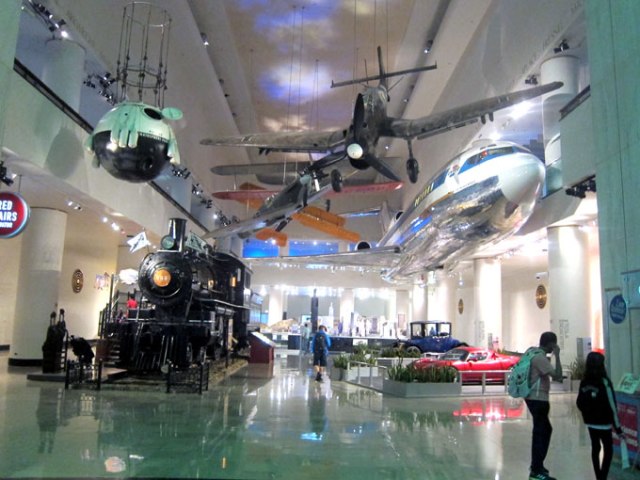 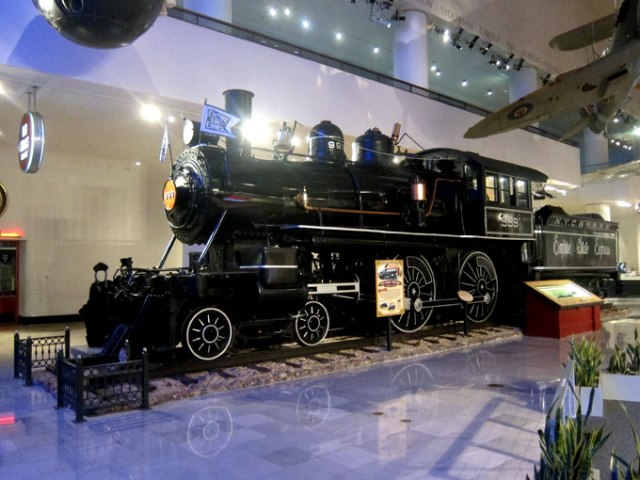 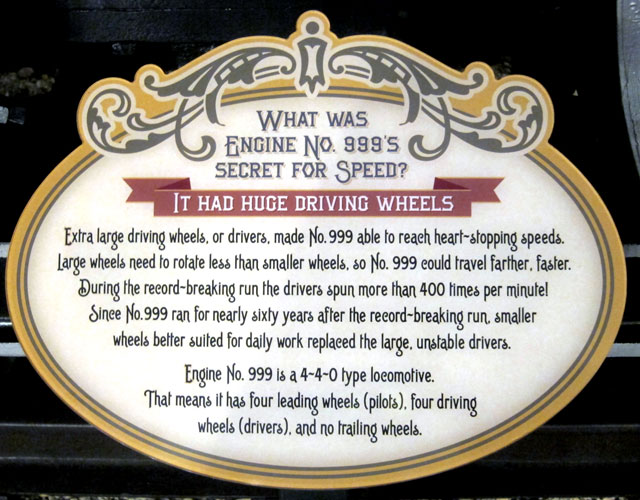 There are small tours given of THE PIONEER ZEPHYR, and only two on the day of my visit. I made sure to be on line to not miss out, even though our group ended up only being five. This is the new grand underground hall. Parking areas are on either side of the Zephyr’s display. 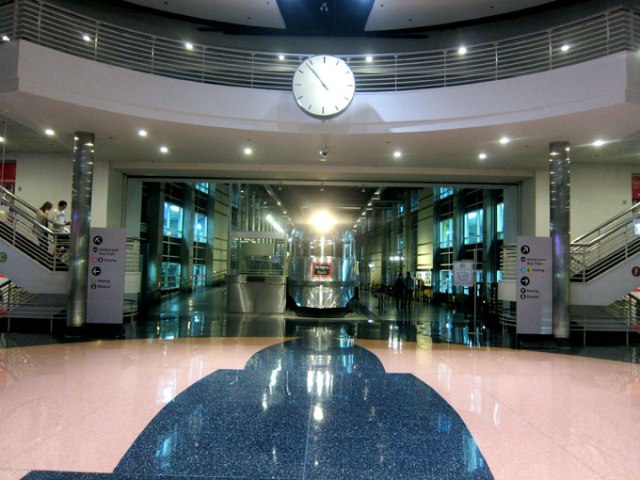 how can you not be overwhelmed with this Art Deco beauty???

Below is a gallery of the interior which was restored for the first time. Previously one could only walk around the outside of the train when displayed outdoors next to the U-505. The lead power car also contains the Railway Post Office, and Mail Storage. The middle car is for Baggage and Express shipments, a small, buffet and grill, and a compartment for 20 passengers – the smoking area. The rear car had 40 passenger seats followed by the observation lounge with 12 more seats. 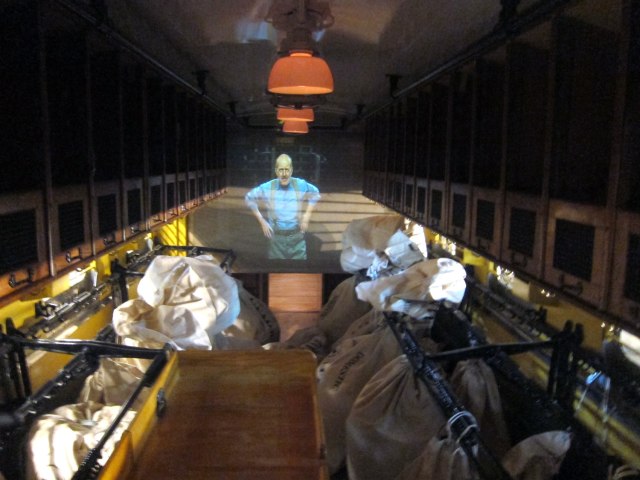 The RPO section of the power car. A hologram attendant explains what happened here. 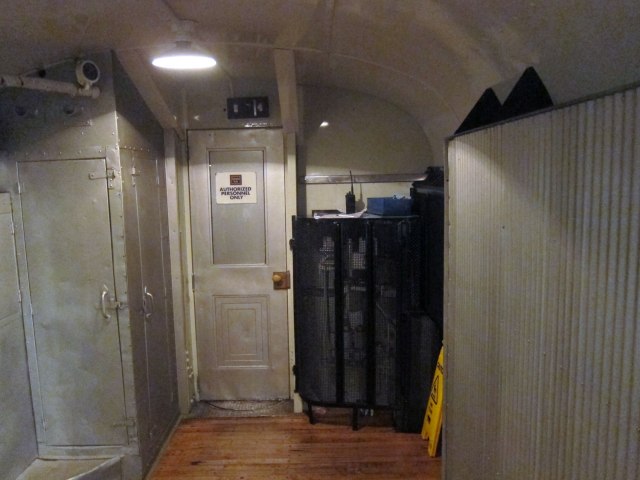 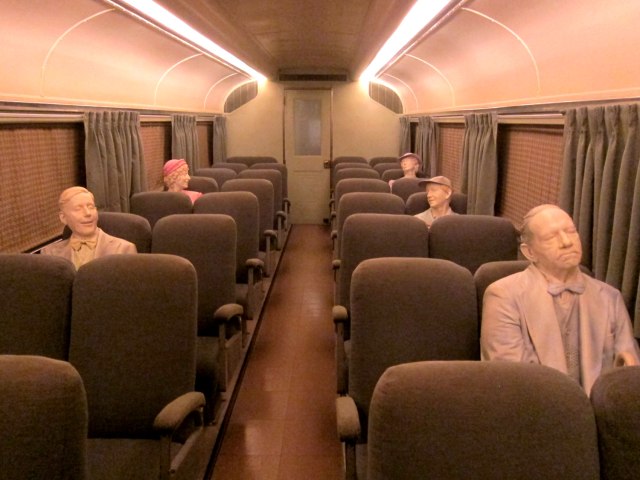 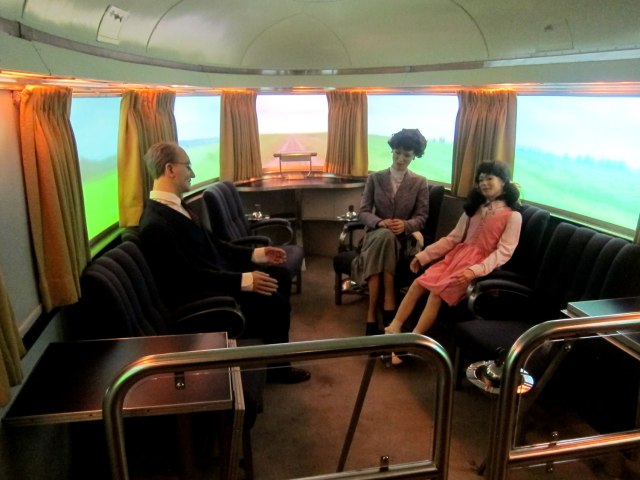 One of two bathrooms. Door is fully open. No way anyone in the 21st century could enter.

Also innovative were the articulated trucks connecting the cars. Great idea for speed and savings, but became impractical because a problem with one car will pull the entire train out of service.

How can you not love this stainless steel? I showed you similar Budd Company built cars on my Via Rail cross Canada trip years ago. So sleek and full of motion, even when sitting still. I bought a book about the train and it is fascinating all the new procedures developed in the train’s and stainless steel manufacture. 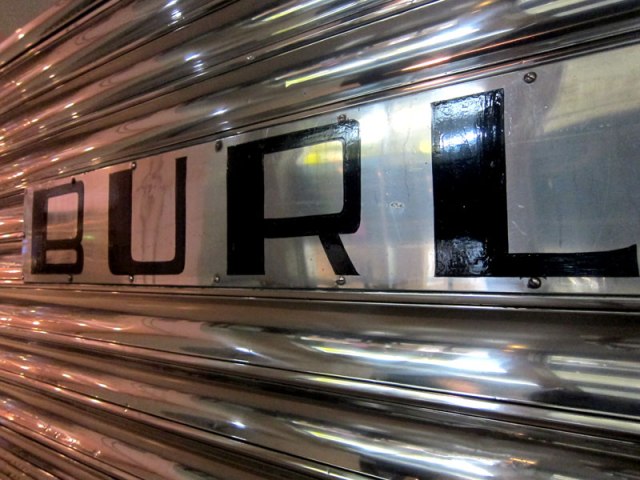 And, finally the Diesel engine (newly developed) and the “operator’s cab” 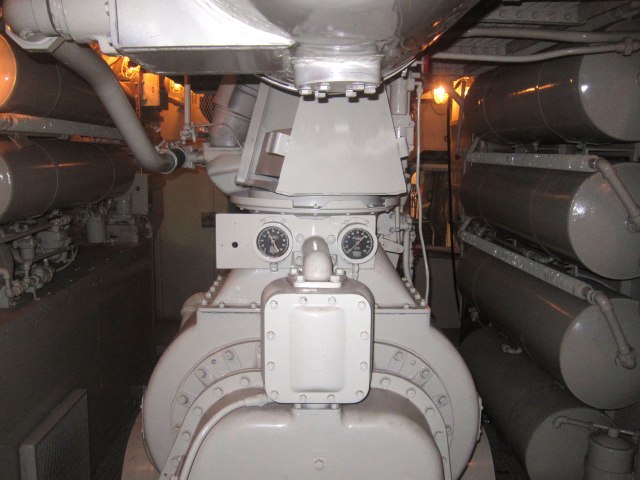 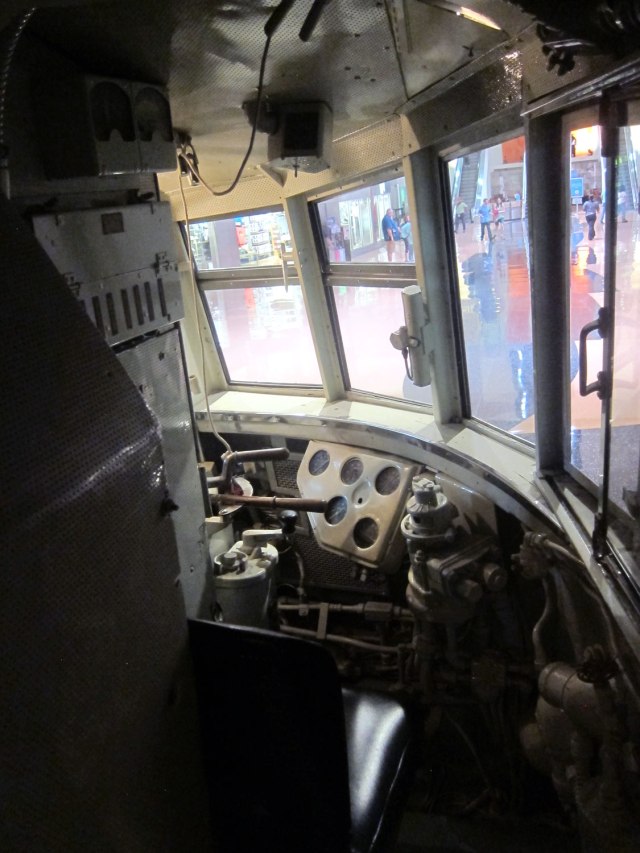 An extra plus for you here. About 15 years ago I bought a massive early railroad collection for resale, but kept a few items. Here is my original booklet given out at the 1934 Century of Progress in Chicago for the introduction of the BURLINGTON ZEPHYR – THE WEST WIND.

here is an interior view showing some original photos and part of the train’s plan.

In my next post I will get you underway and sail north on Lake Michigan – yours, RAY