We are close, very close, to LOCKS, LOCKS and more LOCKS – just two more days. But first there were port visits in Cleveland and Buffalo on Lake Erie. Leaving Wyandotte, Michigan about midnight on 7 September, the GRANDE MARINER headed east across Lake Erie, and began entry down the Cuyahoga River for our Cleveland stop about 7:30 AM on 8 September. 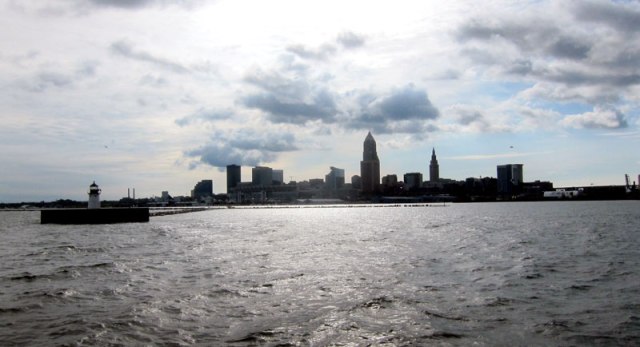 then into the river with many of the crossing bridges

and the “skyway” over the river. Believe below to be Routes 6 and 2 into downtown. 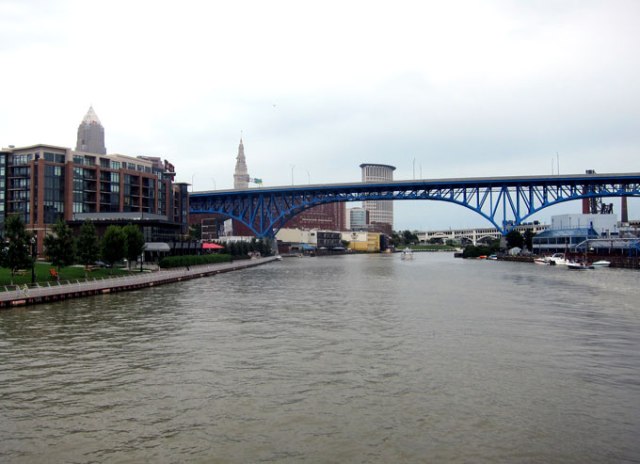 coming down the Hudson River I will share many “under the bridge” images, but first “under the Cuyahoga River bridges.” 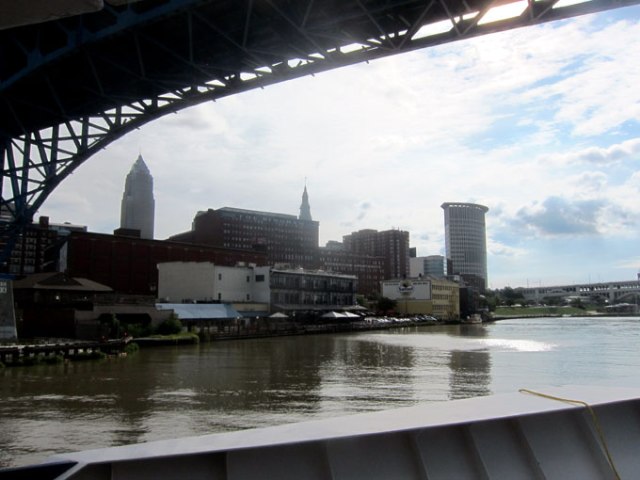 above looking south with the Terminal Tower the left hand building, and then looking back towards the lake. 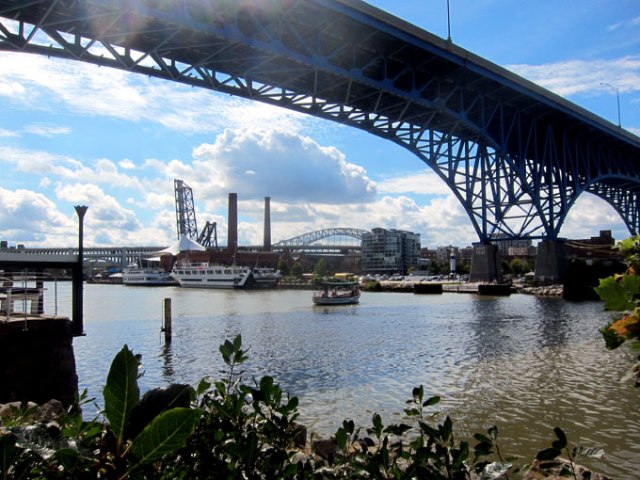 In Cleveland until about 5PM there was an optional city tour that I booked, but first I had time to catch the free water ferry across the river. I got to see the local train transit system…

and chat with these nearby tailgaters. It was opening day for the Cleveland Browns. It was walking distance to the stadium (for legs younger and abler than mine), but many folks rent a parking spot and just party and play games. Arriving at 7AM for their spot, this group had their generator going and were watching pre-game festivities, planning to stay here all day. 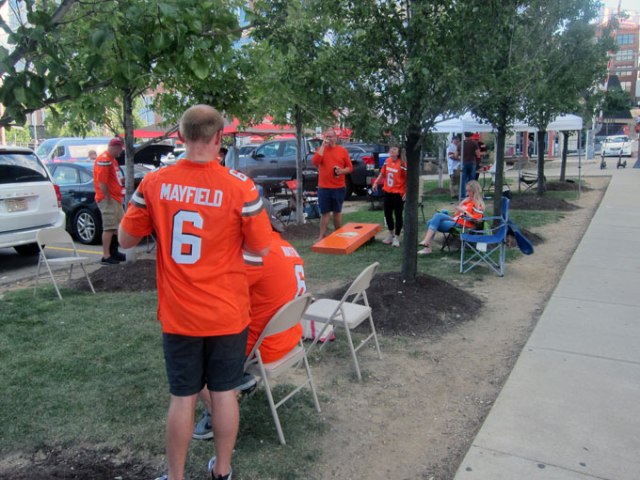 It was then board a bus for the tour. It was nice to have a mixed flavor of the City of Cleveland, and here is some of it I can share with you. At several spots there are signs welcoming you and providing photo ops.

and, what do you do on Christmas for 24 hours? Watch CHRISTMAS STORY I hope. Here is Ralphie’s house – yes for real, and I just got the LEG LAMP in the window for you as we cruised by in this small neighborhood. 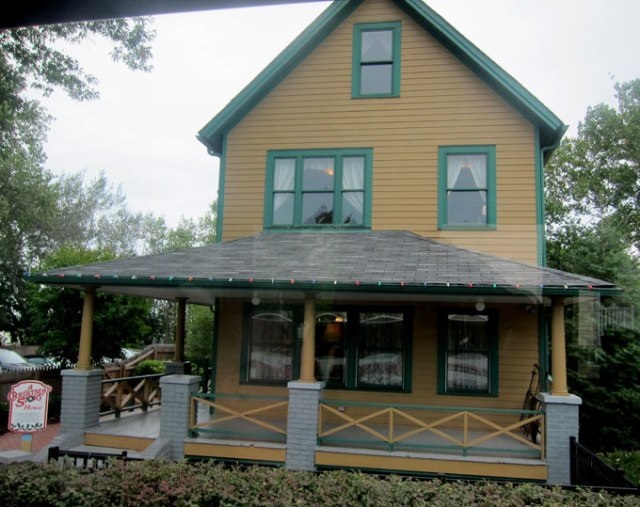 across the street is now a CHRISTMAS STORY Museum, gift shop, and the Bumpus House. A Christmas Story House & The Bumpus House are available for overnight stays. 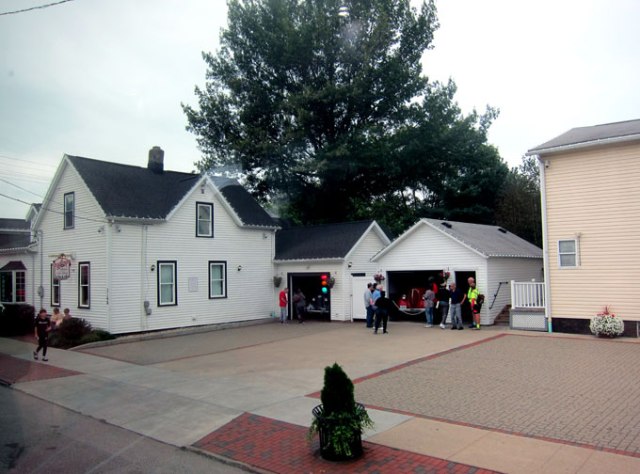 Cruising to the center of town it was disheartening to see the classic downtown department stores – Higbees, Mays, etc. – closed, but at least buildings are still there and being repurposed. Higbees is a casino (Jack). and adjoins the Terminal Tower, the deco old train center and early “mall.” 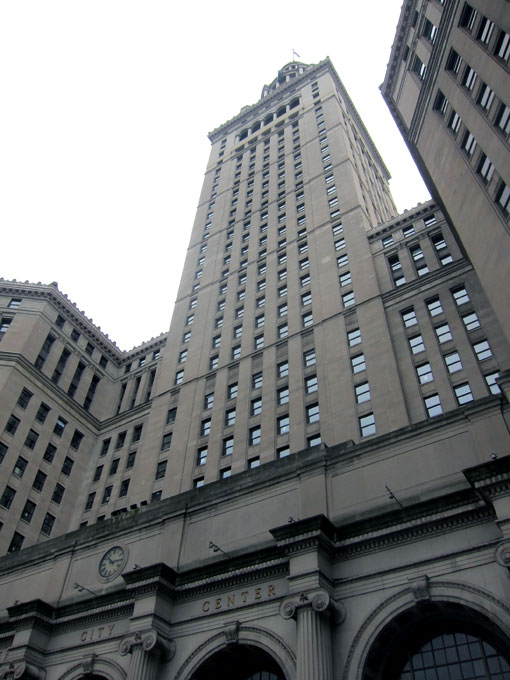 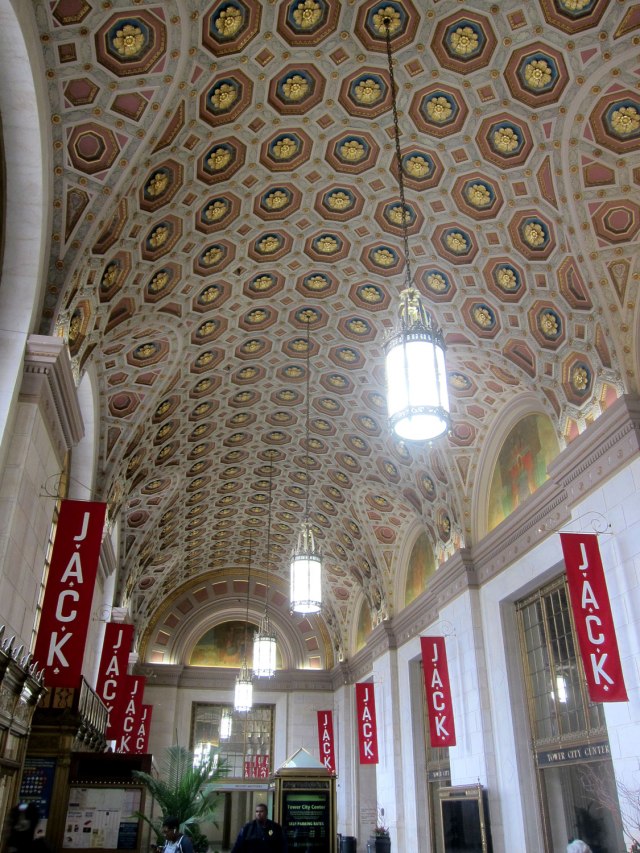 A “saved” train board.

how often do you see this anymore? 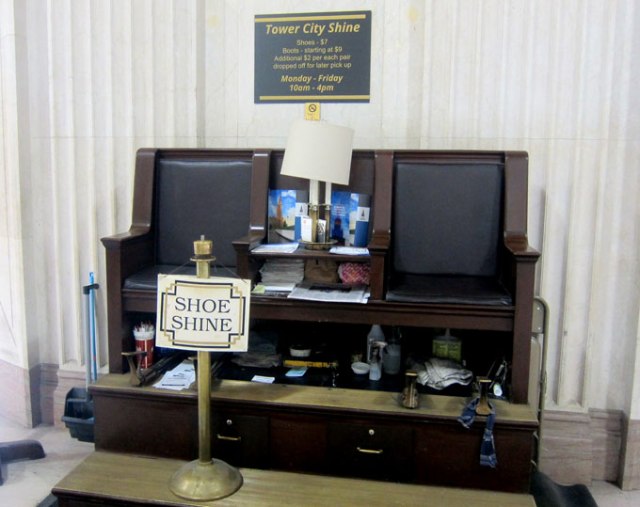 and then it was a drive to the Rock and Roll Hall of Fame, and about 15 minutes to run inside.

outside is Johnnie Cash’s bus

and, next door to the west, also almost on the water, is the stadium, packed with sad Brown’s fans. Yes, it was an overcast day also.

We then were driving along the water, through a park to the art museum, again having about 25 minutes. From what I ran through to see, definitely worth some time in the future. 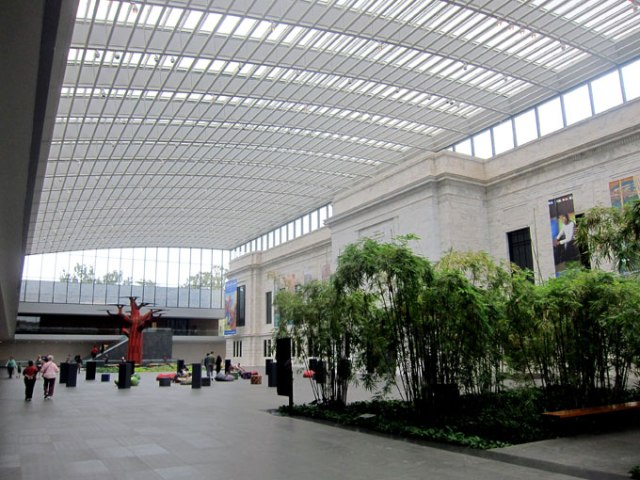 not quite “Cinderella Liberty” in Cleveland, but we were underway at 5PM heading back to Lake Erie to head east to Buffalo.

Due to arrive in Buffalo at 9 AM, I did not want to miss the approach. Up early, here is sunrise over Buffalo, New York, at 7:03 AM on Monday, 9 September. Feel free to click for a larger view. 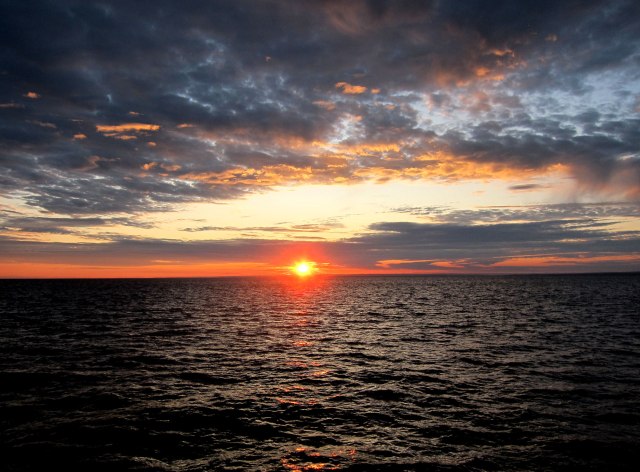 and, to put things into perspective, here is the nautical map (with my ship in green) at this point in time. Take a look at Welland, Canada, for future reference.

by 9:30 – 10AM we were approaching the skyline of Buffalo – you can click for full screen view.

I hope you remember my week in Buffalo in May – if not, check out my three posts of that grand time – especially CITY OF LIGHT. There is so much I told you that I still want to do here, but the one day we had in port would still not be enough. The optional tour for the passengers was the day at Niagara Falls. You know how I feel. The 19th century tourist attraction beauty has been spoiled, and I had no desire to go back. So, off I went on my own, doing something I had not gotten to in May. By 11:30 I was walking towards the Buffalo & Erie County Naval & Military Park and eventually to my destination at Canalside.

I had some time to look inside at the museum again. Lots of information, but I thought I would share these two panels with you. You may click to enlarge for easier reading if you would like.

But my mission for the afternoon was to catch the 1PM Buffalo River History Tour, Here is an early map of the area. Much is filled in now, but the Erie Canal begins at commercial slip, and the river tour dock is on Prime Street now filled in, as is much of the area, but you see the entrance to the Buffalo River (Harbor) also.

I wanted to see “the largest grain port in the world and experience the nation’s largest collection of standing grain elevators from just a few feet away” – quoted from the company’s website. Leaving the dock we swung right past the original start of the Erie Canal. To the left you see the stern of the USS Little Rock CLG-4, and then to its right the nautical museum and the outside seating for the restaurant. 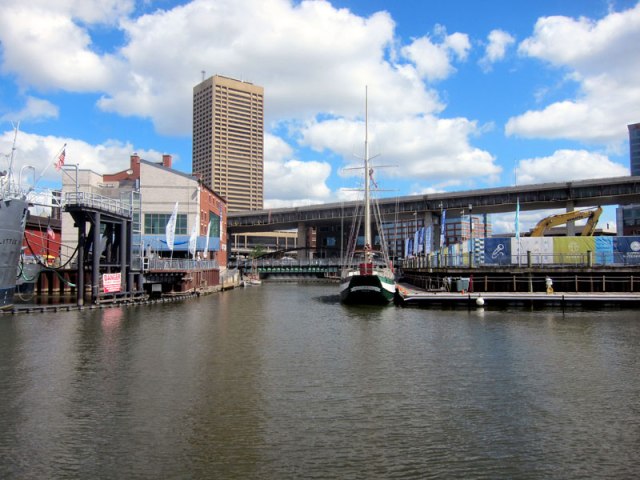 and, then it was down the Buffalo River. 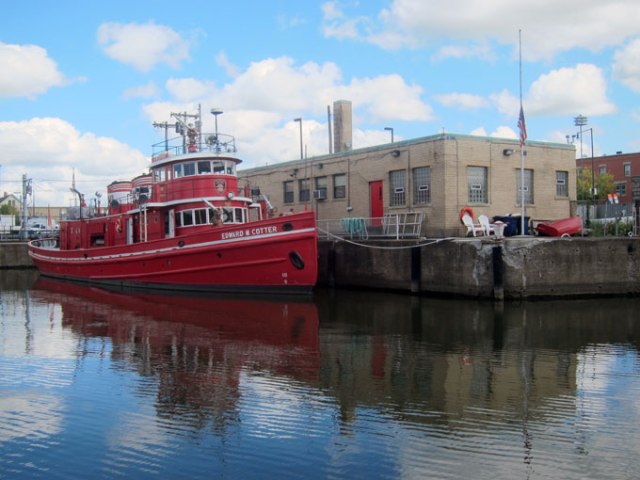 and, make sure to open up this gallery of silos – just amazing to see, and fascinating area. I need to learn more. 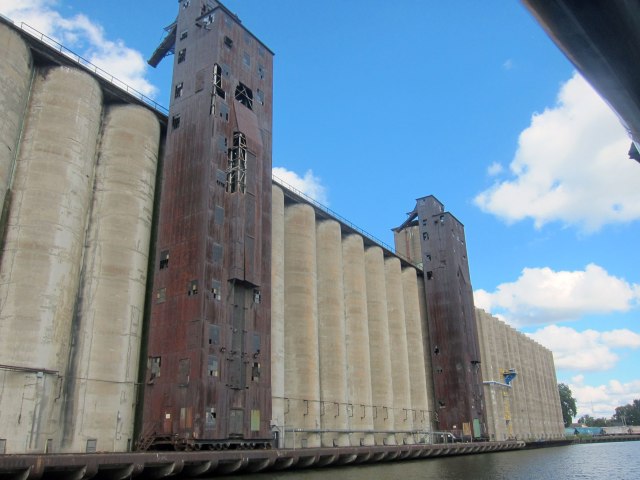 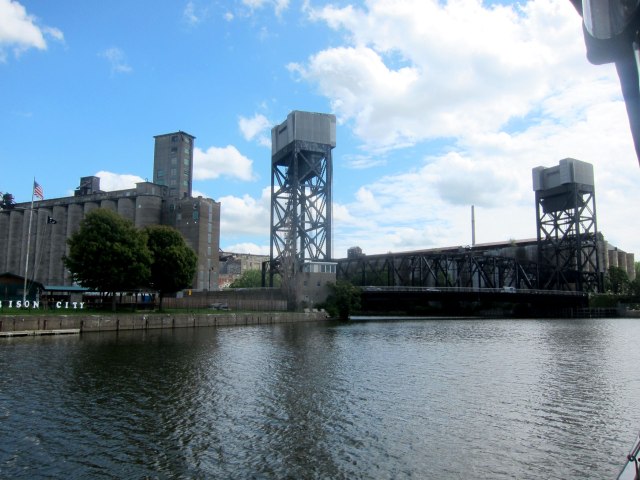 Hope you see the SS COLUMBIA, built in 1902 directly above. It is the last remaining excursion steamer of that period – hopefully to someday be restored.

coming back out of the river, the tour headed out past the nautical museum and Little ROCK and submarine, past the lighthouse at the entrance to Buffalo, and then swung back into dock.

I then walked back to the restaurant at the museum, but loved finding this

and, turning around here is the original Erie Canal entrance (warehouse sites to the left) looking to the Buffalo & Erie County Naval & Military Park 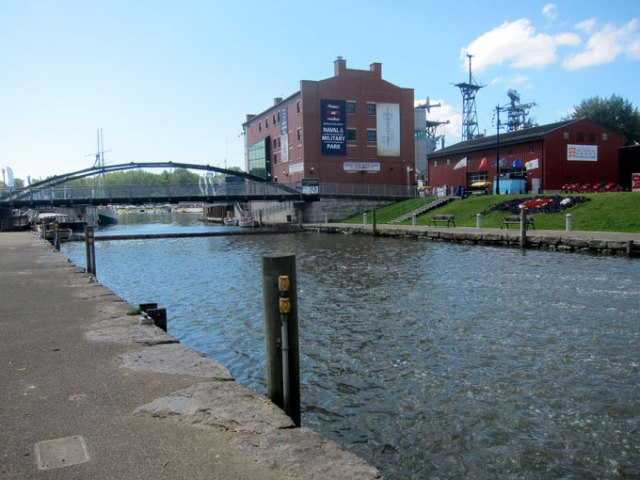 may I recommend having lunch at the restaurant there 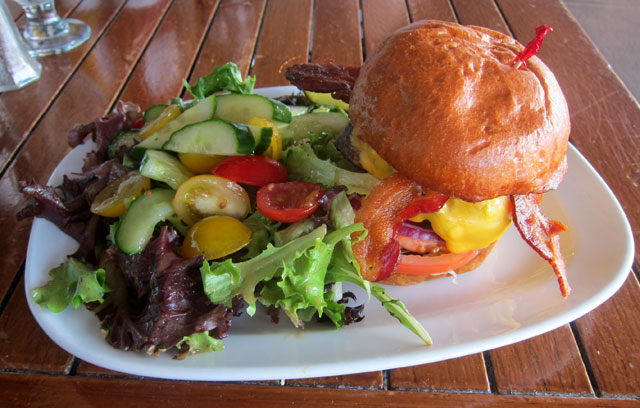 Having been on the USS SULLIVANS DD 537, and many submarines, I decided to conclude the day touring the USS LITTLE ROCK CLG4 – the third ship docked at the museum. I was disappointed. It was interesting seeing the missile house (one space I never saw on my last ship the USS LUCE DDG-38 due to security), but the remaining part of the tour the various spaces had been stripped of their original uses and now serve as a number of memorials and displays. Nice, probably good memories and fundraising, but not ship spaces as originally outfitted.

I walked back to the GRANDE MARINER, for dinner and the evening, and early turn in. I was not going to miss the early departure from Buffalo and the 7 AM arrival for the Welland Canal.  Now leaving the LAKES, it is finally time for LOCKS, LOCKS, more LOCKS, and BRIDGES. Hope you continue to “sail with me.” As always, yours, RAY