The Story of LADYRAB III

I am still “on top of the world” and even more excited with my “new” 1965 Airstream Caravel travel trailer – now LADY RAB III. The learning will never cease, and I have found a wealth of information on-line with fantastic websites devoted to the “Airstream Family” to assist in restoration, care and enjoyment. Not to mention the decorative accessories to time travel back. The Airstream “family” is amazingly supportive, and my postings on the Facebook page – Airstream Restoration – has already brought me some answers. And, another plus are great friends Scott and Betty in Pennsylvania who have been supportive, helpful, and have put up with my emails and calls. OOPS Had to stop typing – Betty called, I read the above sentence to her and she replied, “gladly put up with my calls.”

Earlier in the week Dewey moved LADY RAB III to his home and shop, where she could enjoy expansive views of the Vermont hillsides. I visited them both on the 27th, and Dewey and I discussed his operation on her derriere, and additional projects. This is what I had to look at coming up his drive.

Dewey and I spent a great deal of time discussing projects, which I will detail below. But when he had to run off for some parts for a car he was working on, I stayed and explored though LADY RAB III – something I had not done when I bought her in a dark garage after a few moments visit last week on the 20th.

This first view is sitting on the front couch, looking back. I had put up one of the tables. The black upholstery and non-original black painted cabinet doors was probably done by Lisa (owner once removed). She told me her “Toaster” was outfitted in a pirate theme for her sons and nephews.

note the compartments under the coach which slides out to make a bed. Black tiles over the original flooring – pirate theme, of course. 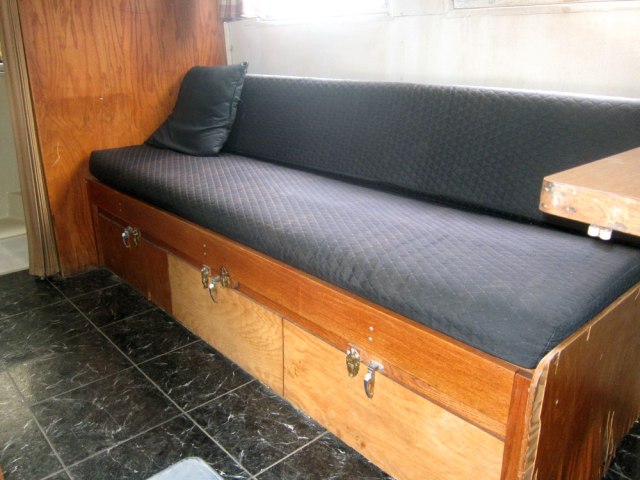 This is the sofa/bed at the front end. What you see upon entering. I was sitting at the far right end. 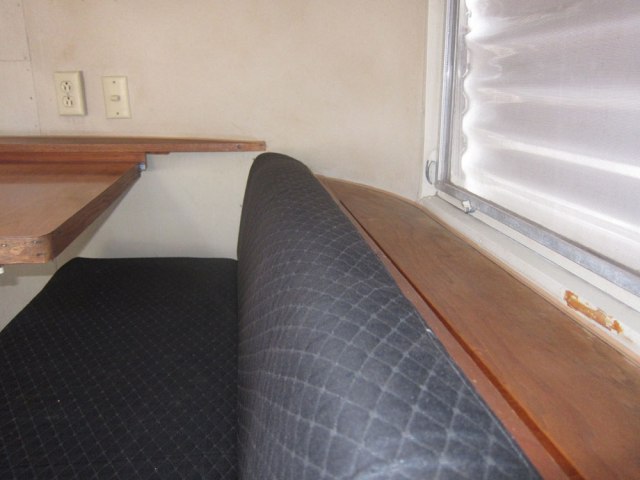 Now looking forward to see a full front view. The little lights are 12 volt for when you are “off-grid.” In RV terms that is boondocking. The bracket is for a TV, and a cable comes from the outside that was probably attached to a whip antennae. I guess even young pirates will sometimes need light entertainment. I bet Lisa may tell me when she reads this.

A table can be set up on each side. Tight for leg room. Not the layout I would have liked to have had – BUT – I have a great enjoyable piece of history here, and will adjust since I am flexible. But design of the outside space is where most enjoyment will be (see last image. below)

I pulled the side bed almost all the way out. Yes I have size 12 feet.

I only folded the front bed part way out. Happy to see the shelf behind for 1960s appropriate tchotchkes.

on the curb side is the kitchen. The refrigerator is a replacement and stands above the original cabinet height. In the long term, another search and fix to get back to original. 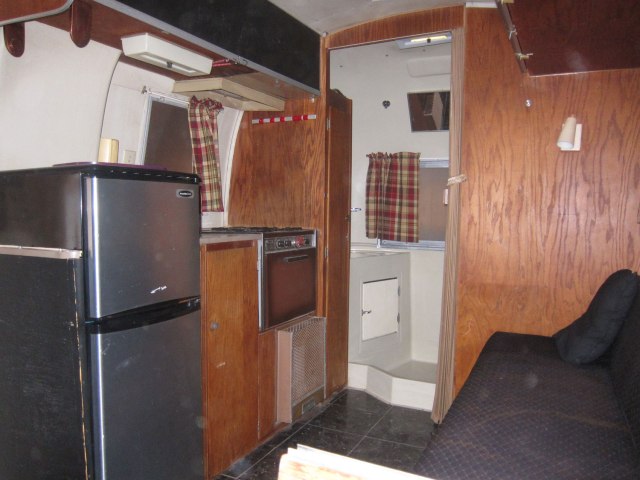 again, looking back at the bathroom

looking into the bathroom

now, what is that in the image below, and why do you want to see it? In one of our many emails, Dr. Dewey told me there was a problem with the Black Water Tank drain. Yes, you may be able to guess what goes into Black Water as opposed to Gray Water. Well, unlike newer or larger trailers, the 1965 Caravel only has a Black Water Tank, and this is not how the outlet should look. Also, the lever to open the dump valve is lacking. The fellow I bought the trailer said everything worked, but in a later phone call said he never hooked up the sewer line. Obvious now the previous owner only plugged in for power. Dr. Dewey said he would see if he could repair and make the drain work. Well, with all the great on-line resources I learned so much about this tank and age problems. One person even dropped his and had only unrecognizable pieces. I found detailed instructions on how to remove the tank, and an image of how it slides up into the closet for removal. Thinking removal and possible replacement best, I may have found a company that can supply the tank. Remember, if it can be fixed with money, it is not a problem. In this case we will probably be ahead trying to replace than fix. Dewey agreed in an email reply. Still on our discussion list. If you would like to receive a long dissertation I found on Black, Gray and Potable water in Airstreams, let me know and I will email the PDF. By the way, my brain synapses are moving so fast I am getting younger rather than older.

And, the closets, one on each side to the entrance to the bathroom. For privacy while in the shower or on the toilet there is an accordion screen – yes right out of 1965.

Sliding the side bed out, and pulling back the mattress you can see some electrical apparatus and the water pump. There is an access panel curbside to plug into house current. Scott, looking at the schematics, I think where the electric cable is coiled up is where the battery goes for boondocking power. Will have to investigate from the outside to follow the wires and read the switches as shown in the Owner’s Manual.

Reading somewhere I learned there were tubs under the couch beds. Figured I would have to find them somewhere for originality. Well, opening up the doors I was pleased to find four of the original tubs remaining. And, on the side there are slide out drawers they rest on.

Now to the projects. Getting rid of the extension and moving the bumper back to where it belongs was priority. But how far out exactly should it be? Dewey had found the bumper may have been hit at sometime, a section cut out and then shortened. I can live with that, only about two inches on each side, and will be noticeable only if you back another trailer up to compare. Posting on the Airstream Restoration Facebook page, within twelve hours three people sent me images with tape measures in place. I also got additional information on the lid that covers the hose box that Dewey will fabricate. It will look great for sure. So as not to overload Dewey’s email box, I have held back sending all the images until he is ready.

Now, the tongue. Don’t you like all the “sexy” technical terms? See the bar going side to side? There was also one on the rear. A wrench goes onto the pin sticking out, and you crank down feet to stabilize the trailer when parked and occupied. Not original, and ugly. Upon my arrival Dewey greeted me and said, “what to you want to do with it?” “Ugly,’ I replied, “it could go away.” He was thrilled I said that, “consider it done.” We agreed the extensions were bruised shins or broken knee caps waiting to happen. But when inside I did notice movement, have to do something. 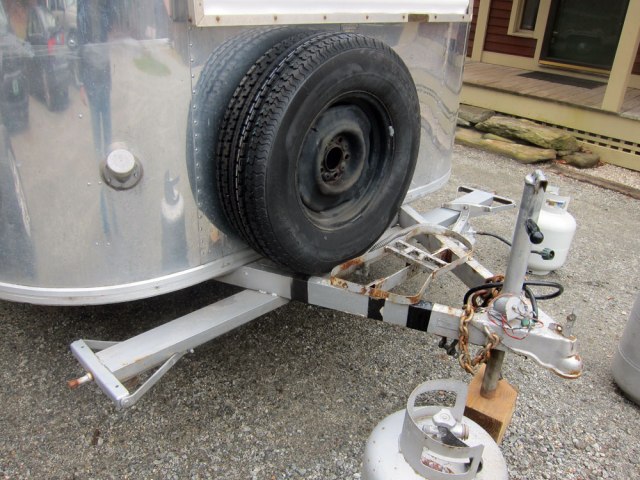 Well, that something came easily following a long conversation today with Scott. Shortly after he sent me a link to a trailer supply house with vintage looking aluminum stabilizing stack jacks. I checked the site, then checked Amazon where the same exact set was about 34 cents cheaper (at $35.52 for the set), and with free shipping. My set of four arrives December 1st.

Propane tanks – had been remounted at some time back further than the original. Dewey said the poorly made bracket should go, and a new one put back in the original place. Then we can mount the spare between them and the body. Originally not coming from the factory with a spare, I have seen many restorations with the spare mounted there. If you have it, you will never need it. And, the tanks? One is dated 1971, and Dewey said no one will ever refill them – so for safety, etc., new tanks are “on the list.” Below are some additional wires, and I think a “suicide switch” in case there is a break on the tongue. 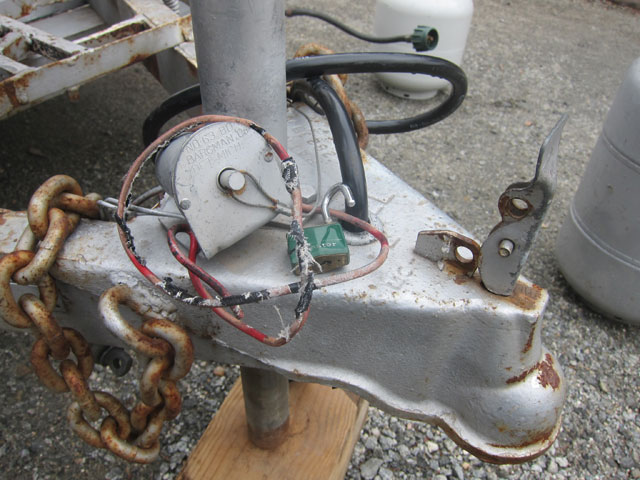 Well, over an hour and a half I played and explored my new toy, time to go home. “But wait,” cried LADY RAB III, “even though Dewey’s views are great, I want to come with you.” 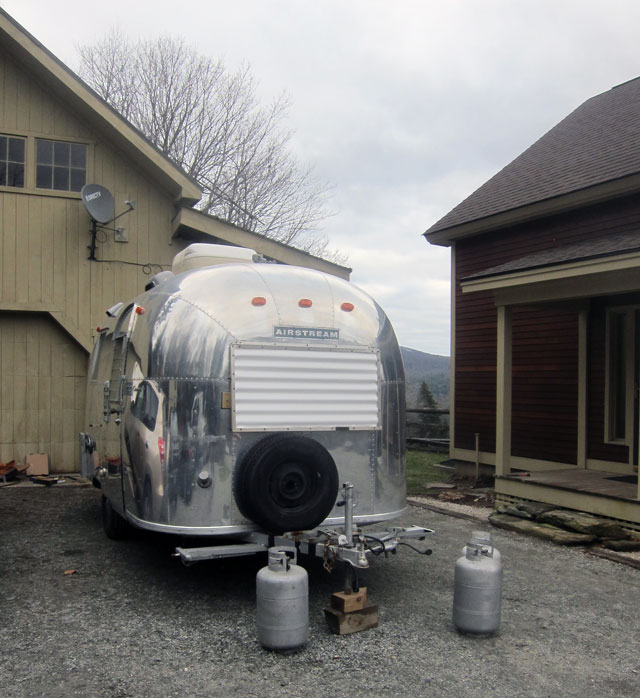 Was about to hook up — but in time.

If you made it this far, thank you. Remember I am documenting for myself, and the next owners down the line of this Airstream treasure. But you know I love to share. And in googling 1965 Airstream Caravel I am hoping that other owners will be in touch.

PS – If you have not seen my previous story of this wonderful acquisition – CLICK ON THIS LINK.

PPS – Yes, I am curious, and while just now (Sunday, 29 November) reading an Airstream history book I needed to know, “why Caravel.” And, this is what I found – “The Airstream Caravel was first introduced in 1956 and continuously appeared in our lineup as a lightweight, nimble option. The Caravel name comes from early European sailing ships specifically good at sailing windward.”