I have wanted to visit Johnstown, Pennsylvania, to experience the site of the May 31, 1889, flood since I read David McCullough’s The Johnstown Flood in the 1970s. This, his first book published in 1968, launched his writing career gaining him two Pulitzer Prizes. The opportunity finally came about, and I left home about 6 AM Saturday the 13th, arriving about 530 miles and 8 1/2 hours later at the Johnstown Flood Museum.

Originally the library, it was refurbished after the flood by Andrew Carnegie. The buildings across the street (below) also are survivors from the flood. 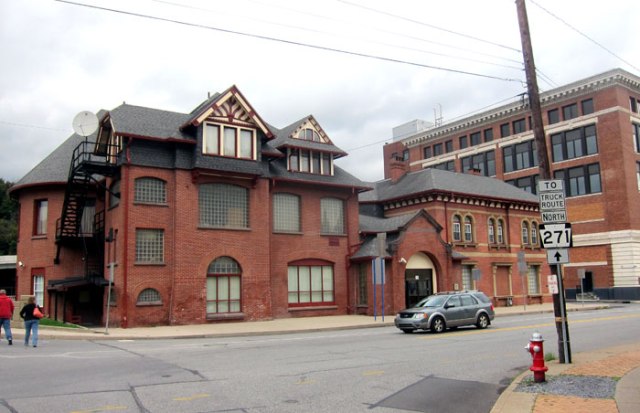 A company town in 1889, over 7,000 workers were employed by the Cambria Iron Company. An important rail center, earlier Johnstown was a canal center beginning in 1834 with the completion of the Allegheny Portage Railroad which united the eastern and western sections of the Pennsylvania Canal by creating a number of inclined plane stations to haul canal barge sections on train cars over the 2,291 foot high point of the Allegheny Mountains that separated Hollidaysburg and Johnstown. As was common in canal building for low water periods, a dam was built at South Fork, 14 miles from Johnstown, to create a reservoir to supply water when needed to the canal system. When the Pennsylvania Railroad was completed across the state in 1852 it made the canal system obsolete, and the newly finished South Fork Dam went into neglect.

I started (as I usually do) with a wonderful introductory film, and then toured the main floor exhibits. Not much there, but a solemn tribute to the 2,209 lives lost in about 10 minutes as the 40 foot wall of water swept through the valley. This display showed souvenirs of this news sensational event that captured the world’s attention.

See what looks like a bottle in the middle? It is a “Memory Jar.” A popular fad during the late 19th century, On this bottle the Overdorff children affixed relics of the flood to the bottle with red sealing wax.

You know I like to share things you probably know nothing about – and I didn’t either. 310 pre-fab houses that were heading to the Oklahoma Territory for homesteaders were instead shipped to Johnstown for shelter. Manufactured in Chicago, the 1 1/2 story “shanties” came in two sizes: 16 by 24 feet and 10 by 20. One survived to this day, and was relocated outside of the museum.

This surviving example is significant showing the living conditions of an affected worker after the flood, and as an example of one of the first examples of ready-made housing in the US.

It was 5PM, so I headed to my B&B, got settled, and asked for a dinner recommendation. I wanted to ride the Johnston Inclined Plane, built in 1890 and the steepest vehicular incline in the world, and my hostess told me her favorite restaurant was at the top of the incline. Off I went. 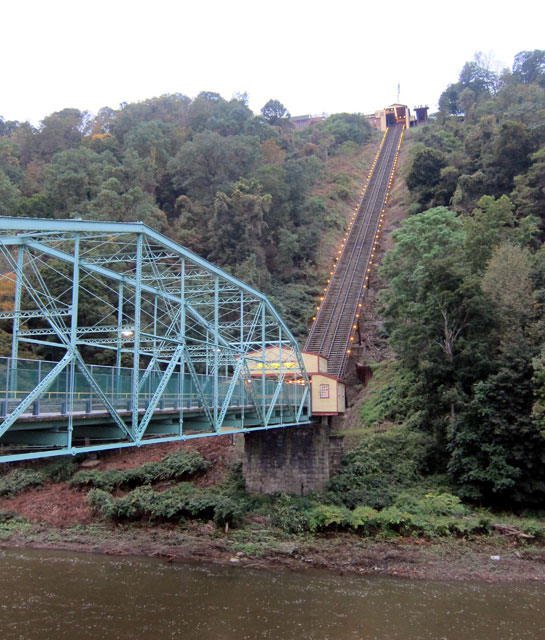 when originally built, the large car was double decker with room for horses, wagons and carriages on the main floor, and passengers on the second level. Now there is room for two cars end to end, and a passenger room on the side. 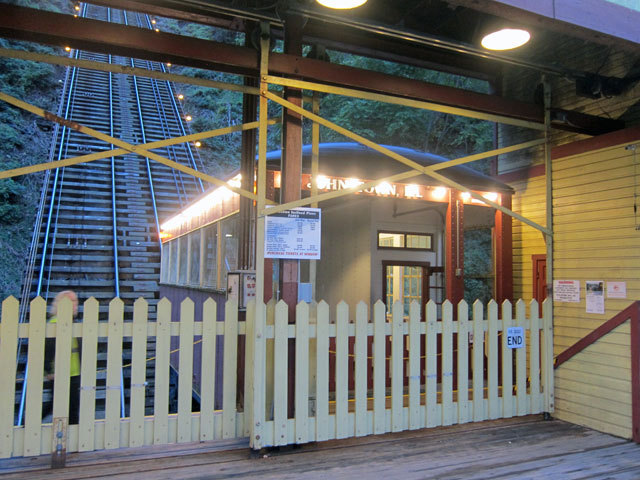 and up I went

Chatting with the hostess at Asiago’s Tuscan Italian restaurant atop the mountain, I was seated at the best table overlooking the dining room and city below. 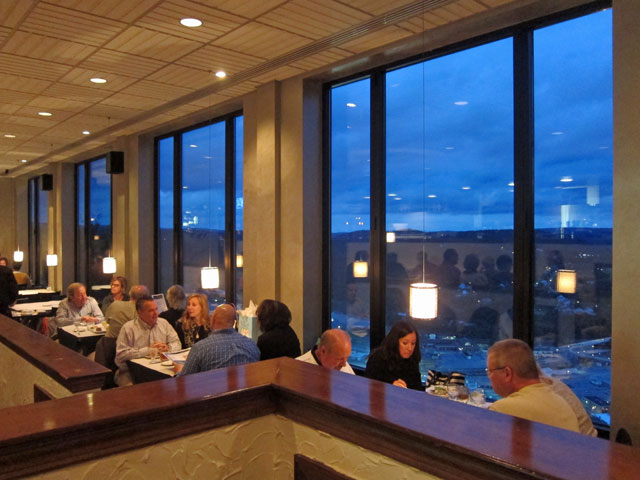 The operator of the Inclined Plane told me I had better have the bubble bread appetizer which I did – AMAZING, and when looking at the menu my choice was simple – Tuscan Chicken. You may know my daughter-in-law is Tuscan from Cortona. 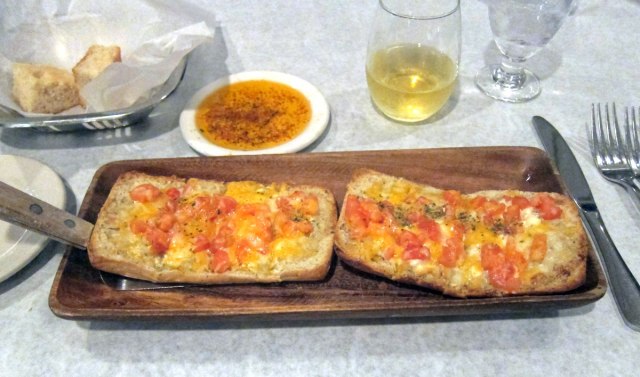 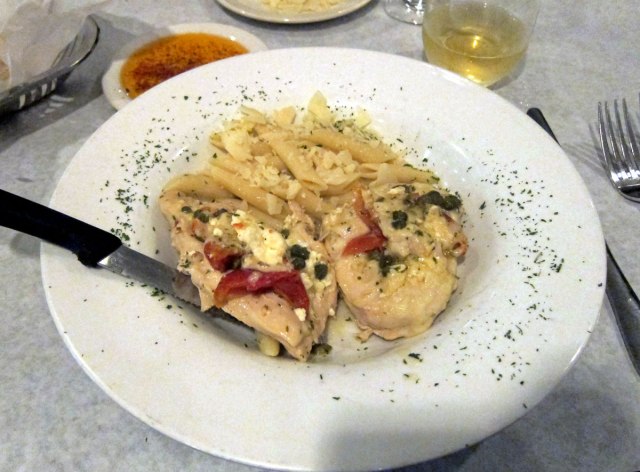 Following dinner I looked at the plane’s equipment 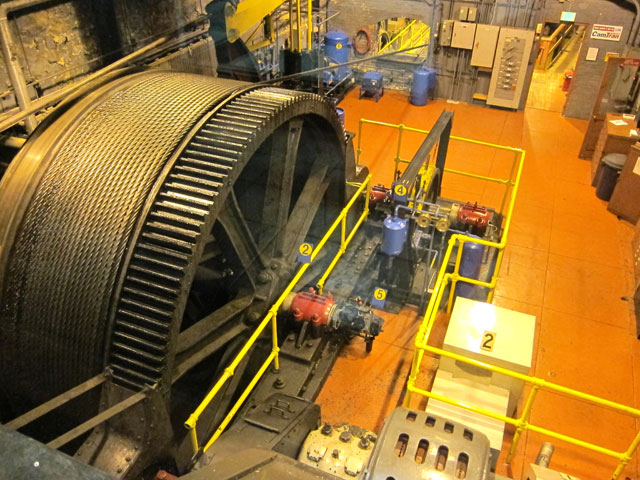 and then heading back down the 896.5 feet

and arriving back at the lower station there was not a bump, a jerk, nor any noise – just a smooth landing.

Awakening on Sunday, I had a packed plan before arriving in Pittsburgh by 4 for an exciting week long program you will eventually read about. I first drove back up to Westmont (the high end of the Inclined Plane) to visit Grandview Cemetery. As a company mill town, the Cambria Iron Company began developing the mountain top for housing, and the Incline Plan to move workers to and fro. A cemetery was planned, and sadly immediately became the final resting place for flood victims, including the unknown persons buried behind this monument. 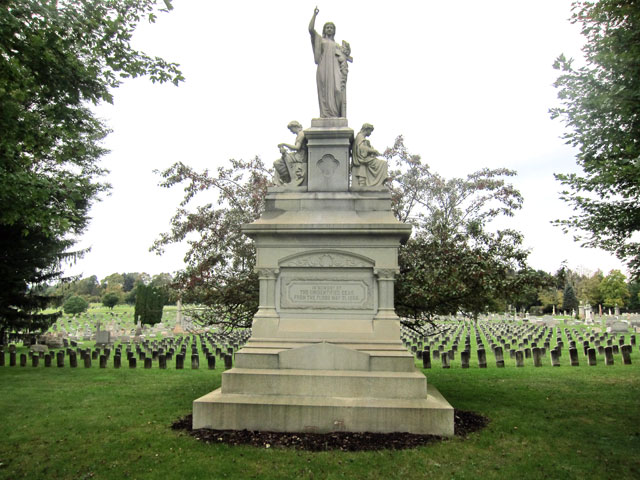 Next I headed to South Fork, the site of the failed dam, which is now the Johnstown Flood National Memorial. In 1879, a group of wealth Pittsburgh industrialists (including Andrew Carnegie, Henry Clay Frick, and Andrew Mellon) purchased the defunct reservoir and surrounding area and formed the South Fork Fishing and Hunting Club. It was the retreat from the dirty city for 66 members. A large clubhouse and 16 cottages were built for the club (nine remain). Below is original home of President, Elias J. Unger, and the visitor center that was reconstructed to replicate Unger’s barn. In the center of the image you can make out the remaining ends of the earthen dam.

These images show you what went wrong. You can see in the drawing that there were originally viaducts under the dam controlled by valves on a wood tower out in the lake. The dam had deteriorated once abandoned, and when the club came in they removed

the control tower, and the viaducts that could be opened for run off. In addition, to make room for carriages to cross the dam, they removed four feet from the top. Without a means for run-off, and with the water level now closer to the top of the dam, a disaster was waiting to happen. Here are some sketches (that you can click to enlarge) showing the before and after the club’s “renovations.” 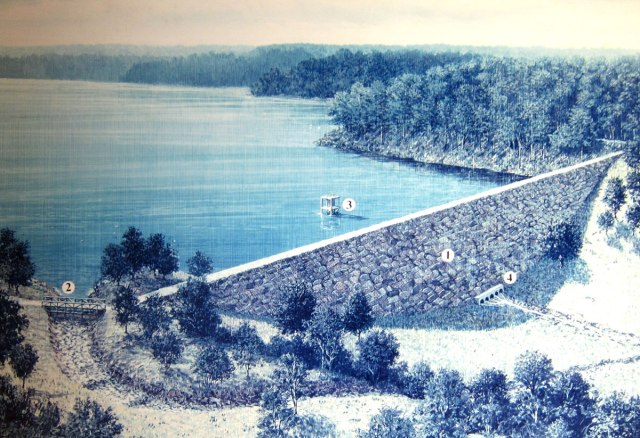 And a photograph after the dam gave way – it was an immediate burst.

3:10 PM the dam gave way
4:07 PM at Johnstown, the water divides into three paths of devastation; resulting in:

The death of 2,209 people
99 entire families died, including 396 children
124 women and 198 men were left widowed
More than 750 victims were never identified and rest in the Plot of the Unknown in Grandview Cemetery
Bodies were found as far away as Cincinnati, and as late as 1911
1,600 homes were destroyed
$17 million in property damage was done
Four square miles of downtown Johnstown were completely destroyed
The pile of debris at the stone bridge covered 30 acres
The distance between the dam that failed and Johnstown was 14 miles.

There are many on-line sources of images showing you the after effects in Johnstown.

I then circled around what was the circumference of the lake, and first came upon the “clubhouse” owned by the Park Service, empty and yet to be restored. The lake came to a point just on the other side of the road in front.

what is missing in this image below? 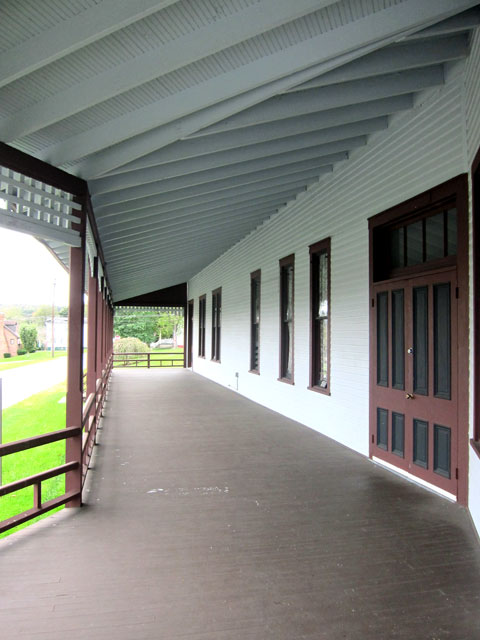 And, here in a gallery that you can click and enlarge, are six of the remaining nine summer homes of the club members. 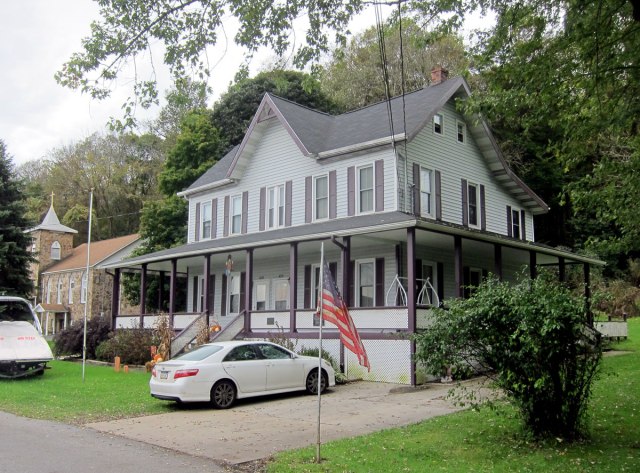 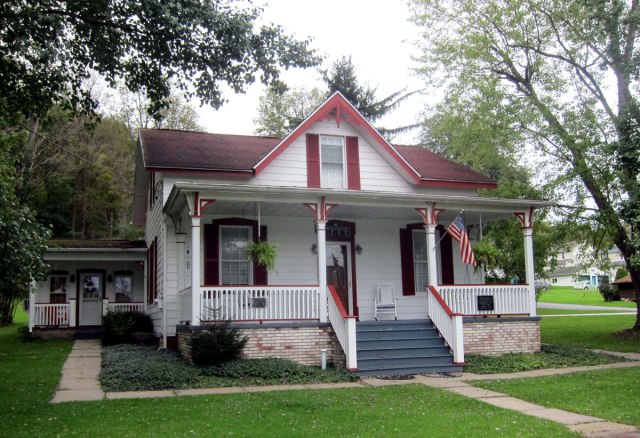 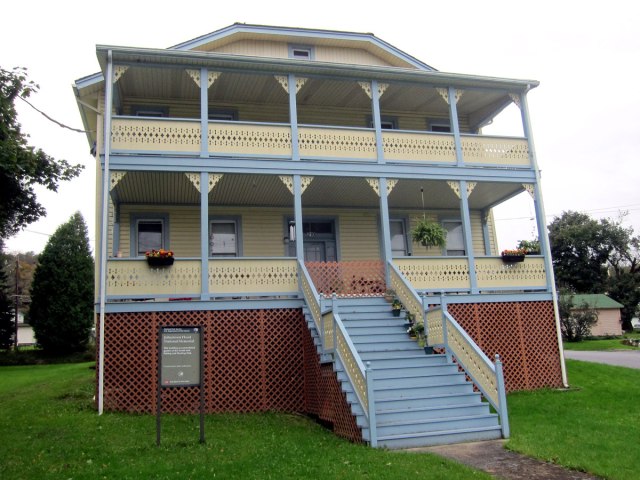 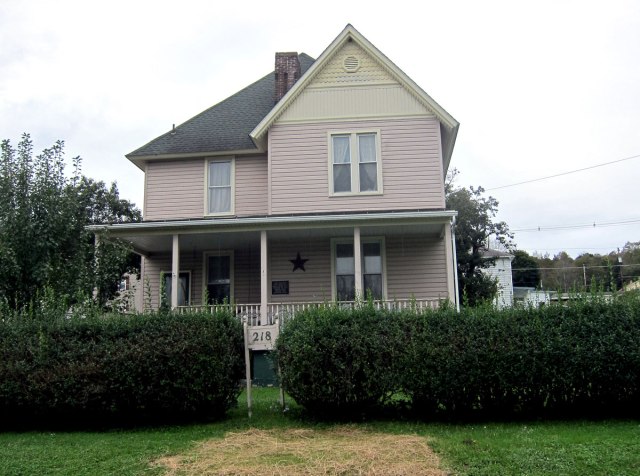 Just down the road is the South Overlook of the South Fork Dam Site.

and, across the way you can see the North Overlook and the Visitor Center.

and here is a short video panning the area of the former reservoir, now a small street, fields, and a rail line.

Finishing up in South Fork I decided that I could make a quick trip to the Allegheny Portage Railroad National Historic Site and still get to downtown Pittsburgh in time. You can pack more into a day when you carry peanut butter crackers for lunch – keeping priorities straight.

Following the success of the Erie Canal in 1825, Pennsylvania needed a route to the new west. A railroad was built from Philadelphia to the Susquehanna River, where canals took over transporting freight and passengers. Work was done on the Western Division of the canal linking Pittsburgh and Johnstown, but 36 miles and 3,000 foot Allegheny Mountains provided a barrier to connection. The solution was a series of inclined plane railroads. Canal barges were loaded onto train cars (in many cases barges were developed to be split into two or three sections to fit on the cars). On steep grades the loaded cars were pulled by tow wires powered by steam engines. On the straighter sections horse, and later steam locomotives were utilized. The 23 day trip from Philadelphia to Pittsburgh by wagon on the old turnpike now took but four days. This portage over the mountains operated until 1857 when a direct railroad route was completed. 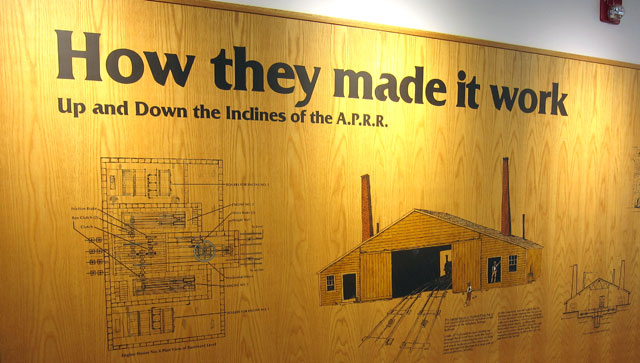 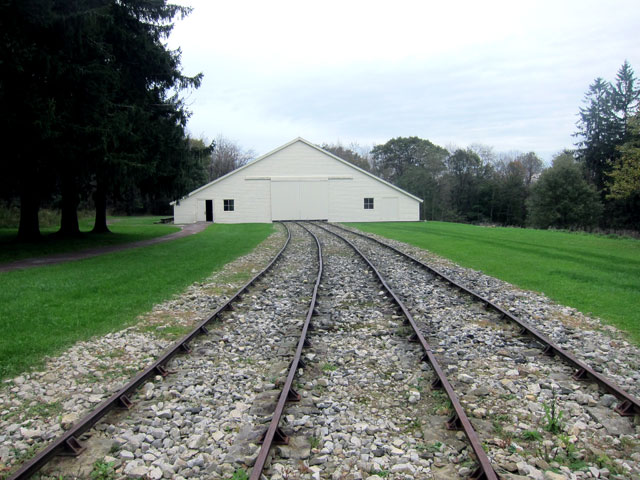 but a tad larger to protect what is left of the original stonework foundation.

and, off the tracks go 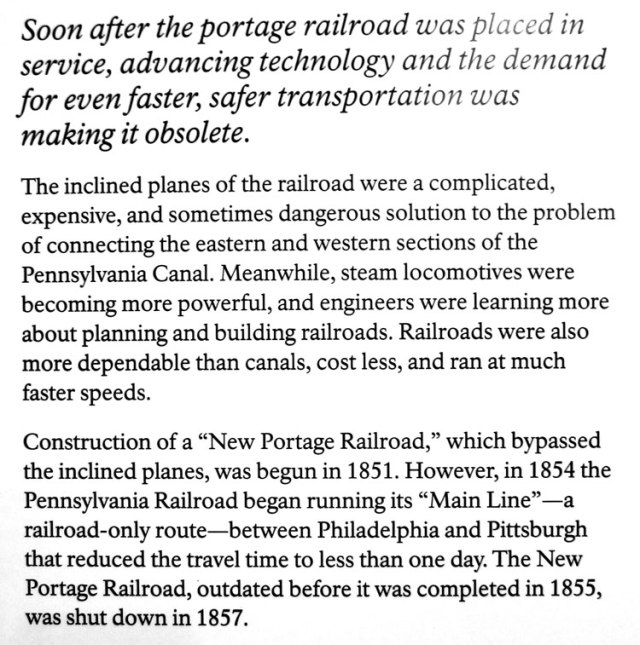 Well, hopefully you got this far, and enjoyed what I shared. I then headed to Pittsburgh for the Road Scholar program Signature City Pittsburgh for the 14th through the 19th. I had absolutely no idea how fabulous Pittsburgh is now, and all the history at this river junction. I will eventually share all that with you. But I will probably share my return home first (will be easier to write about). So, for a look at the Flight 93 National Memorial, Hershey, and the National Museum of Industrial History, come back soon. Yours, RAY