So these adventures are four months apart? I still want to remember, and to share, and hopefully provide you with some ideas for future fun. Let me begin with the past week, and go back. Only lived in New Hampshire for sixteen years, and never been on the Green Mountain Railroad. It was time, looking at the remaining fall schedule, and my schedule, it had to be now. A GREAT TRIP followed for an almost three hours from Chester, Vermont to Summit and back. I told you about Summit and the original rail line back in July. I booked the 10 AM train, and BLUE BELLE and I arrived at the Chester Depot at 9:20 for the 9:30 boarding. 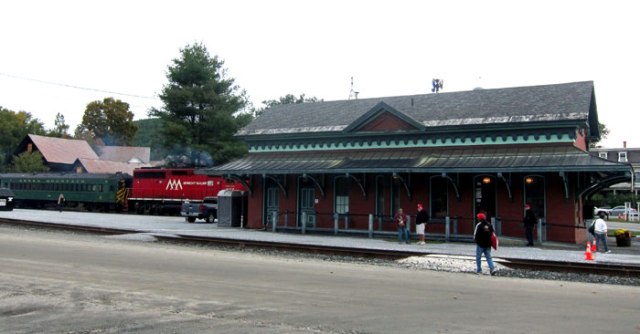 Looking back across Route 103 is Lisai’s Market established in Bellows Falls in 1926 (I enjoy shopping in the Bellows Falls store). But why show you this view? In 1963 I shopped here (different ownership them). I was “shunpiking” in my 1929 Model A Ford roadster from Connecticut, and needed some cans to heat for dinner while camping. 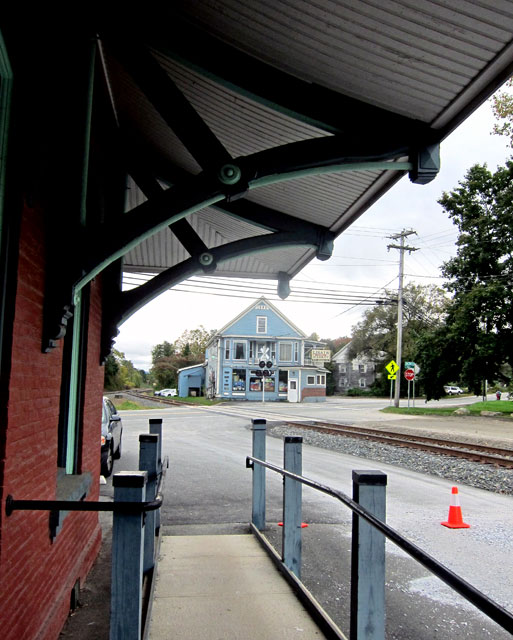 This “iron horse” was ready with a large number of carriages. Since the return trip was reversing direction, there was a locomotive at each end to lead the way and pull. 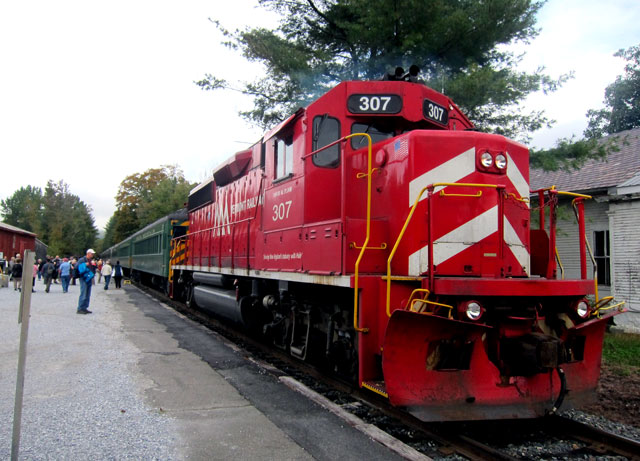 It was time to board. For some reason I thought I would have the train to myself – ha. Forgot it was leaf peeping, hoards of folks, and tour buses pulling up for boarding also. 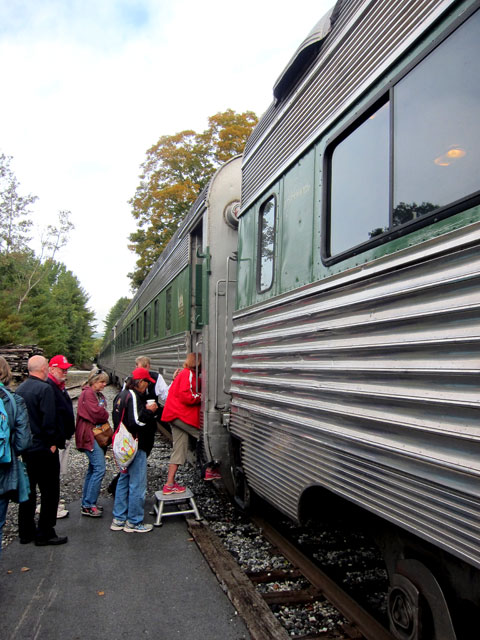 We “general passengers” were shown to these beautiful Budd cars, while the bus groups were in some older style coaches. Quickly seeing my options, I staked out this comfortable spot in the bar/food service car. I had two chairs and a table to myself – special for a sold out train. 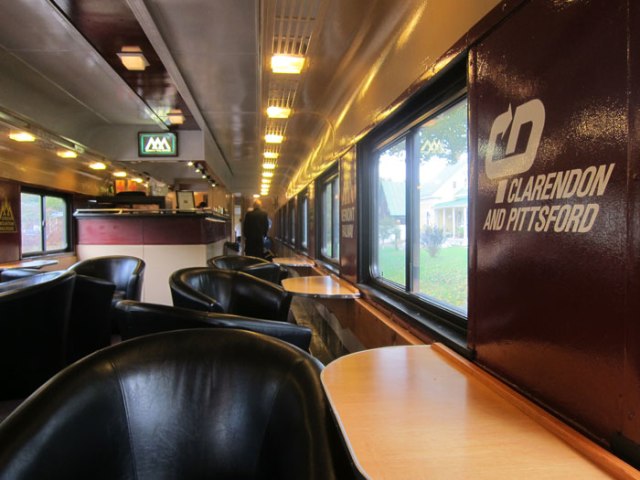 Here are the interiors of the other cars in the consist. 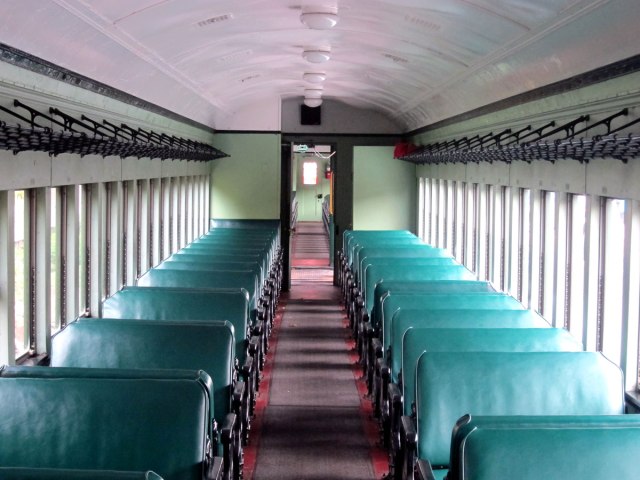 And the whistle blew, and off we excitedly went. The trip for the most part was following the “backside” of Vermont Route 103. So much fun to get a different perspective. There was one section of backwoods along dirt roads to Cavendish I was not familiar with. Looking at my road map and seeing the train tracks I have some new shunpiking to do to “fill in the map.”

We passed this old Talc plant (closed in the 1970s) in Gassetts, now abandoned, but later on passed a new one. The Vermont Rail System carries freight through out the state, and connects with other lines. There are over 230 miles of tracks it leases from the State, and about 150 employees operate the freight trains. The Green Mountain Railroad is the tourist passenger subsidiary, and has 9 employees. The railroad is a third generation privately run system. Nicole, the grand-daughter of the founder, sat with me and the couple across from me for awhile. She told us so much, and I asked so much. The family, and company history she wrote – click this link to read.

Coming into Ludlow, the station is actually up a hillside away from Route 103 and the business area. Nicole hopes that someday the State will restore the station, and it can be used for Okemo ski trains. Vail Resorts has recently purchased Okemo in a $82 million deal.

Ludlow Station can use some restoration

Several buses of leaf peepers got off here to continue bus tours.

On the right of way of the old Rutland Railroad, the tracks were originally laid in 1848-49. Milk trains daily made trips to New York and Boston, even stopping at Cold River Station in Walpole. Until about 1953 the Green Mountain Sleeper would travel this route from Boston to Montreal. Following World War II, train travel and shipping waned in favor of cars and trucks. Eventually strikes closed the Vermont railroads and lines, and the track and right of ways became property of the State.

At a spot in Summit – Mount Holly – we stopped, the engineer walked through the train to the engine headed back towards Chester. I offered to help him, but he said, “no problem, downhill all the way, I just have to release the brakes.” At Summit we were at about 1511 feet elevation, so the coast back to Chester at about 500 feet was easy. 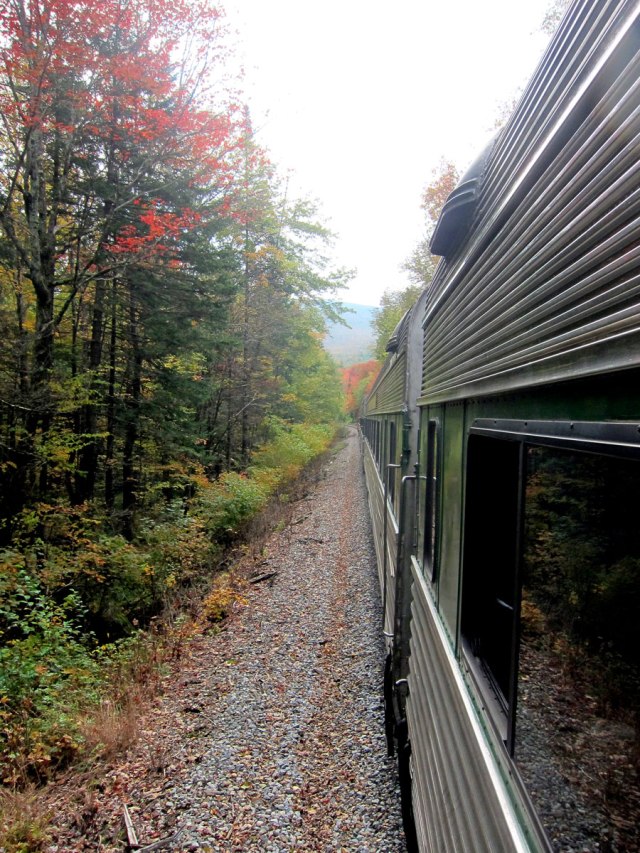 Looking east back towards Chester

If you ever travel Route 100 from Weston to Ludlow you travel under a fantastic trestle just before the junction with 103. What a treat to now be on the trestle.

and, from the center of the trestle looking north to “downtown” Ludlow.

Do you remember my first “shunpiking” post from Crows Bakery and Cafe in Proctorsville in April 2011? Here is Crows from the train while crossing the road heading towards Cavendish.

and, sadly all good things do come to an end, but memories linger, and new adventures come along.

I am so glad I went – foliage was not peak (it was when I was back in the area with Gary and Alex on the weekend) but I loved seeing the “backside” of a familiar route as I said earlier. AND, Nicole told me that this is the last year the Foliage Tour will head in this direction. From now on, the train will go from Chester to Bellows Falls as it had previously (before floods destroyed track – now repaired) and pass two covered bridges and travel through a gorge. I should have booked my 2019 trip.

So, now let me re-ride the rails that I rode in North Conway June 14th. I did a two night sojourn 13-15 June with the the focus being the Conway Scenic Railway leaving North Conway and going to Crawford’s Notch. Back roads, of course, on the way across state. I stopped first at this Calef’s Country Store in Barrington for lunch – worth a trip and a stop.

When did you last see a phone booth, or a pay phone on a poll? Long time ago, right? Well, I captured this view for you, albeit without the phone itself. You can still stand there and use your cell and pretend. Now a second reason to make a trip to Calef’s.

Passing through Union – how perfect a stop on the way to a train adventure.

lots of photo ops there – here are just two 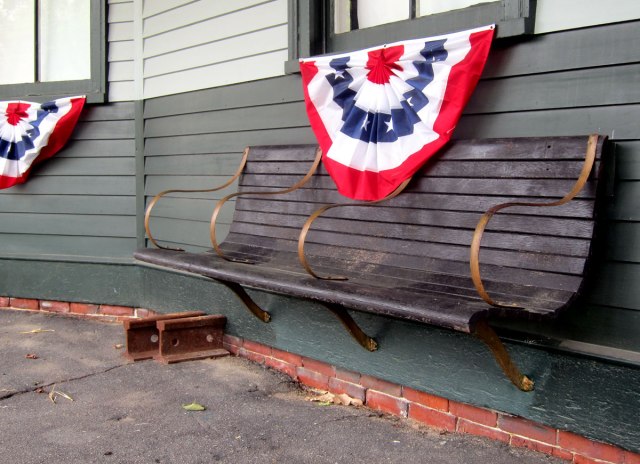 I arrived in North Conway at my home for the next two nights – the Cranmore Inn, operating since 1863, in the shadow of Mt. Cranmore Ski Resort.

Yes, just perfect with rocking chairs on the porch 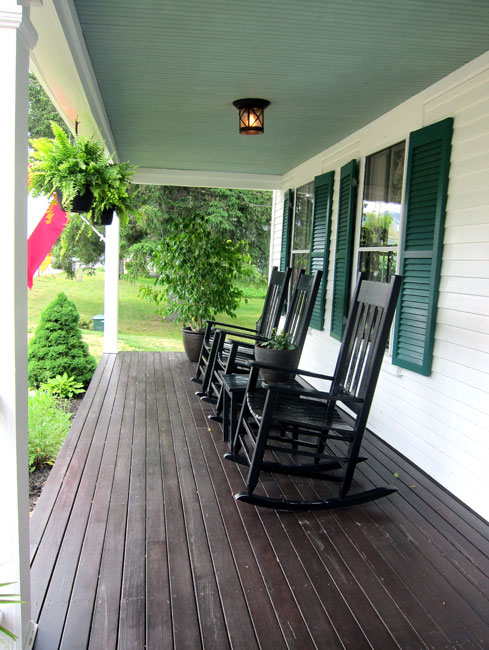 and I was “upgraded” to a lovely spacious room, but as you know I love to spend my time in the common areas – not bad here. 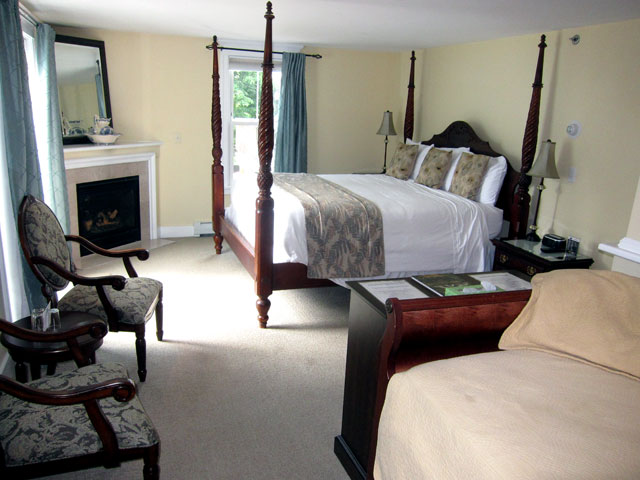 I then walked back to “town” and the common and train station to “scope out” the next day’s adventure getting the “lay of the land and tracks.” 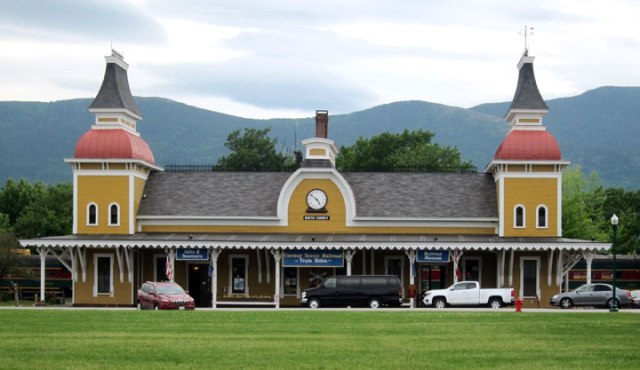 going back to town, you know I love 19th century country or general stores. Here are some classic interior views. 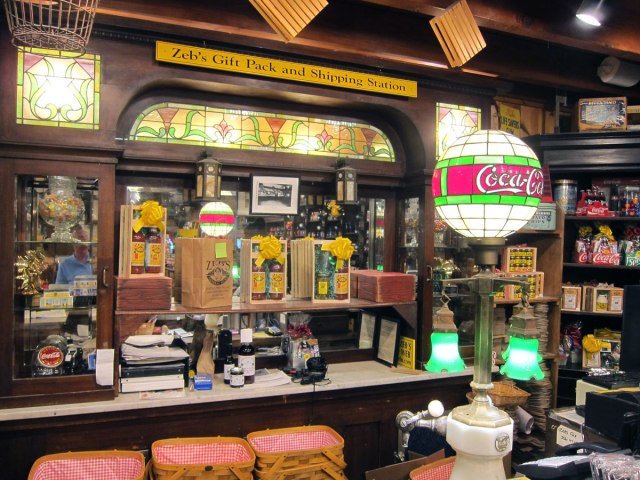 For this first evening there I decided to cross the border to Fryeburg, Maine for dinner at the Oxford House Inn.

a great evening meal on the porch

The next morning, I was ready for a day and lunch on the rails, and walked over to the station. 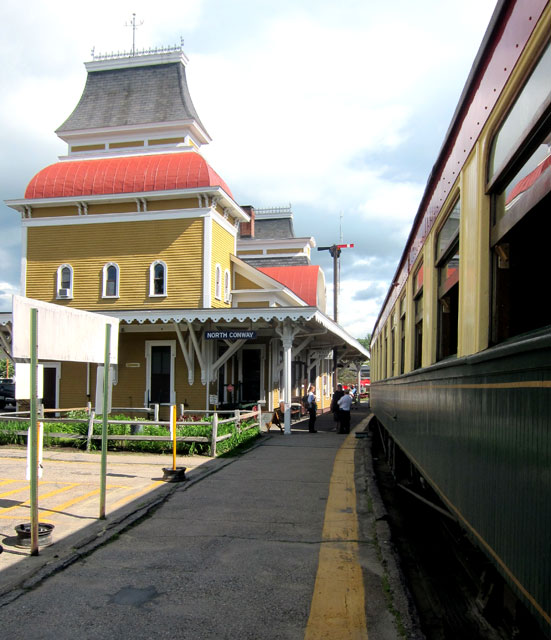 I booked a seat in the observation dome – if you are going to do it – do it right, for something different, and a higher view.

I shared similar images when I traveled across Canada by Via Rail Canada, but here is how you get up to the observation dome

and, in the dome itself

and we were off following the river and up into the Notch. Here is the classic scene on the Saco River

almost the same view as the painting I saw in June at the New Hampshire Historical Society –  “A View on the Saco” by Godfrey N. Frankenstein done in 1847.

Some views around the train 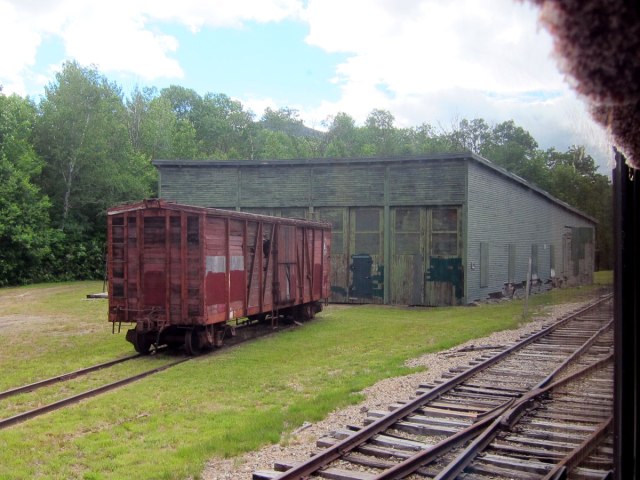 Old roundhouse along the way

It was an overcast day, and upon arrival in Crawford Notch, a light rain greeted us. 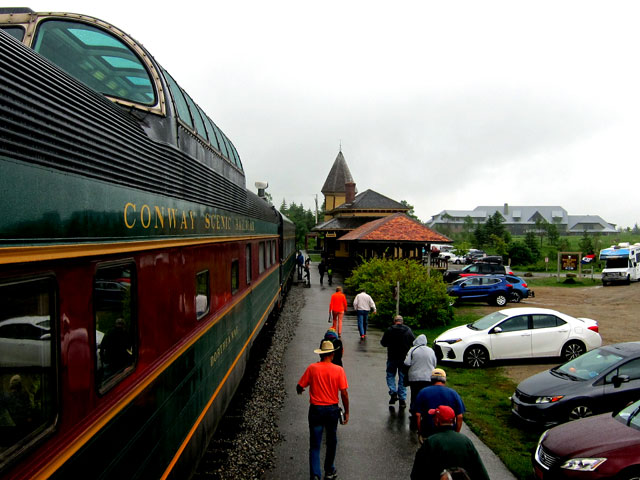 and looking back towards from where we came

and, arriving back in North Conway looking east toward the Mt. Cranmore Ski Resort

and, a look inside the train station “pulse” not much changed from day one. 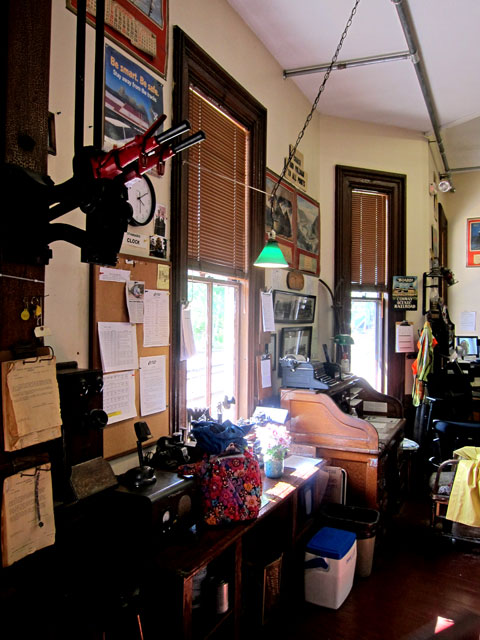 I am glad I took the trip, got to again see the “backside” to the road up to the notch, but I must confess the scenery is hidden by the trees surrounding the tracks, and “nothing to write home about.” It was the beginning of the season, and the dining car staff and food also was nothing exciting, and somehow eating on formica table tops is not my forte, particularly since I have had fine china and linen on Via Rail Canada – you get to expect a certain norm.

Dinner for my second night in North Conway was an easy decision. Cathy and I had stayed a couple times at the Eagle Mountain House in Jackson – I had to visit again. Heading north, and past Story Land, a right turn comes through this classic Covered Bridge (it was hit and damaged a month after my trip through).

The road up the hill follows a scenic stream with many water falls.

and, you arrive at The Eagle Mountain House – a classic old Victorian mountain hotel.

of course, another “rocking chair study” 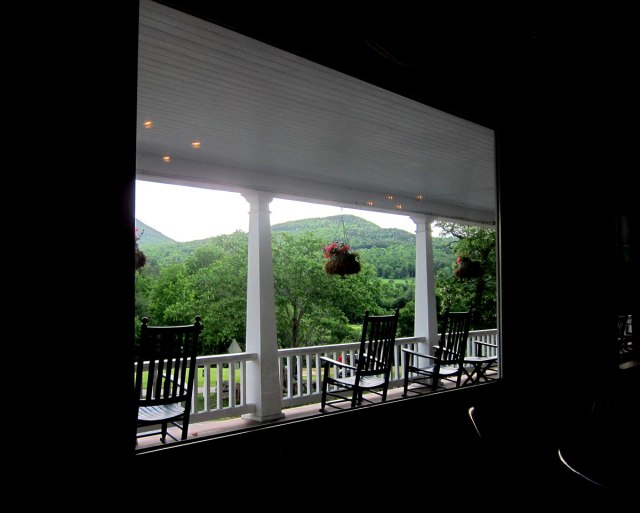 View from my dinner table

A view driving back to North Conway

Heading back home, my plan was to cross the state on The Kancamagus Highway. Its 34 miles was completed in 1959, but not completely paved until 1964. Closed in winters until 1968 when it was plowed for the first time. I do not recall driving through with Cathy, but I did tour most if not all of this route in 1962 or 63 in my 1929 Model A Ford Roadster, making it all the way up from Wilton, Connecticut. You can click on the map below for a larger view.

Heading west from North Conway I first stopped at the visitor center, and the Ranger suggested stops. There is wonderful scenery along this route and interesting history about early life in the area that you should take in. Life was a struggle in the mountains, and still is as you can see the trees to the right working to “hang-on.”

I first explored the area around the Albany Covered Bridge.

During the Depression years of the 1930s, before the road went all the way through, the road was relocated by the Civilian Conservation Corps, and Lower Falls developed as a roadside attraction. There are trails, picnic areas and observation locations.

Rocky Gorge has been visited since Civil War days. Trains shortened to 4 hours what was a three day stage trip to bring tourists to Conway. Then by carriage and coach they would be brought to this scenic area. 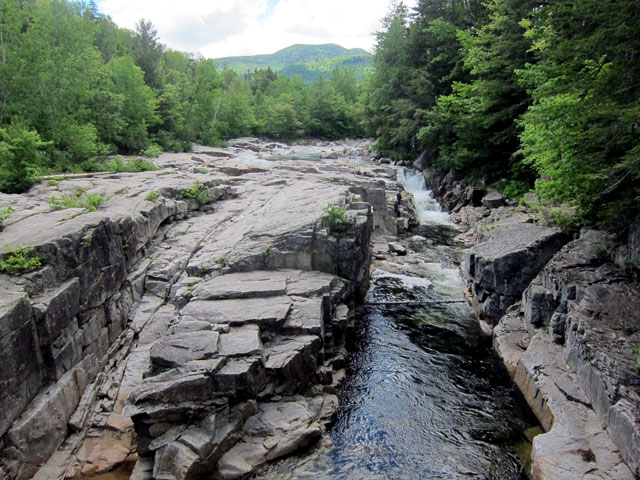 Continuing on a trail up from Rocky Gorge you come to bucolic Falls Pond. 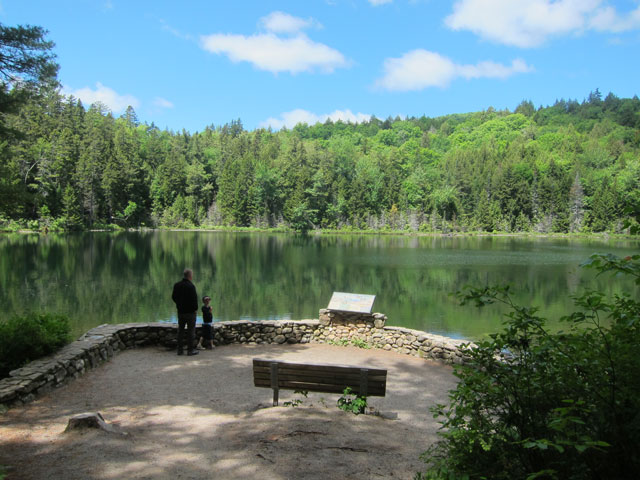 All that remains of the thriving farming village, Passaconaway is this historic home. Open for tours, I was there the wrong day. Also there are other events held in this area.

If I had gotten to this post in a timely fashion, I could have shared more tidbits of history and facts learned along this route, but at least I am now giving you a flavor. If in the area, do take the time to travel along and enjoy The Kancamagus Highway.

I then cut down the western part of the state – back roads – and home. If you like trains, hurry to The Green Mountain Railroad, and you do not have to hurry to the Conway Scenic Railroad, except to tour the station and see the locomotives and cars in the rail yard there.