My program and introduction to amazing Pittsburgh, Pennsylvania (posts eventually coming) finished up before noon on Friday the 19th. Plan was to stop at the Flight 93 National Memorial in Shanksville on my way to Hershey for two nights with a full day in between.

I back-roaded (of course) to Shanksville and the Flight 93 National Memorial. I took US 22 east out of Pittsburgh, then cut 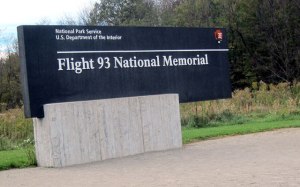 down to US 30. I definitely have to get back to explore Western Pennsylvania, The Allegheny Mountains, Ligonier, Laurel Mountain, etc. Arriving at the Memorial I was overwhelmed with the number of cars (exceeding space in the parking lot) from all over the US – and this a mid-Friday, with school in session. A solemn place, I will let my images speak for themselves with limited words of explanation. A volunteer Ranger is on hand to give an introduction to the site and that day.

then you head down the path to the visitor center. The blackish path in the center is the track of the doomed plane.

people were crowded around all the displays reading away 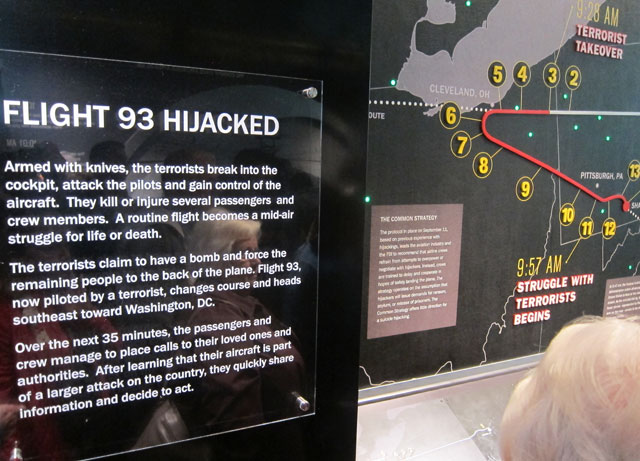 the next three images I took from the displays. First here is a photo right after the crash that created a 45 foot deep crater with barely anything remaining. A stand of trees for forty feet was blown down. 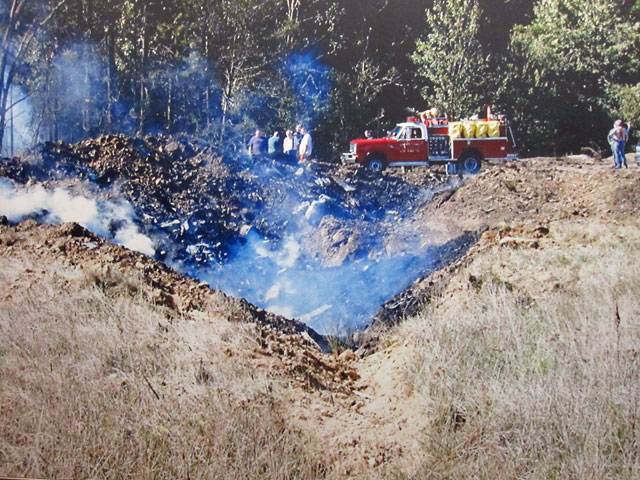 this is an aerial photo taken of the site by helicopter

and, there is a bronze plaque you can touch to feel the destructive contours Note the swath of trees blown over. 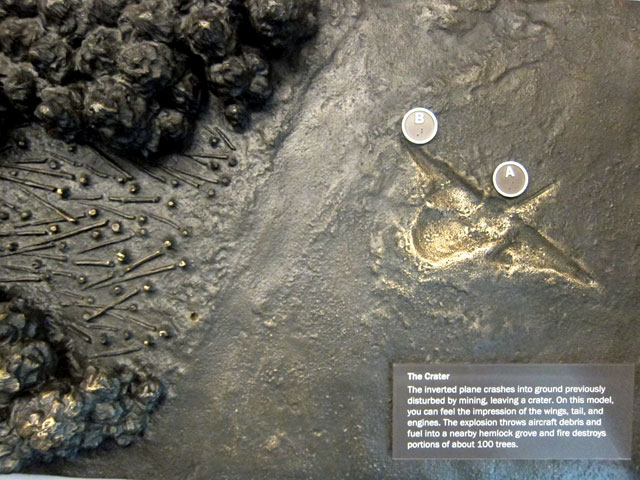 at the end of the hall you can look out at the crash site, now signified by a 17 ton boulder. Probably the only National Memorial with tissue boxes strategically placed. I almost pulled one out. 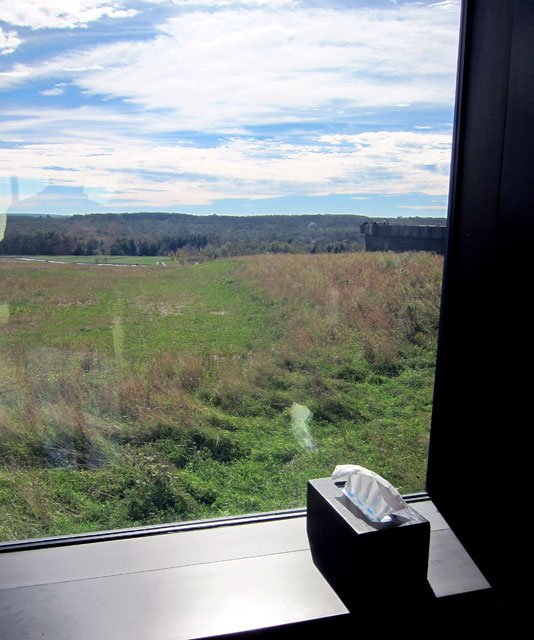 the end of the ramp overlooking the site. This area was originally an open-strip mine, abandoned and covered over at the time. Two people working in the area saw the plane in its last few seconds – apparently upside down – and traveling at over 500 MPH.  A few more seconds of flight, and the plane would have landed in the local School.

the boulder marking the approximate site of impact

and, looking back to the Visitor center.

I headed to Hershey to settle into my B&B. I have fond memories of Hershey from the 1960s to the 1990s at the AACA (Antique Automobile Club of America) Fall Meet and Flea Market – miles and miles of automotive related flea market. My Dad set up there selling cars and parts, and I would visit when I could. A few times David and Gary were also able to join me. I have a couple non automotive antiques in the house that I found over the years there, and I use, and cherish for the memories. But when you are focusing on a car show, there is no time left to “do Hershey.”

Hershey has changed since I was last there 25 years ago. I cannot image walking fields of blacktop — it was so much more fun, and a challenge, trodding through mud. It is crowded now, the Amusement Park has expanded into one of the former show fields, The Hershey Story is about 9 years old, and the AACA museum about 15 years old. I had to see it all. On Saturday the 20th I arrived at the AACA museum shortly after it opened.

Charles Duryea and his brother Frank are credited with building the first gasoline powered auto in the US demonstrating it September 21, 1893, in Springfield, Massachusetts, But in the museum is the 1896 Chicago Benton Harbor, now considered to be the first vehicle in America built from scratch as an automobile as opposed to construction on a modified horse-drawn carriage.

In a reconstructed blacksmith shop (the early automobile repair shop) is this original BRUSH – the only car made with a wooden front axle. I think my Dad had one once. I love original condition. 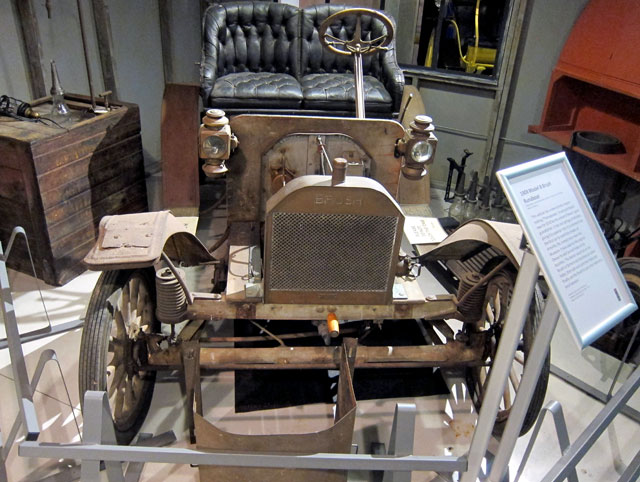 another original around the corner was this 1909 Buick Touring car. In the late 50s my Dad bought a 1908 Buick, with a “mother-in-law” seat in the rear from the Buick dealership in Brewster, NY. It was one of 14 known at the time.

This 1924 Model T Ford has won numerous awards, but of note and interest is this early camping trailer, a 1928 Zagelmeyer. Frank Zagelmeyer also invented the ball and socket trailer hitch so commonly used today. 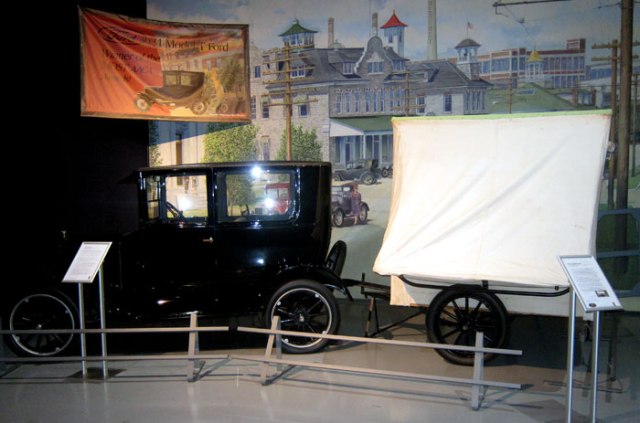 and, a replica of an early filling station 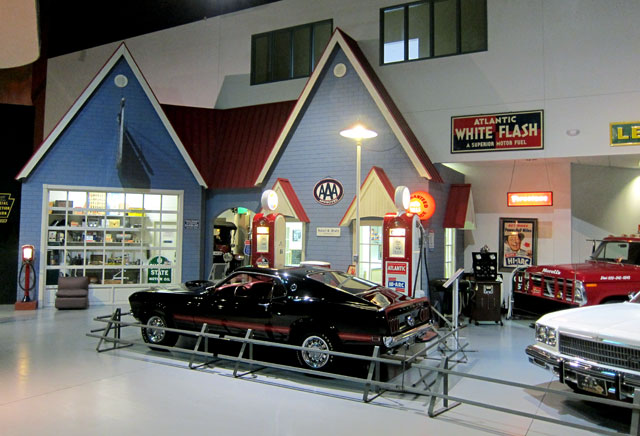 and, a drive-in theater and refreshment stand. The exhibits at the museum rotate, and the temporary exhibit of Mustangs were departing. At the drive-in were these two classic Mustangs. In my “Mustang” days (late 1980s, early 1990s) I owned a 1965 Hardtop (Maroon) and a 1966 Convertible (Royal Blue). I know all the trouble spots in these models.

I love old-fashioned paper maps, and the frustration opening and closing them. Here is the exhibit on maps that I wanted to share, and you can click on the gallery for larger readable images. 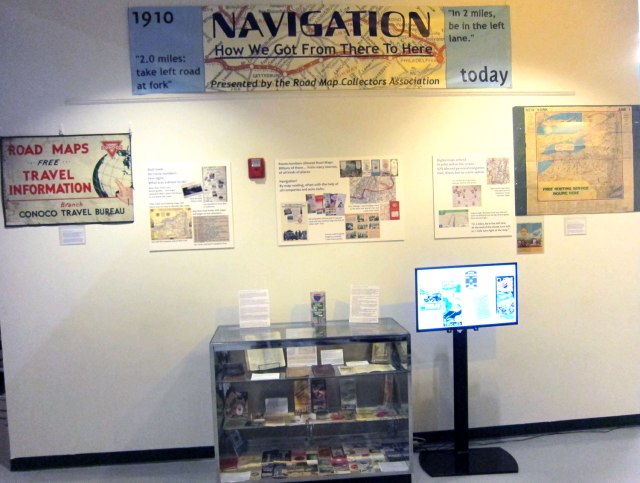 On permanent exhibit is the largest collection of Tucker automobiles and literature. You should take time to read more about this revolutionary vehicle from the late 1940s. 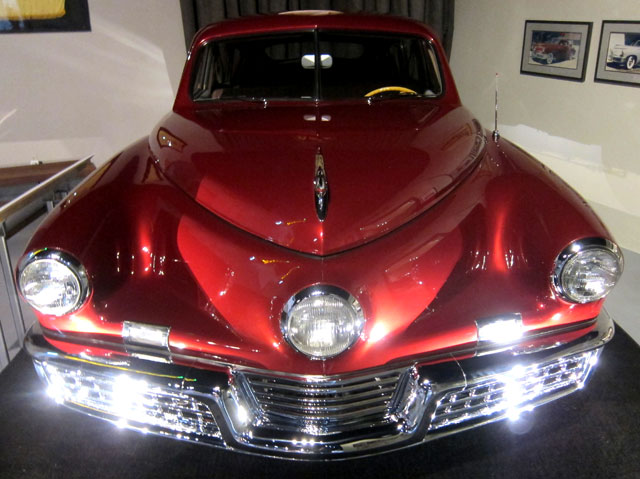 When I was on the TV show “Giant Step” with Bert Parks (in 1957 opposite the Walt Disney’s Disneyland, so you probably missed me), I told him I wanted to own a diner when I grew up. I have been fascinated and collected diner items since (what else?). But I had never seen this small style diner – Flo Fortnoy’s restored 1941 Valentine Diner. Next to the door is a money slot where the owner would drop his/her payments for the diner to be collected by the Valentine Diner Company.

so much to see here, and with the rotating exhibits certainly worth additional visits. Outside was one of the Hershey “Kissmobiles.” I did not get one – a “kiss” that is – just waiting. 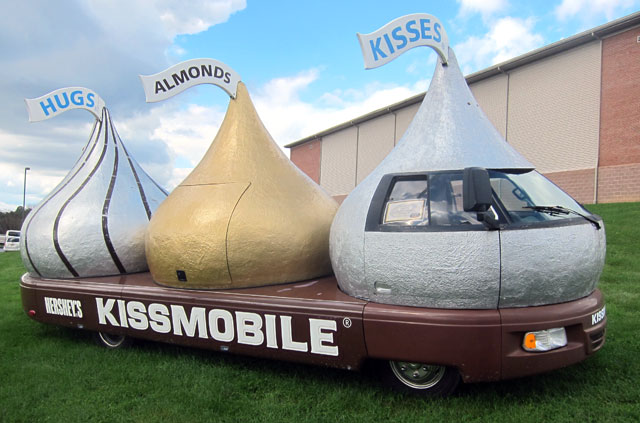 Almost three hours at the AACA museum, so off it was (skipping lunch to save time, of course) to see The Hershey Story – another new museum since I was last in Hershey. I read one book on Milton Hershey before this trip, and hope to attend a History of Chocolate adventure at Historic Deerfield in February – ending on Valentine’s Day, of course. I highly recommend a visit – I spent close to two hours – would have been more if I had not read a book beforehand. 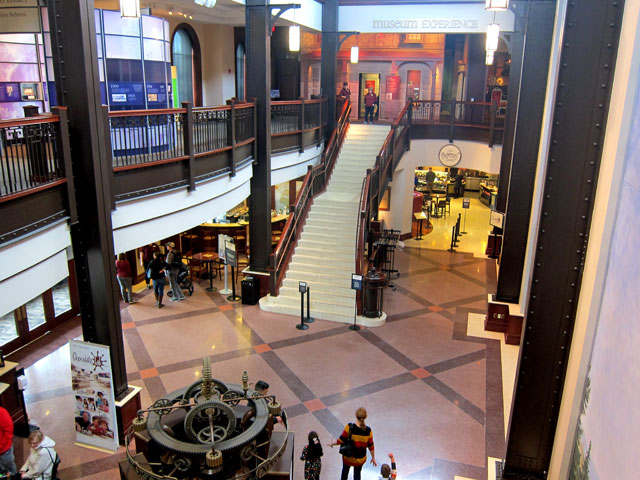 Here are some views of the exhibits. 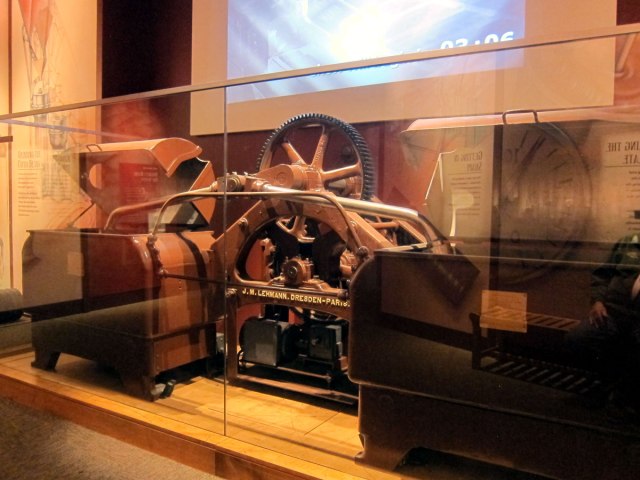 Milk Chocolate is mixed and mixed for its smoothness

Next I headed over to the relocated and expanded CHOCOLATE WORLD to buy my ticket for a “Trolley Tour” of Hershey. Again, glad I did because I like to learn the “lay of the land” and how the roads are all connected. Here is a view looking from a Hershey School campus looking at downtown, the stadium and expanded amusement park (you have to learn how Milton Hershey built his atypical “company town”), and the now paved fields that I loved to explore cars and car parts on.

On the tour I saw Milton Hershey’s home

one of his golf courses, and much more.

My plan for dinner was to head to The Hotel Hershey – I had made my reservation a week beforehand. My Dad had a car friend who always stayed there during the car events. I wanted to stay, but with tax was facing about $500 a night – my Dad’s friend had sold a world renowned travel agency in the late 40s – he could afford it. BUT, I wanted to experience it – and HIGHLY RECOMMEND you do also, at least for dinner as I did.

Check in lobby – The Hotel Hershey – on the lower level

The Main Court – The Hotel Hershey – on the second lever.

With many dining venues, I choose the finest restaurant – The Circular. And, hands down, the best experience I have had. “Good evening, Mr. Boas,” my server Mike greeted me. And, it just got better. But, “please just call me Ray.” He corrected himself later and complied. 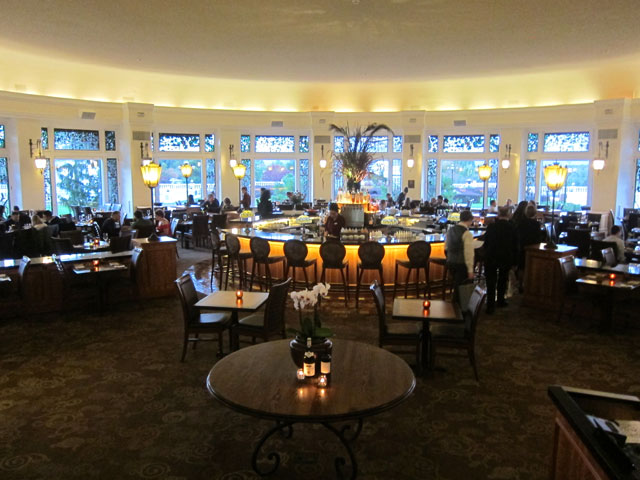 I was first given an iPad to view the drink and wine selections. Was there a choice? Yes – I selected – Hershey’s® KissesTM Signature Chocolate Martini with Smirnoff vanilla vodka, 360 chocolate vodka, and white crème de cacao. The gallery below shows you my table and its accoutrements. 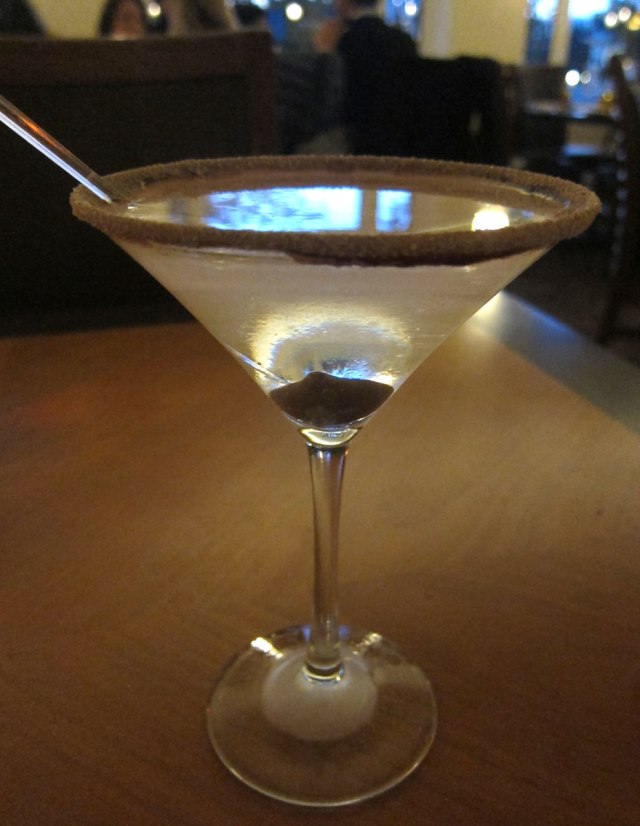 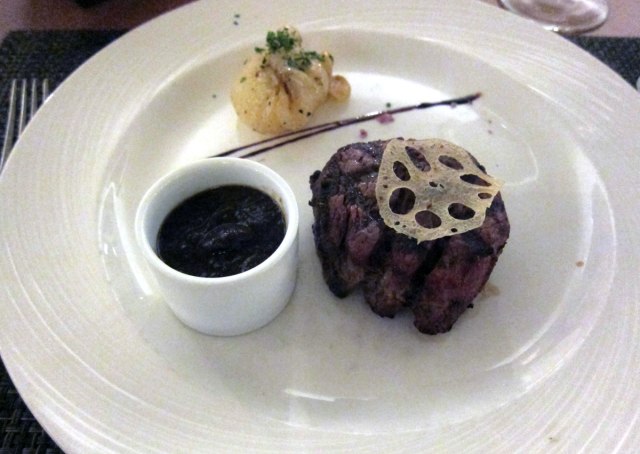 and, side of famous Chester County mushrooms

Not knowing how to top this day, I headed back to my B&B to prepare for my adventure on Sunday in Bethlehem, Pennsylvania, and the trip home. I will get to Sunday at National Museum of Industrial History hopefully within a few days, and then get to telling you about all my fun and learning in Pittsburgh.

Thank you so much for spending your time experiencing my adventures with me – love, RAY