The RLI feels as much like home for me as home does. I had two nights in a row before A CHRISTMAS CAROL begins negating three day adventures.  I struggled, and struggled with where to go, and what to do.  Maine was a contender, but this time of year most small museums and attractions are closed.  Then it struck me – just go to The Red Lion Inn.  So, off I headed Tuesday shortly after voting with basically no plans. But you know that if I simply follow the front of the car, adventures unfold.  And, as my time evolved these two days I still cannot believe that after almost 20 years of serious exploring in the Berkshires (and over 50 since I first camped here) I am still uncovering new sights, things to do, and fantastic back roads and scenery.

I left with only one thought in mind.  There are two routes crossing Massachusetts west of the Connecticut River that I am not familiar with.  So, head west on Route 23, and back east on Route 57 when heading home. Tuesday I exited I-91 to pick up US 202 to head to Westfield (not been there). Then west on US 20 out of Westfield until MA 23 begins.  Only been on the western most part of 23, so now was the time. And, it is now imperative to “shun the Mass. Pike” since they recently (well 1-2 years ago) began charging a toll from I-91 to the NY border.

You never know who you will see on a back road.

architecture.  US Route 20 always a joy (love it in NY state – have traveled most of it in the past two years, hopefully you read about). In the literature that I just picked up (you know that I collect all travel literature, file it in categories, and actually read it) I learned that US Route 20 is America’s Longest Highway at 3,365 miles from Boston to Newport, Oregon, and there is a Historic US Route 20 Association.  Another – very long – trip that now must be accomplished.

Beginning at the eastern terminus of Route 23 I found it scenic, hilly, and enjoyable as it basically paralleled the Mass Pike (easy to see often with leaves off).  Not much along the way, Otis being the main town. I was getting a tad hungry, and often will find nice deli eats in small old general stores. As I entered Monterey, there was the Monterey General Store.

A quick turn to park, and to my pleasant surprise it was a delight inside — and a salmon,

capers, cream cheese sandwich worth driving back for.

Arriving in Great Barrington I turned north on my favorite US Route 7 and got my room key a tad after 3PM.  Then my routine of hanging clothes, assembling reading material and planting myself in my spots on the porch and then in the lobby in front of the fireplace.  Change to coat and tie for 7PM dinner, followed by reclaiming my spot in front of the fire. And with heavy eyelids, eventually retreat upstairs enjoying ancient antique filled hallways along the way.

Premium Outlets Mall at Exit 2 of the Mass Pike. On the way to the shopping however I sidetracked to Tyringham. About 18 years ago Cathy and I stumbled into this architectural oddity – Santarrella.

Around the bend is Tyringham Cobble, a fascinating geological spot with hiking etc.  The properties owned by the Massachusetts Trustees of Reservations are worth learning about and exploring.

I then followed a road over the mountain (more fantastic views into the valley with leaves gone), and am thrilled that my GPS system in WAZE has learned my type of road. 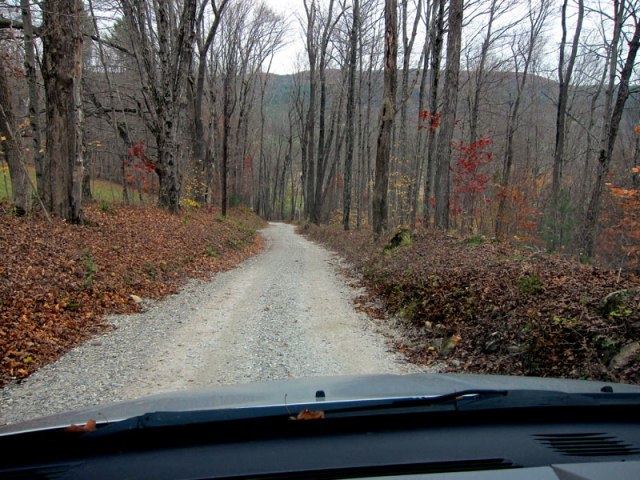 My Kind of Road – no matter what wheels I am in.

My shopping was focused (only necessities) and I got two pairs of jeans, and loaded up on underwear (do so about every 3 years).  Had just gotten a coupon book in mail with an additional 20% off starting the 5th, and if you buy two packages of same item it is 40% off outlet price.  So, 6 changes of each, plus some flannel PJs, and what I “saved” was more than what I spent.

After the rare Ray shopping experience. I followed US20 through Lee and cut over to Lenox.  Never having explored the residential streets in Lenox, I did so – and, HIGHLY RECOMMEND you do also – Amazing.  Continuing out past homes I worked my way back to Tanglewood, and then headed up into the hills for the back roads to Hancock Shaker Village.  Even though open, there was no one there, so I decided to wait for a visit, and turned back to MA 41 to head back to West Stockbridge and then Stockbridge.  But in a short distance was a right turn back to Chatham and New Lebanon, NY.  I turned, and when arriving at NY 22 I turned north towards New Lebanon not recalling being on that stretch of NY 22, and not recalling New Lebanon. 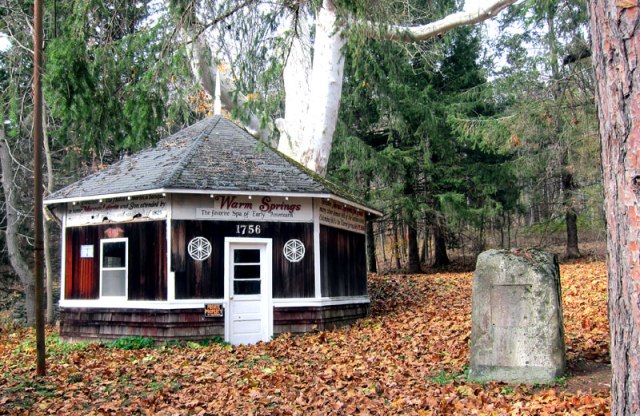 But when I arrived in New Lebanon I did remember the decaying strip where NY 22 and US 20 join. There had been nice antique shops there, but now most all is vacant – only 1970s strip stores remain.  But then I remembered that I had with me the best travel brochure I have ever had, and had just found for the first time on the rack at the Inn (I always scan travel racks and acquire brochures I have not seen before).

Published by the Lebanon Valley Heritage Center, the map (taking up most of one side, and very well done) and historical guide introduced the once-famous Lebanon Spring Spa Resort and the Mt. Lebanon Shaker Village – the first in the country.  HOW HAD I MISSED THESE BEFORE?  I shunpike, but the spa and village are just off the main route.  It was this fantastic brochure that introduced me.  Of course I explored, and have to return. 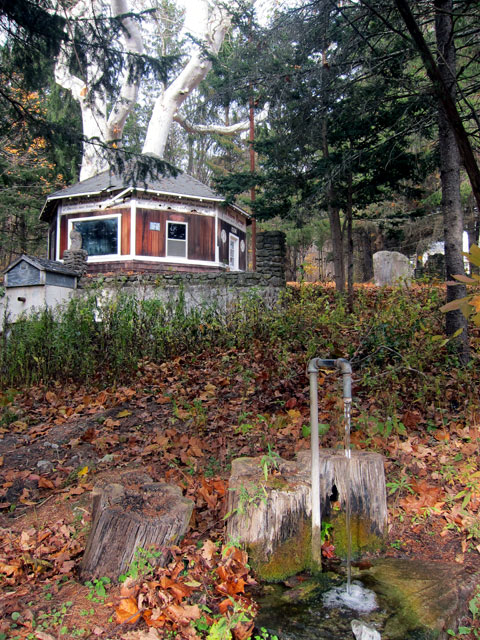 Spring Water flows at 500 gallons a minutes. You can fill your bottles from this pipe.

The Indians knew of the healing waters of the spring, but shortly after French and Indian War concluded in 1756 the spa was born, eventually becoming one of the most fashionable spas in the US. I love the old summer resorts and spas, and cannot believe I did not know about this one.

The Spring House, now enclosed, was built over a log-lined pool.  72 degree spring water flows at 500 gallons per minute and when I arrived a lady was filling her water jugs – I later filled my empty water bottles.  The giant sycamore is said to have been planted about 1760.

Columbia Hall was built in 1794, but demolished in 1914.  One of the first and most opulent of the spring’s hotels it had 300 bedrooms for 400 guests and ornate ballrooms. In 1825 the Marquis de Lafayette stayed at the hotel.  Other visitors included: Henry Longfellow, Daniel Webster, Charles, Dickens, and John Quincy Adams.

This building was begun about 1756.  Originally serving as a hotel, it is now an apartment building.  (remember you can click on my images to enlarge them)

I then explored the Cemetery of the Evergreens and this monument to Samuel J. Tilden. A native son, Tilden was a noted crime-busting DA in NYC, then Governor, and lost the Presidency in 1876 by one vote in the electoral college even though he received an overwhelming margin of the popular vote.

The Samuel J. Tilden Monument of the National Register of Historic Places.

But my biggest surprise on the other side of US 20 and NY 22 that I have missed all these years is the Mount Lebanon Shaker community – the first in this country.  Unlike the “restored” Canterbury Shaker Village that I visited in September, and the Hancock Shaker Village that I almost visited on Wednesday, this first in the country is essentially original and unrestored, but in three sections.  Part is a museum, part is now the Darrow School, and another section now is  the Abode of the Message, a Sufi Community.  Lots to explore on a future trip to report to you. 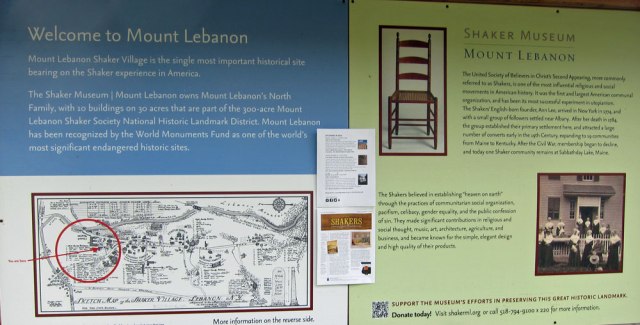 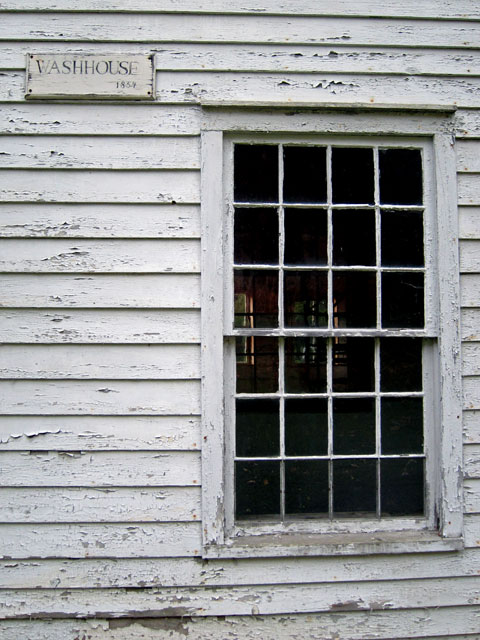 I then headed back to enjoy The Red Lion Inn, settled into my routine in the lobby, change for dinner, and retreat back to the fireplace before turning in.

On my check-out day I stayed laid back – yes, in the lobby in front of the fire.  Late breakfast, then buy a RLI coffee mug in the gift shop, and in tears check out around 11AM.

A rainy day – no problem, I am alive and happy.  The plan, back down US 7 and take Route 23 east out of Great Barrington to pick up Route 57.  At New Marlborough I did jog south to Southfield to see the old Buggy Whip Factory.  For a number of years in the late 1990s when I lived in New Preston, CT, I had several thousand books in the antique mall there — making several thousands of dollars in the process.  Hard to believe it was almost 20 years ago.  Back to Route 57 I can report that there is nothing to get excited about until reaching Route 8 and New Boston.  Route 8 (both in Connecticut and Massachusetts) heads as I recall all the way south in Connecticut, and I have travelled much of it, but need to explore from New Boston to Colebrook, CT.

But I really enjoyed Route 57 from New Boston to I-91 (the eastern terminus).  The road, the views, and the hill towns of New Boston, Tolland, West Granville, and Granville must be experienced for their bucolic village settings and exceptional colonial architecture.

But arriving at I-91 I can say I have traversed all of Route 57, and took off north home to begin preparations for A CHRISTMAS CAROL. Yes, it is time for ACC, which may impact my ramblings here, but who knows.

RAY RECOMMENDS – Explore the Berkshires — I am spent the last almost 20 years, and have yet scratched the surface.

Thank you for continuing to follow along, as always, yours, RAY