Do not despair, just because I am not traveling does not mean I am not busy.  It is A CHRISTMAS CAROL time, for the 6th year in a row.  My production with The Walpole Players has raised just under $17,000 cash for local food local food shelves in the first 5 years, and here is hoping for this year.

But these few words are to tell you: a) that I am alive: and, 2) what I am up to — moving into my new Apple IMAC with 27 inch screen in my new workspace in the kitchen. 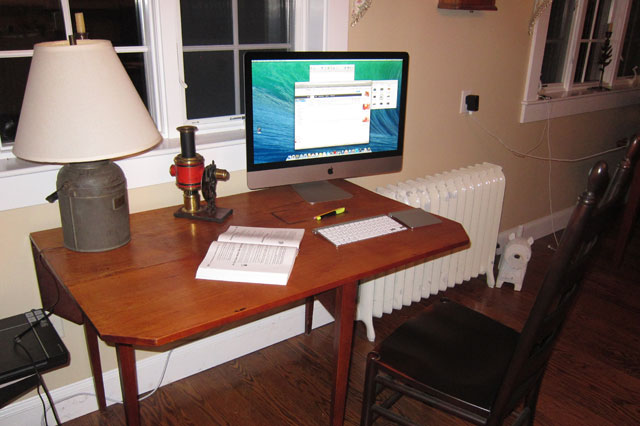 (did you notice the fantastic Magic Lantern on the table?  I found that on the way to David’s for my flight to Ireland – $65 – with original carrying case, 3 circular slides, 8 straight slides with 4 scenes, and two kaleidoscopes – worth at least $400)

Alright, I have two PC desktops in the office, but they run the old 1990s DOS program for my book business.  Then I started in the house with my Dell PC laptop, and earlier this year got my MacBookAir laptop — yes, David has been after me to transition to Apple.  On the “list” in January, 2014, was to buy a new Apple desktop specifically for a book project that I want to have done in April, 2014, but last week I said, “hey, Ray, you just sold 100 book lots at an auction with check due the end of November, get the new computer now!”

And, I did.  Due to arrive yesterday, Friday, it showed up on Wednesday.  And, I have been “moving in” since.  Driving back from David’s after getting back from Ireland I found the perfect early swing gate-leg drop leaf table to add to the kitchen (I know, second table in kitchen – other seats four – not to mention the center island that seats four).  Actually it was the table I found (a whole $89) that made me move faster than planned. And, I am thrilled.

Big challenge last night was to deactivate Photoshop Elements 11 on my PC laptop, and download to the new IMAC (only allowed to have software on two machines, and it is on the MacBookAir for traveling), but accomplished easily via Adobe “chat” in just under an hour.  And, now I am moving documents and pictures that matter into the new machine.

And, then it is learning Apple Pages to best effectively create the book I want to have ready for the 2014 Walpole Old Home Days.  And yes, this post has been created totally on my new IMAC.

So, that is an update.  No travel plans, but who knows??  A quick overnight could occur, and I do love The Red Lion Inn !!!

More soon I hope, as always, yours, RAY

This entry was posted in Miscellaneous Musings and tagged A Christmas Carol, Walpole Players. Bookmark the permalink.