Happily working on this post at the Dublin Airport having arrived here in plenty of time for my flight.  No problem being early, but late “does not fly!”

Yesterday my only plan was to go to Strokestown to see the Manor House and National Famine Museum (which was high on my list as is trying to understand the Great Famine and Irish history), but by the time I was done breakfast I added stopping at the Turlough Park House and Country Life Museum after first touring the grounds of the Westport House.

Open to the public since 1960, it was worth touring the Westport House grounds and how the harbor originally came up to the estate.  Now various amusements have been tastefully added around the grounds obviously to provide the needed income for upkeep.  I am glad that Sadie at the Boulevard Guest House suggested that I drive in.  She knows the current owners, descendants of the original family as I mentioned before.  I encourage you to learn the history of the house and town. (remember to click on thumbnails to open slideshow in each group.

Statue of Grace O’Malley, the pirate and original owner of the land

Looking out to the harbor

and across the inlet

Towards the harbor again

It was a short trip to reach the Turlough Park House and Country Life Museum.  Days ago I dismissed it thinking, “oh, another farm museum,” but Noreen peaked my interest, and a quick IPad look convinced me I had to take in this free national museum.  The original estate is there with two rooms open – the library and a drawing room, gift shop and food in refurbished stables, but the museum itself is the modern complex to the rear.  Glad I went, and thankful for my little Canon because I snap images of all the history panels that I want to remember.  This museum is based upon the collection of folk arts and crafts saved prior to total disappearance to explain life in Ireland from 1850 to 1950.  In addition there was an excellent history on the famine and land law problems, which along with the book I bought there may help me.  (At the gift shop at Kylemore Abbey I saw the ATLAS OF THE GREAT IRISH FAMINE which Amazon will be delivering to me today.)

Door out of library with “faux books” Seen this effect before in England.

After almost two hours there I continued on to Strokestown where I was in my element for the next three hours at the Strokestown Park and The National Irish Famine Museum I bought my ticket for the 2:30 tour of the house and bought lunch to wait the couple minutes.  As you may know, I like original when possible, and that is what you experience in the house.

An interesting tale of ownership in one family, neglect and selling off of some heirlooms to survive, purchase by a local businessman needing a few acres for expansion of his automobile dealership, and then discovery in the attic of the original records of the estate dating from the time of the famine in late 1840s.  With a wonderful social conscience from his discovery preservation began, and utilizing the documents found, the idea of the famine museum materialized.

Here is a look out the library window towards the ruins of an early church.  The guide mentioned the Victorian romantic vision of ruins in view.  Much like the need for people to take a Grand Tour, and the same reason people were fascinated with Fort Ticonderoga when it was in ruins and they traveled to see it.

The house is deceiving.  A relatively small center part, but flanked by curved accesses to kitchen spaces on the left leading to servants areas, and stables etc. in matching architecture flanking to the right give the impression of grandeur.  A tunnel (I was given a personal looksee) connects the two flanking wings so the servants need not been seen as they travel to carry out their tasks.  Much of the furnishings, personal photos and momentos  are original as purchased with the estate from the owners who were then given life tenancy.  The interior is untouched, worn carpets, peeling paint, faded wallpaper and left as it would have appeared in the 1930s.

Parlor with guide and other two guests

Man of the house’s bedroom

Dining room – note ice chest on floor. Original wallpaper faded had been covered by a brown burlap hiding the fade around sold paintings

Toys discovered in the attic

The museum in restored stable areas is impressive with famine details and history of the poor and workhouses.  The intent is to give the contrast between the manor estate and the lives of the poor tenants.  I later quickly toured the formal gardens, but if was still earlier in the year would have spent much more time in them.  As it was, I was toured in the home with just one other couple – the advantage of off-season travel.

And, you know I like shadows and windows.  Here are a few in the kitchen

After almost three hours there I headed to my B&B, and once I settled before the fire decided that even a little Irish pub could not pull me away. 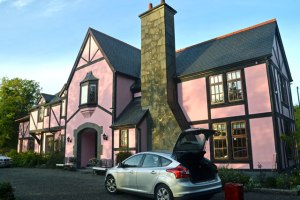 Unpacking at my B&B 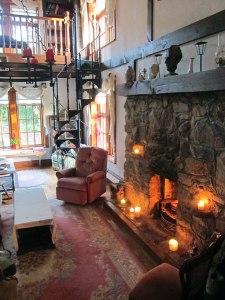 How could I leave this for a Pub?

I had a restful night, easy drive in the pouring rain to the Dublin Airport this AM, and have prepared myself for the flight home.  I have no idea what is next, but then I have said that before.  Thank you for traveling with me, as always, yours, RAY

PS – and now with no plane at the gate at boarding time, they are handing out meal vouchers, and next information is 15 minutes after takeoff — next trip might be sooner than thought!  With luck the next voucher will be for a room in Dublin.