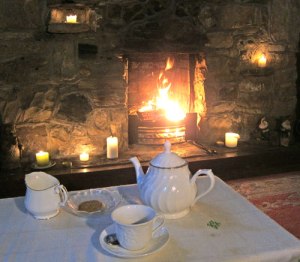 I am writing this in front of a fire on 17 October in Longford Country House positioned an hour and a half from the Dublin airport.  I know how to find B&Bs, and it is too comfortable to go out to eat, so I must get to writing.  It seems like weeks ago I left The Burren for Westport.

When I did, I made one more stop recommended by Conor – the Corcomroe Abbey, a 13th century Cistercian Monastery hidden in a quiet valley and noted for its detailed carvings and ornamentation.  I have lots of images, but here are just a few of my favorites — remember whenever you see thumbnails to click on any image to open up a slideshow gallery.

Note the vaulted ceiling is made of stones

Have to give you my favorites in “large size” 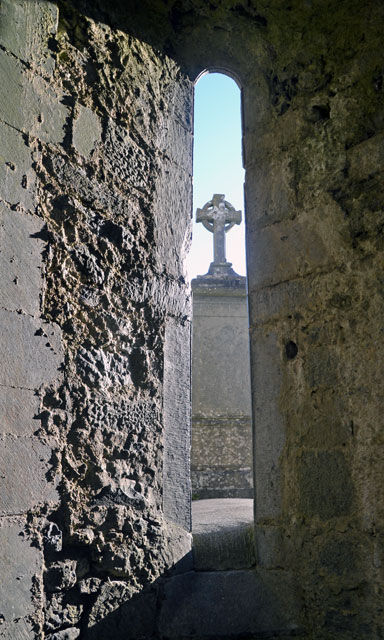 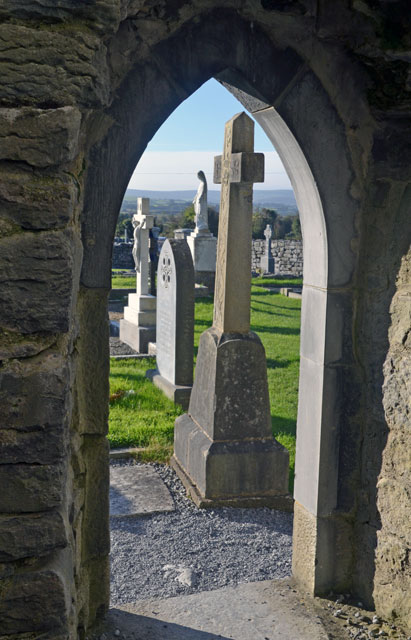 From here I thought, “instead of the direct route back to Galway, let me explore The Burren a tad more,” so passing out the lane I turned left instead of right — soon I thought that wrong — but a great adventure.  An adventure that gives you RAY’S REVIEW OF ROADS.  There are few Motorways in Ireland — analogous to our limited access interstates.  National Roads – major byways between towns, are in rare instances divided highways, but usually two lane roads ranging in width from comfortable to opportunities for opposing rear view mirrors to kiss (or worse).  Motorways are designated with a M, Ns are National roads, and a road with an R and its number is a regional road.  I found regional roads from comfortable to hoping to meet the oncoming car without brushing it or the hedgerow.  I left the Abbey on an R road looking for a certain L road (Local road) to cut over to Gort.  Local roads (paved or dirt) can be wide enough for one and a half cars, or wide enough for one – plus or minus a few inches – resulting in more than kissing mirrors.  I made a left turn where I thought the L should be — it was not — after squeezing a number of kilometers up into beautiful terrain I figured I would not be meeting too many folks.  And, when I did, quick decisions have to be made as to who is going to try to duck into a rare open spot or back up.  The hour I was trying to find my way out of this masterpiece of shunpiking I wrote my review of roads in my mind.

I followed N84 from Galway towards County Mayo, the only way to go, 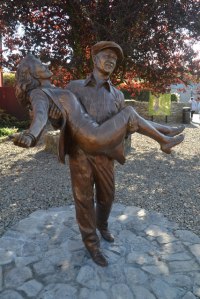 THE QUIET MAN STATUE with “The Duke” and Maureen O’Hara

but with Rick Steves in hand.  Cong is the first sidestep, and worthwhile.  A quaint village noted for its Abbey dating from the early 1100s and adjoining forest area, and the location for muh of the filming of the 1951 John Wayne and Maureen O’Hara classic John Ford film, THE QUIET MAN.  Although two generations ago, the town still touts that fame.  I wandered all the streets, had lunch at the Hungry Monk Cafe, and poked into the forest.

I ate at the Hungry Monk Cafe

Entrance to the forest 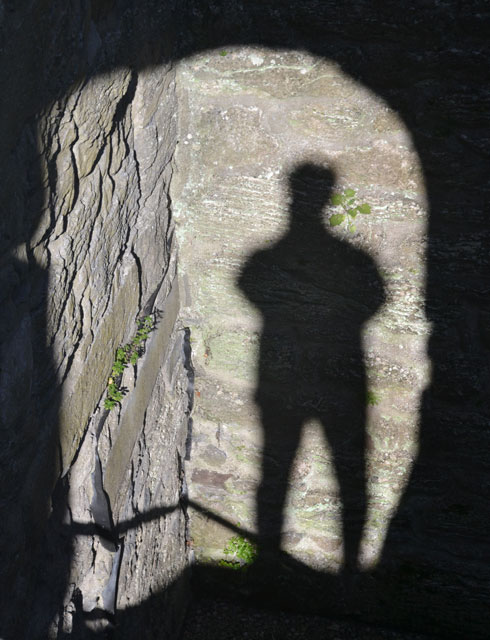 Soon I arrived in Westport, and easily found my magnificent c1830 Georgian B&B, the Boulevard Guesthouse.    (as an aside — everywhere I now  see TripAdvisor.com decals on windows.  In Galway I was talking with a lady in the B&B who said she uses the site exclusively and selects places in the top 10%.  I have filled out reviews, and do look at them — every little bit helps, so check out TripAdvisor.com) 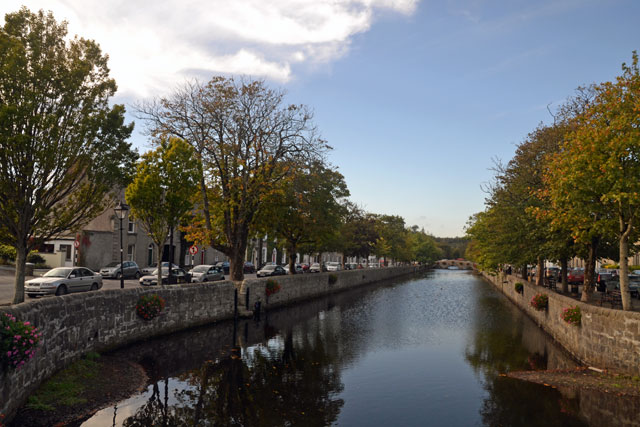 Outside The Boulevard Guesthouse in Westport, Ireland

Sitting area outside my room

Wednesday’s plan was to follow the route southwest through the Connemara recommended by Rick Steves (really only one route, but he points out the spots to see), and then (again thanks to Conor) I decided I would experience Achill Island northwest of Westport.  Wednesday ended up being a great deal of driving (as has this trip in general), and that is because in the West it is mainly nature and scenery to experience and not the museums and historic sites that I am drawn to and spend hours at.  But you know I like to  drive, so it is not a problem, just kilometers.

On the way out of town I stopped at the very small Westport Heritage Centre, and I am so glad that I did.  I always have to know an area’s past history and development (the whys and hows).  The volunteer explained, using this large model of the area, 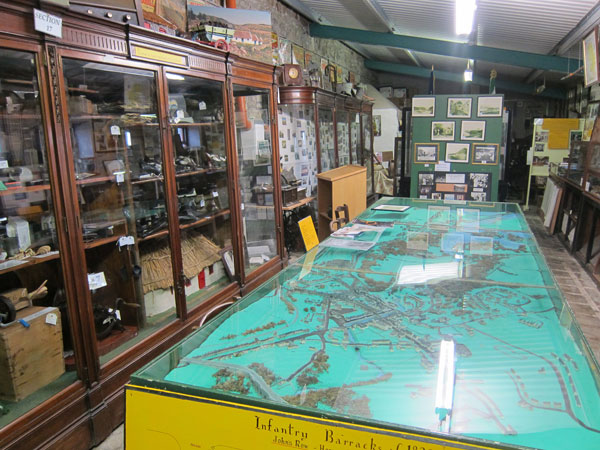 that in the 16th century  there were tower forts around the harbor, and a lady pirate, Grace O’Malley, or Granualie, ruled the bay (plan to read the book about her). In 1730 a descendant built the Westport House on the site of the tower at the inner point of the harbor, with the town adjacent.  But in 1780 to get the workers and tenants out of the front yard, a new town center was planned, one of the few such planned towns in Ireland.  The river in front of my B&B was straightened to make an attractive promenade.  After 300 years the Browne family still lives in the house.

Then striking out on R335 you first come to Croagh Patrick, a 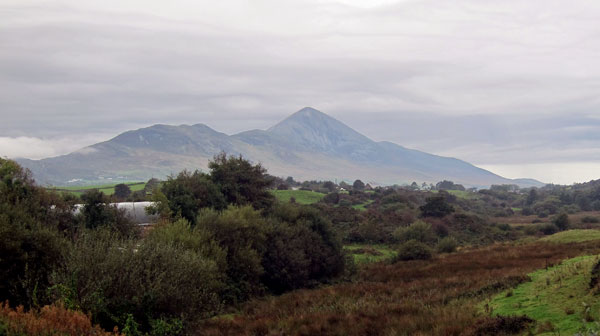 small but imposing 2,500 foot mountain where St. Patrick supposedly fasted for 40 days of Lent and then “drove the snakes” out of Ireland.  Hoping to learn some history I pulled into the pay parking lot for the Visitor Center.  Pay and Display machine does not make change, so for 2 Euros I found out there was nothing in the Visitor Center except cheap souvenirs and food.  So, Ray Recommends — don’t stop unless you want to make the 3 hour hike to the summit.  The scenic drive continues to Louisburg where the road turns south through some of the most rugged and barren looking scenery in Ireland in the Doo Lough  Valley. 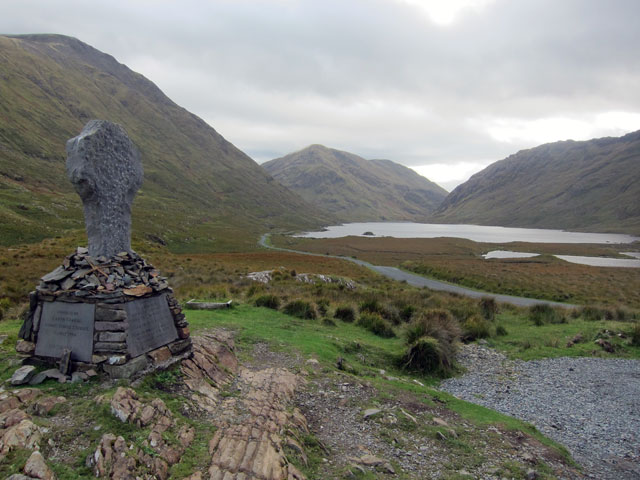 Only a monument along the way honoring a famine tragedy in the area, and sheep, lots of sheep on a road too narrow for sheep and car.  At one point two little ones jumped out of some bushes on a slope 8 feet in 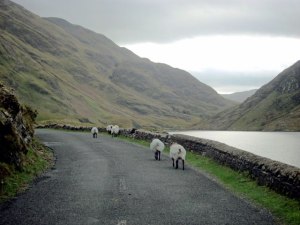 Out for a stroll — EVERYWHERE in this area

front of me.  Screech, and no time to get that on “film.”  Soon the road comes alongside the long Killary Harbor, considered to be in a fjord (small Irish size compared to Norway from what I remember – yes been up the fjords to Bodo, Norway in a past life).  At Leenane you loop down the otherside, and the treat (thanks to Rick) is to find this unmarked Peat Bog. 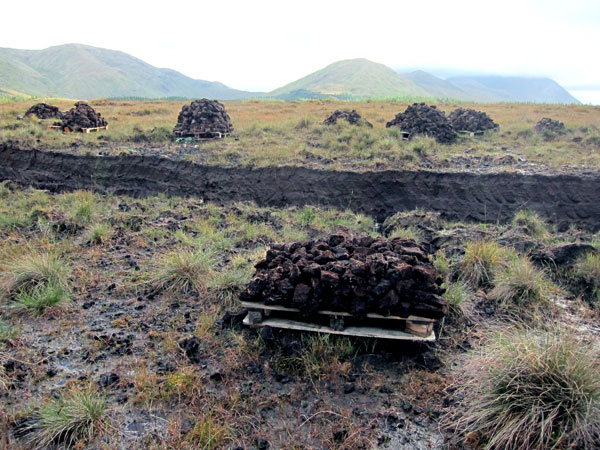 Peat Bog showing where cut with a spade, and stacks

not something you see in the states, so here is another image and two videos: 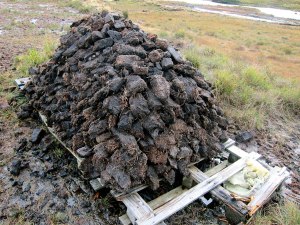 Before heading back towards Westport I stopped at the Connemara National Park which was established to preserve the dwindling wild bog areas after which I pulled into the Kylemore Abbey, but with no desire to see it. 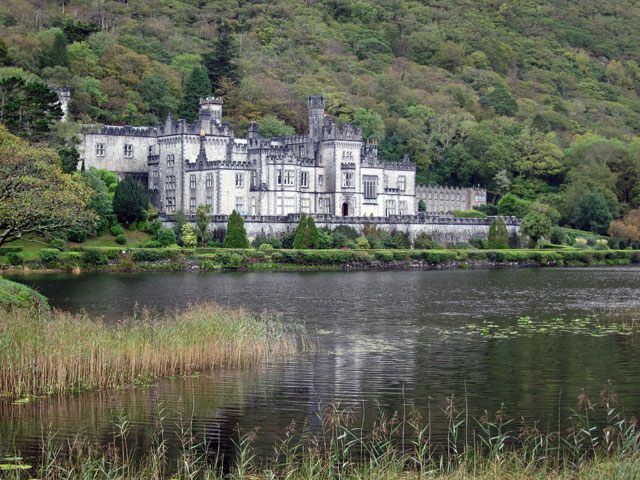 Northwest less than an hour from Westport is Achill Island, Ireland’s largest island (connected by a bridge).   This was another totally different view of Ireland than what I had experienced before.  It is a vacationers’ area with beaches and hiking and biking trails, and remote.  Archaeological remains are here too, and I hiked to see the Deserted Village on the slopes of Slievemore Mountain.

Another view of the Deserted Village

One last one, but many more in my computer

And, as I was leaving the sun final came on strong. This is looking east back at the Atlantic Ocean 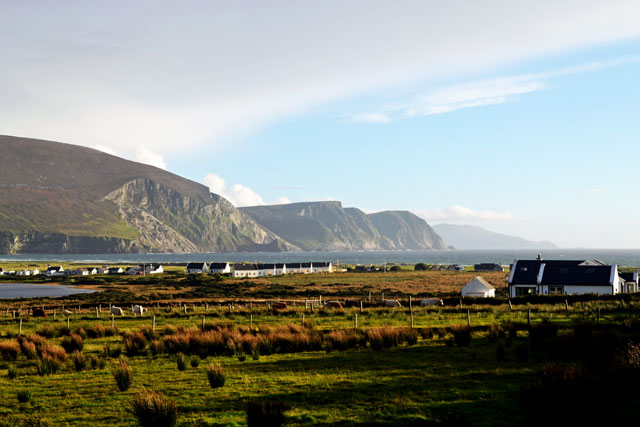 WOW — that was a great deal to show you — but I told you I did alot of driving.  Today, Thursday, was not as much driving, and I got to spend hours in 3 museum areas — so, will probably work on that post at the airport, since I want to finish this up and post it.  Good night, RAY

PS – just looked at my notes — fast fact to share that I learned from the volunteer at the Westport Heritage Center where she had the half-door open at the top.  The reason there were half-doors (or, Dutch Doors) in early homes was to let in more light.  Homes were taxed based upon the number and size of windows.  Thus, windows were small and few of them.  Leaving the top half of the door open let in some light and prevented the tax collectors from additional DAYLIGHT ROBBERY.

This entry was posted in 2013-c - IRELAND 2013, Uncategorized. Bookmark the permalink.