I just looked at my new clock, and see that it is Monday.  Intuitively I also know that it is Christmas Eve.  Last evening I watched WHITE CHRISTMAS (a small tradition of mine) and tonight I will watch IT’S A WONDERFUL LIFE.  I then reviewed and made a list of my blog posts from 2012 and December 2011 before falling asleep.  I see that on the 24th last year, I shared the live nativity on the common in front of my house with you.  I also noted that many of my posts began, “I just feel like writing,” so here goes.

Most of you know that I am now “laid-up” for the next 6-8 weeks following foot surgery.

Note my directions, and Doctor’s initial

Tuesday the 18th I had a large bunion removed from my left foot, but more importantly had the big toe completely fused with screws and a plate following removal of gouty residue which we assumed may be there.  And, yes, prior to an operation on an appendage the patient can mark the correct spot along with the doctor.  Of course I went a tad further with full initials and an arrow to the spot!  Friday when I had my first post-op doctor’s visit I learned that my hour operation took almost two hours because my fine surgeon, Dr. John Gregory, did not like a spot one screw went into soft bone tissue and he essentially redid the surgery relocating all to a different location.  I have had no pain at all – NONE.  I do seem to have a high tolerance for pain, but we also know who is looking after me!  I am taking the overly cautious route of minimizing my movements around the house, and in not going out taking the risk of bumping the foot and damaging the healing process.

I returned from England on 2 November with pain and walking problems (worse this time than after my other 2012 sojourns), and after two visits with my foot surgeon opted for surgery.  No one chooses elective surgery over the holidays so I grabbed the first date after A CHRISTMAS CAROL was done.  Of course, that way I will be able to start traveling with 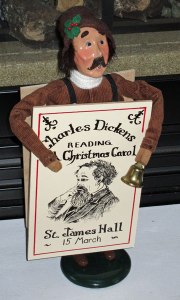 ease sooner.  The five weeks spent on our fifth annual production again was very gratifying (and kept my mind off the walking problems and impending operation). Our 4 nights of performances were attended by almost 500 people, and the cash contributions totaled almost $3700.  The total cash contributions to the local area food shelves for our first five years have now exceeded $16,700 – not too bad!!!

This evening, peering out a window, I will only be able to get a partial view of the live Nativity on the common.  “On my list” was to acquire an old large Nativity set, and I stumbled upon one in March in an antique center in Massachusetts.  Once I verified that all the figures were there in the original box I could not write my $45 check fast enough.  The dealer had marked it 1960s, but in my researching the Japanese hallmark and the store it was originally sold in I am sure it is from the mid 1950s. 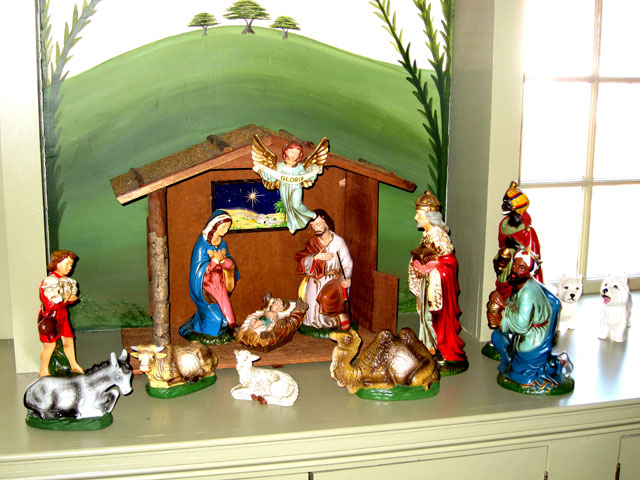 I did get some of the house decorated for Christmas, mainly my miniature tree collection in the kitchen and part of the dining room.

Part of my tree collection on the kitchen mantle 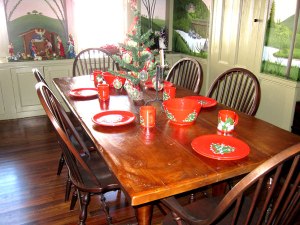 Part of my review of last year’s travel blogs was to start thinking about what I would do in 2013.  At this time in 2011 only the Yellowstone adventure with Betty, Scott and Rich was planned, but evolved into about 72 nights away from home.  Nothing is in the works for 2013, but I am not worried – things just happen.  I went to sleep deciding that my first adventure will be to return to my favorite Red Lion Inn in Stockbridge, Massachusetts.  This morning my TravelZoo email was offering a Berkshire special – The Red Lion Inn.  I immediately bought my voucher (good until late May) representing an over 40% savings for two nights.  I may just have to buy another.  I remembered in my review that I could not share Pompeii, Sorrento, The Isle of Capri, the Amalfi Coast and Positano with you due to my laptop being hacked.  So as I convalesce and start developing travel adventures for 2013 I will share 2013’s ideas with you along with some “catch-up” for 2012.

As always, yours, RAY

and, this image taken at 8:30 Christmas Eve from my front door of the Live Nativity on the Common.

This entry was posted in Thanksgiving and Christmas and tagged 2012, Common, Live Nativity, Walpole NH. Bookmark the permalink.