But as you know, this is my time for A CHRISTMAS CAROL, and this year will be our fifth 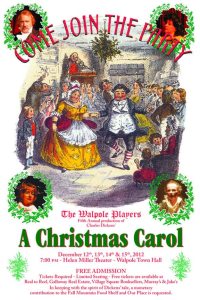 annual benefit production by The Walpole Players.  Last year I had many “hits” on SHUNPIKING WITH RAY when I talked about our production, and knowing that helped fill the audience, in September I started a new website for the players www.thewalpoleplayers.org where, if you ended up on this page on your internet search, you can click on for all the details.

This time last year in 2011 I had no travel plans for 2012 other than the fantastic winter Yellowstone adventure in January with Betty, Scott and Rich.  That lack of plans ended up with 72 nights away in 2012 (not including some nights at David’s) with three trips to Europe, two to Canada, two trips on Queen Mary 2, and some “little trips.”  I have nothing planned at this point for 2013, but am not concerned.  I will wake up with a thought, and go do it.  I do, however, have to get to Africa (sounds like a safari) and South America to have been on all continents.

In February 2010 I was scheduled for foot surgery, but cancelled that operation when I was feeling and walking better.  The restoration of Black Beauty occupied 2010 prior to my trip around the Aegean Sea, and then I went into full travel mode in 2011 and 2012, essentially without any hiccups.  My left foot acted up, however, following several of my 2012 trips, and the time in July with David and family sailing I was not mobile at all.  Pain and lack of mobility overtook my life upon my return from England on 1 November, and I began attending (as patient) several doctor appointments.  Cathy would always ask a professional, “if it was you, what would you do?”  Asking our foot surgeon, Dr. John Gregory, he replied, “I would have had the operation 5 years ago.”  End of issue, and he operates on me on 18 December. When I told Tara (my co-conspirator with A CHRISTMAS CAROL) she said, “oh no!”  “Tara,” I replied, “it is after A CHRISTMAS CAROL, I would even postpone a heart transplant for A CHRISTMAS CAROL!”

Actually pretty good timing because with the recovery of 6-8 weeks that is still well before world-travel time.  And, it gives me lots of time with “nothing to do” to plan those trips.   I get as much (if not more) enjoyment out of the planning as the actual execution.  I have lots of research and writing projects I have not been able to get to including adding a great deal of shunpiking and travel history to this site.  I envision filling my prone time (with foot elevated) with words – both in writing and reading.  You may even read of my planning here – but hopefully not be confused (like last January on QM2) thinking I am really away.

I have been working on what to tell you here and think I have it all covered, but just wanted to get something out after 4 weeks since my last post, and also (not knowing if I will have time beforehand) wish you all a very Merry Christmas and happy Holiday Season.  As always, your, travelling correspondent, RAY

This entry was posted in Miscellaneous Musings, Uncategorized and tagged A Christmas Carol, Walpole Players. Bookmark the permalink.