This has been a tough year to do anything. COVID has closed travel opportunities, and what has remained open has become expensive, and crowded. I “do not do crowds” and want to stay safe for travels in years to come — yes I have lists of great travels and explorations as I was able to do in 2019. But I needed a “get-away,” and as you have read, the past year I have enjoyed properties owned, meticulously restored, and offered by LANDMARK TRUST USA. In fact, with the additional stay I have planned, in just over a year I will have had my head on their pillows for almost five percent of my nights. Ironically, it was 10-12 November 2020 that I first experienced the Amos Brown House, the oldest house in Whitingham, Vermont.

Even with a one hour, 48 mile trip I can find many routes — routes that others are unaware off. I was off to Guilford, and Green River Village – I last found this little spot when exploring Vermont Covered Bridges, 1 July 2017 — I meant to get back often, and now will for sure. I had fallen in love with this for a picnic spot. There are tables to the left over the mill pond.

I had my paper 1985 Vermont Road Atlas, and was going to wander on roads not yet travelled through Halifax and West Halifax. I soon learned a 35 year old map may not be accurate, well unmarked roads more the problem. But when on dirt with this color – what is the problem, and what is the problem with not knowing exactly where you are – hey, eventually I would find a corner I knew.

plan was to get a sandwich at the General Store in Guilford or Jacksonville. Checking hours on-line I was dismayed to learn that the Jacksonville store was yet another COVID casualty. In searching for hours I stumbled on a Brattleboro newspaper article citing its closing in October — help was unavailable, and with a slightly remote location they no longer got meat and other deliveries. Short of drivers it was not worth many a company’s time to make the trip. Sadly I never made it in during its 128 year existence.

and, then it was down Route 8A in Whitingham, one right, two lefts on dirt roads, fantastic trees and leaves on the ground and, up the last incline…

to the Amos Brown House, the oldest house in Whitingham, and set bucolically on 30 acres of woods and fields.

the views below in my first “gallery” taken from the parking area across the, of course, dirt road. Make sure you look at the post of my last stay for a tour of the inside of the home, or visit the Landmark Trust USA website — just don’t book a stay when I wish to go.

My Friday plan was the visit a few spots in North Adams and Adams and find the East and West Portals of the Hoosac Tunnel – never taken the time to turn off the Mohawk Trail to do so. I had lots of route choices, but decided upon Tunnel Road heading south out of Readsboro, which is a tad west on VT Route 100. WOW — plans for more explorations on this historic route following the Deerfield River. Here are two views in Monroe, Massachusetts (population 121 – not a typo). The left image is looking south on the river at the old paper mill, and on the right looking north at the dam and power generation. Also in this area is the site of the Rowe Nuclear Plant – the second nuclear power plant in the US beginning in 1958.

the map below (found at one of the Great River Hydro recreation sites) gives an idea of all that is in the area for power generation, and recreation. One sign said that 10% of our renewable energy in the US is hydro generated. 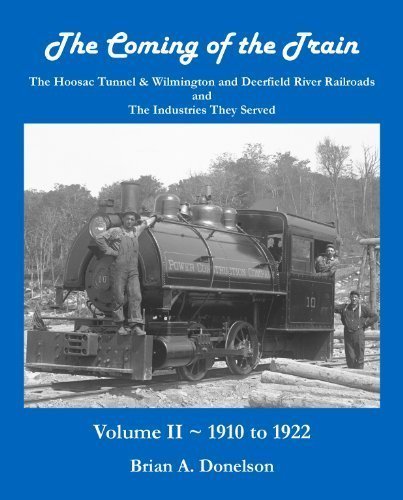 so much more to learn and explore. Of course, when I returned to my abode for the evening I spent time on-line trying to learn more about this section of river, the rail line that followed the Deerfield River here, and joined with the line going through the Tunnel. In reading one newspaper article I learned of THE COMING OF THE TRAIN – a two Volume Set written by Brian Donelson. Published at different times, I was able to purchase Volume II on the way home at the indy bookshop in Wilmington. But the earlier volume I found usually runs around $500 — but you know my search abilities, and I snagged a copy for a tad under $200 — already into Volume II, so glad I got them – so much to learn – so much to explore — and so close by.

I will have to write about the building of the tunnel to share with you. Quite a feat, decades of work for over four and a half mile tunnel that runs about 1200 feet below The Mohawk Trail in Florida (Massachusetts that is), and the loss of much life. Here is the train bridge crossing the Deerfield River just before the tracks disappear into the tunnel.

later I found the West Portal. Posted, but sometimes you miss a sign or two. Once I climbed a grade and found the tracks, the entrance was still a ways off, so I “read the signs” and turned back.

On this day’s short outing (Saturday – never went out on Friday with all the rain coming down) my strong desire was to see the North Adams Historical Society, located (of all places) in the Holiday Inn. So glad I did. Upon entering the docent said they had just gotten notice that the Inn had been sold and they will have to move (and to where?). A group that includes Nancy Fitzpatrick (owner of The Red Lion Inn and The Porches) is the new owner, and wants the space. I chatted with Nancy’s parents many times in Stockbridge. Nancy does not know me, but I had better talk with her — the museum’s exhibits there are wonderful, starting with this train display of the town with the West Portal of the Tunnel on the right. The schedule board is from Grand Central Station having been for the train to North Adams coming through Danbury – gee, was at that station a month ago.

now, here was something new for me – click and read

if you get around with your curiosity, you know the round brick building in the center is where the gas is generated — get to Concord, NH, and see the treasure there.

you know my “rocking chair studies,” well, where do they belong? On porches of course

this winter I read about five books about the French and Indian Wars in this area, and Fort Massachusetts. In one room there was a great exhibit on the fort – the location just a tad west on Route 2, and I have shared that with you in past posts.

Hoosac, or Hoosic, I was thinking I should ask the docent, and then I turned around in another room and saw…

It was then back “home to Amos” and on-line research on what I had newly experienced on the drive to North Adams. But along the way on 8A from Charlemont, there was a stretch I had not been on, and just before the state line —-

do you know what a 1957 Chevy is worth? I have an idea. I sold my 1956 Two-Door Hardtop Belair with a super dual exhaust for $350 in 1967 — today over $75,000 (depending on condition). Condition of the passenger side below pretty nice, but that appears to be it. The “Chevy Ranch” sign? Made of license plates.

And then back and time to settle in with the first book in another David Baldacci series, ironically the main character being another Amos – Amos Decker. What a great read — I finished at 1:15 AM this morning Sunday. But still up in time for one of the reasons you stay at the Amos Brown House – the sunrise. My last morning the weather was right, and at 6:25 AM it started – yes that is snow on the ground.

Stay safe and well, as always yours, love, RAY