I am not the only one who, in the last 200 years, has thanked DeWitt Clinton for his “Wedding of the Waters.” Originally 363 miles from Albany to Buffalo, I have been curious about the Erie Canal for years. I still have a long way to go to experience it all. In September 2008, I took a three day, two night, cruise on the canal from Albany to Syracuse. My curiosity intensified. I later explored canals and narrowboats in England and Ireland (sadly not taken a trip), have dug into Erie Canal sites on my previous trips to western New York, and detoured on other shunpiking adventures when I learned of nearby canals in Pennsylvania. In Canada I took a week long adventure on the Rideau Canal in 2011.

The New York Thruway, for the most part, follows the Erie Canal across the state. Thus the canal is accessible from many points along the way. On Friday I planned to see many of the canal towns from Lockport to Rochester (I did spend an afternoon at the Lockport Canal Museum in October 2014), But when I learned I could only see the Pan-American museum that morning, good old flexible me made some adjustments. So, on the way to Rochester I only got to Brockport and Spencerport – both deserve return visits.

In Brockport I met my first Lift Bridge.

The roughly 60 miles from Lockport (at the Niagara Escarpment) east to Rochester is basically flat with no locks. But bridges are required for traffic to cross the canals. Where long approaches are not possible to have a bridge high enough for boats to go under, lift bridges were installed, and the entire bridge is raised at once with counterweights – fascinating. And, as you can see below, as I turned around for this image, often the canal in not dug down, but built up.

When the bridge is up, you can climb the stairs to cross the canal on the sidewalk that also raises with the bridge. And, worrying about the ground level sidewalk, I learned that a barricade raises up with the bridge. 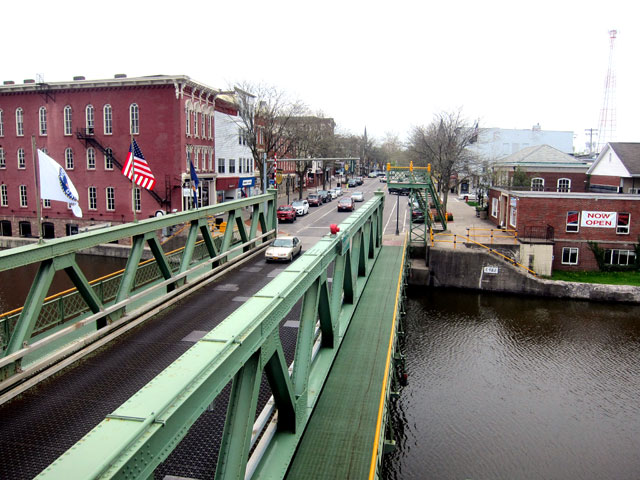 Down the road in Spencerport, this old trolley station was moved to provide a small museum, but in the lower level are facilities for canal boaters to use.

a fantastic interior, on display is an extensive collection of telephone equipment used and collected in the area.

this working model of a Lift Bridge helped me understand.

and, right outside the museum, boaters can tie up, use the facilities, go into town, and spend the night. 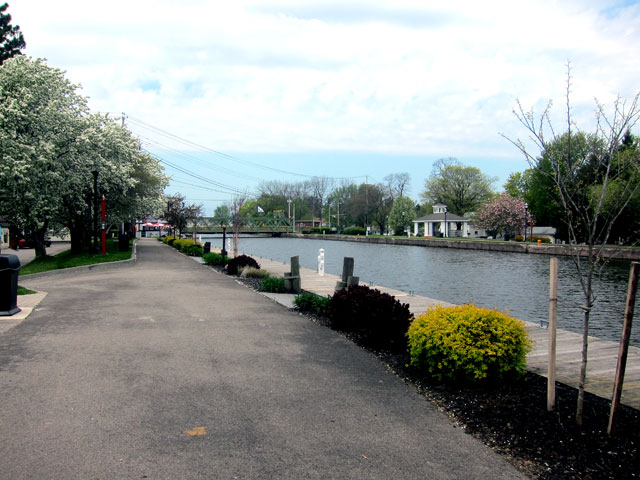 Leaving Rochester Saturday morning, and following the canal, I got this image of Fairport below, and a different style Lift Bridge. 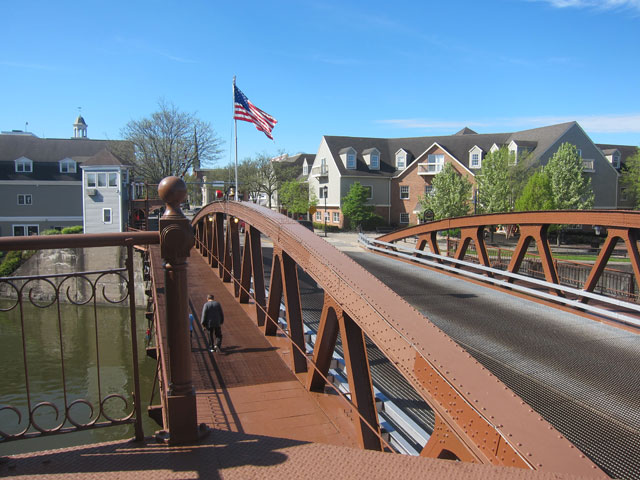 I crossed the canal near Lock 30 in Macedon (where I may someday rent a boat) to Palmyra. I was on Route 31, which I was on years ago, but going in the opposite direction. So, I did see things differently, and more based on my research. Before entering Palmyra I stopped at Lock 29 and Palmyra Aqueduct Park. I stopped this time for a detailed visit.

I spent some time chatting with the lock attendant. This fellow, and the next one I visited, with were both a wealth of friendly information. Both loved their jobs, caring for their locks and grounds, and helping curious visitors. Both fellows were proud of their work.

The equipment is fastidiously maintained.

Controls to open the locks

Moved to the park was this rescued cross-over bridge for the tow animals. 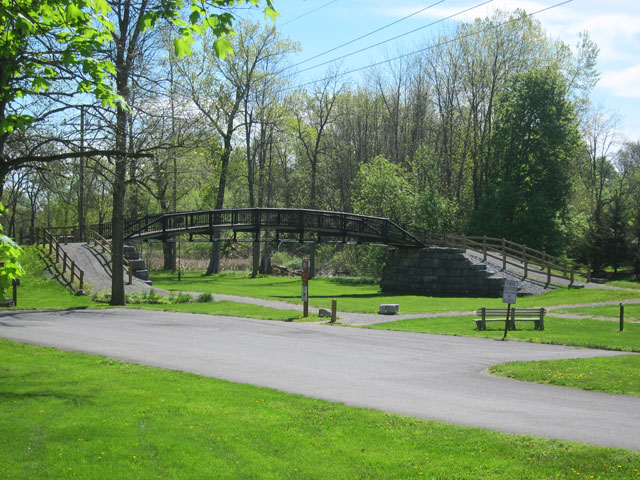 I then arrived in Palmyra. I had passed through before, but did not know the TIME-CAPSULEs here and that Palmyra is the birthplace of the Latter Day Saint movement. Founder Joseph Smith, whose family lived on a farm, started it here. The first book of Morman was printed here, and to top things off, Henry Wells, founder of Wells Fargo and American Express, came from here.

The TIME CAPSULE – the five Museums of Historic Palmyra. This canal town is an architectural and historic treasure that must be visited, and I need to go back.  You know I love old country stores and letterpress printing – two of the museums are the original store, and a print shop.

a close-up of the facade shows changes over the time. What looks like Victorian cast-iron features are actually applied features over wood. See the small addition to the left of the store above? The canal was originally right next door with the store entrance there (before the addition). Fights were always underway by canal boaters vying for loads, and ladies would not go to the store. So, a new owner changed the entrance to where it now is facing Market Street.

Inside – WOW. Living quarters above, unchanged with three generations. The senior shop owner in 1940 said to his daughter, “I am done, the store is yours,” and he locked up. The store never opened again, and stayed untouched until after her death in the late 1970s. It was in the early 80s (if I recall from the private tour) the society acquired the property. I would imagine the shelves have been restaged, but done so with items that have always been in this building. – Unbelievable. 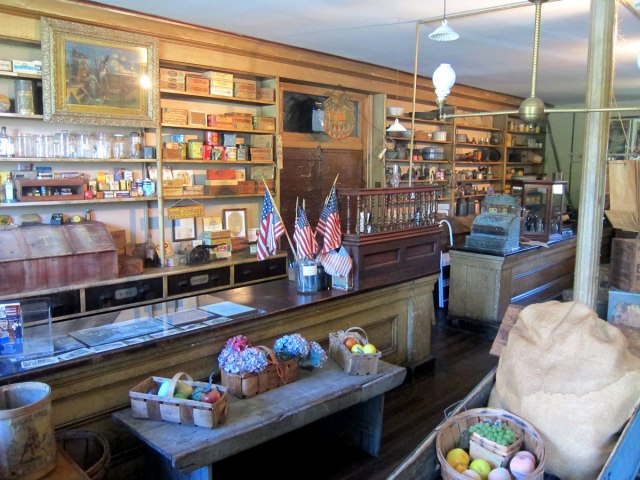 I would love to add this peanut machine to my collection

Did I say the doors were locked in 1940, and everything left as is? Here are eggs that were for sale that day – now almost 80 years later. 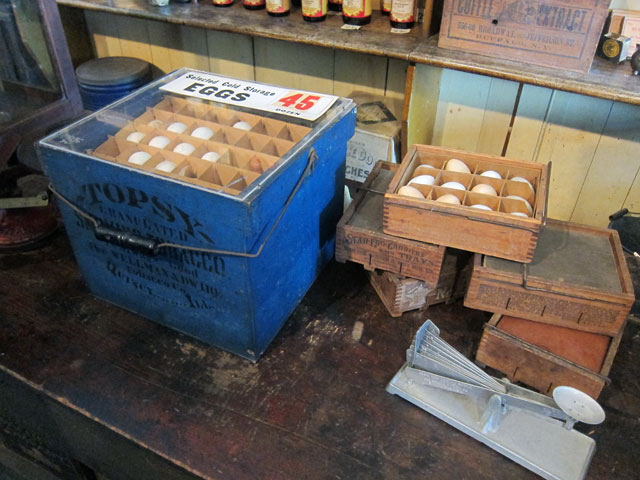 Three generations of the same family had lived above the store, and little was changed from one generation to the next – you have to visit in person. (remember you can click on an image to see a larger view)

Note cistern for rain water above the sink.

Some of the original ceiling stenciling. 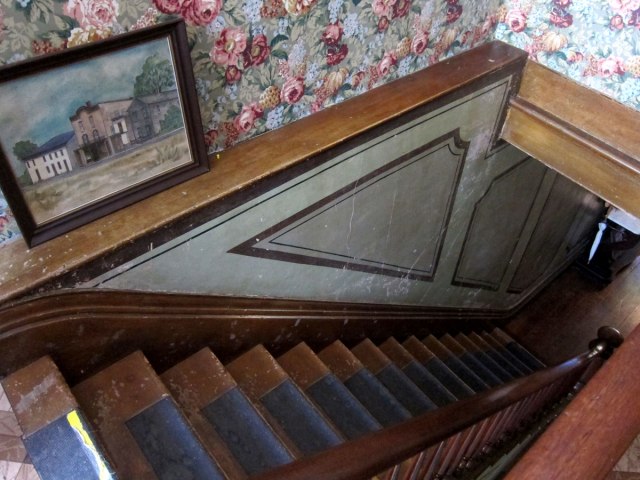 I have never seen such an elaborate hall tree.

You are toured by a docent from building to building. The main building, an old hotel, you can roam the exhibits, each room devoted to another aspect of local history. I have not included images of the original canal office where you bought tickets, but of interest, the mules were kept and fed in the basement with inclined walkways originally there for entrance and egress. I really enjoyed the print shop – one of the most extensive letterpress collections I have seen in one place.

and, on Main Street (I stopped in, will visit next time) is the Grandin Building, the site of the publishing of the First Book of Mormon. The press was on the top floor on the left, bindery in the middle floor, and book shop on the lower level. 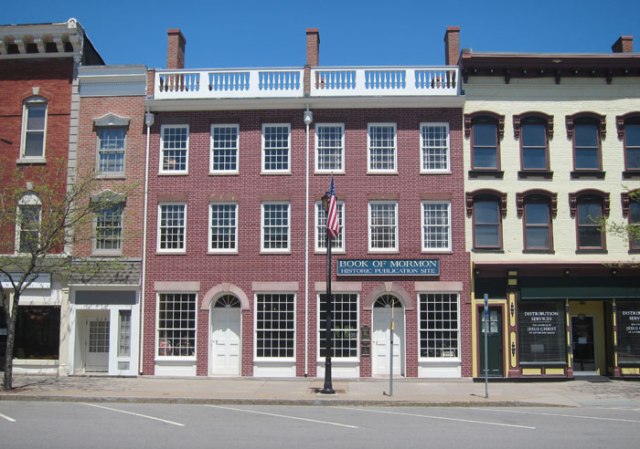 Another must do in Palmyra is to attend the annual Hill Cumorah Pageant – although I heard it may only be held two more years. Over 600 people are in the pageant that is performed before thousands – and it is free. The pageant describes Joseph Smith’s  encounter with the Golden Plates, then translated into English as the Book of Mormon.

Moving along because I wanted to get to the canal park in Camillus, I next stopped at Lock 28B in Newark, which is also the site of old double Lock 59. The young attendant got his job just days ago. Now a part-timer, he was a wealth of knowledge, really wanted his site to shine, and would like to become full-time, year round staff. I recommend he be hired.

The interior of the old power plant shined. No longer used, it could be started up again to generate electricity to power the locks. The generators are powered by water driven turbines beneath. At many of the locks power plants were part of the facility before rural electrification made its way. 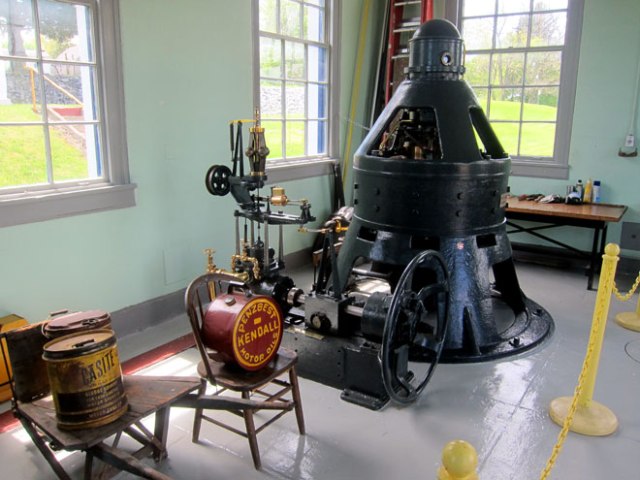 and then the young fellow walked me across the street to tell me what he knew about old Lock 59, and how he was going to improve the property.

originally the lock doors were opened by manpower, and you can see the foot treads to provide traction while the gate-keeper was opening the door.

I was running out of time and wanting to get to Camillus, I headed down to the Thruway, and headed east. But, I saw a sign, “what is this that I did not know about?” And, I turned in off the Thruway.

Never having seen the  PORT BYRON OLD ERIE CANAL HERITAGE PARK, I stopped beating myself up for missing it since it has only been open for three years, long after my last trip heading east on the NY Thruway. And, an interesting story of negotiation between the Federal Government (on an Interstate Highway), the NY Turnpike Authority, Town of Port Byron, and the custodians, the Canal Society of New York State. You see, there was concern about people getting on and off the limited access Thruway, and competition from food vendors in the facility. It was all worked out, and you can enter from the Thruway or walk through a gate from the Town of Port Byron. Alongside the interstate is the 1854 Enlarged Erie Canal Lock 52, the 1894 Erie House Tavern, and the 2016 Visitor’s Center, which sits atop the footprint of the original canal. Forever you could see the double lock from the road, but now you can tour it, and the original canal tavern built in 1894. Remember I had a destination, but I am flexible, and spent over two hours touring the property, talking with the docents, and loving every minute. You can see the locks heading east on the Thruway – BUT STOP !!! 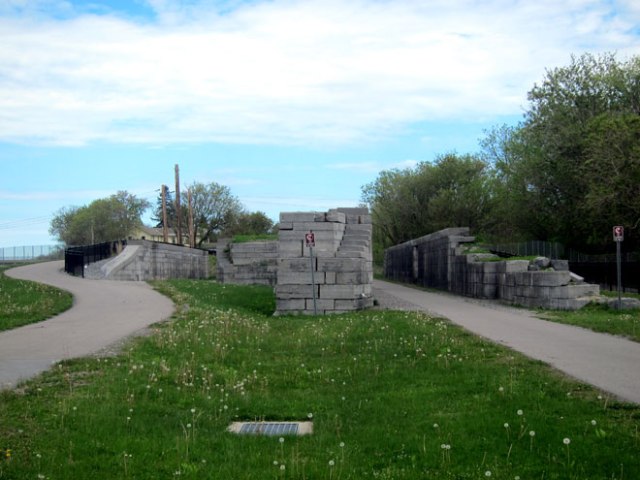 Built in 1894 was the Erie House Tavern. Closed when Port Byron went dry, it remained a home for the original owners, until the last sister (a teacher in Port Byron) died. There were hotel rooms at one time upstairs, and the Tavern room had been converted to living space.

you can see to the right side the blacksmith shop which was relocated to the spot with the help of old photos. Original items, including the bar, were found in the basement. Here is the tavern room still a work in progress – but gorgeous.

an original black and white photo, interpreted to be 1901 due to the Black Mourning Bunting draped outside, most likely honoring the assassinated President McKinley. 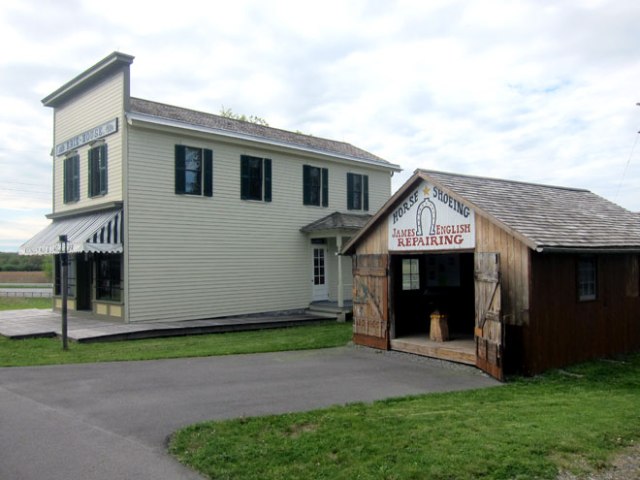 Many displays are in the visitor center, including this model of a double lock with the overflow tunnel shown between the locks. Note the wooden abutments before the stonework and the spaces allowing for the overflow to enter the tunnel – I clearly saw the overflow holes in old Lock 59. This model was exhibited at the 1893 Columbian Exposition in Chicago, then the New York State Museum. It ended up at the Canal Museum in Syracuse, but was relegated to the basement where it was rescued by the society and restored for exhibit here.

I chatted some more with the docents, bought a book, realized I was not going to make it to the museum at Camillus, chatted some more, and then “voted with my dollars” and joined the Canal Society of New York State.

Back on the Thruway, I figured I should at least see the Camillus park, and the aqueduct that I was encouraged to see. Getting there, I saw this sign that the park is essentially the mid-point of the Erie Canal. 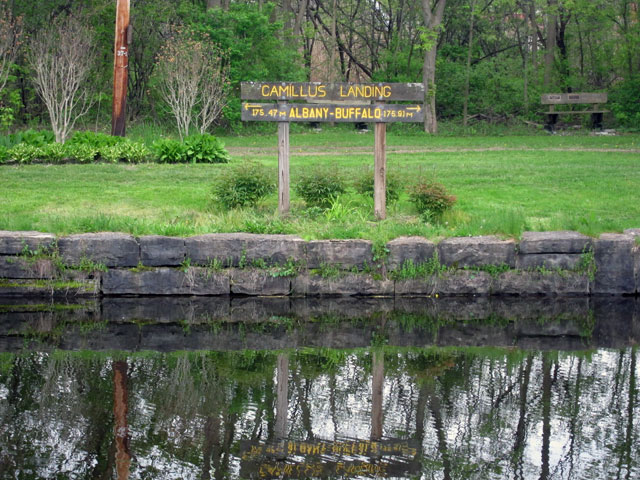 But the buildings were closed, but looked disappointing. So disappointing that I forgot I should have taken a walk to see the still used aqueduct – well, next time, and there has to be many next times for the Erie Canal for me. I ate quickly, and headed home.

RAY RECOMMENDS
1 – Explore the Erie Canal, its route, and old Canal Towns
2 – Plan to spend a day in Palmyra, New York for its architecture and museums
3 – When heading east on the New York Thruway, stop at the Old Erie Canal Heritage Park in Port Byron