ONE OF THE BEST CONTINUES – 8 and 9 OCTOBER in EAST AURORA, LOCKPORT and BUFFALO, NEW YORK

As I am keyboarding this on Thursday night, I must say that this has been one of the most educational and fascinating “group” trips I have experienced, and it will be leading to much more exploration and learning. Hey, keeping those brain electrons moving I will never, never get older – but you know that!

Wednesday morning October 8th we first toured the Elbert Hubbard Roycroft Museum in an original craftsman bungalow home that was gifted to the Aurora Historical Society in 1985 when the owner, Gladys ScheideMantel, at age 100, decided it was time.  We had a private extended tour, and it was not until the end that I saw “no pictures please.”  But it was a private tour, no one said anything.  And if you open up this slide show gallery you can get a taste of the simplicity and beauty, and richness of color and wood in the Arts and Crafts items.

Here is the richness of Roycroft Mission Style Arts and Crafts

Some more images from the Elbert Hubbard Museum.

How can you resist this green lamp?

We then walked over to see the Tiffany Windows at the Baker United Methodist Church.  I could not resist this image below.

I fondly remember the old faux asphalt shingle brick appearance siding on the house my grandmother was born in in the Bronx.  I love color and texture in my images, and that is captured here with the deterioration of this probably now 80 plus year old “home improvement.”

Not even trying to show you the church windows, here is just a colorful portion of one. 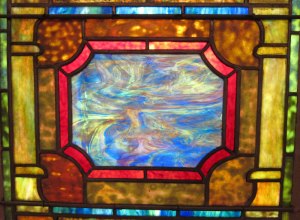 Two more churches were to be visited before the free afternoon, but I “ducked out” to take some more pictures of a table I saw on Tuesday in an antique shop that I thought son, Gary, would like, and had emailed him about.  But the main thing was my need to head north to Lockport, NY, to see the flight of five locks in a row with a change in elevation of 60 feet.

I arrived in Lockport, got an email from Gary saying, “awesome, get it!,” so I called back to reserve the table and will load it up on Friday to make the trek east and eventually to Gloucester, MA.

My Goal – the Lockport, NY, Flight of Locks.

The biggest challenge in building the Erie Canal was probably the elevation and rock formations at Lockport.  I asked the right questions when I walked into the little museum.  How dumb can someone be I have reminded myself.  From Lake Erie to the Hudson River there is a drop in elevation of over 500 feet – thus the locks – but there is 60 feet in Lockport.  Now, looking at a map with Lake Ontario north of Lake Erie (and connecting at Buffalo) one would intuitively think that water would flow “down hill” (south) into Lake Erie.  Dumb Ray!!!  You forgot!!! The flow is north and out the St. Lawrence River eventually, thus when the water flows over Niagara Falls it is really going north.  There is a rock escarpment in the area causing a tough barrier heading east from Buffalo.  In Lockport this elevation problem was conquered with a double flight of five locks, and to the west the canal had to be cut through rock.

At first here are some images of the museum, followed by views of the locks themselves, and then a gallery of some information found around the locks.  Do open up the slide show and read if you wish – it is fascinating, and hopefully you will want to learn more.

Painting of the opening of the locks at Lockport.

Shows the elevation change from west to east. 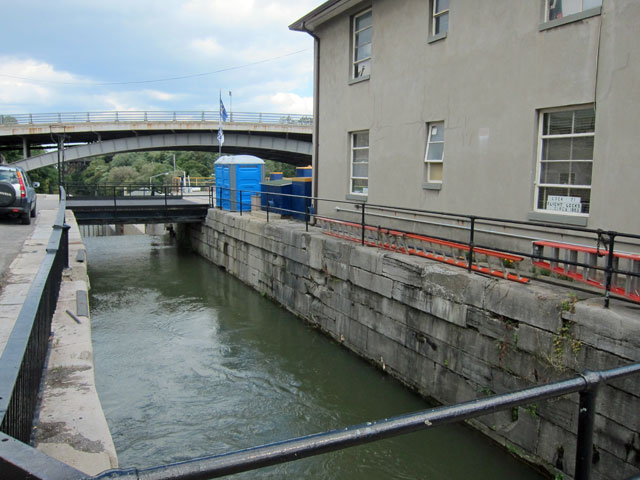 “New” lock. When the barge canal was built in 1918, two larger locks replace the second flight of five.

And, here are a few of the history panels around the lock area, if you would like to learn a little bit:

I arrived back in East Aurora with time to get ready for an evening reception and dinner at the Roycroft built residence of our guide and hostess Ellen.  A fantastic evening which included a tour of her husband’s studio where he explained to us how he designs toys.

Thursday’s agenda was focused on Buffalo and a tour of Frank Lloyd Wright houses.  Having gotten an overview of Buffalo architecture and its history I NEED TO COME BACK and learn and experience more!

Following our downtown tour, our first stop was at the Darwin Martin Complex for a two hour tour of the home FLW built for Martin.

Impressive, and I learned so much about Wright and his techniques in manipulating the eye and his purposes in blending with the landscape.

There was some time for the gift shop.  I am searching for some great hammered copper A&C candlesticks for my fine collection, but in the shop I saw a very reasonable pair of glass candlesticks in a simple Mission Style.  Being the “hopeless romantic” that I am, I now own them to include in my displays of flickering enjoyment.

Not on the schedule, but Ray had nicely asked, “could we stop at the small monument at the site of the Temple of Music (check out this link) at the 1901 Pan-American Exposition where President McKinley was shot?”  He died later of gangrene, and Teddy Roosevelt was sworn in shortly in Buffalo.  Unlike other world’s fair sites which have become parks in other cities, the Pan-American site was turned into a residential area (partially because of the black mark caused by the assassination).  A nice area (as were all the areas we saw in Buffalo – all well planned out with many parks, etc. designed by Frederick Law Olmstead).  Ellen directed our bus driver to the street, and I asked, “just 37 seconds please, that is all I need to get a picture.”

One of my bus mates said I made it back in 33 seconds.  Have to work on the list of all world’s fair sites I have been to throughout the world.

We then toured the Elmwood Village area, Millionaire’s Row, the Wilcox Mansion were TR was sworn in, and ended up at Canalside – the original terminus of the Erie Canal.

Original Terminus of the Erie Canal in Buffalo

It adjoins the Naval and Military Park, and there I saw tied up a submarine, the USS LITTLE ROCK (DDG-4) and the USS SULLIVANS DD-537. 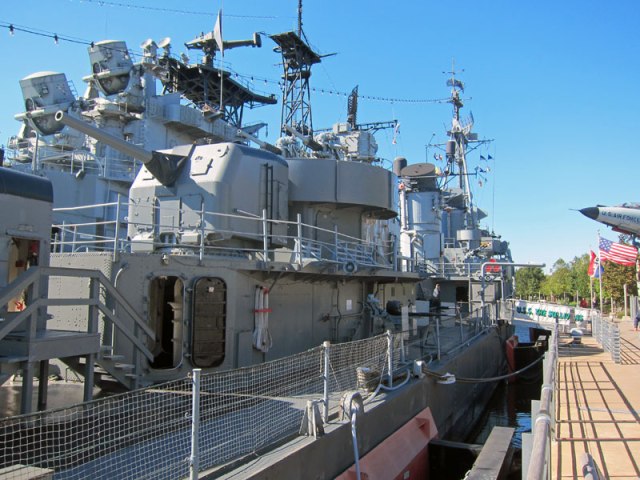 USS SULLIVANS DD-537 with USS LITTLE ROCK to the rear.

To better my chance for an officer program in college I had enlisted in the US Naval Reserves in high school (it worked for the officer program), but had a two week summer cruise obligation.  After graduation, and before college, I was assigned to the USS SULLIVANS for two weeks (50 years, and 4 months ago).  The ship was heading to Prince Edward Island, Canada, to be the US ship in port for the 100th anniversary celebration of the Confederation of Canada.  There was a gala parade that I watched with another fellow (in enlisted uniform) and I got into conversation with a couple of performers from the Wayne and Schuster show that was to be held that evening.  Since I was heading to Northwestern initially majoring in radio, TV and film, they asked if I wanted to see the show.  Well, we went as invited guests, and then tagged along to the private party for Prime Minister Lester Pearson. There I met Wayne and Schuster and the Prime Minister (still a teenager remember).  We were the only US presence it seemed, and everyone was coming up to Bob Eck (I remember few names from the past) and I pushing drinks into our hands and thanking us for being good allies.  All of a sudden the Commanding Officer of the SULLIVANS saw us and came up exclaiming, “what are you doing here?”  My actor friend jumped in and said, “I invited them, and we are having an all night party, can they come there too?”  Well, it was “Cinderella Liberty” and you were supposed to be back on the ship by 10PM or BIG TROUBLE.  But shocked at being asked, the CO said, “yes.”  It was a fun night, but after a few hours sleep Bob and I headed back to the ship for muster at 8AM.  Walking down the pier everyone was 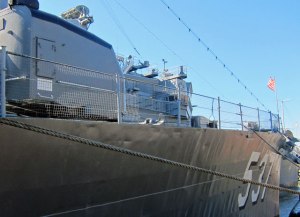 staring at us, and once crossing the Quarterdeck the Officer of the Watch had us escorted to the Executive Officer’s stateroom.  “And where have you been?  You have been AWOL.”  “But the CO said we could stay out,” I replied.  “Likely story – stay here.”  A few moments later he returned saying, “the next time the Commanding Officer says you can stay out, call the ship and tell us.”

Next we headed west along Lake Erie to Graycliff Estate, the summer home of the Martins.  Still under renovation it is a further superb example of Frank Lloyd Wright’s genius.

Water flowing from the front entrance south, giving the impression it is flowing through the house from Lake Erie.

and the back “deck” 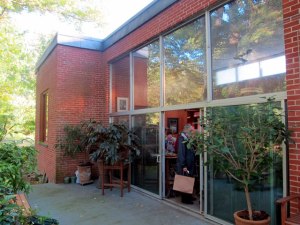 The Usonian was an idea for an affordable home for “common people.”  The plans for this home were bought in 1953, but the home not built until 1966. Another reception with wine and goodies while folks toured the small but functional home, and saw Janice’s pottery works and purchased her wonderful items.

This last full day was fantastic with dinner followed by another talk on the Darwin Martin house.  I must say that having had an introduction to Buffalo, RAY RECOMMENDS that Buffalo needs to be experienced for its architecture and history.  At the time of the Pan American Exposition it was the 8th largest city in the country and the wealthiest because of its important geographical spot for commerce in the US.  I cannot wait to get back there for further study.

It is now Friday night, 10:33 PM as I am finishing this up.  The program was over at 1 PM, and I ran hard from then until 9 PM.  I am finishing this and posting it while in a B&B in front of a fire, and wait until you travel with me on today’s journey – WOW.  And, then there is tomorrow’s trip home, who knows???

Writing by the fireplace – more B&B images on the next post.

I cannot understand why some people refuse to experience B&Bs.  Good they don’t, then I have them to myself. And, this Queen Anne (the Sassafras B&B in Lancaster, NY) which is on the National Historic Register I have totally to myself.

2 Responses to ONE OF THE BEST CONTINUES – 8 and 9 OCTOBER in EAST AURORA, LOCKPORT and BUFFALO, NEW YORK