These adventures started two weeks ago, and I have been home for twelve days. Why the delay in documenting and reporting? Why have I not gotten to my Red Lion Inn reports for 2018 and 2019, and what about my geology week at Historic Deerfield last summer, and great time in Pittsburgh in October? This time I needed the right title to start, and it just hit me – so, here goes, “Mount Washington Adventures.”

Cathy and I enjoyed the Mount Washington Hotel in Bretton Woods in June 1998 and September 1999 before it was converted for year round occupancy. But it has become pricey, and popular. But when you can get a room for $20 less than the $159 a night we paid in 1998, you say, “three nights please.” How? I was able to be included in a special “convention rate.” It was so nice to arrive, Wednesday the 10th, at the long drive to the hotel, even with overcast skies.

I enjoy a hotel or B&B’s “common areas” and only need a room to sleep comfortably, but there was nothing here to be sorry about. 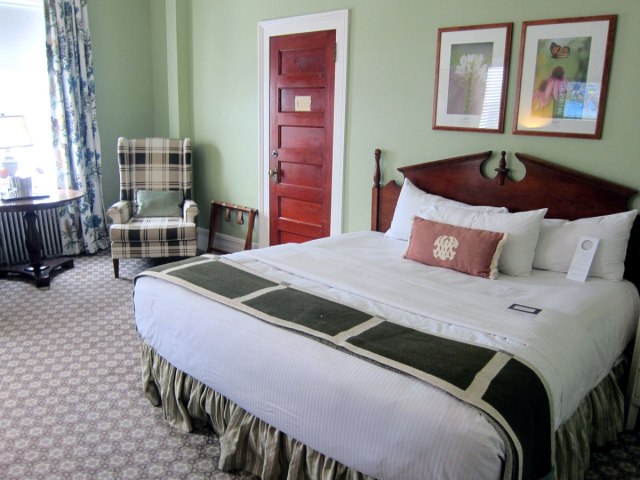 and, the view out my window to Mount Washington

After lunch I took in the historic tour of the hotel, enjoyed the Great Hall and the Conservatory, and read my materials and maps. I had no real plans for my three days, but then I plotted a route of new territory for Thursday discovery. I might add that I brought six books to read peacefully – only got to one, my history of the hotel.

Thursday the 11th I awoke to this sky above Mount Washington. 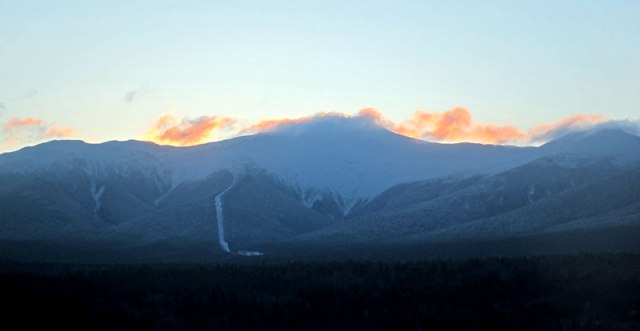 some moments later from the porch off the conservatory 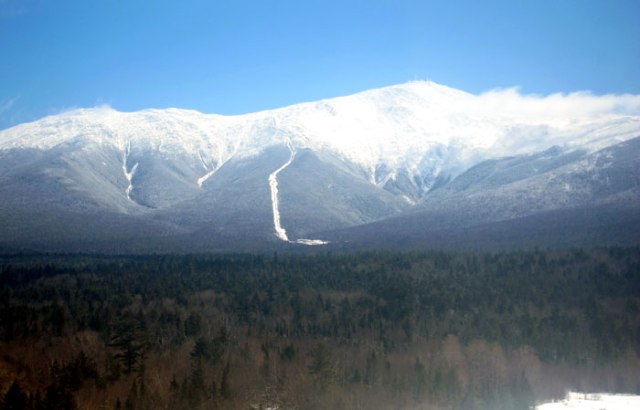 I had mis-understood friends and was waiting in the lobby to join them for breakfast, on their way out of breakfast they asked,”where were you?” “Here,” I replied. They said breakfast was amazing, so I went in. You can only endure this morning feast one out of three days. Note the way I want my toast served in the future to stay warm. Nothing like blueberry sausage patties with your omelet. 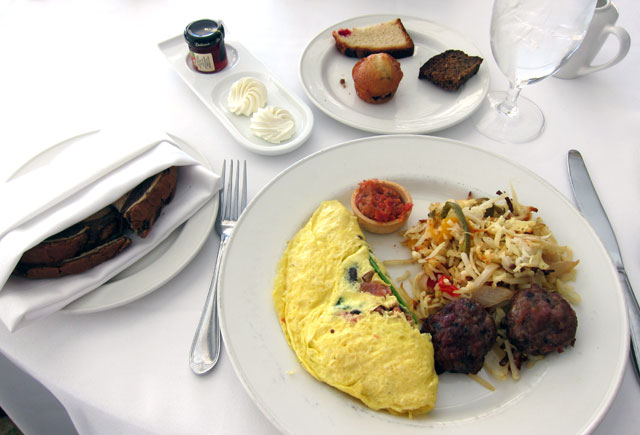 It was then back to read my history of the hotel before heading off exploring. Mentioned and recommended in this book is OPEN FOR THE SEASON by Karl P. Abbott. Written in 1950 it recounts almost 60 years in the hotel resort business. I immediately ordered a copy, and now cannot put it down. Yes, Ray Recommends – OPEN FOR THE SEASON.

Heading out to the car, I first wanted to chat with the post mistress of the hotel’s post office – the first resort with its own zip code, which it has had for awhile serving Bretton Woods. 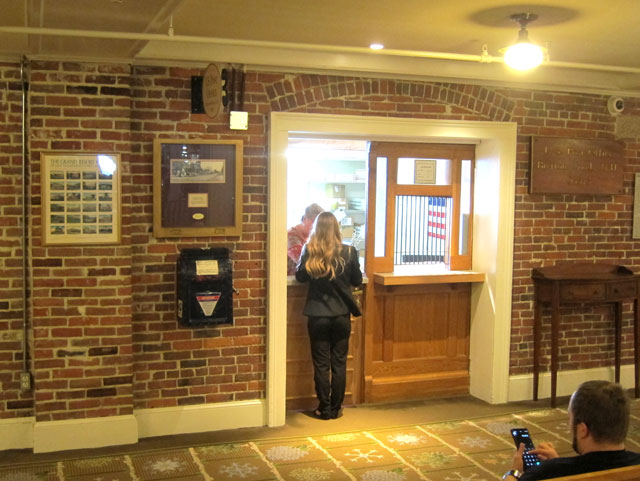 USPS pays Omni-Hotels $100 a year for the post office site, but the clerk (trained by the post office and following USPS regulations) is an employee of the hotel. A somewhat remote location (postally speaking) there are 32 PO Boxes for area residents, but the office also serves about 600 employees, a good share of them from foreign countries. This time of year (due to school seasons) it is mainly college age students from the Philippines, but in the summer months Eastern Europeans are the main hires. The postal clerk works for the hotel’s CFO and performs additional accounting and financial duties. You know I had to know.

It was then off to the route in black below. I realized I had never been to Berlin or Stark.

My planned circle is all to the north of Mount Washington. At Gotham I turned north to Berlin. On the 178 mile Androscoggin River, Berlin is a mill town that has seen one mill closing after another, and one of the most economically distressed places in New Hampshire. The downtown had its vacancies, but I have seen worse. Heading up the road, I was intrigued by what I saw in the middle of the river – small islands, one after another. 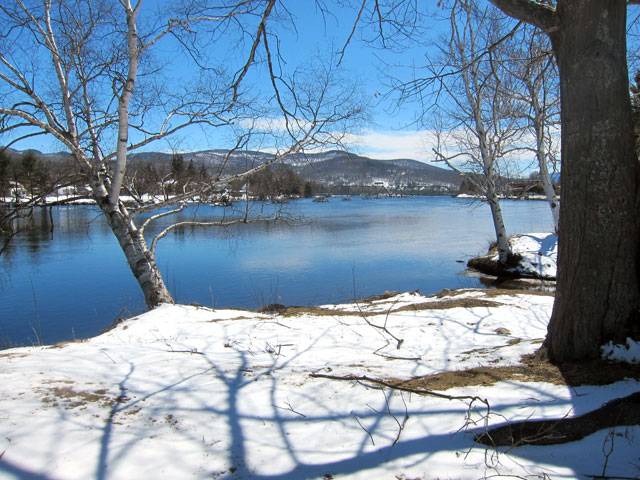 I liked this location for an image, but it does not show the small islands well, The State historical marker nearby explained these Boom Piers. Chains were attached from pier to pier to separate the river into two halves. During log drives, several firms had to share the river to get their logs to the mills in Berlin. Ownership was stamped into the ends of the logs, and way up river (the piers extended miles) loggers sorted the logs as they passed by, sending them on the correct side.

If you were driving down the road, and saw this, would you stop? I hope so.

Hopefully you are looking at what is a ski jump at the top of the hill – and it is. This is The Nansen Ski Jump – built in 1936, and the foremost and largest ski jump in the eastern US for almost 50 years. In 1938, the first Olympic trials were held here. Now another tidbit of information that will win you a cocktail during party conversation.

I was getting hungry – albeit 2PM, remember that big breakfast? Looking at my map I realized and hoped that if Milan had a place to eat, that would be it for miles. It did, I stopped, and it was the only place for miles. Here is the Milan Luncheonette and Variety Store. That is GiGi waiting outside. Normally, I learned, the parking lot is just snowmobiles or ATVs in summer. 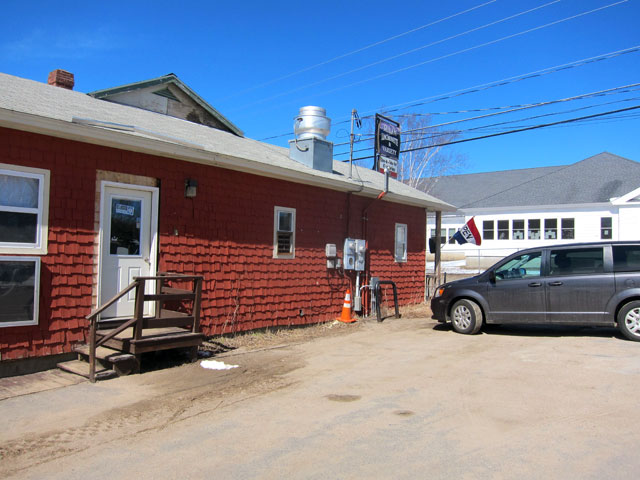 I continued up Route 16 following the river for awhile. Nice isolated and beautiful area. I turned around before reaching Errol, and cut over on 110A to get to Route 110 heading west to Stark. Stark had the only POW camp in New Hampshire during WWII. Having read STARK DECENCY: GERMAN PRISONERS OF WAR IN A NEW ENGLAND VILLAGE, by Allen V. Koop (another Ray Recommends to Read), ages ago, I had to visit Stark. I headed through this covered bridge to the village of just a few homes. I had thought the camp was in the village.

But I was wrong. On a back road a woman was walking her dog, and I asked, “I bet you get this question all the time, where is Camp Stark.” “Back on the main road,” she said, and told me I had missed the State historical marker. Back I went to Route 110 and turned back heading east. 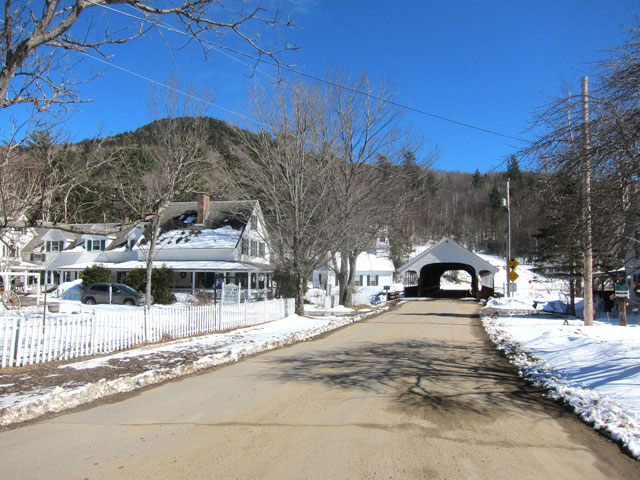 Clicking on this link you will get a nice quick history of the camp. Briefly, not all Germans were Nazis. Near the end of the war the German military machine took political prisoners (anti-Nazis) and other criminals out of prison and put them in a regiment that was eventually captured (actually these folks willingly surrendered). Sent to the POW camp at Fort Devins, Massachusetts, where violence amongst the Germans became a problem. The guards finally realized that the group they thought were the trouble makers were actually the ones being attacked since they were anti-Nazis. They had to be isolated elsewhere. In Stark, an abandoned CCC camp was readied with a fence and guard towers, and those prisoners (about 250) taken by train (through Berlin, NH) to the camp. They worked in the forests, cutting lumber for the war effort. Read the book, but first read the article linked above, and you will have more fast facts to win you cocktail conversation. 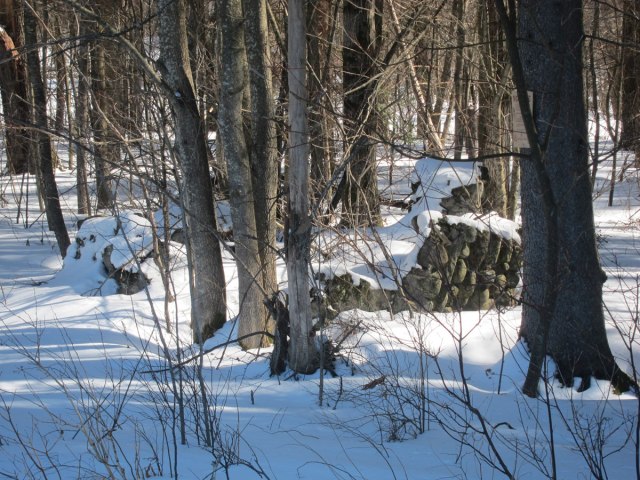 Remains of a guard tower at Camp Stark

Route 110 ends at US 3 in Groveton, and at the intersection is this interesting covered bridge that I did not remember. Hopefully you recall that you can click on an image in my “galleries” to see a larger image. 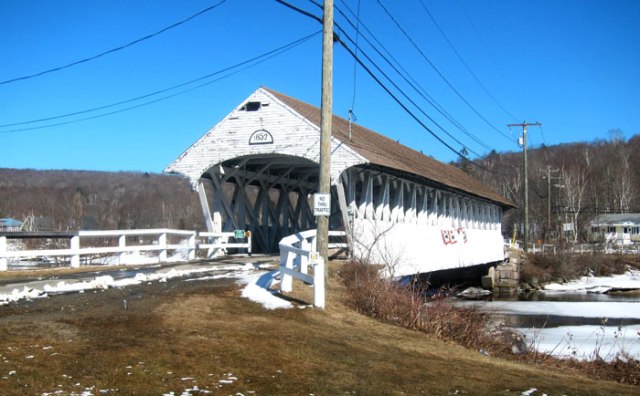 It was then back to Bretton Woods, but first visiting with the owner of the Potato Barn Antiques in Northumberland. Always learn a great deal from this fellow.

Plan for Friday was to head to Franconia, traversing a section US 3 that I had not been on before, and then loop up to Littleton. But first I visited again the the Loyalty Ambassador at the hotel. We had interesting visits each morning. Lots of coincidences, including the golf course she and her husband owned miles from my home in North Kingstown, RI, in the 1970s. But, I had to ask, and she told me where the print shop was – thus my first stop on the way to the car.

and some views through the windows

Presses run by belts off pulleys

Entrance to Littleton Coin Company – no photos allowed inside.

Arriving in Littleton, I headed to the Littleton Coin Company in the industrial park. World renowned, and probably the largest coin company, they have been in existence for almost 75 years. Originally stamps and coins, I remember as a child their ads and catalogs. Now owned by the sons of the founder, the coin and stamps are separate businesses. I went to the gift shop, visited, and learned there were almost 300 employees in the building, filling 25,000 to 30,000 orders a week – amazing. Then I headed back to the vibrant Main Street to say hi to Pollyanna. 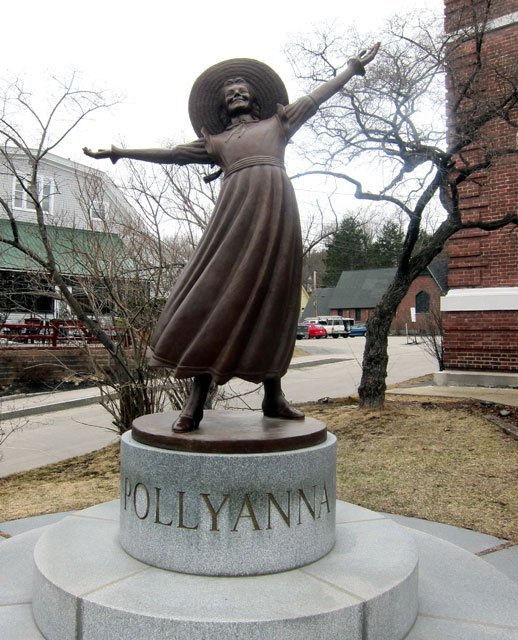 The Thayers Inn Hotel has stood on Main Street serving White Mountains visitors since 1850. Below the street view are two interior shots.

and, a view more views around town including Chutters, home of the World’s Longest Candy Counter. 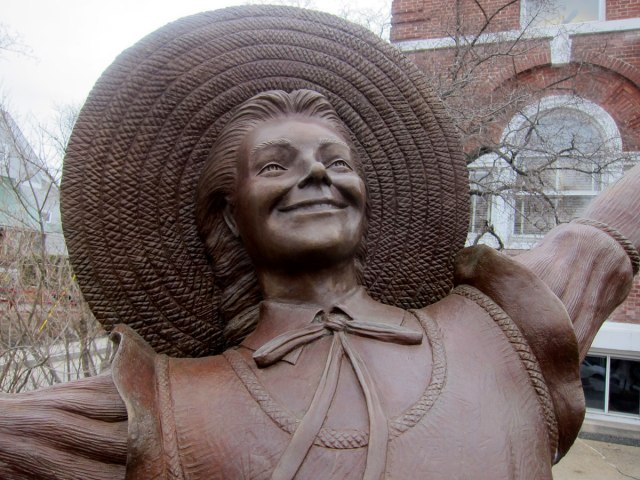 And, the World’s Longest Candy Counter

On the way back to the Mount Washington I stopped at the Rocks to at least say I have been there, but have to get back when it is open. It was then dinner time in the formal dining room – a wonderful treat.

Saturday explorations were “closer to home – the hotel that is.” I first headed to Crawford Notch. Sadly, the second Crawford House burned in 1977. The first was built in 1850, burning in 1859. The AMC Highland Center now occupies the location for hikers, and I took advantage of their cafeteria. 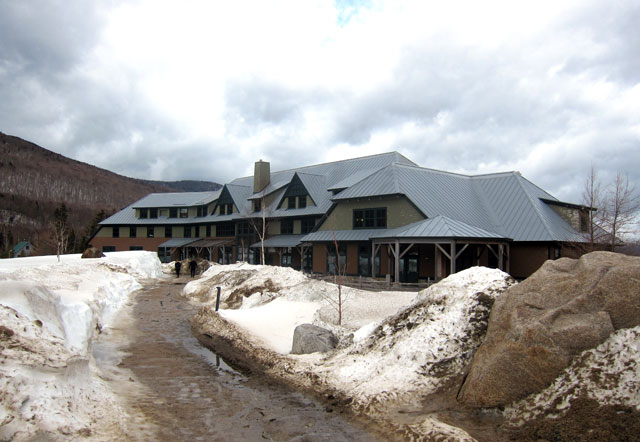 and looking to the Notch, here is the train station that I travelled to last year documented in June last year.

here is the rail bed cut through the rock in the Notch. Note the snow, slowly disappearing.

I then headed to visit the Cog Railway, now 150 years old. I rode the steam train in June 2013. The track is not open to the top this time of year, and only the bio-diesel engine is running. I got to the base station just as the noon train was climbing away for a half-way climb. 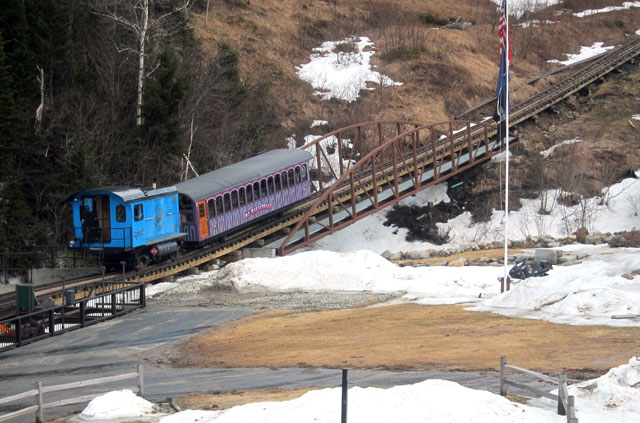 looking back the other direction you can just barely make out the red roofs of the Mount Washington Hotel in the center of the image below.

Here are some interesting history panels in the Cog Railway Museum 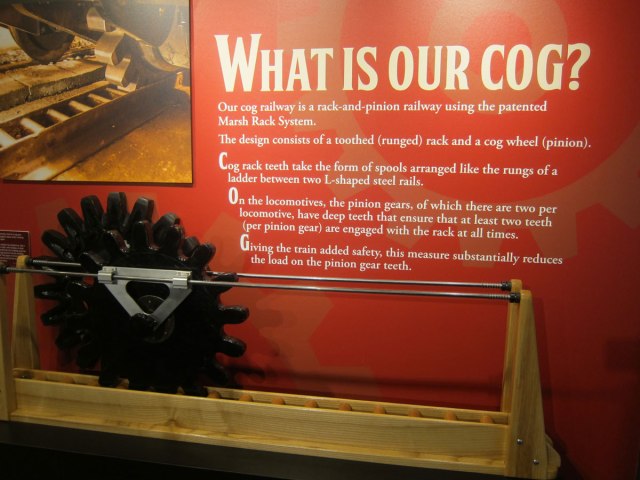 and, back at the hotel, looking towards Crawford Notch

and, if you have hopefully made it this far, you deserve some images of the Mount Washington Hotel. Plan your trip now after opening up this gallery. 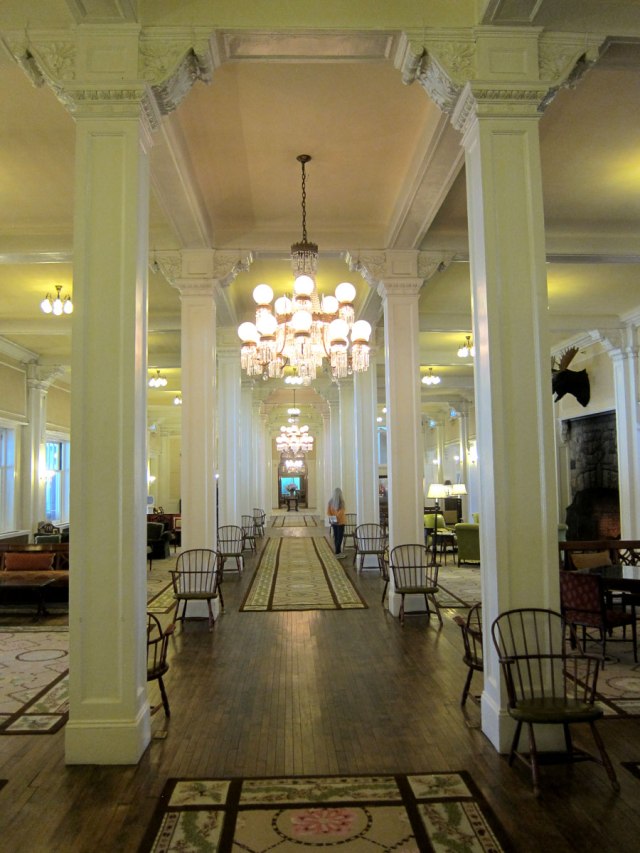 Fireplace in the Grand Hall

Room where the Monetary Conference Documents were signed. 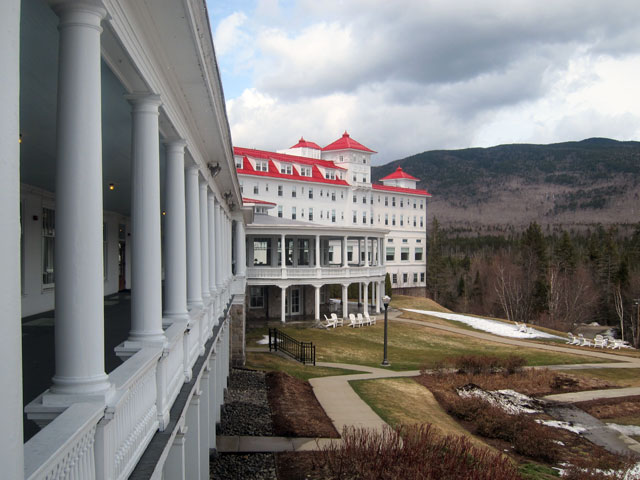 Backside of the hotel

What can I say? I am ready for another trip back, maybe with a pile of books to really sit back and read while watching everyone else walk by.