Wednesday, August 8, was my “full day” away. As I have discovered, and told you, it makes the most sense to remain in the same place for two nights – and then have a full day of exploration in-between the two nights of rest. My plan for the 8th was to journey to the Branford Trolley Museum, now The Shore Line Trolley Museum. In 7th grade, Peter Hottelet (son of journalist Richard C. Hottelet) got me hooked on trolleys. I joined the museum, and convinced my parents to take me there in about 1960. I was a member for years, and wanted to visit again. Also, I wanted to give them all my old newsletters saving them from being tossed by my heirs.

Googling a back road route I discovered that Abington Spares (formally in Walpole) had relocated to Deep River. You had better know that the Morris Brothers started building cars at their Morris Garage – MG Motors (and you better know that is BLUE BELLE’s ancestry). And the location – Abington, UK. I stopped and got catalogues for David C. and Dr. Dewey. The route I took to Branford – Connecticut Route 80 – give it a try. Hard to find, I arrived at the museum and a trolley was waiting for me. 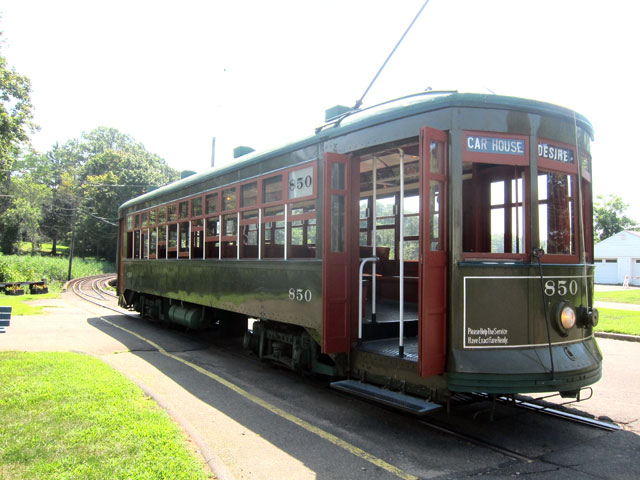 The track in the museum dates back to about 1900, and the line discontinued in 1947. The museum was established at that time to preserve history, collect cars, and use 1.5 miles of the original right of way. The collection now includes about 100 cars, but recent hurricanes brought flood waters in from Long Island Sound necessitating repairs and new buildings on higher ground.

You pay your fare ($3.50 with my senior military discount) and get aboard.

Peter was a great docent touring our small group along the line and in the yards.

it was nice to see young families joining in.

and, the controls (at either end to reverse direction) in case you are not familiar with this mode of transportation.

You first go to the end of the line, and then return to the yards for a guided tour. A second trolley arrives with another group. You can stay in the yard to tour on your own, and I did, returning on the second trolley.

Here is a gallery of some of the trolleys. You can click on any image for a larger view: 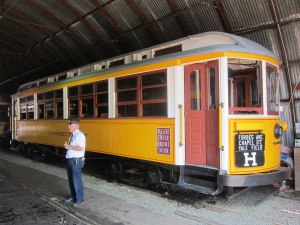 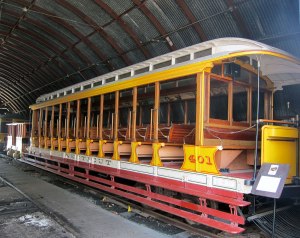 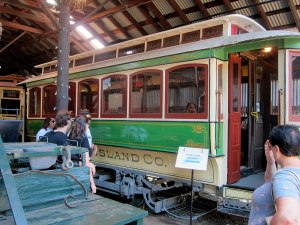 Note the curved sides. A hang over from earlier models needing protection from mud.

The electric motor actually inside and not on the wheels for propulsion. This car simply towed others. 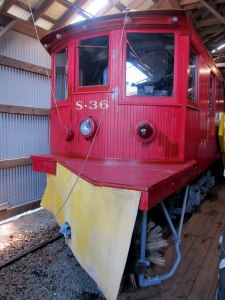 Plow and brush to clear tracks.

In one of the sheds is this car that was in the second tower of the World Trade Center on 9-11. Sitting empty in the station, this is one of the two cars that were not totally destroyed. A few years ago it was donated to the museum 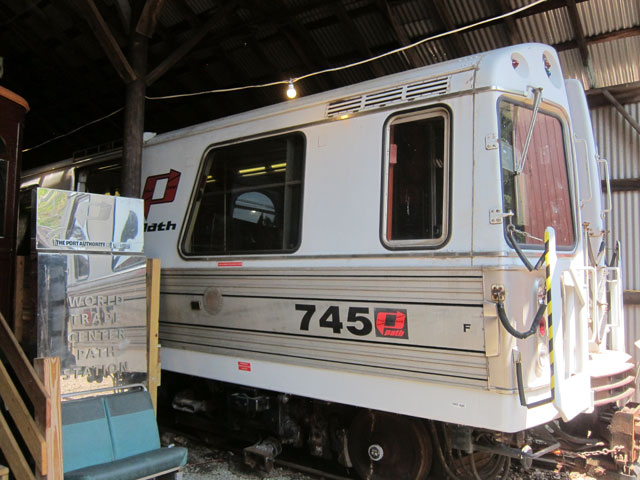 the interior of the car (below) is unique. This car was used to take revelers to the Savin Rock Amusement Park in New Haven (yes I have old postcards of the park in my postcard collection). But after a night of heavy beer drinking, the happy guests often “lost their lunch.” The floor of the car is concrete facilitating hosing down, and the seats sat opposite each other for more open space. The museum uses the car for party trips setting tables up in the middle.

Finishing up at the museum, the plan was then to follow the shore on secluded route 146 back to US Route 1 to Old Saybrook, and then back to The Riverwind.

Lots of nice vistas, many close islands, but “not my thing.” Glad I drove along and explored, but I don’t think you need to do it. Here are the Thimble Islands. 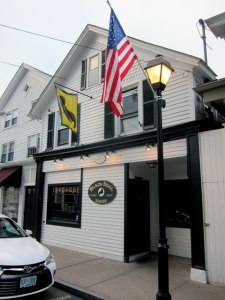 So many places to eat in the Deep River, Chester, Essex, and Ivoryton areas. I choose the BLACK SEAL in Essex. I can’t be right all the time. I do not recommend them. Poor service, and my salmon came with a flock of fruit flies that I could not completely kill off. I did not say anything to them — just to you here.

And, now Thursday, the 9th.  Sadly I did not get a colorful image of my breakfast at The Riverwind yesterday. AMAZING – Mike serves everyone the same meal, opening the dining areas at 8:30. His cooking and presentations are amazing. Although not as colorful as Wednesday’s breakfast, today’s “French Toast” was unbelievable. 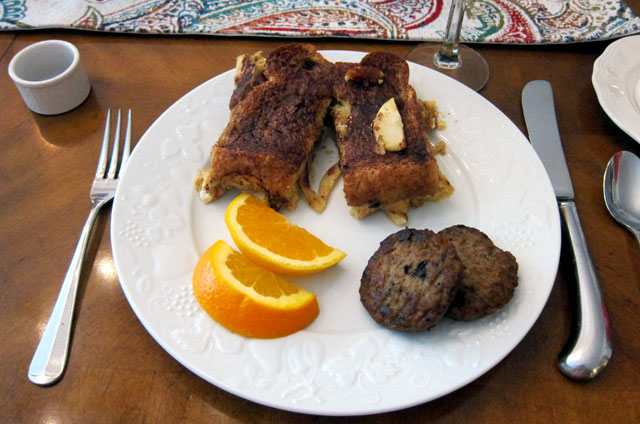 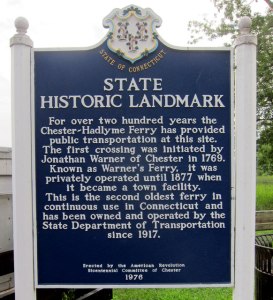 I wanted to visit the Pequot Museum –  Mashantucket Peqout Museum & Research Center – but was unsure of what else to do, and what route to take home. Ends up, no problem, after over 4 1/2 hours at the museum, leaving at about 4:15 PM, I just selected the quickest route home. To get there, I back-roaded (surprised?) heading up to Chester on Route 154 to catch the Chester-Hadlyme ferry. I  first crossed here in 1963. A Shunpiker “in training,” I was picking up my brother at Camp Hazen in Chester, but went further east so I could circle around and cross the river on the ferry in my mother’s 1960 Chevy Impala Convertible (of course I had the top down). I attended Camp Hazen in 1958 and 1959, Coming from the east I had to wait for the ferry in the small village setting — You Must Experience this Spot. You can click on the image above for easier reading, but this is the second oldest ferry in continuous use in Connecticut – gee, I was on the oldest two days ago. Not a populous area.

GiGi on her second ferry ride.

and, arriving on the east side of the river to pick up Route 82 to head to Norwich/Preston and the Pequot Museum 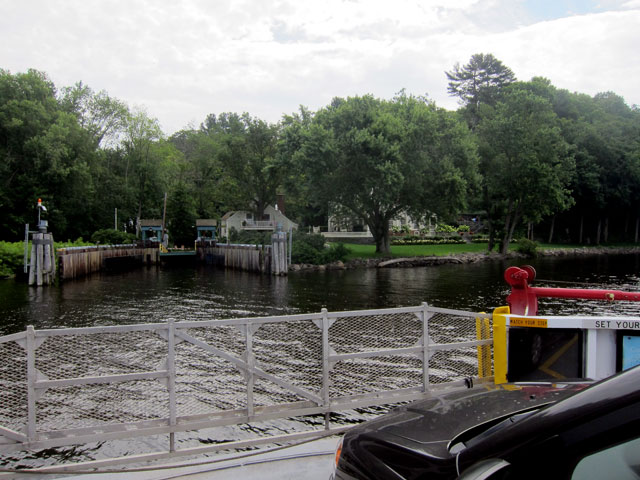 SHUNPIKING ALERT — Travel Connecticut Route 82 from the river to the end of Route 11 – bucolic, and like being home in New Hampshire.

I stopped at the Connecticut casinos in February, 2017. I wanted to experience them, and do not have to return. The museum was closed that day. RAY RECOMMENDS – VISIT Mashantucket Peqout Museum & Research Center, and plan on spending the better part of a day – you will not be disappointed. Since living in New Hampshire I have been able to get a better comprehension on the American Revolution in this area (not much has changed), and recently been getting a better understanding of the French and Indian Wars. And, now learning about the geology and formation of the Connecticut Valley, I was exposed to the Pequot War in 1636-1638, and needed to learn more.

The museum is wonderful, and met my information needs on the Pequot War and so much more. Hopefully it does the same for others. Three nice criticisms, that cannot be changed, but be forewarned. Parking is not convenient, but a small hike. Although the museum is logically laid out, it is not easy to backtrack since elevators and stairs do not connect the correct spots and are poorly marked. And, at least I could get some sustenance to survive, just expensive, small, and nothing exceptional. But still, please go.

So, since you promise to get there, I have decided to share some panels of information that really helped me learn some things (you can click to enlarge for easier reading, or just ignore – I will never know). The museum is logically starting with the ice ages, and then arrival of the first peoples in New England. You learn about the different tribes, arrival of Europeans and the trade cycle, and then the events leading to the Pequot War (see the movie – THE WITNESS at the museum). 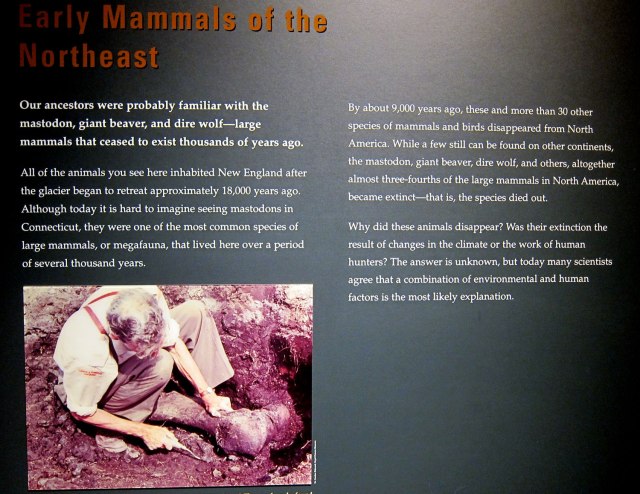 And, we all need to know the following about corn:

There is a recreation of a Pequot Village that I should have spent more time in. 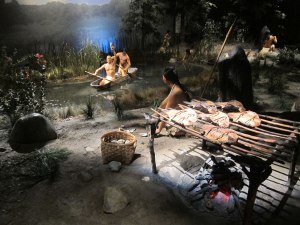 I was starting to think about Wampum, and “bingo” – there was a small theater with a video, and these panels. I learned, and had to share here: 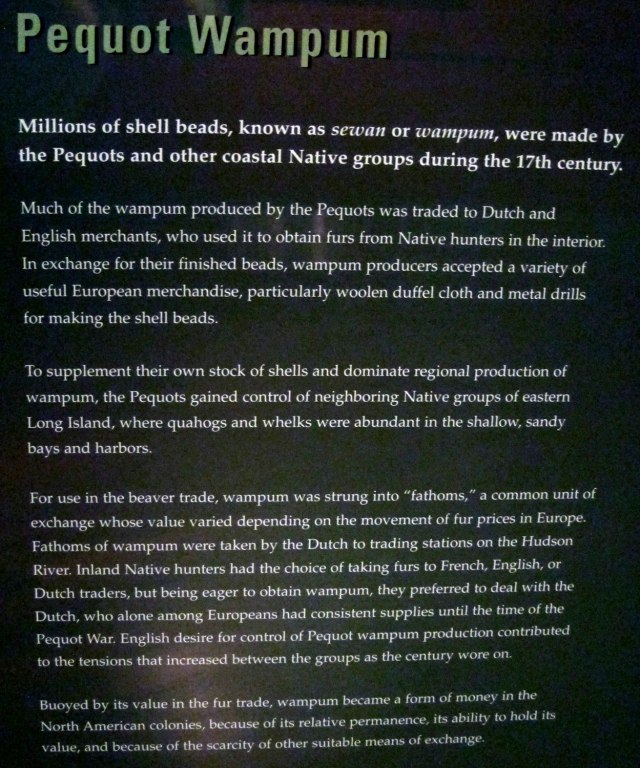 But most disheartening, and leading to the establishment of the museum after almost 350 years of mistreatment, is what followed the Pequot War. Those Native Americans were essentially to be forgotten, and written out of history. 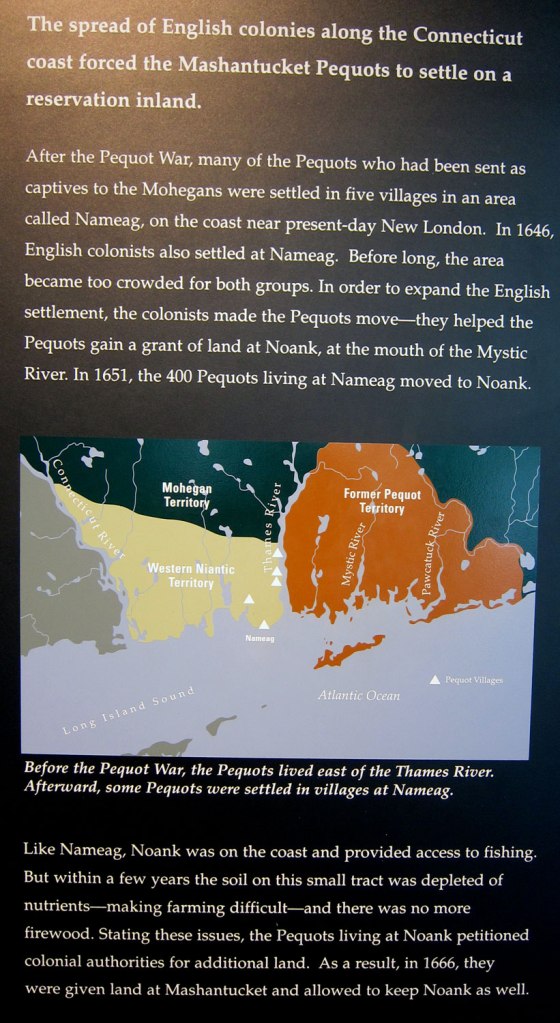 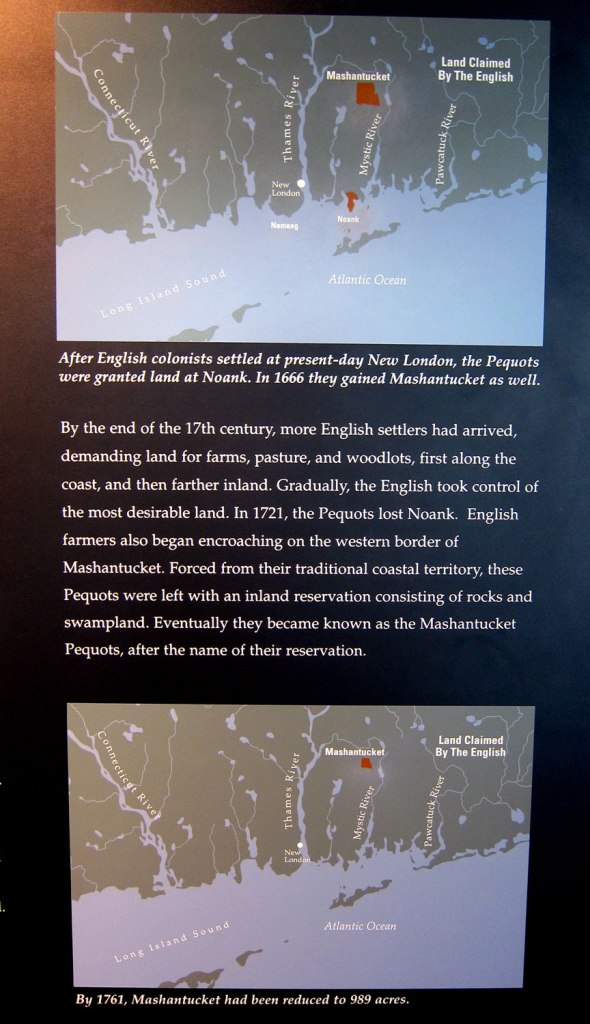 I am a native of Connecticut, but am now embarrassed as to what my home state did. I decided not to overwhelm you with the panels I took pictures of, but here is an extremely brief synopsis. Mistreatment persisted, and in 1855 the State sold off most of the Reservation Lands. Just a handful of hold-outs remained into the 20th century, and were wards of the State Welfare system. In the 1970s Pequot youth began returning to the barely 200 acres to keep their heritage from disappearing. They wanted their lands back, and it was discovered that George Washington in signing a document setting aside lands for Native Americans prohibited sales of those lands by states (hope I have it right – the concept is correct – I am good with concepts more so than details). In the courts, working its way to the Federal Government, and Reagan finally signed the paperwork declaring George Washington’s proclamation also applied to Eastern Tribes, and Connecticut was wrong. With the Tribe winning and getting reimbursement, they first invested in a pizza franchise, and carefully reinvested funds, saving their heritage, and presenting their story in the Museum.

I said it before – RAY RECOMMENDS – Visit the Pequot Museum adjoining FOXWOODS.

I then hopped on Connecticut Route 2, joining up with I-84 for a short hop to I-91 North, and home.

It was a great, and unexpected wonderful day. But, another big adventure coming up – “stay tuned” – thank you for getting this far, yours, RAY

Addition – August 12 – so I can remember these other places to visit, I told my friend who sent me his memories that I would post here to help in planning my next trip, and for you to plan to do also. I think I now know why cars are so precious to us — they carry us to memories, and we make nice associations.

“I really enjoyed this particular segment. It hit on so many memories of the state I once lived in. The roads, the places, it’s all good. I knew a tour guide at the Thimble Islands. Chester, Deep River and south were the stomping grounds of my youth. I can’t tell you how many times I’ve crossed the Ct. River on the Chester/Hadlyme ferry, partly or largely because I lived nearby. I still have some very good friends that live just beyond the dock on the Hadlyme side in Selden Cove. Joshuatown Road is a interesting back road between Hadlyme and Hamburg. Lots of beautiful and well kept homes on that road. It was one of my favorite shortcuts to Rt82. The Hamburg Fair was an annual event my parents always took us to. …  When I was much younger my parents took me to Cowboy Valley just North of Clinton. What a great kids place that was.”