I needed another rejuvenating break, but where to go? I focused in on eastern Connecticut, and booked a fabulous B&B. Then I started researching the various museums and sites I wanted to visit. All reopen by Memorial Day – “my bad.”  But, no problem, just refigure, head off anyway, and something will work out when you keep a positive attitude.

Having just written about the 19th century Mulberry Craze and Silkworms, I wanted to see where it started in Manchester, Connecticut, and the old factories that eventually employed over 4,000 people. That was the goal for Monday on the way to the B&B. Disappointed, you  need not visit Manchester. Now what to do? On the plan was to start on Wednesday at the Submarine Force Museum & USS Nautilus in Groton (closed Tuesday), but I could make it there now, and have almost 3 hours to browse. 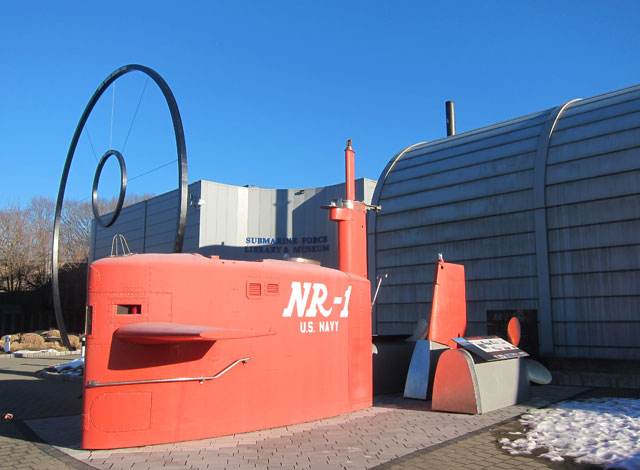 I am glad I am so flexible – and highly recommend you visit the museum (free).

Looking from the entrance to Sub Base New London – flag on hill. Open hatch in foreground is the top of a Polaris Missile Tube.

My first ship while on active duty was the submarine tender – USS BUSHNELL AS-15 – and tied up alongside were WWII subs. Next I was Supply Officer of the FBM Submarine Training Center — thus I had somewhat of an idea of what I may see, and I was not disappointed. Moored outside on the Thames River is the USS Nautilus, the world’s first Nuclear Submarine launched in 1954.

Here is a gallery on board the sub (remember you can click on an image to open up to larger sizes). Only the spaces forward of the sail (conning tower) are open. The reactor and spaces to the rear are closed to the public. The material condition of the ship is amazing, and many bulkheads have been cut-away for better views.

Looking south before going below. That is the I-95 bridge in the distance.

Officer’s Mess – dining room, and only available space to relax and work.

Back in the museum, a cutaway model of a WWII sub.

And, a cutaway model of a Nuc.

In typical Ray fashion, my timing was almost perfect, and I arrived in the Mystic countryside at the Stonecroft Country Inn (built in 1807) shortly before 5PM.

“I shall return.” The Inn is wonderful. Besides the house, there is an original renovated barn with luxury rooms and the dining room. A few couples were in the barn, I had the house to myself (as usual in my journeys) with four common rooms besides my bedroom on the second floor (front corner on the right in picture above). 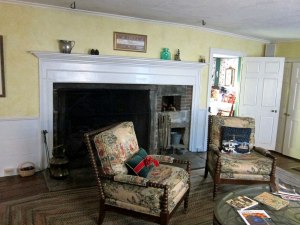 Keeping room across the rear – I sat here and “worked” both nights.

Stairs outside my room — really looks mid-18th century and not 1807.

And, looking back from the bed to my fireplace.

And, breakfast my first morning.

Monday night I went to dinner at the Captain Daniel Packer Inne built in 1756 in Mystic.

Looking out my window to the harbor.

Monday night, besides working on articles for THE WALPOLE CLARION I had to figure out a plan for Tuesday. I thought about heading east to Watch Hill, RI, not having been there in decades, but then it struck me – “fill in the map Ray, you have not been along the shoreline from Mystic to the Connecticut River. Off I went — on the map below I have marked the B&B on the right, follow the route south, and clockwise back. You can see a small backtrack for Route 169 home on Wednesday. 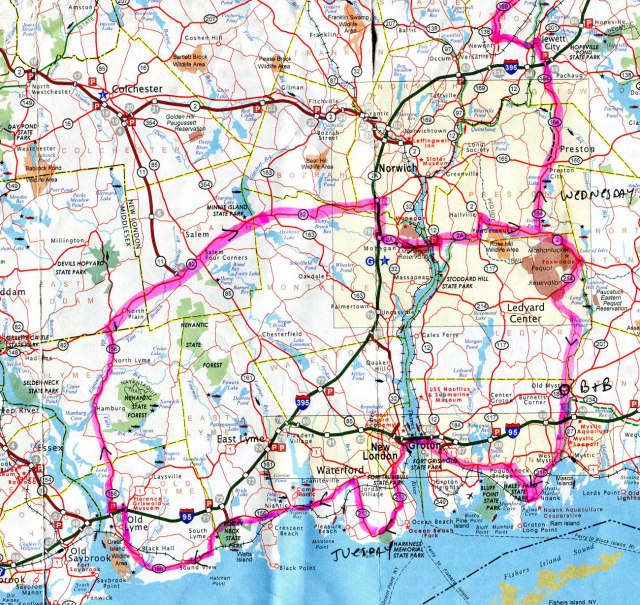 Out of Mystic I took Route 215 toward Noank arriving “downtown” there.

Noank is right on the shoreline 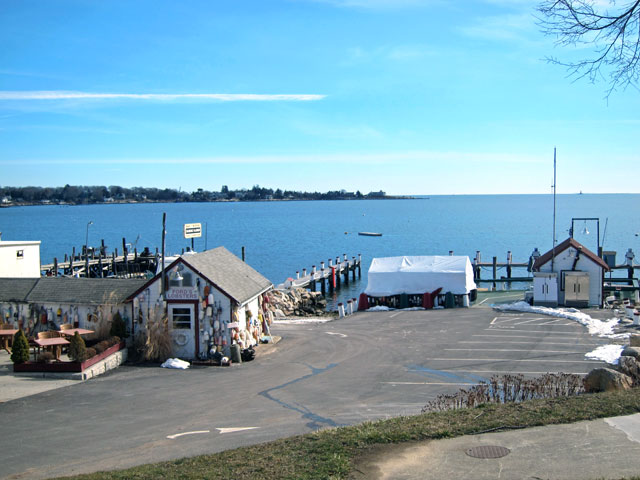 And, this is the perfect old general store on the water – now the historical society – CLOSED.

Amelia Earhart married publisher George P. Putnam in Noank February 7, 1931. Here is a haunted looking Victorian on a windswept bluff on the bank.

And, even with this wrap on, this little gal looked cold.

I then continued west towards Fort Griswold State Park in Groton. Museum closed, but I walked the grounds of this Revolutionary Fort.

In September 1781, British troops under Benedict Arnold raided and burned New London in the Battle of Groton Heights. Fort Griswold was the objective on the Thames River, as was Fort Trumbull just across the river. 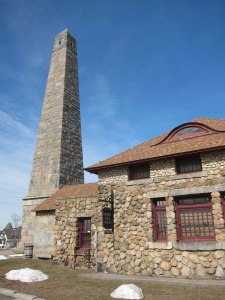 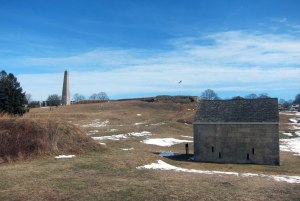 Looking from Fort Griswold across the Thames to Fort Trumbull.

Shot was heated here to burn a wooden ship when hit.

The wounded during the battle were taken to this adjoining home for treatment. Someday I will accomplish a Colonial garden such as this outside my porch.

I then crossed the Thames River, drove through New London to Fort Trumbull. Yes, also closed, but worth a trip back.

And looking back east across the Thames to Fort Griswold (you can see the monument on the hill to the left). The yard on the river is Electric Boat were subs are built.

Picking up Route 156 I eventually arrived in Old Lyme. No images for you, BUT DO NOT MISS OLD LYME. Wonderful Colonial architecture and setting, and an easy hop-off from I-95. I then continued north on 156 to Route 82. I highly recommend that you journey up Route 156 from I-95, no matter what time of year. If I had turned left, I would have rolled into Gillette Castle State Park and Gillette Castle, which I shared with you last August.

But the plan this time was to head east to Mohegan Sun, and then to Foxwoods. I thought that I had to at least say I had seen the Connecticut casinos. “I have been to the Casinos in Connecticut – DON’T BOTHER!!!” Well if you are like me, don’t bother. I expected something glitzing and with a Wow factor. Nope, nothing to “write home about” here. Mohegan is not even worth a stop in my opinion – here is a layout 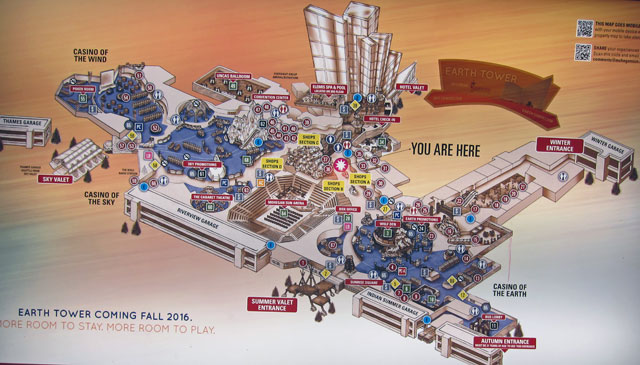 But FOXWOODS is a tad better with a wide range of a variety of decor almost approaching eye-candy (did I tell you I am not a gambler – except with buying books – and have no idea what the games and machines are about?). I stopped first to browse through the Tangier Outlet Mall built between several of the buildings. I am not a shopper, no glitz, and nothing to entice me in. I went into the AS SEEN ON TV store – it seemed catchy. Thought it would be fun – NOT – actually all they had was crap that would NEVER be SEEN ON TV.  I wanted out.

I got my daily 10,000 plus steps just trying to find my way out. I even got desperate, and considered this escape. 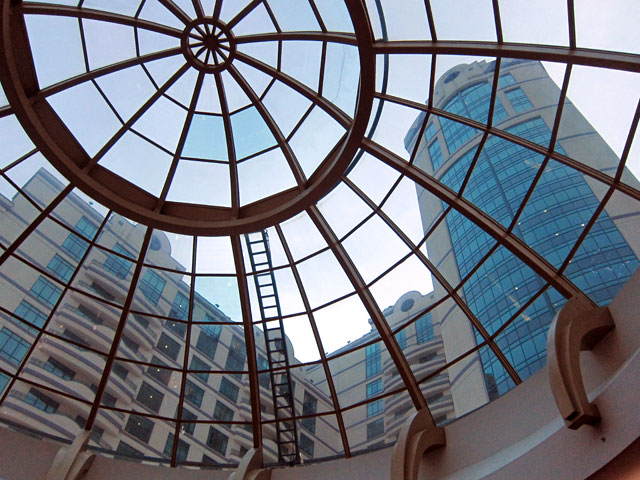 Tuesday night dinner again in Mystic. Back to work in the Keeping Room, and soon it was Wednesday.

I had found a list on-line of the Four Connecticut Scenic Drives to Explore. Yes, been there, except one – Connecticut State Route 169 which heads from Norwich to the Massachusetts border. That was Wednesday’s plan to head home.

So, I meandered past FOXWOODS (will get back for the Native American Museum, however) and picked up Route 169 in Jewett City. Again, all new territory, and fantastic Colonial architecture, and the most amazing stone walls I have ever seen. Probably helped with leaves off the trees, but still!

Here is the first home that really caught my eye – as I approached Canterbury. 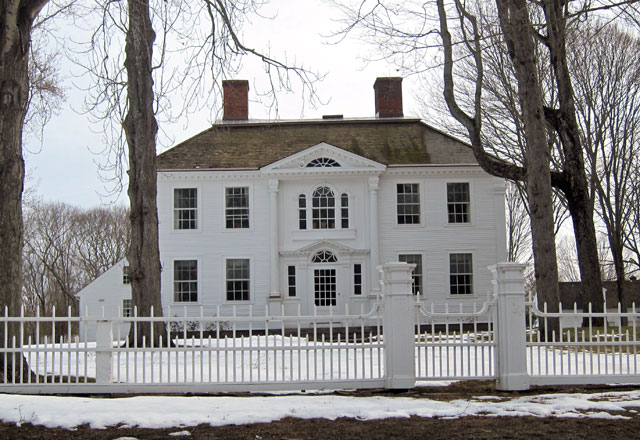 At the crossroads in Canterbury is the Prudence Crandall Museum (closed). Prudence had a school here in 1831 to educate daughters of wealthy local families. The school was extremely successful and in 1833 she admitted Black girls. The State responded by passing the “Black Law” which made it illegal for Miss Crandall to operate her school. Miss Crandall was arrested, spent a night in jail, and faced three court trials. The case was dismissed in July of 1834. Two months later a mob attacked the school, forcing Miss Crandall to close.

Just across the road was this old filling station. It was in front of such a store in Dillon, South Carolina that I bought my 1890 Bartholomew Sidewalk Peanut Machine in 1965. 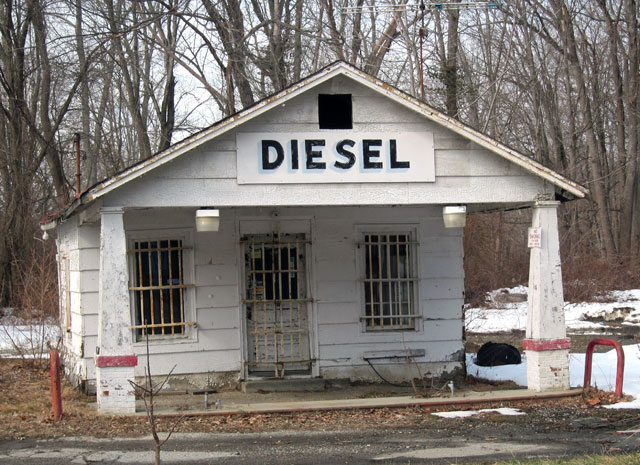 I detoured into Putnam to an antique center that Cathy and I would visit. I found one treasure I needed for Prof. RAB’s Wagon on Wonders — arriving in town for Old Home Days 2017.

And then passed through Woodstock, and Roseland Cottage (closed for the season). 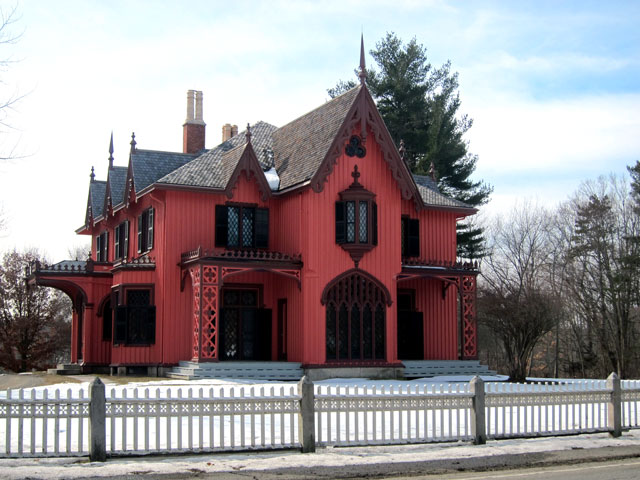 And, then home through Sturbridge and Brimfield still looking for one elusive item Prof. RAB needs.

I have been home and busy for six days. Getting harder and harder to write all I want to do. BLUE BELLE went to hospital for repair to some bearings, but Dr. Dewey has found that her entire propulsion plant must be rebuilt, so that is underway. She will be good enough to go cross-country, so I will scrap the CORVETTE idea, and also sort of decided that to be practical (since BB2 and BB1 will get all the attention this summer) that I should help LADY RAB find a new home — so that is the plan.

More adventures coming — I have a full plate until July 1, but who knows what I may be able to fit in. Bye for now, as always, yours, RAY