Number One son called a few moments ago asking what I had done today. “I traveled a road I had not been on before,” I replied. He said, “I can’t believe you have any left.” Yes, I do, and some routes I can always repeat to see what is new, or just to feel the wind. I have had trouble getting posts done. I have been waiting until I get home to work on a post, but with at least three days to document it becomes overwhelming. “Life gets in the way” and I do not get my stories done. I still owe you RLI from May (actually I owe myself to remind myself of things to repeat), and this week I had a three day adventure with many images. Think I will go back to my old ways and do my trips day by day. Easier to get done, and not as overwhelming for you — but remember, you don’t have to read them. And, if you fail the quizzes, I will not hold it against you – maybe.

Today’s trip I started 3 weeks ago, but feared BLUE BELLE was having an internal problem, so we headed back home only getting as far as Putney. She is now in hospital with Doctor Dewey, and BLACK BEAUTY just got out of hospital with a new wiring system – today her first outing since. You may recall she destroyed her last one in Pittsfield, Massachusetts, last August – a 99 mile piggy-back ride home. What did I want to see? Vernon, Vermont, Fort Dummer State Park, and Northfield Mount Hermon School. Vermont Route 124 out of Brattleboro south was to be the “new road.”

About a mile south of the Brattleboro railroad station is this monument, moved in 1908 about 2200 feet from the south when the site of the original Fort Dummer was flooded with the building of a dam on the Connecticut River. 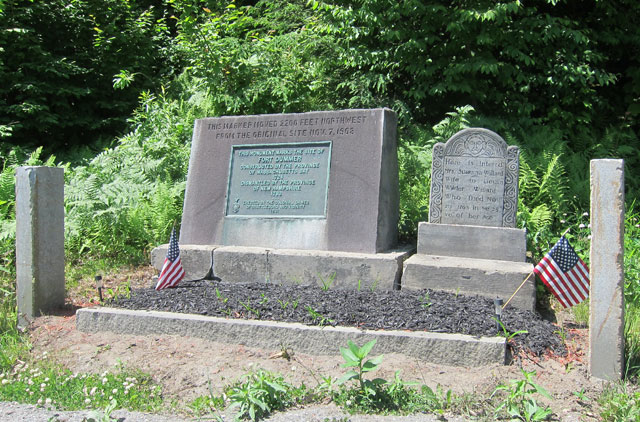 Fort Dummer was the first permanent European settlement in Vermont, built in 1724. Seventy Abenakis attacked the fort October 11, 1725, killing many soldiers. A palisade was then added. Abandoned in 1763, it served a role in the French and Indian Wars.

Heading south on Route 124 I wanted to see Vernon, site of the now closed Vermont Yankee Nuclear Power Plant. A friend asked, “what is there in Vernon to see?” “I will find out,” I replied.

I expected to see the large towers reaching up into the sky, but that was not the case. It is (was) a small facility. I did not see the large cooling towers because instead the waters of the Connecticut River provided the cooling source. 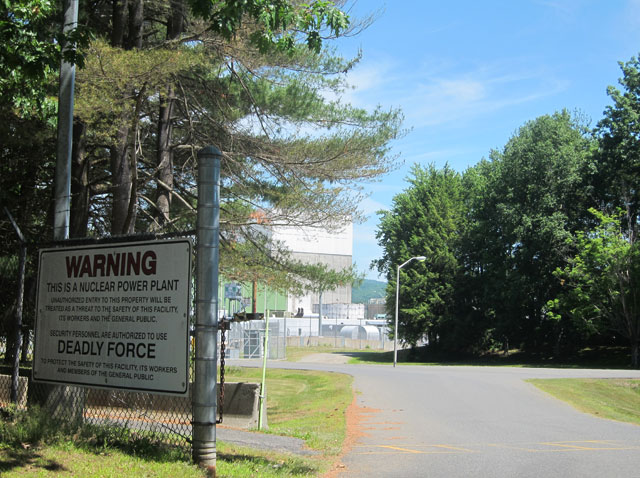 How many nucky plants have a Colonial office building? 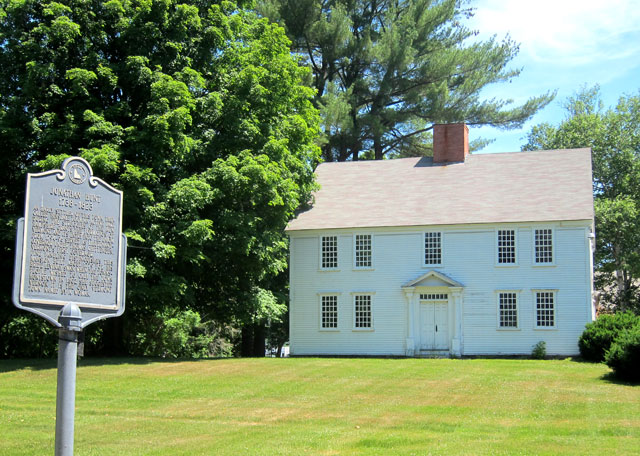 Here is detail from the sign that gives the history of this almost isolated area. 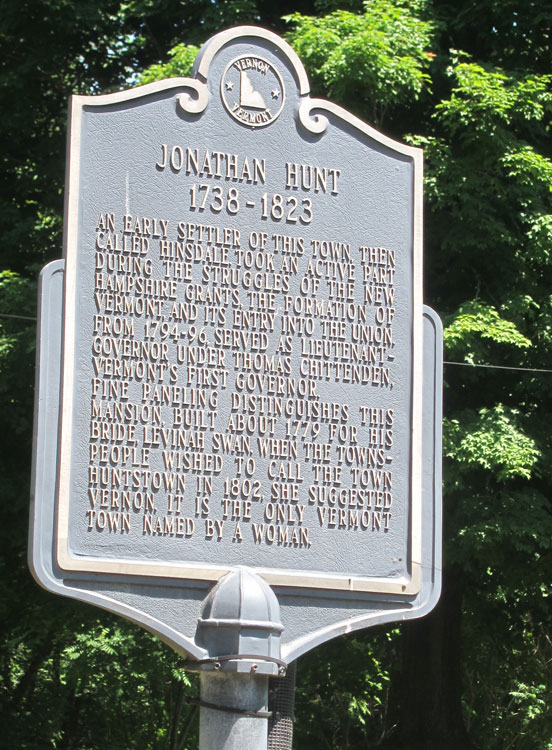 Next I wanted to see Fort Dummer State Park – you always see the sign for it heading north on I-91, but I had to see it. Heading further south I was looking for a sign, but soon pulled over, turned on my iPhone, checked WAZE only to find I had to turn around and go back north 5 miles. I dutifully turned left on a dirt road to eventually be told “you have arrived at Fort Dummer State Park.” Well, maybe – no entrance, just woods. I continued on the road to US Route 5, turned north to the Guilford Country Store. The clerk said, “continue north, turn right at the Walgreens (in Brattleboro), pass the school and turn right at the bottom of the hill. The road ends at the entrance.” And, there, well hidden was the entrance with I-91 in the background. 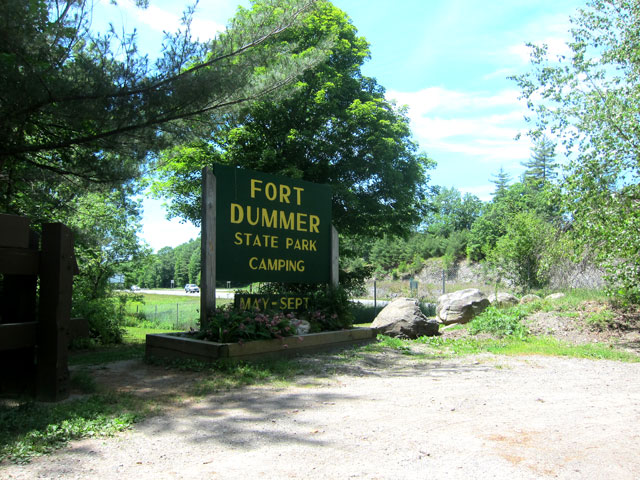 The ranger let me drive around for free. A really, really nice campground with hiking trails – that is about it, but now I (and hopefully you) know what is along I-91 as you head going north.

Backtracking back, can have its advantages. I went back down the bypass past the entrance for Vermont Yankee and came upon the Vernon Dam and power plant built in 1908. Bet you have never seen it – that out of the way. 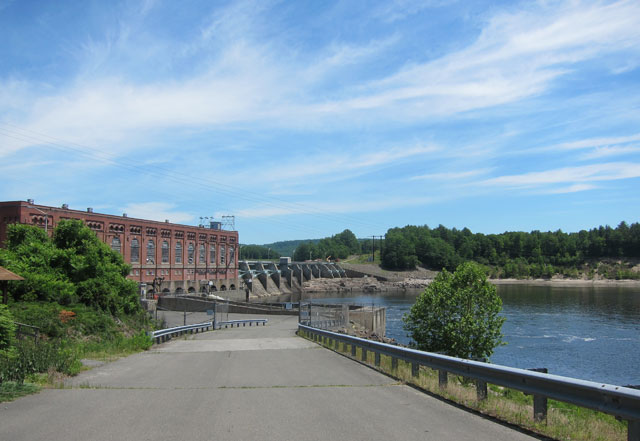 I now have another “favorite ride.” VT 124 following the Connecticut River from Brattleboro to Route 10 in Massachusetts. Great scenery, great straightaways, just like some of my favorite sections of US Route 5 north of me in Vermont. Arriving at Route 10, I turned left, and then right into the entrance of Northfield Mount Hermon School. Had to see it, and was overwhelmed with the size of the campus, the buildings, the beauty — far surpassing what many college campuses are. A prep school for grades 9-12, there are about 650 enrollees.

It was then north on Routes 63 and 10 into the Main Street of Northfield. A beautiful town to experience, I stopped at Highland BBQ in town – amazing. Simple atmosphere, but nice menu and food. I had a vegetarian BBQ sausage sandwich with smoked onions and pickled peppers with a three bean salad. Not eating much tonight. 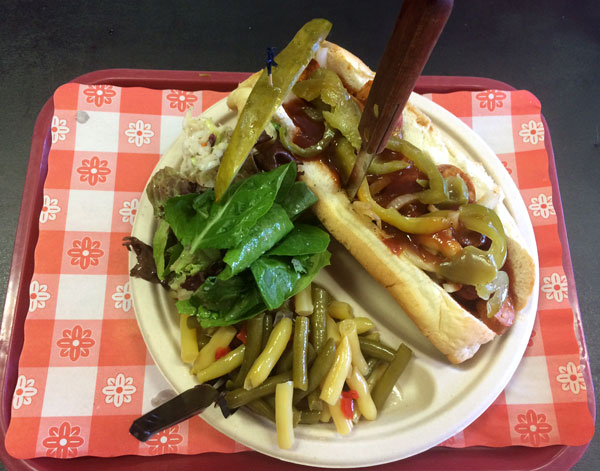 Arriving in Hinsdale, I continued west on Route 10 hoping to find the Winchester Historical Society in Ashuelot open. No luck – probably never open, but I had to check. At least got a great shot of the old railroad station next door. 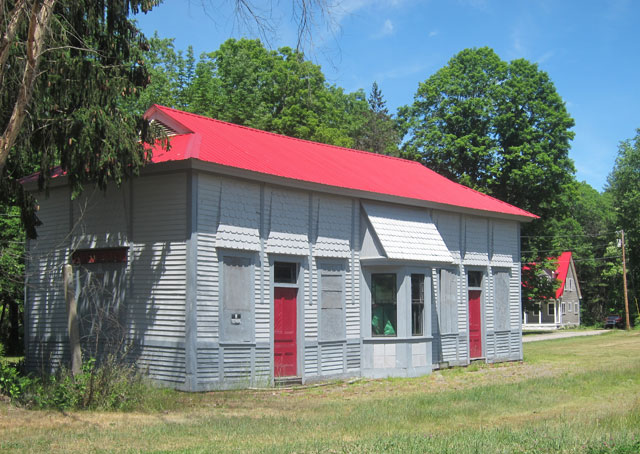 and, I have shared the Ashuelot Covered Bridge before, but here it is again. 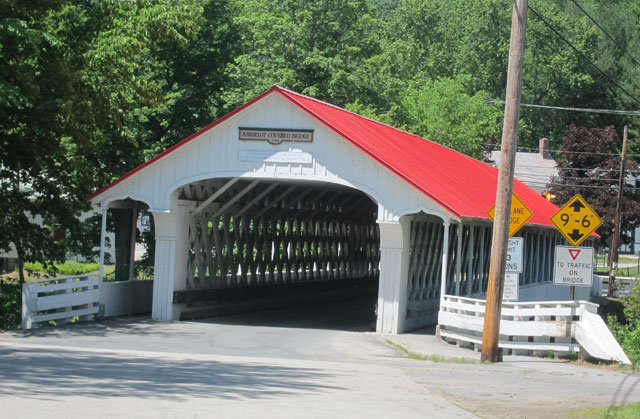 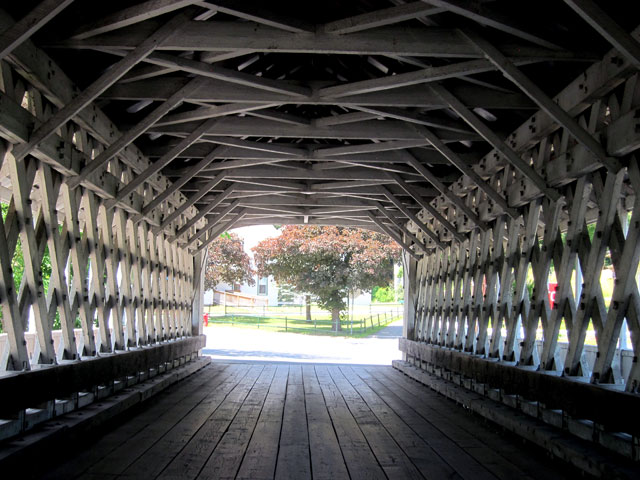 Arriving in Winchester, I turned north to Keene, and scooted on home. Five hour outing – new road, and a new route to enjoy — VT 124.

Now, I got this done within hours of getting home – yeah, Ray. I will break last week’s trip into three posts, and then get to the three days away at the Red Lion Inn. Lots to share that you may wish to experience also. Thank you, happy travels, yours, RAY