One sixth gone is the year – hard to believe, particularly since I have not yet experienced

winter. Blame me for the lack of snow and cold – I bought a new winter coat in November, and it is hanging still in the closet with new tags attached. Time goes fast, particularly working on The Walpole Clarion, and on Thursday I mailed what I consider our best looking issue, and with the  best content. I invite you to take a look by clicking here, and do subscribe to the on-line edition to keep up with our town events, and some of my writing.

Still no exotic trips in the works for 2016 as I am hesitating until I resolve a nerve issue which is impacting on my stamina and strength walking. Fixable I am told, and a second opinion coming on Friday. But, on the list for some time was my staying with Alex for awhile. You know that he and I are fortunate to have time and adventures together. This time David and Mari were both making presentations at a conference in Japan, and it only makes sense to tack on a holiday, particularly when someone else is paying the airfare. So here I have been the last week, getting him to school, making meals, etc. Usually when he is in school I can explore, do museums, etc. but this time of the year much of what I want to do is closed, so I brought cartons of work along. I have no idea where the time has gone as usual. But on Saturday, 27 February, we went out running.

“On my list” for ages has been to attend an Automotive Lawn Event at the Larz Anderson Auto Museum in Brookline, Massachusetts in the summer, and to see the museum housing the oldest car collection in America. We left at 11 AM, had lunch in Brookline, and entered the Anderson’s Carriage House, built in in 1888, and inspired by the Chateau de Chaumont-Sur-Loire in France – See more at the museum’s website, where I encourage you to learn about the Andersons.

Prominent, wealthy families in America since the outset, the museum is on the 65 acre grounds now forming the Larz Anderson Park. It was left to Brookline following  Isabel Anderson’s death in 1948. The family were benefactors in many ways over the years including building the Weld Boat House, and Anderson Bridge over the Charles River. Sadly the vacant mansion was torn down in 1955, and the gardens are not where they were, but what an asset to area residents — and automobile enthusiasts for the events held in good weather.

There are rotating exhibits in the main area as you enter, and this year motorcycles are featured. 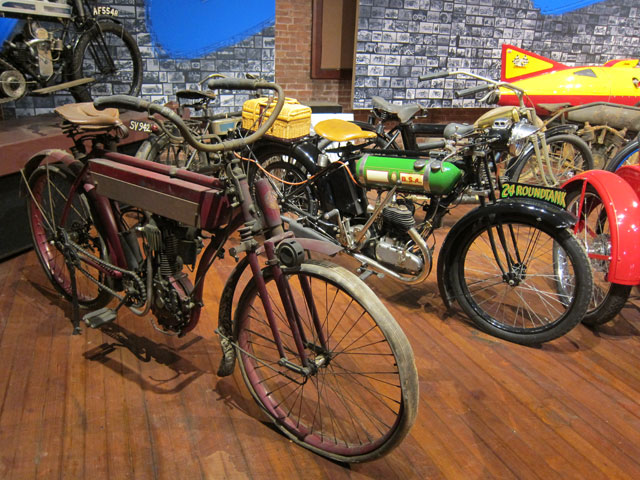 both old (above), and new below. 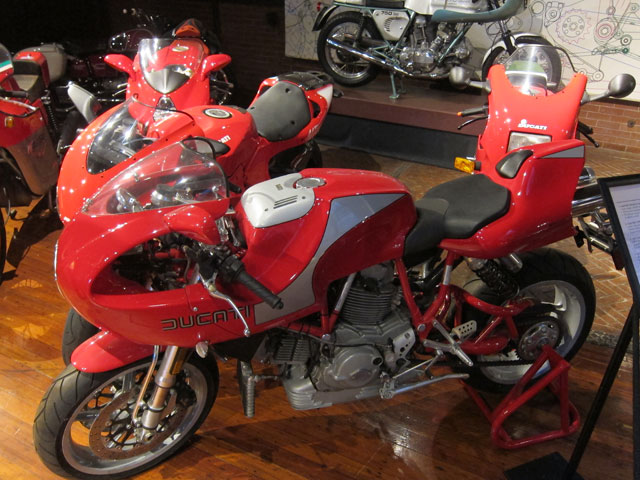 The above image is for Scott. It was difficult stopping to read all the information panels with a 10 year old, but I will be back (hint, Scott)

The Andersons bought their first car in 1899 – an 1899 Winton. In the following decades they bought at least 32 new automobiles, retiring the old ones to the Carriage House. In 1927, they opened the Carriage House for public tours of their “ancient” vehicles. When Isabel died, her will stipulated that the motorcar collection be known as the “Larz Anderson Collection,” and a non-profit be established to oversee the collection. In 1949 the Veteran Motor Car Club of American (VMCCA) assumed stewardship. Fourteen of their cars remain, and in original condition (my favorite way to see cars – sadly some people “over-restore”)

Entrance to the Larz Anderson Collection

And, the Anderson’s first car, an 1899 Winton Phaeton 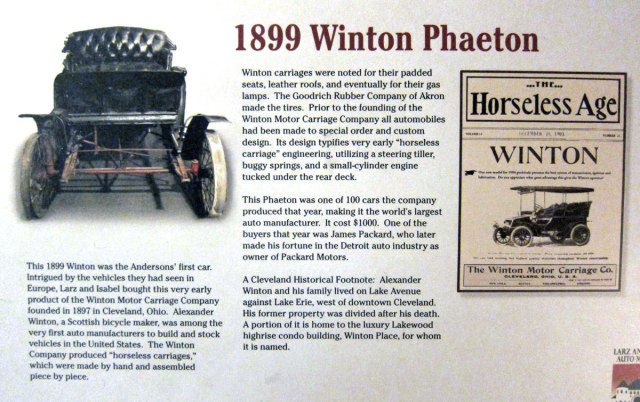 Most interesting radiator cap I have ever seen. Red and Green – Port and Starboard 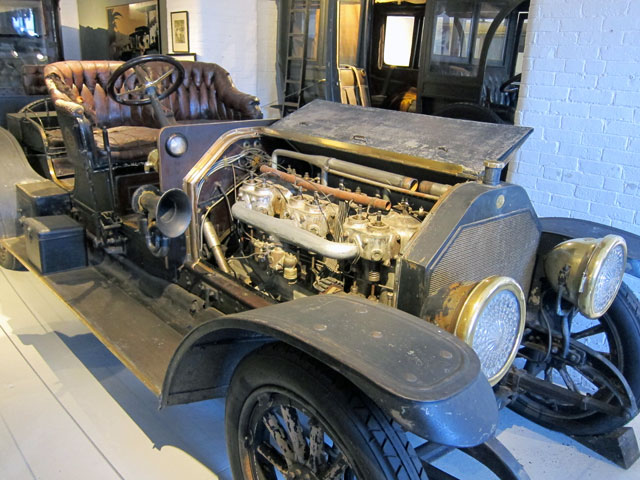 Along with writing books of her travels, Isabel was the first woman licensed to drive in Massachusetts.

Driving along the road on the estate up the hill to where the mansion was, this is the view looking north east to Boston (you can just make out the Prudential Center Building behind some trees). 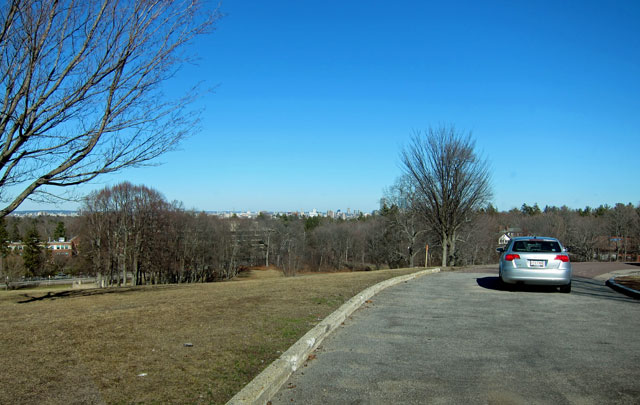 What next Alex?  A look at “what’s near” on Trip-Advisor. How about the zoo? And, off we went to the Stone Zoo in Stoneham, Massachusetts – just minutes from Alex’s home on the other side of the Fells and I-93. Many animals were not out since it was winter, but this is a nicely done 26 acre zoo.

I have never seen a Bald Eagle up close – they are big!!! 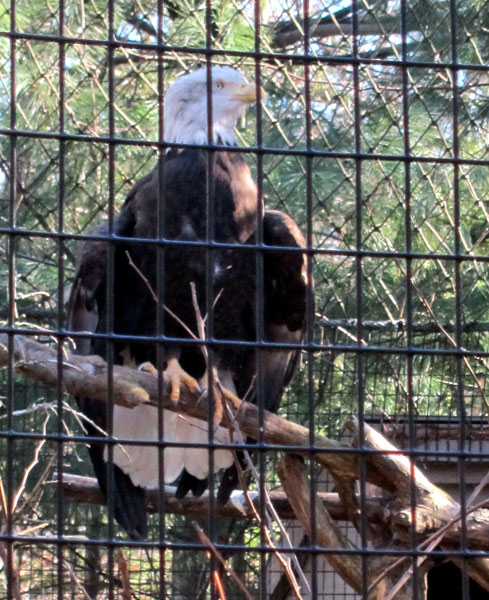 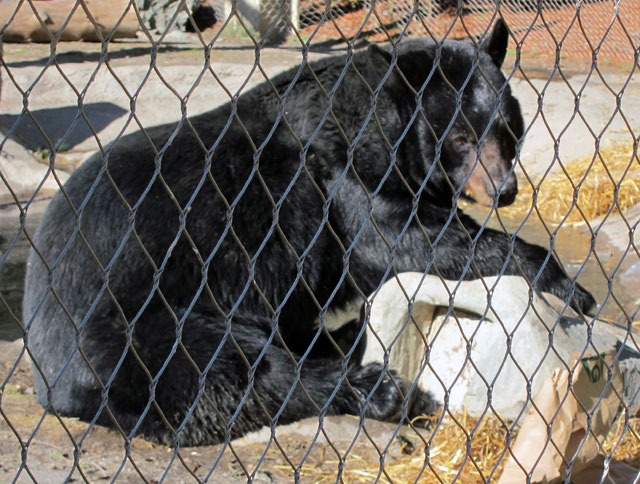 And, Flamingos – in Massachusetts and in winter?  Don’t let the painted backdrop confuse you.

And, some “fast facts” — MONKEY vs APE

We have FaceTimed at least once a day – usually Alex and I say good night to his parents, and they say good morning – or visa versa. I made great progress with the projects I brought: historical society bookkeeping, CLARION invoicing, Ebay listings, and reading, research, and starting writing a booklet I have in the works – WALPOLE’S LOUISA MAY ALCOTT.

And, then there was the evening “binge watching” of MODERN FAMILY. David had bought all the seasons, and what a way to end your day, splitting open your sides. But I also read some travel literature I brought, so who knows?  As always, yours, RAY