It is Presidents Day 2015 – and if you know me, where would I be? Plymouth Notch, Vermont, of course. Especially when it is Presidents’ Day Open House sponsored by the Calvin Coolidge Presidential Foundation with a talk by Rushad Thomas – KEEP COOL AND KEEP COOLIDGE – THE STORY OF THE 1924 PRESIDENTIAL CAMPAIGN. You have probably heard me say before, “vote with your dollars,” and on my list for ages has been to support the Foundation. As I walked in the door and greeted Rushad, I told him of my desire, and he took me right away to the office to meet Kelley. I have now supported their great work as a Contributing Member. In a wonderful relationship, the Foundation is on the State of Vermont’s Calvin Coolidge Historic Site, and about four years ago built new offices and educational center attached to the State’s Welcome Center and Museum. A visit is an absolute must — did you hear me?

When I came back up from the offices, I saw the site’s administrator, Bill Jenney, and visited with him. The State of Vermont is so fortunate, as he is an amazing man, and passionate with his job and the history and importance of this site. Bill told me that my entourage was a hit at the Holiday Open House (read through to the end), and he hopes to have a repeat performance hat fashion show (did you read that my lady friends?). Bill also told me that he has begun work on 2016’s special exhibit – gifts that President Coolidge received. He was the last President who was allowed to keep what was given to him, and the family turned over to the state those items. Bill said we will be amazed at what he is selecting from the archives – hint !! hint !!

Just inside the lecture room, Rushad had selected a number of campaign items from the vaults for display. 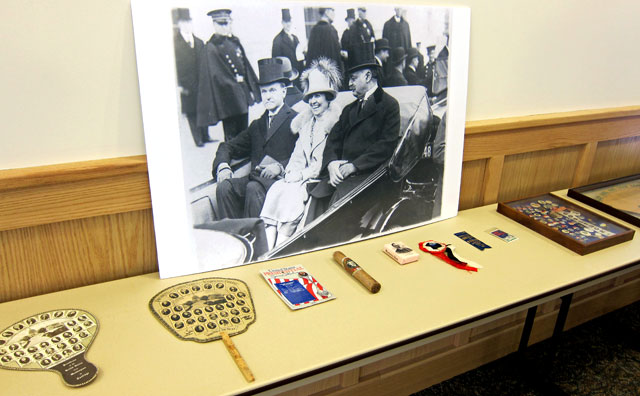 Every time I am at this wonderful historic and bucolic spot I always try to share new images and history for you to absorb. Here is a gallery of a few more things to entice you to visit. Just remember, click on any image to open up the gallery of larger images.

Inside the museum, here is how the site came about.

A closeup of some of the campaign buttons brought out of storage for the lecture. 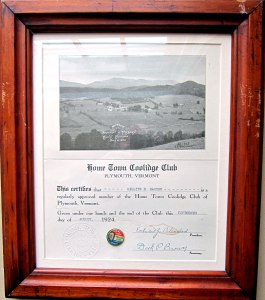 A hometown group began to raise funds for Calvin’s 1924 campaign. Here is the certificate you got. I WANT ONE !

And a few more items.

May I say, that Rushad’s 45 minute talk was outstanding (he is the Program and Editorial Associate at the Calvin Coolidge Presidential Foundation). It put in persecutive for me the politics of the country from Wilson through Harding to Coolidge in an overall world perspective. I never can remember everything, and following his talk, I asked him if he could post his talk so I could read it again. Once I have a link, I will provide it here. And, now Wednesday the 18th, and his talk is on-line on the Coolidge Foundation’s blog. Click this link, it is worth reading for fantastic history. Rushad did a wonderful job compiling and presenting it.

I awoke Tuesday 16 February remembering a few fast facts I thought you would enjoy and I forget to tell you. Men who had voted for Abraham Lincoln voted for Calvin Coolidge 60 years later; this was the second Presidential election women could vote in; Coolidge had only been in office for 8 months when the 1924 election process began; his youngest son died in July 1924 from blood poisoning; on September 9, 1924 a 56 day cross-county road rally began in Plymouth Notch. The idea of the tour came from the Home Town Coolidge Club, and followed the Lincoln Highway, but covered over 6,500 miles. You need to learn more.

And, when I left, I had to drive through my favorite place. 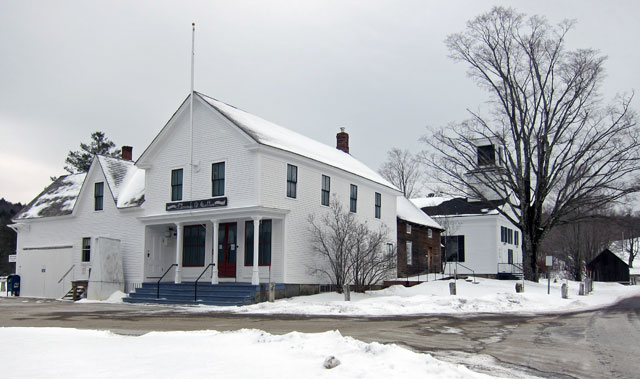 Sad without mounds of snow. Sad when closed.

And, I drove up the hill (mountain) and then back into the village for this view I have not before shared. School House, Cheese Factory to the left, Calvin’s homestead ahead, and church to the right. 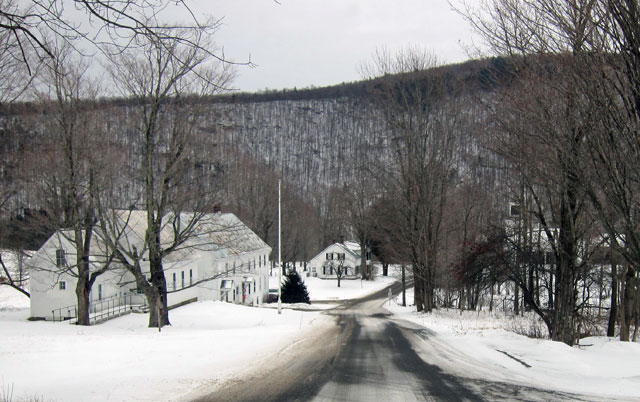 And, on the way out of town. 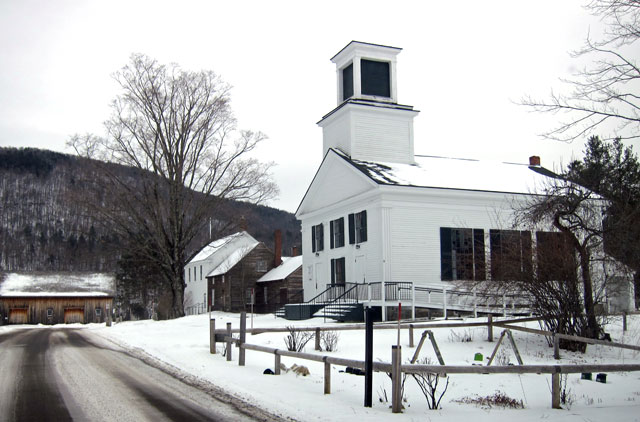 Back on December 5th I was lucky to share the Christmas Open House in Plymouth Notch with Tara, Mimsy, and Carolyn. Sadly, there was not the snow that Tara and I experienced in 2013 for the holiday open house – that was the perfect snowy day. Nor was there a snow squall as I experienced in October of this year. But we had a fantastic time traveling up for lunch, the storyteller, hat show, and the finale – THE HAT CONTEST.

I write so much about this favorite spot of mine, that I will be brief. ME?

I showed the ladies the Summer White House of 1924. Climbing the stairs to the second floor above the general store, here is a view through a window back to the Notch Tea House and the summer cabins that would be rented out (but the Secret Service stayed there when the President was home) 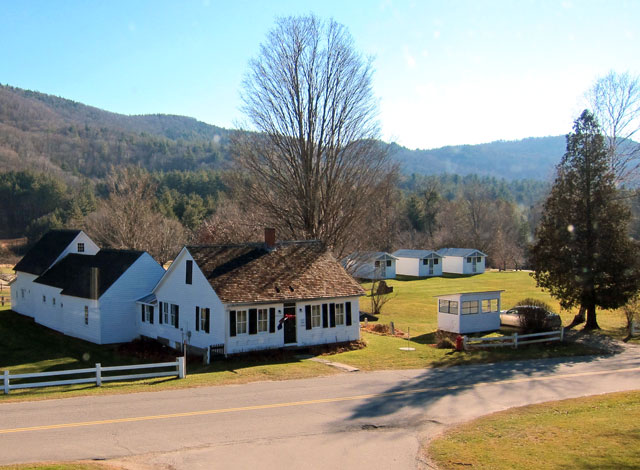 See the lack of snow? So sad in December. Here is a gallery of images upstairs in the dance hall that served as the summer White House. Do visit, there is so much more to see and learn, but here is a sampling, and just click on any image to open up the “gallery” with larger images. 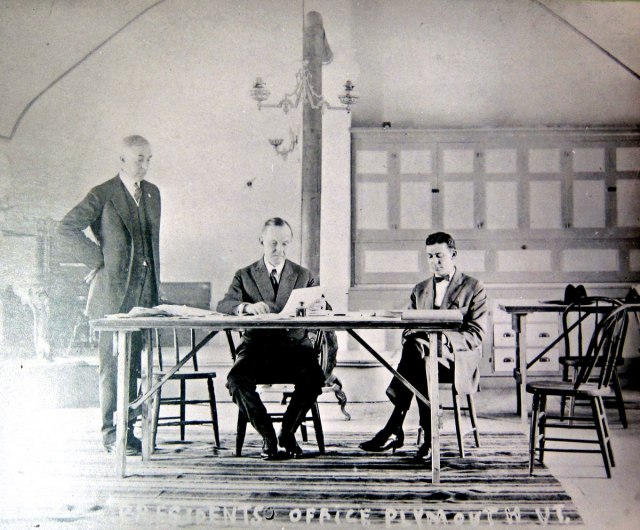 Table is still there, nothing has changed.

Details of what you see in the previous image. 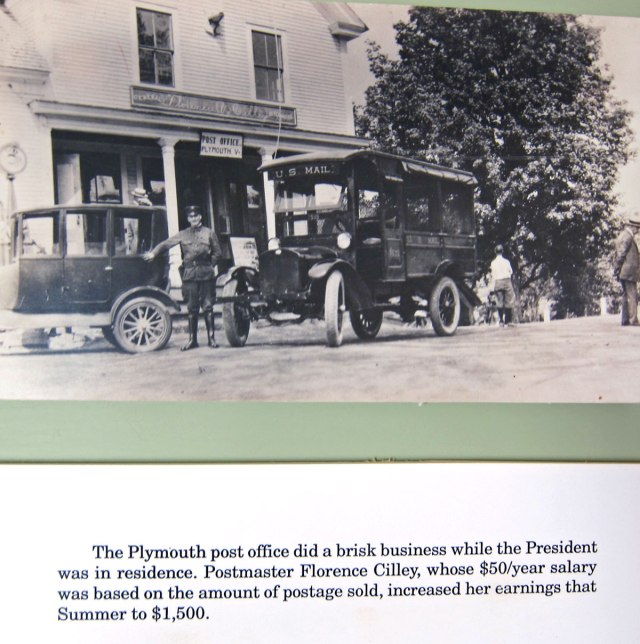 I find these facts about the Post Office fascinating. 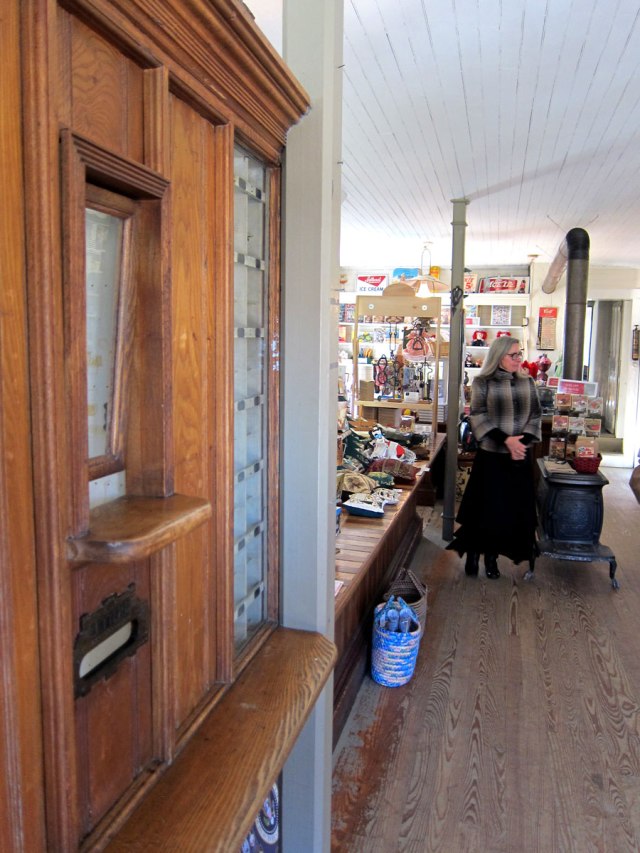 Tara taking in the Country Store.

Looking from Coolidge’s birthplace behind the store back into the store. 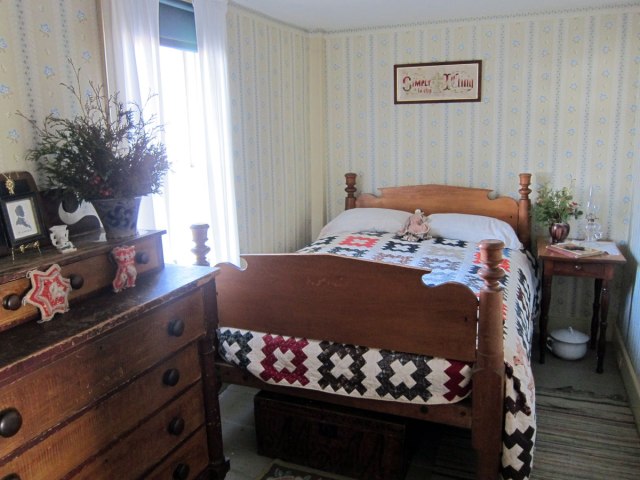 Bed Calvin was born in. All original.

I could not resist this window in the living area of the Coolidge’s birthplace. 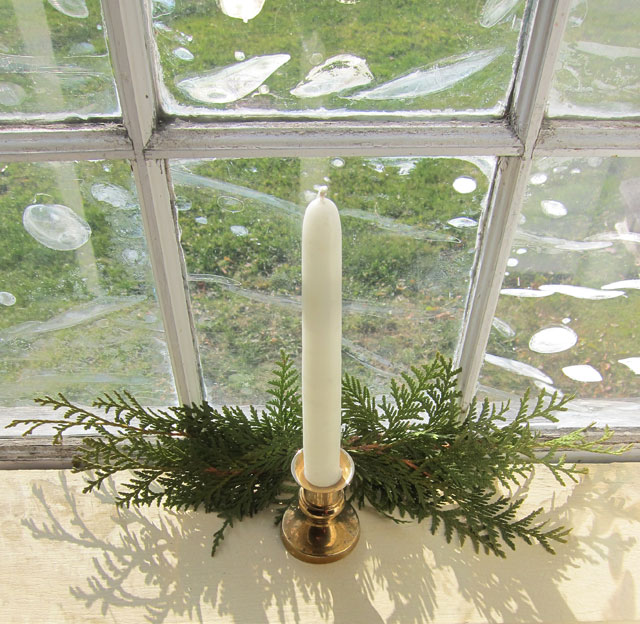 One of the highlights of the day was story teller Willem Lange’s reading of his wonderful holiday tale, “Favor Johnson: A Christmas Story.”  A well-known Vermont author and storyteller, he is also a popular public radio and television personality. Following his reading Carolyn scurried to purchase one of his books while Mimsy looked on. 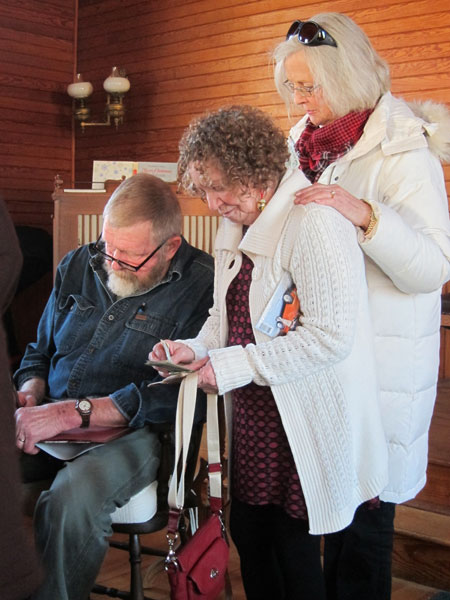 Finally it was time for the Main Event – the hat fashion show put on by the Black River Academy Historical Society from Ludlow. But, we had read the “fine print” that there was going to be prizes for folks coming in their own hats. Partying the night before, we prepared our entries.

So we were ready…

And we walked away with all the prizes — didn’t matter that we were the only ones who entered. 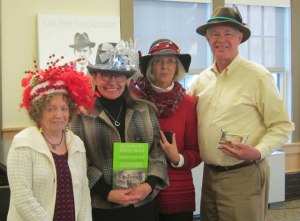 And, on the way home from a perfect day, wouldn’t you stop with all your ladies for wine, cheese, nachos, and wine at the Phelps Barn Pub at the Grafton Inn in Grafton, Vermont?

Hey, a two-month old story, is better than no documented story at all !!! Till next time, yours, RAY