I had hoped to be narrow boating in England and Wales the end of this week, but that did not work out (hopefully now Sept/Oct) so I booked a Road Scholar trip I had been watching, Historic Mansions on the Hudson. Over the last 20 years while living in the Litchfield Hills of Connecticut, and more recently during mini-vacations at The Red Lion Lion I have explored along the Hudson. There is so much to see and do, and I realize that I will never be able to do it all. I have visited many of the mansions, but this trip includes eight, thus my signing up. Glad I did (I think) but have mixed thoughts which I will share later on.

Commitments kept me home until 31 May when I departed for a 4:30 check-in at the Warwick Conference Center in Warwick, NY. My plan was to stop at the Museum Village at Smith’s Clove, Monroe, NY.  I told you back in January that I was there with my 4th and 5th grade teachers 60 years ago. They wanted to check the potential for school trips. I fondly remember the trip and wanted to see it again.

But it was so different. I remembered an open large common. It was smaller now, and had trees – sugar maples that probably were saplings when I was there last. The village grew from the collecting and dream of Roscoe William Smith who made his fortune building the first electric company in the area in 1905. He loved early tools and industry, and collecting things and buildings when easy and cheap. He began his village in 1940, but the war interrupted his efforts, and the opening did not occur until 1950.

There were only a few people there, and a docent was leading a tour for a young couple with two nice children, and I joined in.  My favorite stop was Vernon Drugs moved complete from Florida, New York.

Upon entering, this is the view, and if you know me (by now you should) you know I have always loved 19th century country stores.

JULY 2016 — I am curious, please help and send me a note.  Three to four times this past year I have 100 plus “hits” in a single on the great four images below of the water-power driven fan in the Vernon Drug Store. Is a media class accessing them for experimentation? Is a history class recreating this belt-driven mechanism? Or?  Please help me solve the mystery and tell me how I have helped, I would love to know. Thank you, RAY

View from the back of Vernon Drugs looking out

I immediately knew what this was and did. Do You? And reflecting back I am sure I remember commenting on it then too. Yes, a water pump (since electrified) 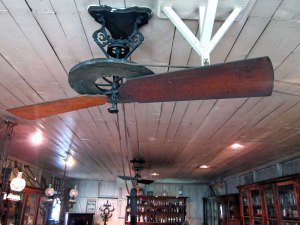 Note the belt comping from the water pump (originally driven by a water turbine in a stream) that drives the ceiling fans. FANTASTIC

Talk about fantastic. How is this soda fountain?

I am sure that it was the impression I had from this store, the 1875 Merritt Store below, and my 1957 visit to Henry Ford’s Greenfield Village that influenced my love affair with country stores. You can click on any image to see these interior shots larger size. 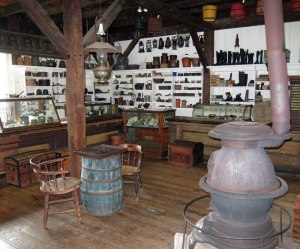 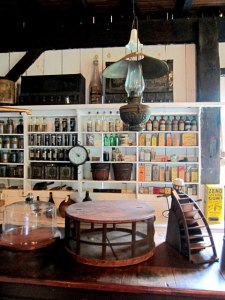 Note Zeno Gum Machine. I have one too, of course. 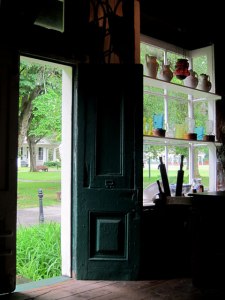 My docent had been at the village for maybe 30 years and was wonderful with the young family. I commented how wonderful the parents were too exposing their children to history, and encouraging them to ask questions and learn. The kids were good, and attentive. Here are some of the stops we made. 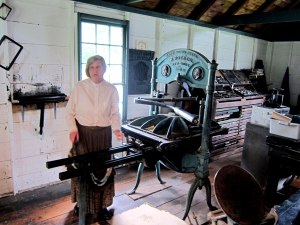 These corn stalk brooms were made differently from the Shaker broom works I saw at Canterbury Shaker Village last year. 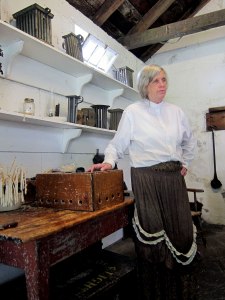 And the obligatory candle making demonstration.

In the natural history building is Harry.  He is 1 of 3 complete Mastodon specimens in the world. He was unearthed just a few miles down the road in Harriman NY in 1952.

Here are a few more shots around the village: 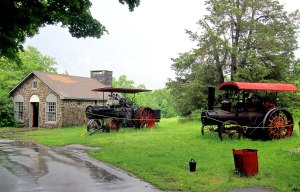 I love steam traction machines. To the left is the early school house.

Enlarge to read this about the tinker.

Owned by the Reformed Church, the Warwick Conference Center is an almost 500 acre retreat, just 50 miles from NYC on the New Jersey border. It was established in 1959. Originally, it was built in the early 1920s by the phone company as a vacation center for switchboard operators as part of their salary package.

The facilities have seen better days, but are clean with a devoted staff. Utilized mainly on the weekends, to generate needed funds, for years it has been a program provider to Road Scholars with programs during the week about half the year. In talking to the coordinators, I came to understand then why so many programs are based from this location. BUT, the downside is spending 2-3 hours a day on a bus traveling to the various historic homes on the Hudson River for this program. My only real complaint, but let’s call it a disappointment. But that keeps the program cost down for meals, lodging (both institutional, but fine), transportation and admissions.  And, in retrospect, to see all these mansions at once, considering the distances involved, this is a good way, particularly for the folks coming to the area for the first time from far away.  But, my other frustration has been the limited time at each place – more on that later.

I also attended because I wanted to attend the lectures on The Robber Barons. Having sold business and financial histories and biography books since 1980, I am pretty familiar with this business era. But, I knew what the Monday morning lecturer was trying to convey (basically a year long course in a few hours), but those not familiar may have not comprehended what he was trying to share.

Monday afternoon we headed to Boscobel in Garrison, NY.

Deteriorated and torn down and stored, this home was resited just above West Point. Here is the view from the front looking down the Hudson River (West Point is off to the right). 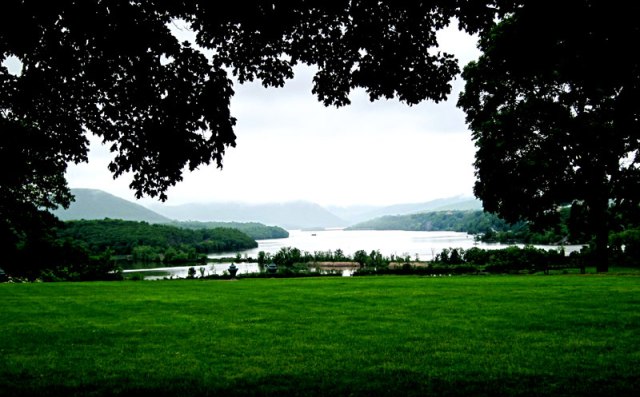 Pretty nice. I was here about 15-16 years ago, and the home has been reinterpreted since more in keeping with what would have originally been in the home. The furnishings are one of the nation’s leading collections of Federal period furniture and decorative arts. But, this is a rebuilt home, with massive replacements, and correct furniture, but not original to the house. I love original. Remember – click on an image to open large views.

As it was being torn down to be moved.

Interior view on the second floor above the entrance prior to being moved.

Rebuilding – with so much new!

Known as the American Leonardo, Morse never made it as an artist, but his success with the telegraph and its code enabled him to buy this home in 1847. His family used it as a summer retreat for 25 years. The Young family were the next caretakers. Annette Young lived there until 1975 preserving the house with her family’s original furnishings. She made it possible for the estate to become a time-capsule museum for the ages.

View of the Hudson River from Locust Grove. 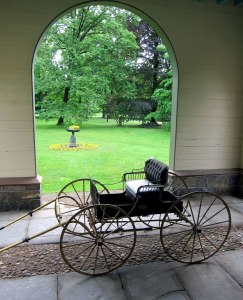 Carriage in the entryway

Billiard room. I learned that billiards is played differently from pool. 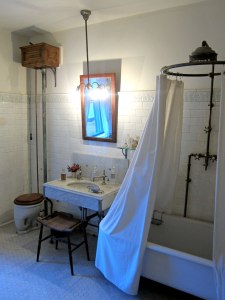 Running water was installed in 1901. 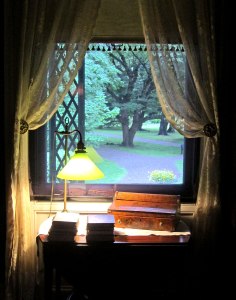 View out from the library.

The next stop for the day was Wilderstein in Rhinebeck, NY.

Originally built in 1852 as an Italianate Villa, it was transformed in 1888 into the Queen Anne Victorian seen today. Three generations of the Suckley family lived there. The last owner, Margaret Lynch Suckley was born there in 1891, and died in 1991. To preserve things as they were, in 1983 she donated the estate to a non-profit for its preservation. Margaret was a “close friend” of FDR working at his library, keeping him company at Hyde Park and in DC. She gave Roosevelt his famous Scottie, Fala, and was at Warm Springs when he died. Untouched, the interior is a treasure trove of history, as it was. Outside, work was needed. Last painted in 1910, in 1985 extensive exterior repairs were made, and re-painting accomplished.

From the porch looking towards the Hudson River.

The soon to be restored carriage barn.

The final stop for the day was down the road in Staatsburgh, NY, at Staatsburgh, the 79-room Gilded Age mansion of financier and philanthropist Ogden Mills and his socially prominent wife, Ruth Livingston Mills.  The Livingston family received original patents for extensive land holdings in the area (old money based on land). Originally built in 1832, the Mills Mansion was expanded in 1896 in the Beaux Arts style. In social circles, Ruth took on Mrs. Astor and her “400” but never beat her at her own social game. 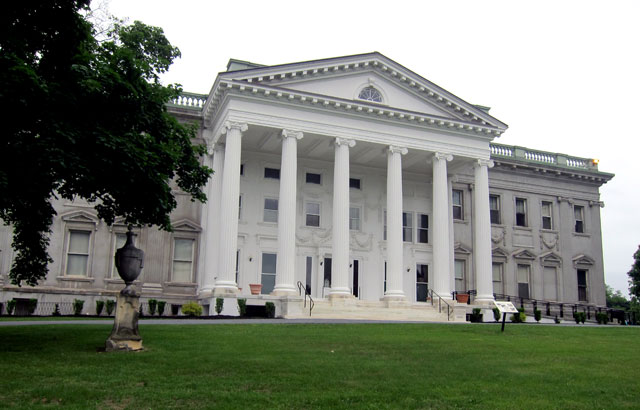 The Mills Mansion in Staatsburgh, NY

Hudson from the Mills Mansion.

A long day, and with about 3 bus hours too. Four mansions down, and four to go. On Wednesday FDR’s Hyde Park and the Vanderbilt Mansion. Thursday to Tarrytown for Lyndhurst and Kykuit, the estate of  four Rockefeller generations.

I will be giving you more analysis and recommendations you should follow. But, I am having a harder time getting to writing because of all I do in a day, so I will not finish writing about those four mansions and the trip home on Friday and Saturday until well after my return. Sorry you will have to wait, but you will not be disappointed. As always, yours, RAY

SEPTEMBER 17, 2016 — NOTE TO SELF – I never got back to this, and have great images saved in laptop June 2015-b.  Includes Vanderbilt Mansion, Washington’s Headquarters in Newburgh, Hudson River Maritime Museum in Kingston, Old Rhinebeck Aerodome, and more.  Need to work on this for my own memory.

July 11, 2020 — NOTE TO SELF – Hudson River Mansions I need to revisit and write about. Stored in the photos include Kykuit and Rockefeller’s Model A Ford phaeton that I saw in a book growing up. NEED TO RE-EXPLORE THIS AREA.