I am sitting on my porch, enjoying a breeze, while finally getting to write about my fun day with Number Two Son, Gary, this past Sunday.  A couple weeks ago he emailed saying, “let’s get together on May 24th.” “Perfect,” I replied,”only day on the long weekend that I do not have 3 events scheduled. But he and I were both so busy that we never had the time to plan what to do, and where to meet. The day approached, we threw ideas back and forth. At one point I suggested America’s Stonehenge in Salem, NH, but having stopped only at the gift shop and entrance last year, I was not impressed and did not want to waste the time. It was almost Sunday and I mentioned museums in Manchester and Merrimack, but it was going to be too nice a day to be inside. We decided on America’s Stonehenge – you need to at least say you were there. But, where to meet. It was going to be lunch time when we met, so as I was walking out the door, a quick Google search and I picked the COACH STOP in Londonderry, and emailed Gary. Built in 1810, then inn sounded just like what I like.

As I approached the inn I realized that Gary and I had dined there before prior to attending a concert. He got there first, and realized the same thing – much laughter followed. But we had loved it. The Coach Stop is great. We ate in the dining room before so decided to check out the tavern on the second floor – wonderful ambience. And then we saw the covered deck off the bar. That is where we settled in. Ironically we narrowed in on the same Coach Burger, and decided to have nachos as an appetizer. Here are our meals, with nachos partially eaten. 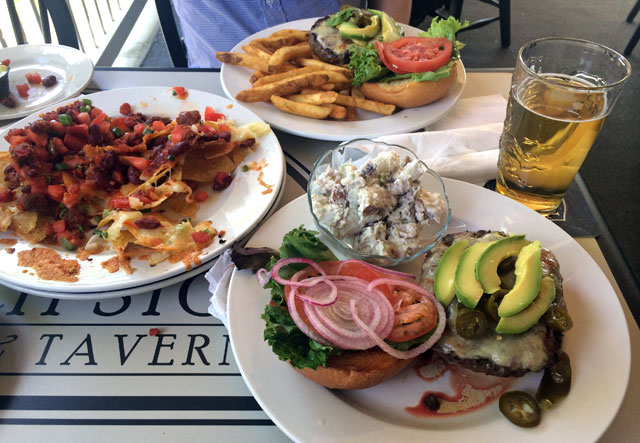 I recently read that pictures of meals are second only to “selfies” on social media. But who knows? I just like to share my meal experiences.

We then headed off to America’s Stonehenge in North Salem. 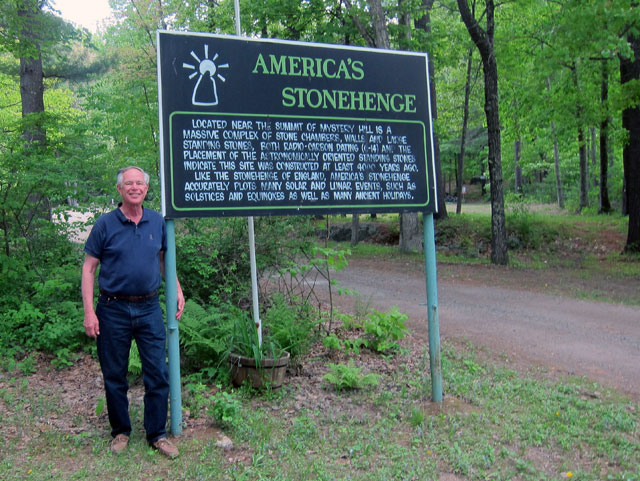 How else would you enter an ancient megalithic site but through a faux log cabin? 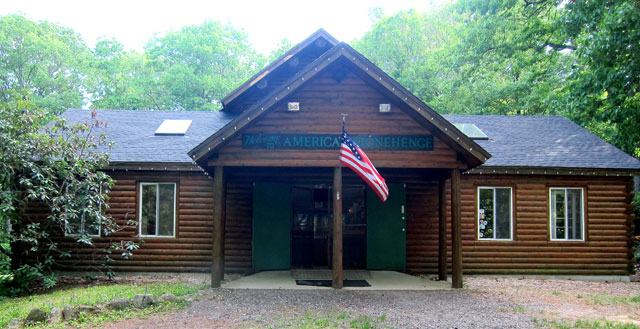 Now, to be honest (I always am) I have become fascinated with the History Channel 2 series, ANCIENT ALIENS, and their AMERICA UNEARTHED. So much we did not learn in school, and so much has been discovered and analyzed since. There is something to the numerous similar sites around the globe of similar construction and astronomical alignment. And the precise structures are amazing, and defy understanding as to how they were constructed. But this site in New Hampshire does not seem to have the same stature, nor precision of construction. It leaves more questions than delivering answers. But we went in anyway.

Here is a model of the site in the somewhat poor and deficient visitor center. 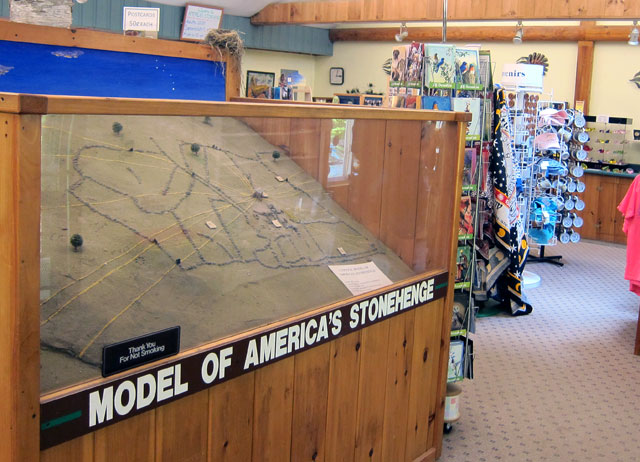 We paid our admission, watched the also poor introductory video (about 20 years old), and then entered the site. 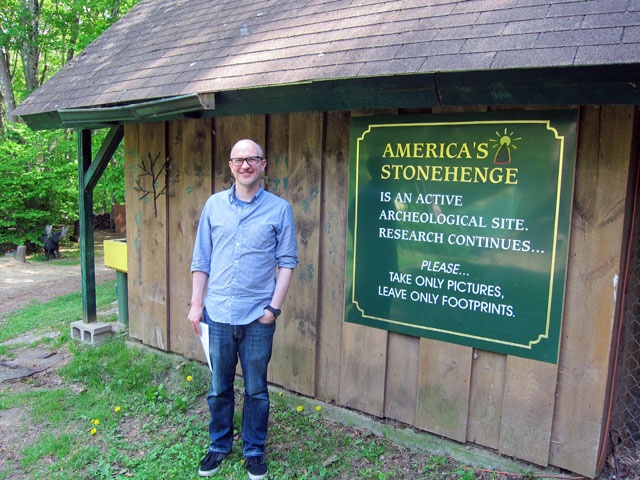 Briefly, the site does not show up in the histories until the early 19th century. The mid-19th century owner sold off stones, assembled his own structures – basically doing what he wanted. Before we went I assembled a list of websites to read, and let me just present these for your exploration in making up your own mind:

As we entered we first came across an area set up like an Indian camp for school group education. But how can you take something seriously when an old rug is used for a buffalo hide? And when seeing a chipmunk crossing sign as you enter an ancient site, come on. We were cracking up.  But, here are images of what we saw, and click on any one to open a slide show of larger images. 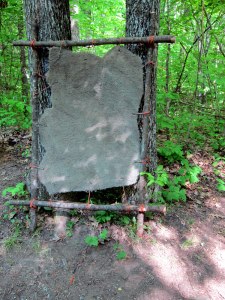 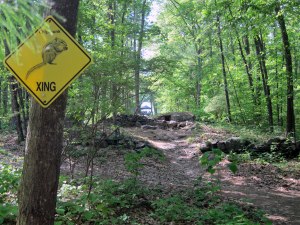 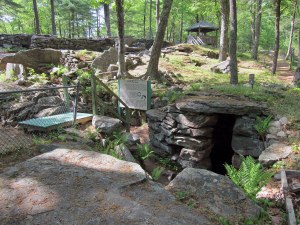 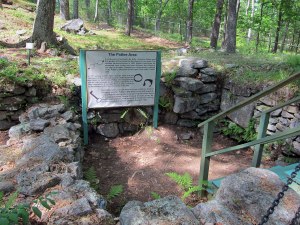 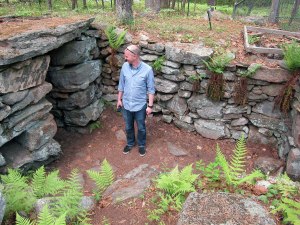 Gary had stopped laughing by now, but still… 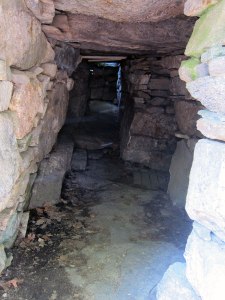 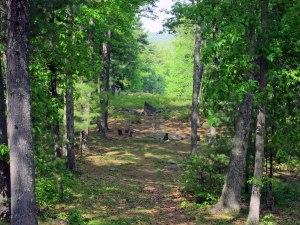 Looking out to the Mid-Summer Sun-Rise astronomical stone marker 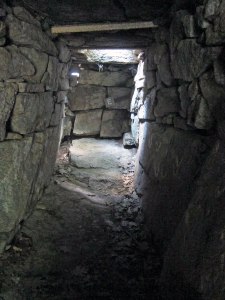 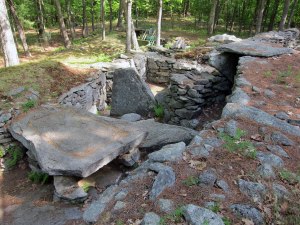 The Sacrificial Table. Ironically the grooves are the same as what would have been cut for making lye in Colonial times. 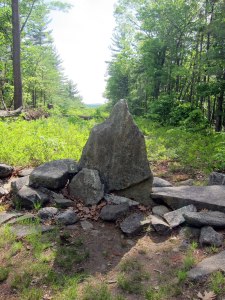 Close up of one of the astronomical alignment stones.

Alright, we can now say that we have been there. A nice walk in the woods ending at the Alpaca area (again, get serious). And if you wish, you can snowshoe in the winter.

You guessed it, I am still skeptical, only because I have been to “the” Stonehenge several times, and other early archeological sites of importance. There is no comparison to the quality of workmanship or site organization elsewhere. BUT, I have now been there, and got to share the time with Gary.

We headed out to catch a small bite to eat before heading our own ways home. But we cherish our day visits, and will do it again soon. And, the COACH STOP may even be the beginning or end of our next fun exploration.

Then it was Memorial Day, and I “played” in two different centuries. These pictures tell all.

At the Memorial Day parade in town, CORNELIA and I raised $107.32 in donations for the Fall Mountain Food Shelf, and Our Place Drop-In Center from popcorn customers. 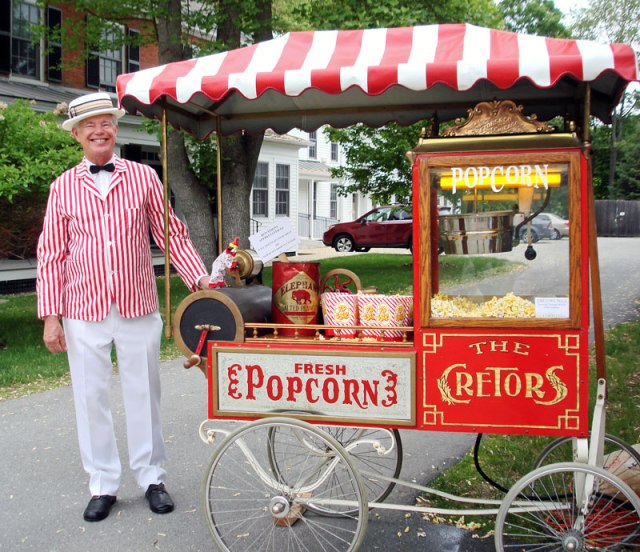 And in the evening I attended Benjamin Bellows’ 303rd birthday party at the Bellows-Walpole Inn. Tara and I were asked to add to the period touch. 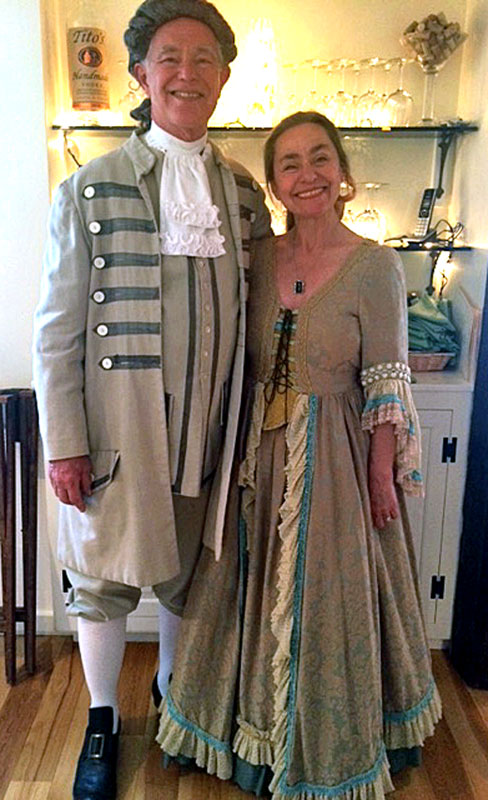 So, more fun, more to share, and remember I write for myself, but enjoy sharing. Hope you had fun too, check out America’s Stonehenge (on-line) and see what you think. More coming soon, yours, RAY