Sadly I left the Atheneum Hotel about 12:30 on Friday the 27th, and

travelled back roads to Corning and then to Pine City, NY where I stayed at one of the best B&Bs I have stayed in – The Rufus Tanner House.  Donna and Rick have done a splendid job for over a decade, and if you are in the Elmira area I highly recommend you plan to stay with them. 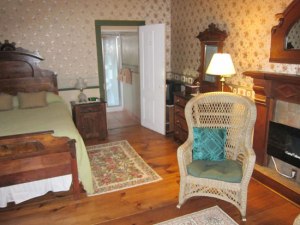 My room at The Rufus Tanner House, but check their website for more.

The plan for Saturday was to backroad home via Cooperstown.  But first I had to make a few visits in Elmira.  Now, if I asked you, “where is Mark Twain buried?”  you may say Redding, Connecticut (next to my hometown) where he died, or Hartford where he had lived or in Missouri where he was born.  I was surprised to learn he was there in Elmira, but it becomes clear when you realize that his wife was from there, and they summered there for years, providing stability in his life.  In fact, built on the family’s Quarry Farm on East Hill, and patterned after a riverboat pilot house this octagonal building is where he wrote eight of his famous works.

Mark Twain’s study on the campus of Elmira College.

preserved with original furnishings as though he left just yesterday.  Here is some great history I found on NPR.

Out of Elmira heading east on I-86/NY 17, I saw a sign, Newtown Battlefield Historic Site.  “What? Need to know what that is about.”   And since you are now wondering too, it was here in August, 1779, the Continental Army engaged in battle

with the British regulars, Loyalist rangers and 1000 Iroquois Indian warriors.  Known as the Sullivan-Clinton Campaign, this was the decisive clash in one of the largest offensive campaigns of the American Revolution. This expedition has been regarded as punishment to several tribes among the Six Nations of the Iroquois Confederacy who had sided with the British in the war and had attacked frontier settlements.

Passing through Binghamton, I travelled a few miles on I-88 and exited for NY7 (yes the same NY7 that I travel from Bennington, VT west to Troy and points west).  Not having been in this part of the state before, I had to experience the back roads and villages.  I stopped at three interesting antique centers: a barn, a grist mill, and an old factory.  Do you remember exactly 2 years ago today my post when I proclaimed

My “Billy” The Rocking Goat

“Ray, the Great American Picker” when in Vermont I purchased a rare circa 1905 De Moulin Bros. Rollicking Mustang Goat?  Thanks to a “Google-Alert” I subsequently sent it to be proudly displayed at the De Moulin Museum in Illinois (great website, take a look – you can see my “former” Billy on the About Museum page).  Well, here was another one — so back to the car for IPhone, I call the museum, and John who I worked with answered.  “Yes, I do remember you, and am standing right next to your goat.”  “Well, I am next to another one, may I send you a picture,?” I asked.  Well, the one I

now saw was made the majority of the years the company was manufacturing, so one of the more common, and John had one.  “But, it is so great to have another set of eyes, keep searching,” he encouraged me.  So, Ray will continue to be one of the great “American Pickers”  — I am because I found three asterisks in printer’s type for Jan recently — a punctuation mark seldom cast in type.

You know I am not much of a sports buff, but thought I should see the Baseball Hall of Fame in Cooperstown, but somehow was stalling so maybe it would be closed when I arrived.

Why Cooperstown, you ask?  Abner Doubleday (the famed Civil War General from there) is credited with inventing the game as we know it in 1839 in town.  I arrived at the museum at 3:45 with an hour and a quarter before closing, and figured, “I am here…”  Glad I did, and am sorry that I had such little time, but at least I made it.  An exceptionally well done museum, and I can see if you knew the players and teams how much meaning it would have, but I spent the most time with the early history displays learning the times and culture when it was introduced that lead to it becoming America’s Favorite Pastime.  I did get to walk through and see (but not read) everything, but one recommendation if you have limited time — SKIP THE MOVIE. 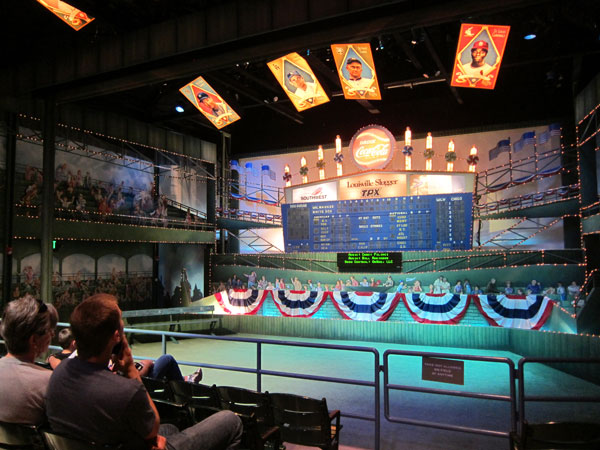 I love starting with the introductory films because of the capsule of history they give, but this film was just RAH, RAH, BASEBALL.  I could have used that 13 minutes to better advantage.  Cooperstown is quaint at the foot of Otsego Lake, and baseball stores predominate in the Victorian storefronts.

The image below has an original ticket booth from Yankee Stadium, used up to 1979 if I remember correctly, along with statues of longtime (decades) of unique fans at various stadiums — fun.

And here is the main focal point of the main floor Hall of Fame. 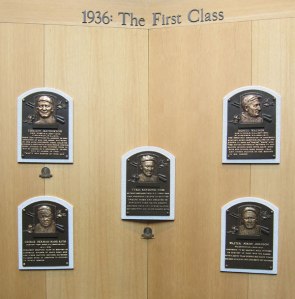 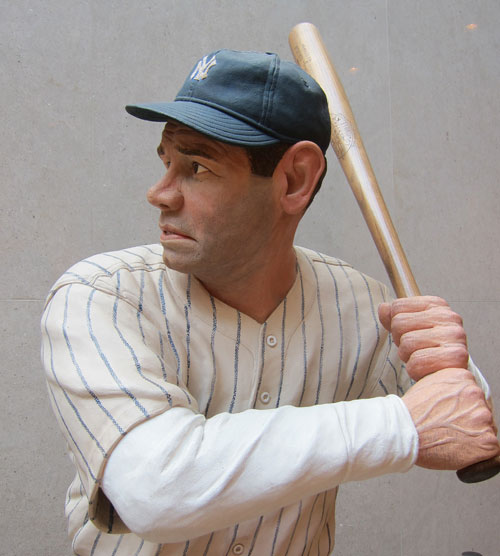 Wooden statue of “The Babe.”

Upon leaving I followed Route 31 up the east side of the lake taking in gorgeous views.  Reaching US Route 20, I headed east to Albany on this old original route.  I have been recently finding websites for the “old roads” and the Route 20 Association of New York State is doing a good job of sharing and preserving our road heritage.  I was amazed that most of the road was divided four lanes, and the views commanding.  You can almost make as good a time (except for passing through villages) as if on the NY State Thruway just north to replace US 20.

What is next?  Well I know, and will soon share.