NOSTALGIA TRIP BACK FROM QM2 via WILTON and NEW PRESTON, CT

Well, I am home from my eleven days on the Queen Mary 2.  I was in my car by 9AM for the direct 4 ½ hour drive back home, but my plan was to travel through my home town in Wilton, CT and then traverse the back roads up to my previous shop and home with Cathy in New Preston.  I arrived home by 6:30 completing the 4 ½ hour drive in about 9 ½ hours – true shunpiking!

Of course the first thing I did arriving home was to go on-line and try to figure out why I could not insert images into my blog posts.  One item I found while googling was to clear cookies.  I did that and all my WordPress functions returned, but shortly vanished after checking emails again.  Some more experimentation, and then I remembered that just before this problem came up on QM2 I was surprised that Comcast changed the home page for webmail.  So, some more experimentation, and I ascertained that the Comcast cookie is the problem.  But, only solved with a work around – I have to delete cookies each time to gain all my WordPress functionality.  No problem, I have found with my various computers that as they age there are more hiccups and incompatibilities with all the various software and interfaces with different websites.  So, I inserted the pictures for the Saint John and Halifax post and will get to Quebec City.

But, on my trip home I had a grand time.  I have said that I do my blogs for my own pleasure, so you need not go further, but following is a look at some of my past life.  Tears try to roll down my cheeks as I travel sometimes, and it becomes mind-boggling when you are somewhere and start thinking, “50 (or 60) years ago I did this here.”  I find it really hard to look back, and I usually avoid my past, but it is good to reflect back.  You can’t go back, but at least the memories are there.  So, here goes. (you can stop here – the rest is just for my memories)

I had no problem leaving Brooklyn and worked my way over to the Merritt Parkway (one of the first limited access roads in the US) and exited at the original US 7 Norwalk exit (now there is a new US 7 bypass exit) turning north to my hometown of Wilton, Connecticut.  “Ray, why don’t you stop and see Leland,” I said to Ray.  Every time I pass through town I usually stop and see my high school friend, and it had been over 7 or 8 years since I last saw him.  Stopping at his office, Michelle called him at home, and soon we were visiting in his office.  Continuing driving up US 7 (as you know once leaving Kent, CT this is my favorite road in the US, especially along the Housatonic River in Cornwall, CT – then there is Stockbridge, MA and the Red Lion Inn – not to mention travelling in Vermont on US 7).  I then turned left onto Route 33 to enter Wilton Center.  From here I will share some images with you along with commentary on my reminiscences.

This is the former Center School where I spent Kindergarten through 4thgrade.  My 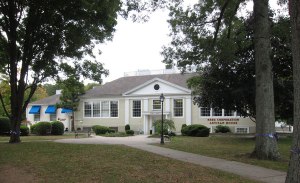 mother was the secretary here, and then followed me to my next school for grades 5 and 6 (yes I had to be good, but I did get sent to the principal once when I argued with Jerry R. that my stamp collection was better than his – I died from my mother’s stare).  The whole center of town has expanded exponentially, and my school (I even remember Bus No. 1 built in the 1930s with holes in the floor – no OSHA then) became commercial spaces.  My Kindergarten room is on the left front, and the next picture is the actual room except with walls changed with the entrance going right into the

office instead of the original hallway.

This bank building was the library, but sadly the original front part, which looked like Monticello, was removed (Center School is to the rear right).  Here was my introduction to books, and starting in 7thgrade (I had to turn down being on the basketball team to do so) I shelved books two afternoons a week making $1.25 for an hour and a half of pleasurable work.  Ms. Olivia Johnson, the librarian (probably over 60 years of age at the time – 53 years ago), was good to me – obviously since I remember her name,

Back half of the former Wilton Library

something I have a hard time doing.  After “work” I would walk down the street and sit on this stone wall in front of the former Village Market waiting for my Dad to pick me up on his way home. Usually I would first go to the drug store/soda fountain and buy two rolls of life savers for 5 cents each.  I would get butterscotch and cinnamon, and have one of each at once – oh, I can still taste them, but it has been many, many decades! 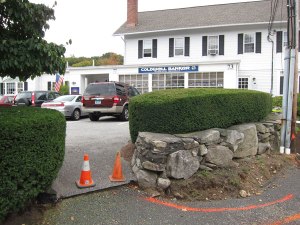 A favorite sitting spot waiting for my Dad

Continuing up Route 33 I entered Hillside Cemetery to visit my Dad, and reading his stone I had forgotten it has been 9 years since he moved here.  This image shows the Boas plot with my grandparents.  My Dad’s grave is marked with the flag from the American Legion.  For the Memorial Day parades I would ride my decorated balloon tire bike 5 miles to the village center to join the parade.  My Dad would march with the legion for the 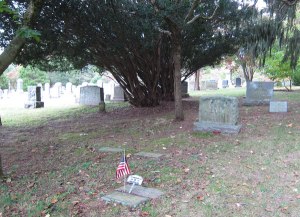 ceremonies at the flag pole just adjacent to his grave.  One year I badly wanted a shell casing, and on the last volley (he was on the firing squad) he did not eject the shell to save it for me.  I remember another child going up to him saying, “Mister, eject your shell so I can have it!”  My Dad did not – I got it instead.

Leaving the cemetery I turned left on Route 33 until my right turn onto Nod Hill Road towards the family properties.  In the mid 1920s my grandfather was the youngest Chief of Staff at Montefiore Hospital in the Bronx.  Many people were getting summer homes in the country (nothing is new), and they found an old farmhouse built in 1875 with a barn across the street – the price was $3,000 for the buildings and over 200 acres. 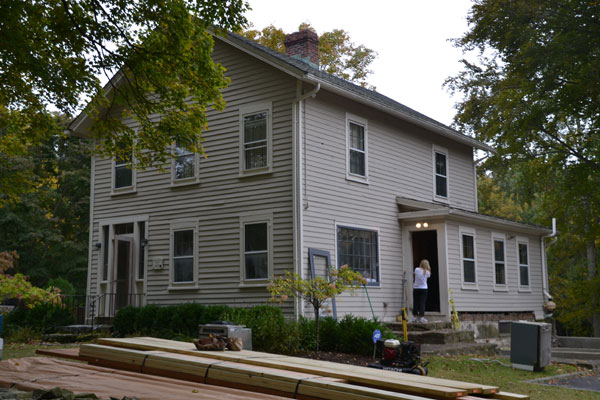 “But I don’t want the 200 acres, only the house and barn,” my grandfather told the farmer, “what will you sell me just the house and barn for?”  “You don’t understand,” said the farmer, “the price is $3,000 for the house and barn, I am giving you the 200 acres.”  If you know Wilton, you are aware the tens of millions that land is worth today – my grandmother started selling it off in the early 60s.”  You know my timing by now.  I arrived at the old farmhouse after driving down Teapot Road developed by my grandmother, and there was construction at the house in earnest.  I parked and in a light rain got out with my camera.  The young lady at the doorway saw me, and came over to me.  “Would you like to know about your house?” I asked.  Laura was young and delightful.  Even with her baby in the car she immediately took me on a tour.  They had owned our homestead for 7 years, and today was a rip-out day for a total restoration.  We walked though the first floor my camera snapping away – what an absolute thrill – and the memories of my grandmother, holidays, etc. 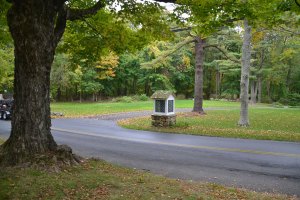 This image shows the open space where the barn was located, but moved by my grandmother through the woods to the end of Boas Lane which she built to open up our land at the end of Partrick Lane.  The well house has always been there as well as the trees you see.  When I was about two my aunt was learning to drive.  As she was pulling down the drive my Dad jumped into the car yelling to her to stop.  I had been run over and was under the car – cars where higher off the ground then.  Obviously I survived after exercising my vocal chords while regurgitating gravel.

Going another two tenths of a mile (I had a speedometer on my English bike) I turned right onto Partrick Lane to see number 15 which my Dad built in 1948 and we moved into, I believe, in January 1949 – my home until graduation from high school.  The house sold in November 2011 for $842,000   but in 2007 it sold for 1.1 million (my Dad would be shocked). But first opposite my house is the Weinberg’s old barn/garage.  The Whites

bought from the Weinbergs, and in the early 1960s Mr. White bought TR3As for each of his sons – one black and one white.  The cars were parked in this structure, and often I got a ride.  Yes, this was the seed that finally lead (over 50 years later) to the quest that brought Black Beauty into my life.

This is my childhood home, but what my Dad built is on the left, and the original two car garage (expanded to 8 by my Dad for his car hobby) is on the right, but joined over the years by new owner’s various additions. 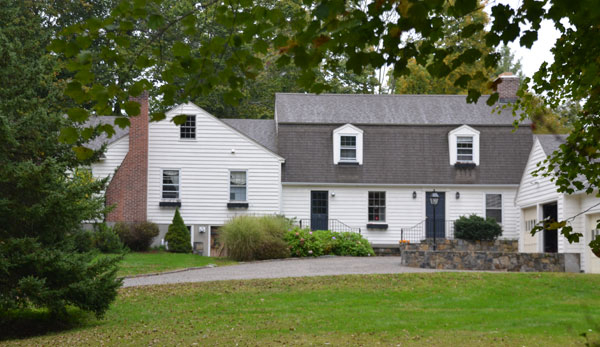 The rocks you see (below) in a field were originally on the edge of woods and provided many enjoyable hours of play for me as my fort built and rebuilt over many years. 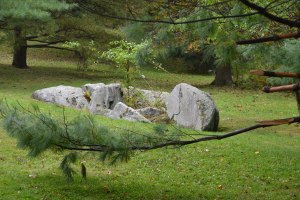 Site of my many FORTS 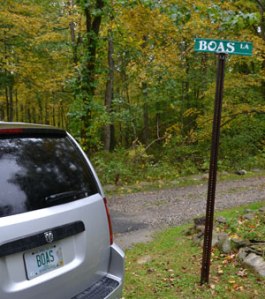 At the end of Partrick Lane is Boas Lane which opened up our back land to sell off building lots.  My Dad and Uncle bought from the Weinbergs 50 or more acres that were eventually sold to the town for the Town Forest which eventually included the old Boy Scout property – now 188 acres.  Even though it was raining I wanted to find the old “Indian Rock House” as I called it, a rock ledge overhang that I used to play at, but had not seen in well over 53 years.  Not sure if I found it, I did see many rock formations, but they were so small as compared to what I remembered – ha, ha.

I continued north on Nod Hill Road past the Weir Farm National Historic Site   (where I used to play and fish – caught my finger one day instead of a sunfish) and down the hill to Branchville to pick up US 7 to Danbury.  US 7 runs into I-84 for awhile (I rode in a 1931 Model A Two Door Phaeton with my Dad for the opening ceremonies for this stretch of interstate in the early 1960s) before US 7 bears off to the left.   I headed through New Milford picking up US 202 to New Preston where Cathy and I lived from 1995 until our move to New Hampshire in 2002.  The first image shows my office (off the porch) overhanging the waterfall, and the second image the former home of my bookshop. 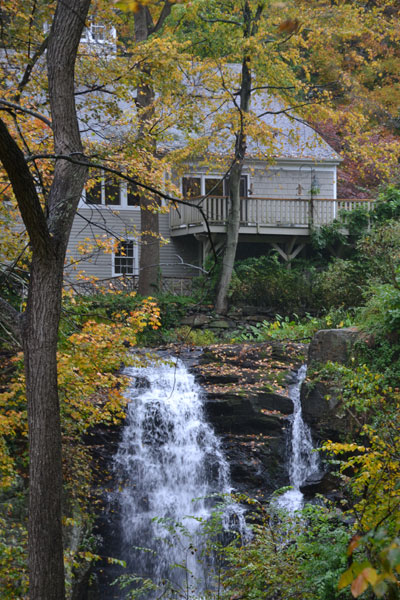 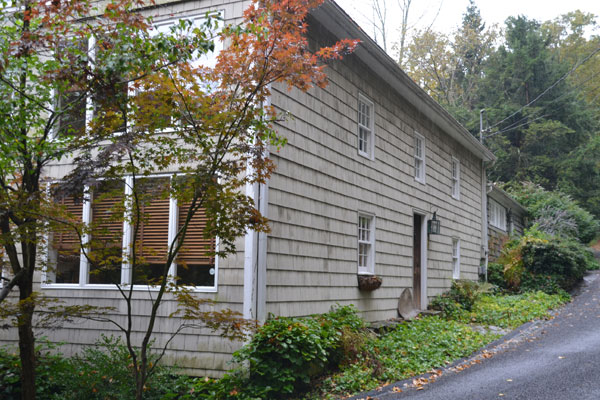 Thank you (if you made it this far) for listening to my memories.  Tearfully, yours, RAY

7 Responses to NOSTALGIA TRIP BACK FROM QM2 via WILTON and NEW PRESTON, CT