Yesterday, August 4th, I headed over to the Dorset, Vermont area for my fifth trip to work in a house with 30,000 books.  I started pulling books from there in May, and surprised myself that I could still pull things of interest since I am good at what I do and usually don’t miss much.  Yesterday I spent five straight hours scanning shelves and pulling, but a few of my trips have been 8 to 10 hours.

I had thought about visiting the Canterbury Shaker Village in NH yesterday, so being in a “vacation” mode, once I was done “booking” I decided to go touring.  (Of course, once we moved to New Hampshire, Cathy and I felt that every day we were on vacation, and I still feel that way).   I headed north on my favorite road (US Route 7) to an antique shop I remembered in Danby.  I noted a road across the street, and liking to explore asked the clerk where it headed.  “Up at Nichol’s country store turn left, stay on the pavement and in about 4 miles you will get to Danby Four Corners, but it is not really four corners,” she said, and I vaguely remembered entering the spot once from the other direction in “Black Beauty.”  “Turn left at the general store that just reopened, and follow the road to Pawlet.”  “Yes, I often stop at Mach’s General Store in Pawlet on Route 30 to get a sandwich while traversing the area,”  I told her.

I browsed the antique shop – don’t need anything, but you never know – and crossed Route 7 to do some SHUNPIKING.  In moments I passed a sign that I had seen before but could not remember where (there is a similar looking village in Peru, Vermont) which was about Pearl Buck.  Now fixed in my mind is Danby where she died in March, 1973 (literary quiz comes later). 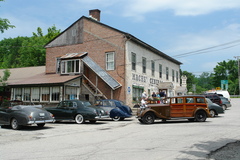 Over the hills I went, and soon arrived at Mach’s  where I had a nice salad made to order, in fact I saw the young helper run to the vegetable case to get a needed cucumber.  I enjoyed my salad on the picnic bench in front, and when I left I headed down the hill which I had never done before to the few houses in the village along the river.  A great old building housed the town offices, and across the street I went into the library (one of my hobbies stopping in old libraries) which appeared to be in an old school – much like my grade school in Wilton, CT, but smaller.  It was well done.   I then headed down Route 30 and through Dorset itself which has always been one of the prettiest of villages and alive and vibrant.

Now my experience in the Dorset, Manchester area goes back some time, so I feel I can make some observations.  Neighbors of ours in Wilton moved to Manchester Center and then Dorset in the late 1950s when they retired, and we visited them as a family.  I remember that trip up US Route 7 and stopping to play with the deer at the Vermont old soldier’s home across from the Blue Benn diner in Bennington (again on my favorite US Route 7).  And in 1964, after graduating from high school, I was camping in Vermont (including Chester) in my 1929 Model A Ford roadster and visited Mrs. Anderson at her home in Dorset across the street from golf course – 125 years old, the Dorset Field Club is the oldest continuously operating golf course in the US.  We had lunch at the club (at 90 years old she recently had a hole in one), and she took me over to the Dorset Playhouse to meet the actors since I was heading off to Northwestern majoring in Radio, TV and Film (switched soon to History, wasn’t about to compete with Gregory Peck’s son).  I also used to camp in the area in the early 1970s when I was stationed in Rhode Island, and Cathy and I had many wonderful B&B experiences in the area while “booking” in Vermont and New Hampshire prior to our move here.

Continuing down Route 30, I was looking for the back road to Manchester that the locals use to avoid the “tourist” traffic in Manchester Center.  This is the road the Southern Vermont Art Center is located on, and I had never seen it.  I found the turn well marked, and enjoyed the road, its homes, and the art center on a high point of land.  This road ended exactly where I thought it would at the Equinox Hotel on Historic US Route 7A (there is a new super-slab from Bennington that bypasses Manchester and Arlington that is the “new” 7).  I turned north on 7A, and now will relate my thoughts and observations.

Based on my 50+ years of memory, Manchester Center has been ruined.  Yes, the economy has had an effect, in fact just on my drive over from home which I had not done in about 5 weeks I saw more for sale signs and retail vacancies – it is happening that fast.  But Manchester Center used to be a bucolic spot, and then the outlets came and built everywhere.  Yes, Cathy enjoyed the shopping there in the late 90s, but now it is vacancy after vacancy and the buildings are falling into disrepair.  I do not know the why, but areas do go in and out of fashion, and I believe the fellow I have been buying books from said there are more convenient outlets elsewhere.  I stopped at a few outlets (do you know how hard it can be to find a plain oxford short sleeve shirt?).  I did so on a TR3 trip last fall too, there were more shops and less vacancies then.  I have vowed not to do so again.

I really enjoy the area around Arlington (also with more changes since Cathy and I would visit) and Manchester, but the changes are sad.  At least there is not as much traffic, and (retailers I am sorry to say this) if your desire is to shop in Manchester Center – go elsewhere.

Well, so much for my rambles and thoughts and memories.  Have a nice weekend, yours, RAY

This entry was posted in Miscellaneous Musings and tagged Dorset, Manchester Center, outlet shopping, US Route 7, Vermont. Bookmark the permalink.