You may recall my Roycroft Arts and Crafts experience in Western New York in October 2014. One day we toured Frank Lloyd Wright architecture spots in Buffalo. I realized I had to get back to explore Buffalo, and that is what I did from 13 to 18 May. Now I can say that I need one or two more trips to experience more of the area. I did a great deal of planning, but it is never enough; and, you know I change my plans when stumbling into something of interest I did not know about. I drove out on Monday, and Tuesday began my explorations at the Theodore Roosevelt Inaugural National Historic Site. It was here that TR assumed the Presidency following McKinley’s death following being shot at the Pan-American Exposition on September 6, 1901.

The website is wonderful, do check it out. Below is the spot in the home where TR was sworn in. I have now been to two inauguration sites of Presidents succeeding a President dying in office.

TR wrote his first proclamation at this desk. 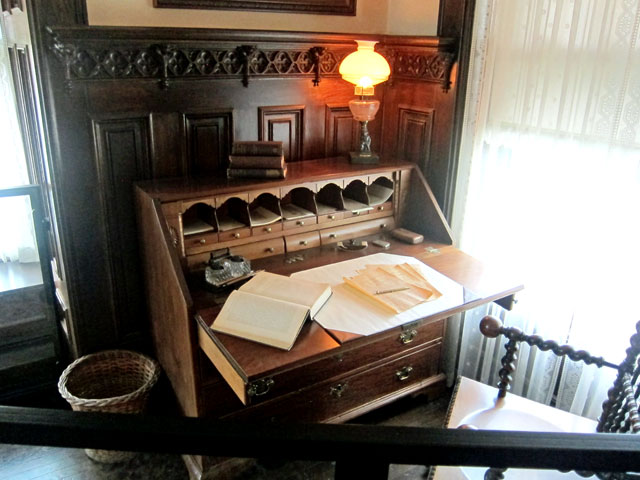 here are some interesting panels of history – you can click on them for larger images to read if you wish. 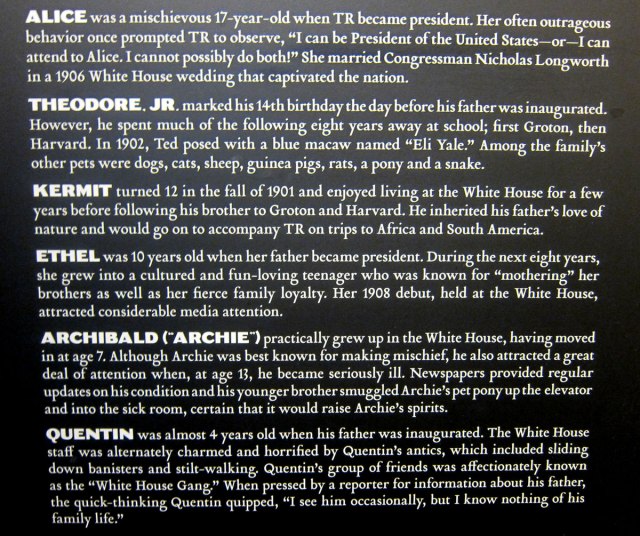 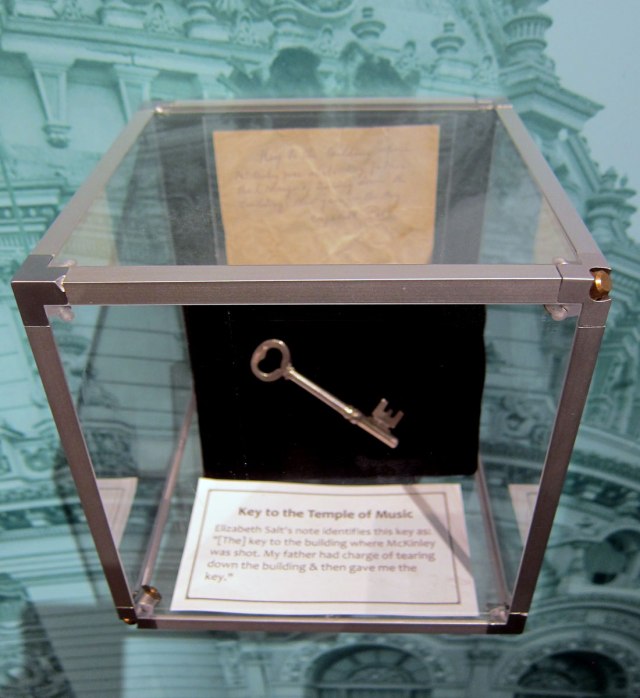 There are a number of interactive exhibits, including sitting at TR’s White House office. I dove into work, and made the news (you can enlarge it to read the story about me).

Did you know that I have been enthralled with World’s Fairs and Expositions for decades? It is true, and Buffalo has much to share of its past with the 1901 Pan-American Exposition. Downstairs there is an impressive fair exhibit.

some more panels of interest 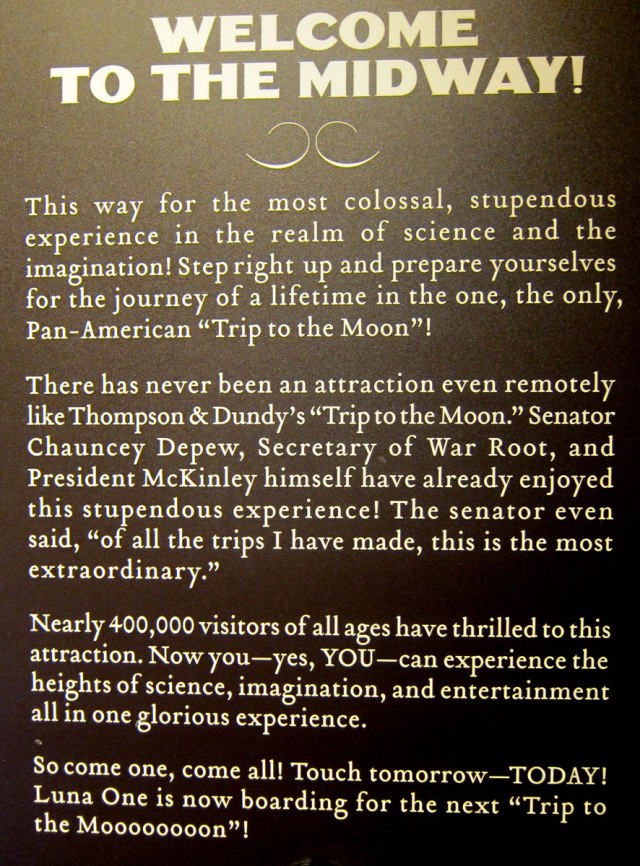 Thomas A. Edison was making movies (silent) in 1901, and documented many happenings at the fair. I bet they are on-line, but being shown here was the exciting trip of the LUNA ship to meeting the people on the moon.

It was then off to City Hall for the highly recommended noon tour.

This 32 story Art Deco edifice was completed in 1931 to serve a city of one million. Buffalo was exponentially growing following the completion of the Erie Canal followed by its development as a port with lake trade transferring to the railroads. Population reached 600,000, but today is but just over 260,000. The first floor is impressive with its ceilings, murals and these murals that have a semi-circular top – a separate name that I forget and cannot find.

On the tour you even see the mayor’s office. It is large, his desk is in the rear, and sometimes he even will greet visitors on the tour. My tour group was small. A man from Poland, another young European, and an Asian family. A popular thing to do in Buffalo. 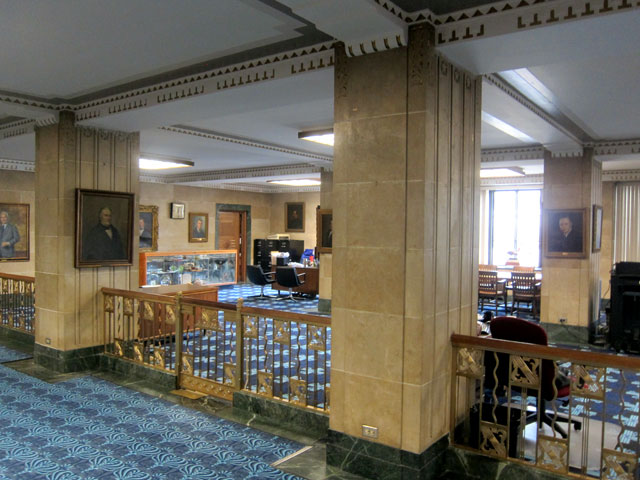 This stained glass ceiling in the council chamber is a masterpiece.

these are the seats in the council chamber. Recognize the wire frames, and their use? During renovations it was decided to keep these accouterments underneath the small seats (people were thinner then). 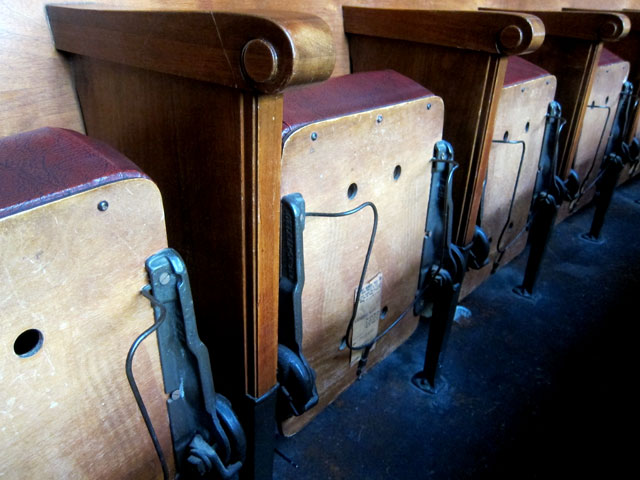 Remember? Probably not. Men (and women) always wore hats. And, you would slip the brim in the wire frame and put the seat down, thus holding your hat. Impressive are the views from the observation deck, below looking south to Lake Erie.

My great tour director, and the fellow from Poland told me of two architectural treasures I had to see that were in walking distance. First I headed over to the Guaranty Building, an early skyscraper completed in 1896 and designed by Louis Sullivan and Dankmar Adler.

It was then over to the Elliott Square Building completed in 1896. This historic office building is amazing with a great central court where I had lunch. Note the mezzanine retail spaces – sadly vacant.

this solid and still resident was at one time editor of the newspaper, The Buffalo Express, in 1869. He watched me eat.

an architectural gem, I have never seen elevator doors such as these, nor such a large and impressive mail box at the end of the mail chutes from above. 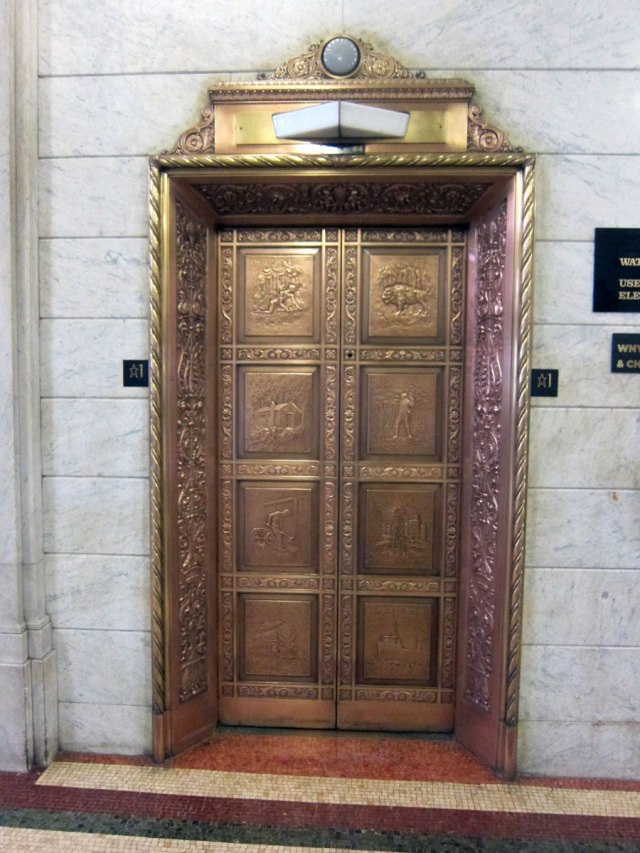 On my last trip, the Road Scholar bus drove past Canalside and the Buffalo & Erie County Naval & Military Park. I was shocked then what I saw, and made it back this time to visit one of the three ships – the USS SULLIVANS DD537.

I enlisted in the US Naval Reserve in high school to better my chances for acceptance into the NROTC program to cover college costs. It worked, but in 1963 I went to boot camp in Great Lakes, Illinois, and before starting college in 1964 I went on the SULLIVANS for a two week reserve cruise. The ship represented the US at the 100th anniversary celebration of the Confederation of Canada in Charlottetown, PEI.  And, I was part of the crew. Mentioning that when I went to pay for my ticket I was told, “no charge since you were a former crew member.” I did not say it was but two weeks. It was an amazing well laid out tour – here is a formidable view. 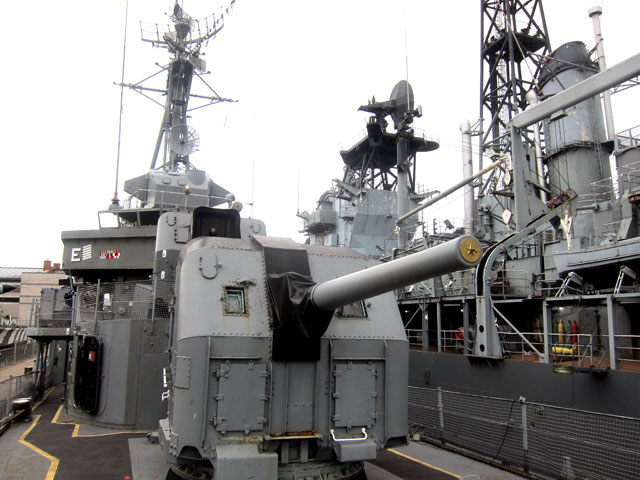 As I said, the self-guided tour is amazing. In the “gallery” below is my “rack” – my bunk at the bottom of a “ladder” (stairs to you landlubbers) – the worst spot given to a two week reservist, and the mess decks (dining room).

and, next is the entrance to the XO’s (Executive Officer) stateroom. Why show this do you ask? It is quite a story.

I was watching the celebration parade with Bob Eck (only time I have remembered a name). Started talking to two fellows next to us, and telling them I was headed to Northwestern to major in Radio, TV and Film (that major lasted one semester), they said they were actors/dancers in the Wayne and Schuster show, and would we like see the show that night – YES. After the show they took us to the big party for Prime Minister Lester Pearson. There we were, junior enlisted in uniform, being welcomed graciously by all the Canadians. The Commanding Officer of the ship saw us, and was amazed, and came over. The actors said to him, we are having another party later, can these two fellows come, and be back in the morning? You see, there was “Cinderella Liberty” and you had to be back by midnight. The CO (Commanding Officer) said, “yes, have fun,” impressed that we had been invited to this gala centennial event.

The next morning walking down the pier to the ship, everyone was watching us, and making cat calls. Crossing the Quarterdeck the OOD (Officer of the Deck) said, “you are AWOL, and in big trouble, wait here.” We were then escorted to the XO’s stateroom where he asked what we were doing. “The Commanding Officer said we could stay out,” I explained. “Right, I don’t believe that, wait here, I will go ask him.” We stood in that doorway, and when the XO returned he said, “next time the CO says you can stay out, call the ship and tell us, now get out of here.” I still have my program for the evening, signed by the Prime Minister and Wayne and Schuster. Now I have this story “in print.”

This placard on the SULLIVANS is the best explanation I have seen.

The plan for Wednesday the 15th was to start the day in Eden. Eden, New York, that is, to see a “first, and only one in the US and world” I had read about.  On the way I had to see the abandoned Buffalo Central Terminal – two miles out of the city.

An active station from 1929 to 1979, the 17-story Art Deco style station was built for the New York Central Railroad to handle over 200 trains and 10,000 passengers daily, as well as 1,500 New York Central employees.. About 2.5 miles from downtown, it was expected the city would soon reach the terminal – it never happened.

Buffalo Central Terminal when completed in 1929. 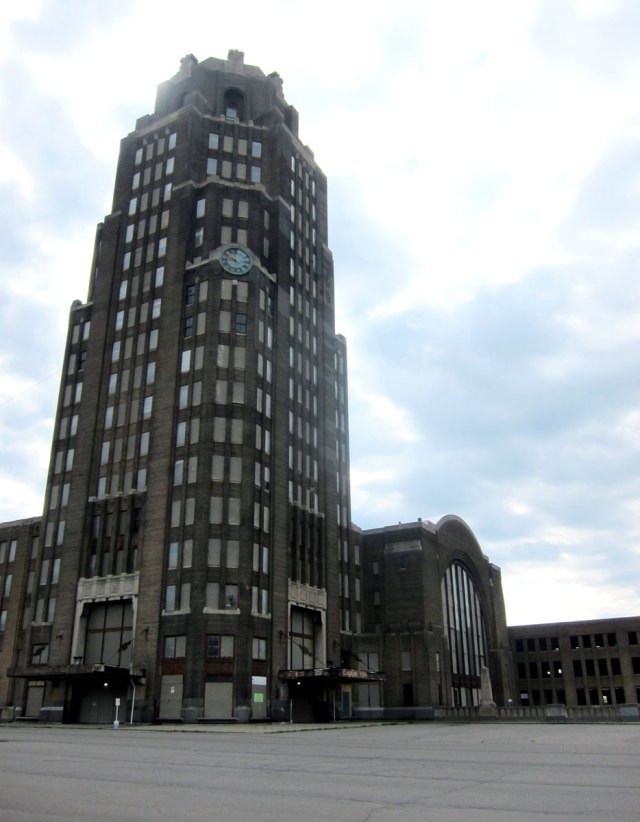 Looking back to downtown Buffalo that never made it to the terminal.

I then headed south for about 40 minutes for Eden, and, 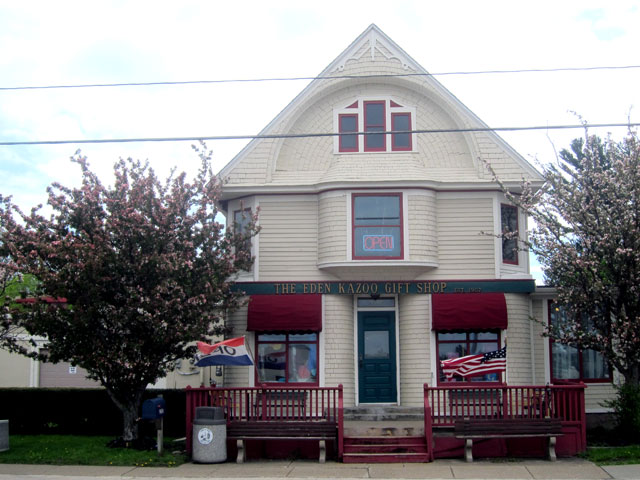 Beginning as a metal shop in 1907, the kazoo factory was established in 1916, and is the only original metal kazoo factory in the world. The original machines are still in place, still used, and driven by overhead belts.

changing ownership over the years, and with production down from millions to tens of thousands (what is wrong with people?), the original factory and working museum was donated to SASI, a non-profit dedicated to supporting individuals with developmental disabilities. I saw about 4 employees working away at a “perfect fit.”

there are 18 steps involved, believe it or not, to make a $3 basic kazoo.

I have stashed away about 20 images of all the placards of the steps. Telling friends about this discovery it was decided to form “the band.” So, another website will evolve, a marching unit, and the purchase of equipment I made was one of the largest there in a long time. Here are some of the historic items in display cases (remember to click to enlarge). 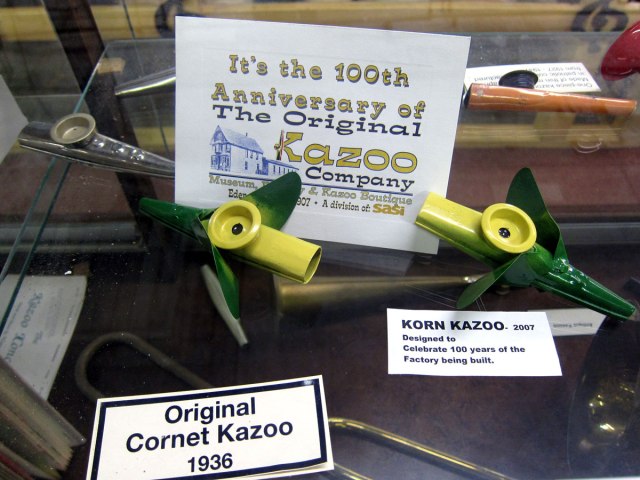 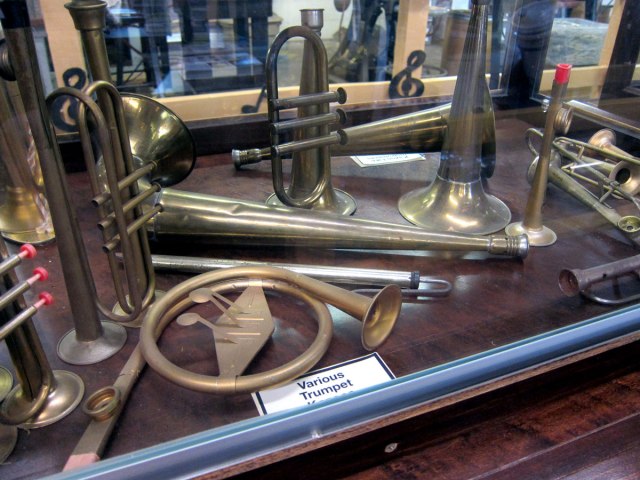 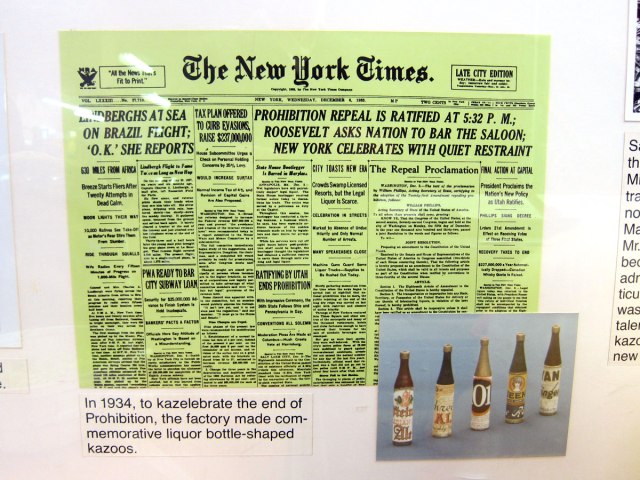 Of course, yesterday (22 May) while scouting books, I discovered in an antique shop a brass horn, labeled “child’s horn” – $5. No thought needed, ends up being an 1890s KOBO BRASS BAND INSTRUMENT invented by the kazoo inventor, and looking at my images above, I see one sitting upright in the middle row right image above. I found pages of history, and previous sales of over $100 for my rare piece. I am a good Googler.

Did I say Pan-American Exposition 1901? I was off to the location of the fair next, passing the abandoned steel plants, grain elevators, etc. on the way. On my last trip I got the bus driver to detour to the stone marking where the Temple of Music was, and where McKinley was shot. The “Rainbow City” showcased electricity from Niagara Falls on its 350 acres of former farm land to the north of the city, which is now a lovely residential area.

Stone marking site of the Temple of Music where President McKinley was shot. 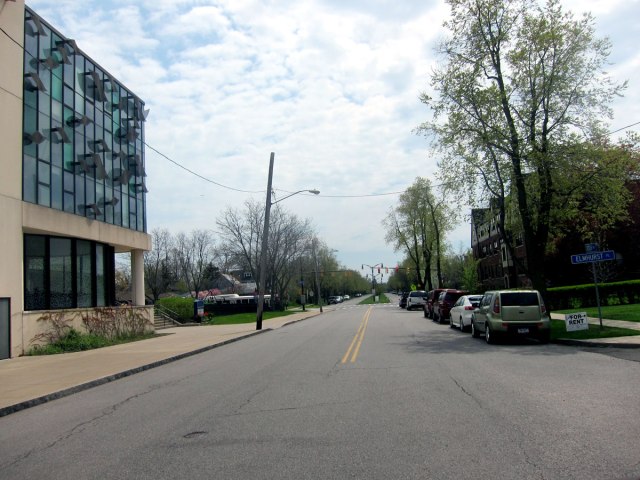 Looking from the spot of the Electric Tower looking south to the city.

Next I went to the Buffalo History Museum. The building was the only fair building built to permanently remain after the fair, and for use as the history museum.

the front of the building faced the lakes at the south of the fair – Delaware Park.

Looking across the lake you can see the Albright-Knox Art Gallery. It was to be open for fair as the Fine Arts Gallery, but a strike at the quarries delayed completion for a few years. I will have to spend time in the museum and adjoining Burchfield Penney Art Center on my next visit.

inside the central court of the Buffalo History Museum. During the exposition this was the New York State Building.

and, I wanted to share this view of the fair’s Triumphal Bridge, painted c1900 by F. Hopkinson Smith.

Hope you got this far. It has taken me over a week to get to document my first two days of this adventure, and I still have three more days to share with you. But I am getting there.