A 34 hour vacation that felt like a week when I arrived home – that much done and seen – and three things that had been “on the lists.” In fact, the Inn I stayed at Cathy and I talked about experiencing years ago, and ironically I drove by and took some pictures exactly 4 years ago, August 26, 2014. The experience for each day was on last year’s definite list, and rolled to this year’s definite list written back in May. We got the September CLARION done early and off Friday to the printer giving me a “window of opportunity.” I made two phone calls to verify schedules, then one call to book the Inn. And what followed was a great time to share with you here.

Lots of routes to get to the lake region, I considered several, considered taking BLUE BELLE, but for comfort sake decided to exercise GiGi some more. Here is the route I will be taking you along. Yes, you can click on it for a larger size.

Leaving Claremont I headed to New London, then headed east on Route 11. Turning left on Route 4 towards Danbury, and then a right on Route 104 to Meredith. I recommend this route. On Monday coming home, I took Route 3 from from Weirs Beach back to Franklin and Route 11. But there is way to much traffic and commercialism on that route – not a BB2 route. Redeeming factor, on this route home, was a purchase in a Laconia antique center of two books, which once sold will pay for almost 1/3 of this holiday.

A fascinating stop is Bristol on Route 104. Some interesting shops and eateries in this architecturally interesting mill town. I left a so-so antique shop, and walked the opposite way to see the river, and there in the shop’s window that I did not see was this:

This suitcase owned by a Bostonian resident is full of ocean liner stickers. Note the exceptional “character” of this piece, including the replacement twine handle. I have been watching these since Gary maybe wanted one for his Tiki Bar decor. Saw one in Connecticut last month (not as nice) for $275. I felt guilty (not) having to pay $40.50 for this treasure. I may loan it to Gary.

I then arrived in Meredith with my respectable hour to spare to catch the Winnipesaukee Scenic Railroad – run by the HoBo Railroad in Lincoln. I wanted the full round trip from Meredith through Weirs Beach to Lakeport and return. I bought my ticket, included a “Hobo Picnic” and ventured down Main Street to see the craft fair. For over 40 years I thought Meredith was the strip along the lake – Route 3. I found out Main Street is one or two blocks back from the lake – architecturally pleasing with shops, eateries, and today the street fair. 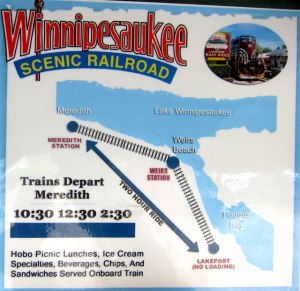 But it was time to get back to not miss the train.  The station/ticket master asked if I knew the derivation of the term HoBo. “Well, I should,” I replied, but with all my reading on trains, I do not. You probably know that particularly during the Great Depression, many unemployed traveled the rails (without paying) looking for work, or just for something to do. Many actually desirous of work would carry their own tools, thus improving their chances for that job or meal. Agricultural work was most often offered, and offered to those carrying hoes, ready to work the field. Those boys carrying hoes became know as HoBos — you needed to know this. And, right on time, the train arrived from its first run.

I started off in this car

and, some views of the cars

and, some views along the rails on my trek (and remember, you can click and open my galleries for larger views).

Arriving at Weirs Beach along with the MS Mount Washington

Looking back at Weirs Beach upon departure

Two things of interest – everyone waves as a train passes, and those waves are returned. I saw the same happen the next day as the MS Mount Washington met smaller craft on the lake. And, everyone in the lake side communities and developments appeared to have golf carts to get the the lake shore — they were parked everywhere.

When my “ride on the rails” was completed I headed north on Route 3 to Plymouth passing a campground I took the boys to in the early 1970s. Heading west on Route 25 from Plymouth, then south on 3A and along the east side of Newfound Lake. Getting there before 5 PM, I spent (other than dinner inside) about 5 hours on the porch. Did not get to take an image of the The Inn on Newfound Lake until dark.

Porch, yes the porch overlooking the lake. Here is where I planted myself.

and some views around the Inn. 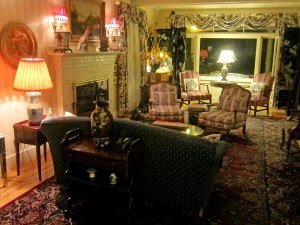 I must tell you, the owners love Rabbits — in one form or another (even the key fob) are everywhere. And, the restaurant is wonderful. Locals trickled in all night, the Inn is popular for wedding parties — but well worth a stay to experience.

Looking out at the lake over my soup

Monday’s plan was to take a cruise on the MS Mount Washington on Lake Winnipesaukee. I could have done a one day combination of rail and sail, but then the temptation would have been to drive home. Instead I choose to separate the rail and sail with an overnight. At the continental breakfast I visited with a few couples staying at the Inn. I had thought, and then discarded, touring around Newfound Lake on the way to Weirs Beach. One woman, whose family had over a 100 year history on the lake, convinced me I should take the drive.

So heading back north on 3A, a left toward Hebron, to get West Shore drive. Hebron is a perfect New England Village.

This is half of the bucolic green.

And, this sign on the porch of the Country Store – I want one.

Looping back to Bristol, then Route 104 east to Route 3, and south to Weirs Beach, I arrived. I have visited Weirs Beach for over four decades, and it has not changed. It is the perfect early 20th century lake side honky-tonk with games, gift shops, and food establishments, not to mention 19th cottages and architecture. This view is looking south from the footbridge over the railroad tracks. 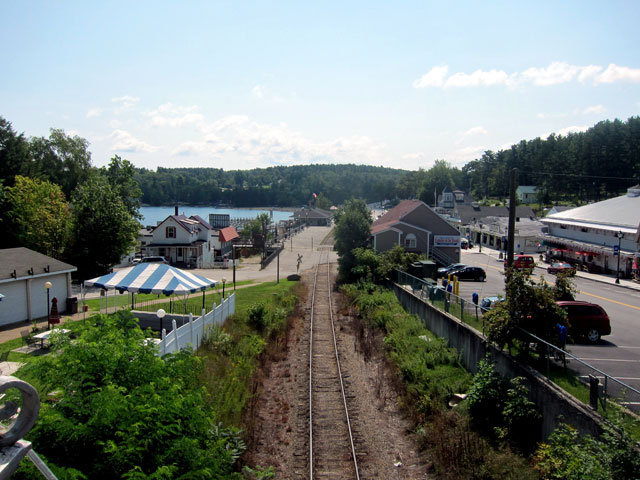 and, a galley of views around town 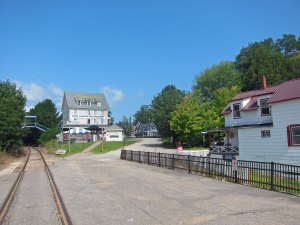 Looking north – to the right is a neighborhood of 19th century summer cottages.

Looking at “downtown” from the water 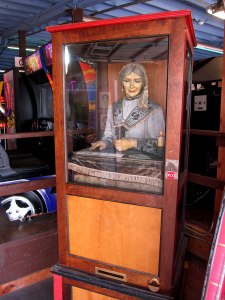 One classic arcade machine in the gaming arcade

The machines have changed, and I forgot to look for the Skee-Ball machines I played with the boys, getting tickets, then prizes.

I then headed over to wait for the cruise on the MS Mount Washington. 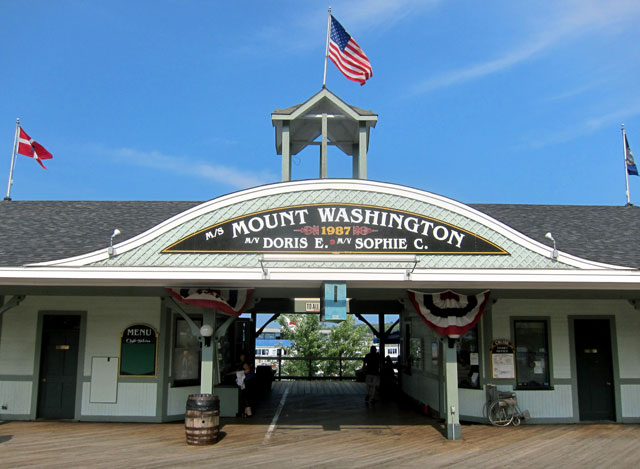 while there, the train was returning from Lakeport heading to Meredith

and, then the majestic MS Mount Washington was coming into view 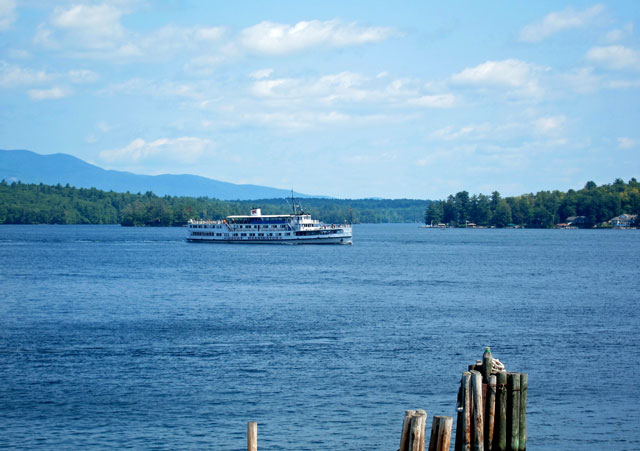 it was time to board 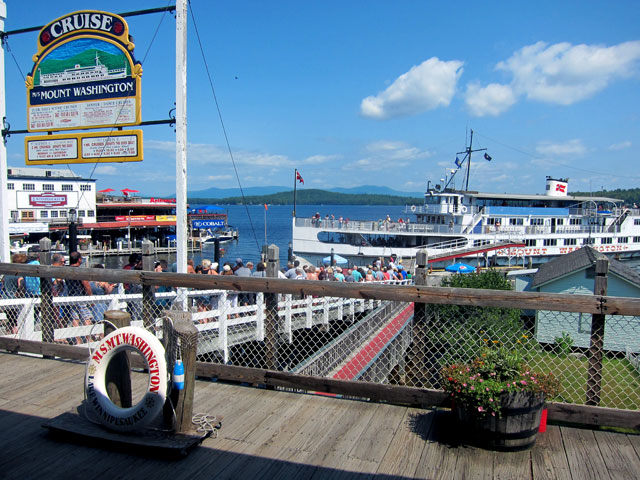 checking out the wheelhouse, I approved. 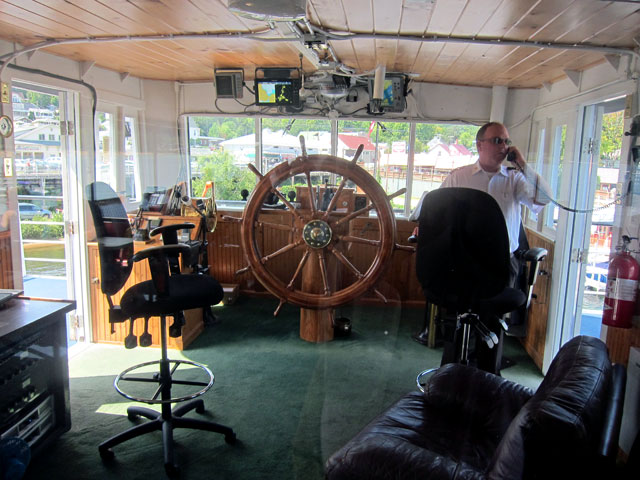 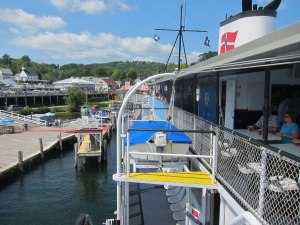 Pulling away from the pier 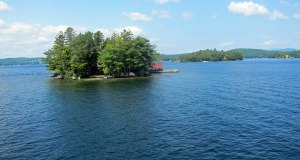 Everyone has always wanted his or her own island. 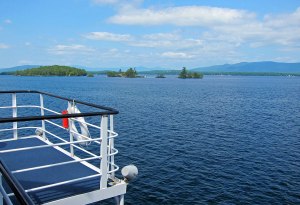 More to choose from

Our first, albeit short, stop was Center Harbor

And, a close-up. On the marine railway is currently the original mail-boat undergoing some repairs. This is where the MS Mount Washington is pulled up for the winter. Notice Tom on the pier tying up the ship. Tom was at Weirs Beach, now Center Harbor, and then met us at Meredith before we again saw him upon docking in Weirs Beach. I told him, “I hope they are paying your mileage and speeding tickets.”  Too much fun. 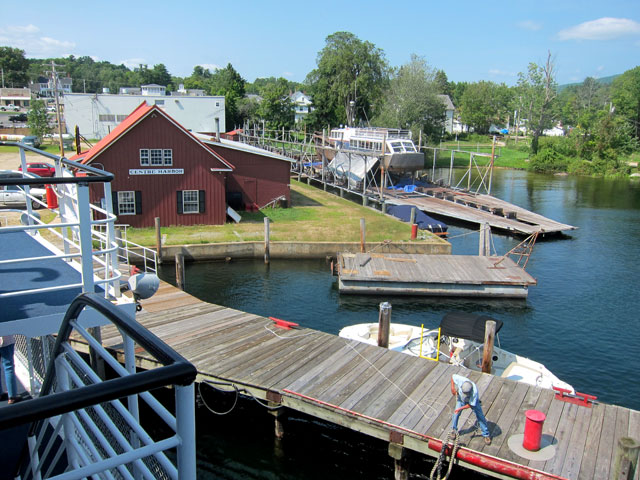 And, then pulling into Meredith. Remember, this is what you see traveling through. As I mentioned before, Main Street is just up the hill.

and, back to Weirs Beach, and my favorite buildings there. Built for Civil War veterans for their post war encampments. Just beautiful.

1 – Even a 34 hour vacation can work wonders
2 – Take the Winnipesaukee Scenic Railroad
3 – Plan a cruise on the MS Mount Washington
4 – Look into Center Harbor — I have already started my research and found a B&B to center my further explorations from
5 – And, finally, relax and enjoy – LIFE IS TOO SHORT