Have you noticed that recently I seldom get to complete my posts while on my adventures as I used to? Some of my recent experiences have continued well into the evening hours impinging on my sitting down with wine and words. Hoping to put everything together when I get home, I still am too busy. I have been home from Fall River, Massachusetts for nine days, and finally started putting together a three day tale. But, working with my images, I realized I should separate out this adventure to 230 2nd Street in Fall River – my B&B for two nights. The trip there and back will come later on.

My infamous bedroom is on the second floor above – the left two windows. Do you remember what happened here August 4, 1892? Maybe this will help —

Although the child’s skipping rope rhyme is not historically accurate (there were about 19 blows to Abby, her step-mother, and 17 to Andrew) you know where I was. And I had the room where Abby was whacked. Most expensive B&B room I have had, but (remember this) in checking out I saw a small sign “Show your AAA card for discount.” I saved $50! And, now I can share the story about this crime that still fascinates after 125 years, partly because Victorian women were thought not capable of such an act, this was the first nationally publicized crime and first carried by the new wire services. And, the first time actual crime scene photos were used in court in the US, and only the second time ever used in court (four years prior crime photos were used in England in the Jack the Ripper case).

Check in is after 4PM since there are one-hour tours during the day (when did you last sleep in a museum?). Did not have to go on one because guests receive a tour from 8PM until 10:30 or 11. I had to do “all things Lizzie,” so off I went after checking in to the massive Oak Grove Cemetery. Borden is a large family in Fall River, but here is Andrew’s marker.

and, after her trial, Lizzie decided she would be Lizbeth

Once acquitted, Lizzie purchased a house up on the hill where the wealthy, well-heeled residents resided. Her father could have easily bought there, but was frugal to a fault. 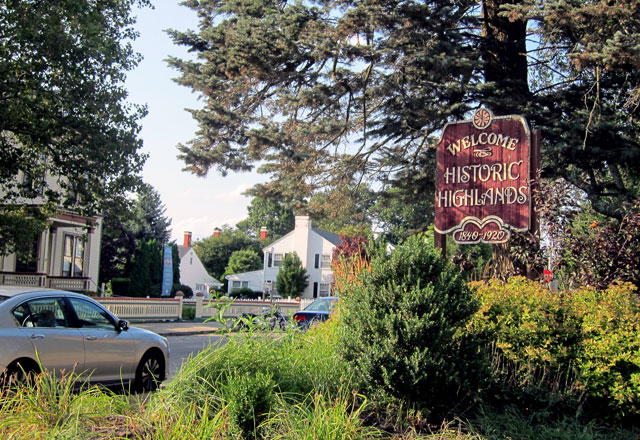 and the house that Lizzie renovated naming it Maplecroft, where she entertained and lived until her death in 1927. The current owner is hoping to open it as a B&B. 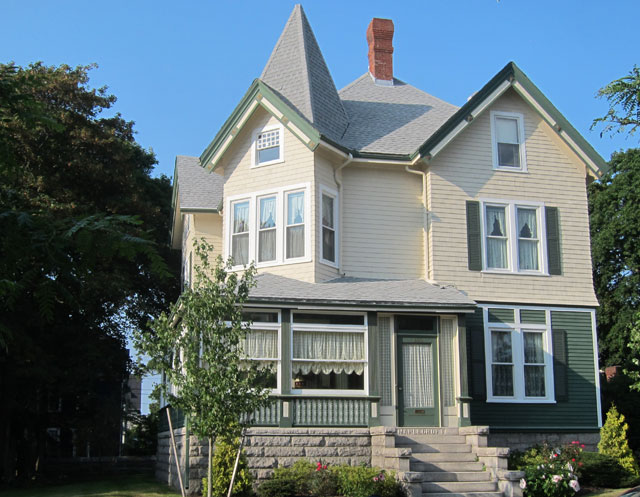 I really do not think I need to relate the Lizzie Borden story in detail because you probably know something, or can easily research (as I did for background prior to going – including watching the Elizabeth Montgomery movie on YouTube.) You just want to see her home which the current owners spent over $500,000 bringing it back to its 1892 appearance – thanks to all those crime photos.

Below is heading up the stairs to my room, and the view from the seventh step.

and, entering my bedroom, and looking over my bed

here is THE SPOT

Abby’s body had to be moved some for the crime photos. It would have been inappropriate for any of her legs to show, thus in pulling down her dress she appears to be propped at an angle – not so. You will want to open this gallery of images for sure to see the larger images. 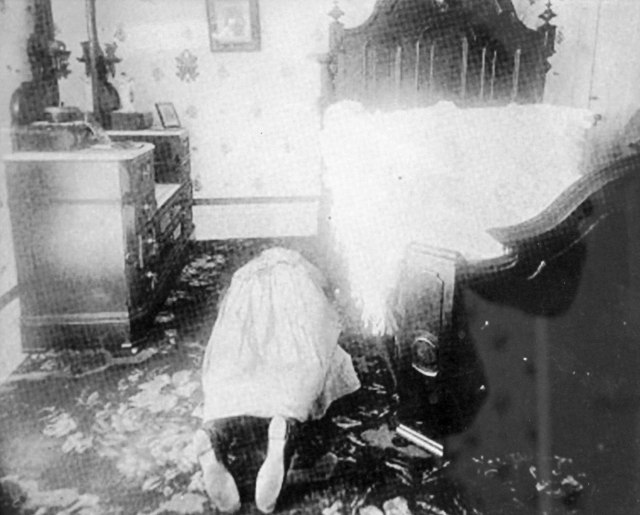 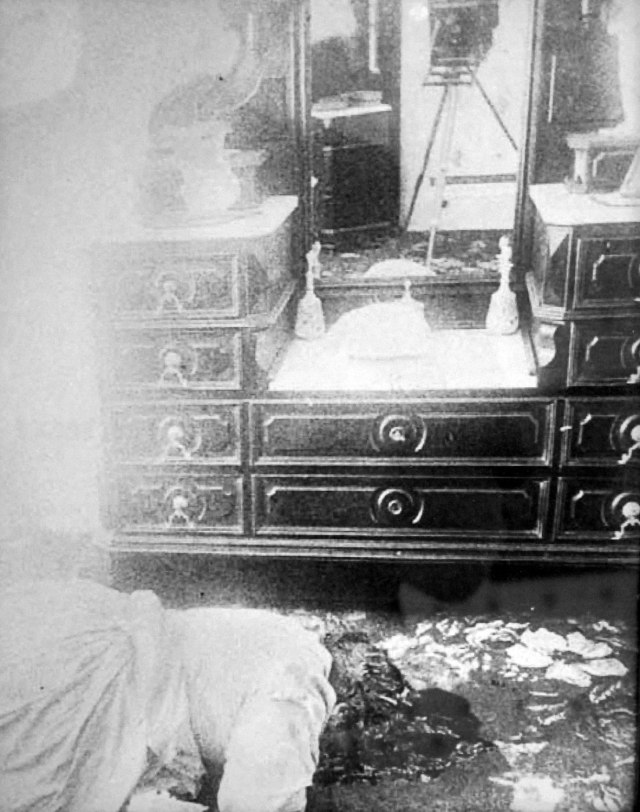 Dresser in room now is almost a perfect match except for lower drawers. 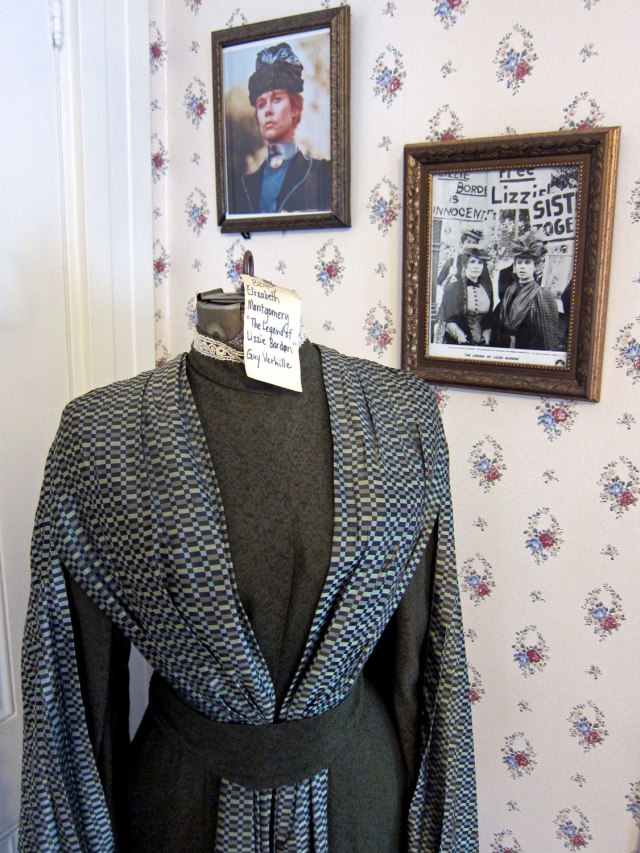 Dress in my room that Elizabeth Montgomery wore in the made for TV movie.

Looking back from the dresser to the hallway

My first evening I had a wonderful dinner at the Abbey Grill , ironically in the old church Lizzie attended and where she taught Sunday school. It was great. Getting back for the 8PM tour I joined six other guests. Rich, our guide for the night, gave an in depth architectural, and history tour of the property and the events. Here are a couple images during the tour. First, up the front stairs with my room was Lizzie’s room that she traded for with her sister following returning from a tour in Europe with oodles of souvenirs, 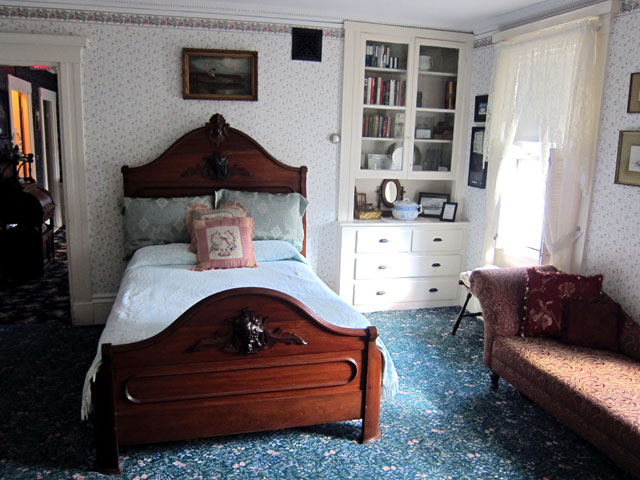 See the door to the left? Originally a two family home, Andrew did not make too many changes. He and his wife used the back stairs to the two rooms in the rear, and this door was kept shut with the bed at an angle in front. The girls then using the front stairs (viewed earlier) to their rooms (second bedroom off the one above to the left) and the guest room in the front. 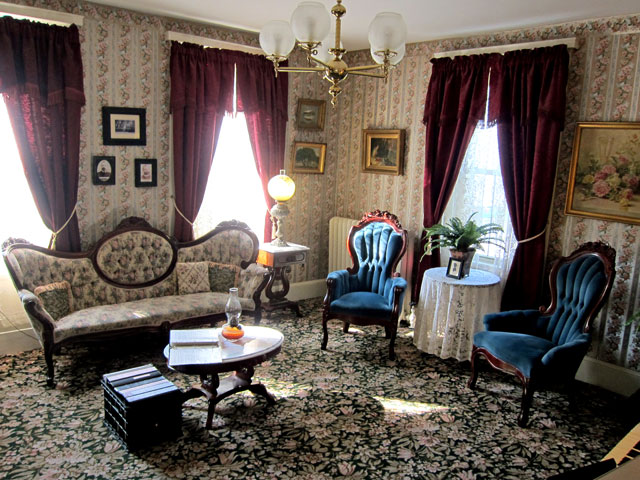 And, the dining room which was two bedrooms when the home was a two family. Our host for the evening has arms extended. 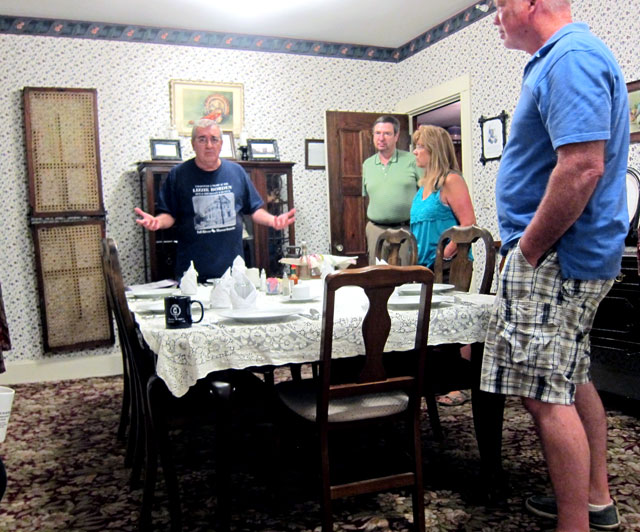 Did you note the contraption hanging on the wall to the left? That folding framework with caning was used when laying out a body for autopsies, or wakes in a dining room. Instead of being laid directly on the dining room table, a body was placed on the frame, thus bodily fluids drain off. The second night one of the guests was a young mortician — was she full of stories, loving her work and its history.

Upstairs on the third floor was the maid’s room and another guest room at the time of the murders. Bridget Sullivan was called Maggie by Lizzie and her sister, the name of the former maid. The new owners have added two additional bedrooms on the third floor in what was storage.

Thursday I did other things that I will report to you in the next post, but I ended the day at the Fall River Historical Society. A wonderful old home, but the “hook” that got me there was one of the things my guide, Rich, had said the night before. With Lizzie acquitted, all the evidence of the trial was given back to her lawyer, Andrew Jackson Jennings. He took the evidence home and stored it in a hip-tub in his attic. The collection is known as the “hip-bath” collection. In 1967, Jennings’ daughter donated the items to The Fall River Historical Society. The items were put on display finally in 2010 in the room shown below.

Hard to see because of the glare, here is some of that evidence including the infamous broken hatchet found hidden in the basement. Even with the glare, I bet you cannot resist opening up this gallery for larger images. 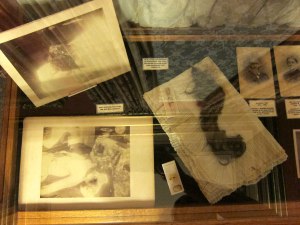 I read a great deal, viewed videos on Youtube, listened to Rich the first night, and also the other guests who had ideas. My tour hostess for the second night I was there had more of an interest in the paranormal which this Borden home is also noted for. Along with that evening’s 8 guests I gained even more insight. So, I have my theory, and can happily entertain you with the details, but basically I believe the only victim was to be Abby, whacked by Lizzie’s uncle (fantastic alibi). Sadly, Lizzie’s Dad came home 1 1/2 hours early, and not sure what to do, I think Lizzie whacked him. She then lived strangely ever after.

And, one last image — the end of night one, guests helped pose me correctly as Andrew. THE END 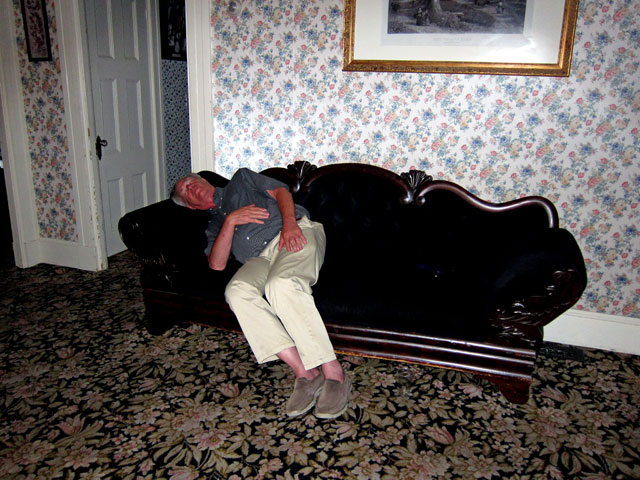