Today was BLUE BELLE’s turn, and now with over 600 miles on her rebuilt power plant she is due for a checkup and tightening. Again using Joseph C. Nelson’s  SPANNING TIME: VERMONT’S COVERED BRIDGES – today was Tour 13 – THE WINDSOR AREA. Now that I have travelled this — you do not have to, nothing overwhelming like yesterday’s Green River Village, but I am glad that I did the route seeing some new territory – “my thing”. Several of these bridges are just off the main road (but out of sight). Well, in Vermont and New Hampshire main road is a relative term (state route number, paved, two lanes – state numbered being the key). I will mention those you can see without effort if you find yourself if this area. Tour 13 has eight bridges, but two on private property (and small reconstructions) I did not find, but I added two New Hampshire spans to round out eight for you.

West of US Route 5 and I-91 on Route 11 heading to Springfield you will see a small state history site with the Eureka one room school house and the Baltimore Bridge, built in 1870 but moved here and restored by Milton S. Grafton 1969-1970 (you need to get his book too – THE LAST OF THE COVERED BRIDGE BUILDERS. 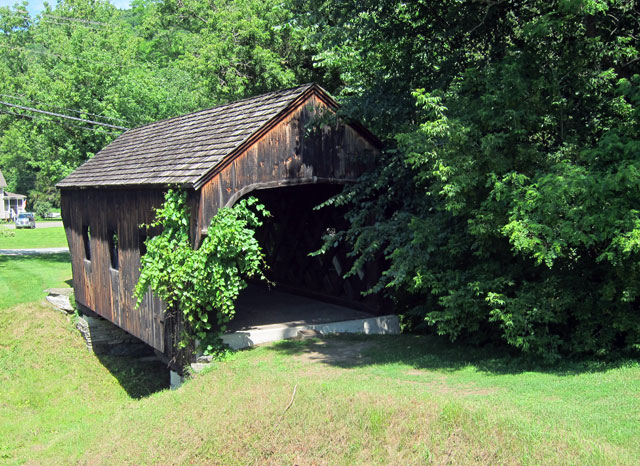 Forty-five feet long, I am going to let you learn all about the various structure systems on your own, but this is a plank lattice truss.

It was then up Route 106 (past the Inn at Weathersfield) to the junction with Route 131 at Downers Four Corners. Left on 131, short distance, left turn onto dirt – Upper Falls Road – and short distance down the hill to Downers Bridge, built about 1840 spanning high above the Black River for 121 feet. The stone abutment is most impressive of old dry wall construction – the other side has been cased in cement. the bridge appears to have been raised a tad during renovations (you can see the extra supports)

all the rivers (including the Connecticut River) were terribly unusually muddy as a result of the downpours yesterday. 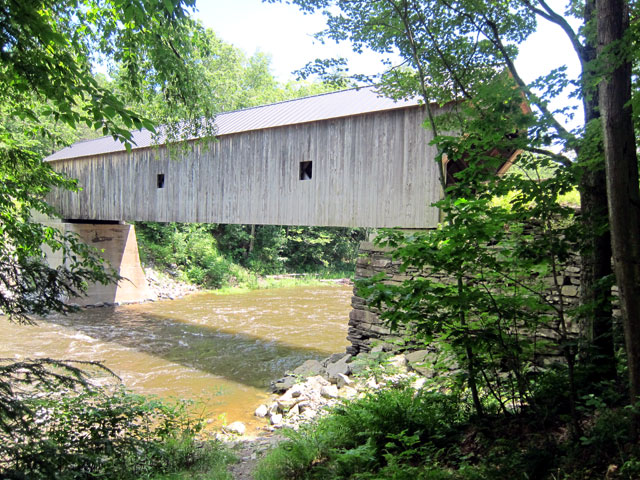 and a few views out the windows on the bridge 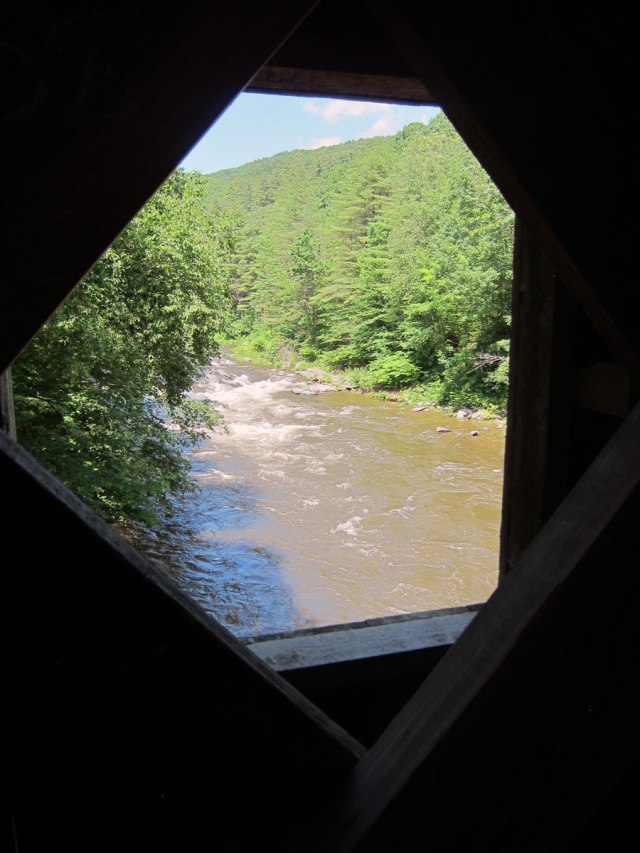 Having seen a sign for Upper Falls Road as I headed up 106, I continued on that great dirt road (following a grader for awhile) looping back to 106, then turning back north – recommend you take the route. Then east on Route 131 at the four corners looking for Henry Gould Road. Easy to miss, barely passable loop road, and the bridge a stone’s throw hidden from passersby on 131. 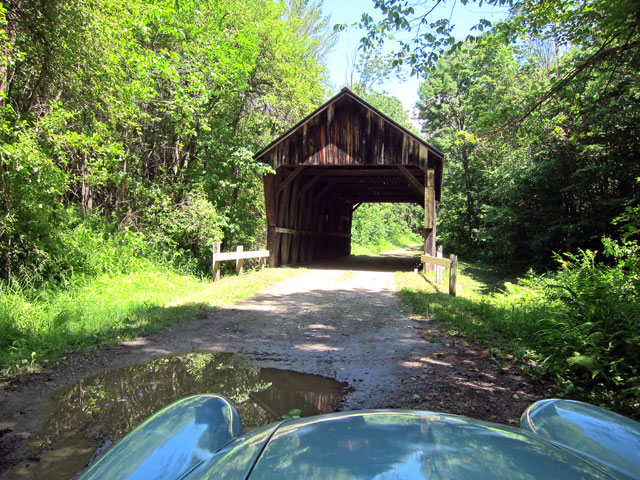 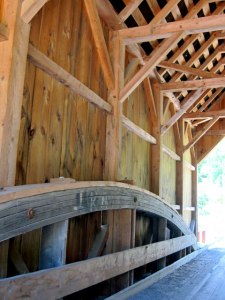 Interesting interior construction (first of two seen today). Used for awhile as a town storage shed, the bridge was restored and moved to this site in 1986.

Back to Downers Four Corners, and a pulled pork sandwich at Villagers.

Back north on Route 106 towards Felchville, but I somehow missed Churchill Road to the next bridge. No problem, right turn on Route 44, and right onto the northern terminus of Churchill Road, where (as described by Nelson) “Bests Bridge stands hidden in a cluster of buildings.”

I continued east on Route 44 to Brownsville looking for the next bridge on Bible Hill Road. Brownsville is worth a visit, sure I have driven through before, but did not remember. Also found I had missed Bible Hill Road, so I headed back west finding it heading north to Bowers Bridge of forty-five feet spanning Mill Brook and built in the early 1900s.

again the interesting support, and obviously recent renovations to the exterior – the purpose of which is to protect the wooden bridge and it supports and road bed (now you know why they are covered).

Instead of turning around I assumed (I am good with sensing directions and spacial relationships) that if I headed up Bible Hill Road and eventually took a right that I would end up back in Brownsville.  Take this road — WOW the homes (newer) and views back to Mt. Ascutney, amazing. Here is a panorama I stitched — do open it up for full screen impact.

I continued west on Route 44 to Windsor, turned north on US Route 5. Just after you cross over I-91 at Exit 9 is Martinsville Road to the right. Not a thriving neighborhood. Deteriorated homes with probably more furniture in the yards than in the houses. Road (dirt of course) got smaller, heading down hill. Roar of the river and falls (this was an early industrial area) and there was Martin’s Mill Bridge.

once BB2 and I passed through and looked back I realized that traffic was speeding by on I-91 high above the tree line to the left of this image. 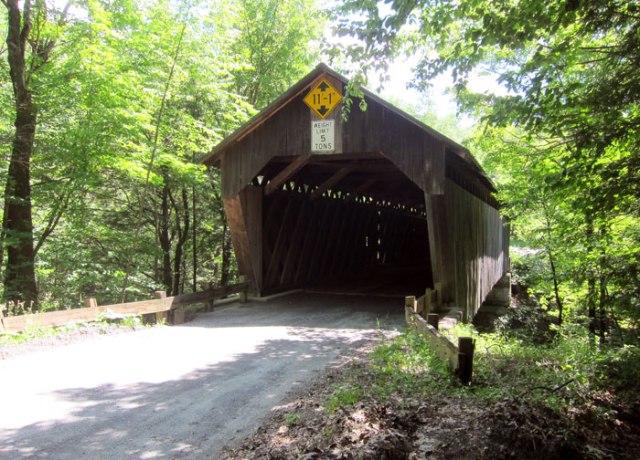 and looking at both ends of the bridge, the shed appears to be canting. Only sharing this one end with you — any idea why?

My plan was to end up at the St. Gauden’s concert which started at 2PM – it was well after 3 now, but I went anyway. Of course, I had to cross the Connecticut River on the Cornish-Windsor Covered Bridge, the longest covered bridge in the US, and the longest two lane span in the world. 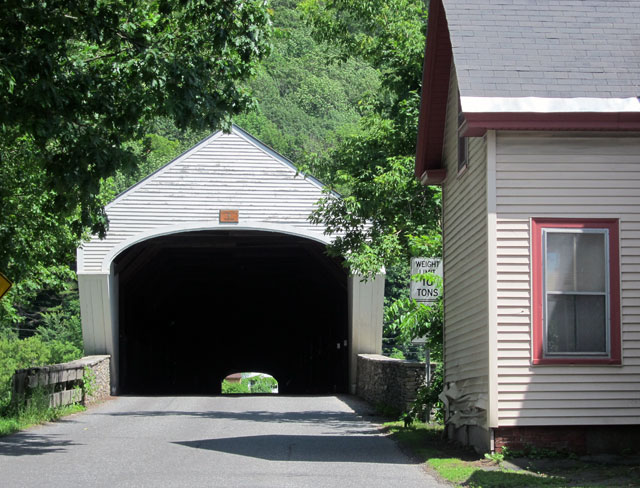 I pulled into the field, many cars, but not many people on the grass for the concert. I sort of lost interest just ready and wanting to go home. But on the way down NH Route 12A I turned off at a corner to add this bridge to today’s collection of images.

and, another interesting internal structure.

Back 12A to Claremont, Route 12 then home, but stopping in Charlestown for a fantastic ice cream cone. Last visited there with BB2 when she first came to live with me — we will go back.

Hard to believe today, July 3, is not a holiday — it feels that way, even with simply entertaining myself. I listened to the concert on the common at my front door last night, visited with a few friends. Was invited to an event tonight on a lake, but sadly declined because I just want to “veg out” and get rejuvenated for Plymouth Notch tomorrow. You will get that report too.

Thank you for traveling with me, yours, RAY

“To write about something is to live it twice.”

This entry was posted in Day (or maybe two) Trips, ROADS and ROUTES and tagged Vermont Covered Bridges. Bookmark the permalink.