This is not the conclusion of “Everything Dutch in the Hudson Valley” – I know that. But this will be a brief encouragement for some nearby explorations you need to do very soon. Scott and Betty arrived with their Airstream on Monday afternoon on their way to Maine. We planned a full day of play and exploration on Tuesday before they left today, Wednesday. Shortly after arrival on Monday Betty said, “I need to accomplish some sight seeing today in NH.”  Well, you see, they had to sleep in the Airstream even at my house, because they had not slept in it in NH, and now have just about done so in all states. Part of her “check-off” is to actually play tourist. Her desire – visit the old Steamtown yards since they live just about one hour south of Steamtown’s new Scranton home. The yards here are now the home of the Green Mountain Railroad.

I believe I am going to become a professional tour guide. Having just completed my Horse Thieves lecture on “The Development of a Village;” and, my Saturday tour for Louisa May Alcott aficionados around Alcott associated spots in town, I was motivated, and animated to tour my dear friends, and impressed myself with the knowledge I was able to impart. But we have explored before together, and learning one thing leads to at least two more questions to answer (and those answers usually begat more questions). It does not end.

We explored the yard in North Walpole examining the round table and rolling stock. I explained were the tracks came from and went. We looked at the old stone bridge, and then I needed to also show them the old yard in Rockingham, north of Bellows Falls. But on the way, we toured the “island,” and its rail facilities, old factories, and the Indian Petroglyphs. Heading back to the Village Square I proclaimed, “I need to show you the railroad tunnel under the village.” So I turned left down the alleyway, which I had only walked down a few dozen feet before. There were the tracks, the tunnel to the left, and I continued down the road to: 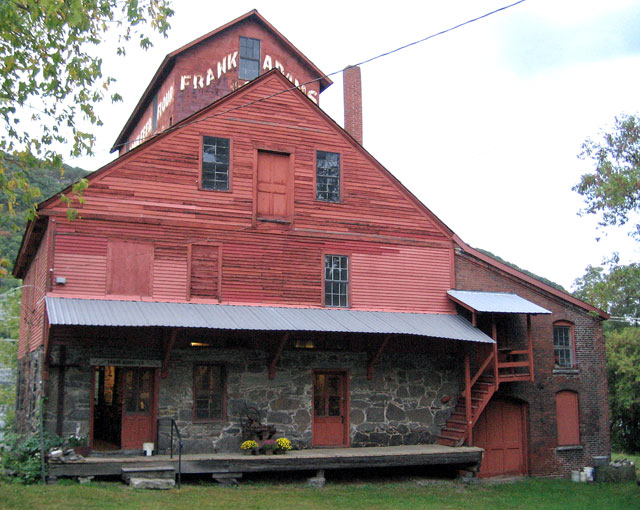 The door was open – on a Monday evening – we have done this before elsewhere, we just went in. “Bound to be someone inside I know,” I said, and yes, Chris said, “hi Ray, and welcome.”  My first visit ever, and to be repeated. Built in 1831, converted to electricity in the 1920s, and operated until 1961, the equipment is amazing, complete, and we all bet you could just turn the power back on and grind away. Here is a sample of the inside you have to explore:

A sample of the amazing machinery. 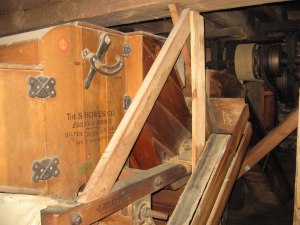 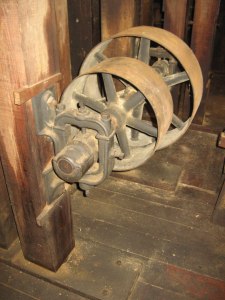 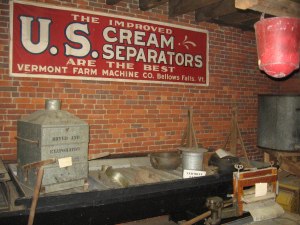 Much farm equipment was manufactured in Bellows Falls, and the museum has examples

And some farm tools, etc.

Remember you can click on any image to open larger size images.

Chris before one of the original Steamtown signs

We departed, leaving a nice donation for the museum. I also asked Chris if we could meet sometime to develop an article for my Walpole Clarion readers, and we are going to do that.

Tuesday, our plan was to head to Historic Deerfield in Massachusetts, less than an hour away. I first drove through Deerfield in the pouring rain in the summer of 1963 in Belzebuth, my 1929 Model A Ford Roadster. Since living here, I drive through many times a year stopping at the giftshop/book store, and to have lunch or dinner at Champney’s Restaurant & Tavern. BUT – for some reason I have never toured the homes and museum buildings. It was “meant to be” to share with Scott and Betty.

The view as you enter Old Main Street from the south. I always enter this way because I first did in 1963.

We bought our tickets at the Visitor Center — $14 – a tremendous bargain — and were given an introduction to the day’s events. Four homes were open for guided tours, and others for self-guided tours to see the homes or collections inside. Our timing was perfect to start with the Frary House at 11AM.

Built c1750, Miss C. Alice Baker began restoration in the 1890s in the Colonial Revival style. She was an early saver of the village, and was instrumental also in the Arts and Crafts movement with cottage industries that developed here making items for tourists, developing the tourist trade early on. The guided tours of this home and two of the three others were absolutely fantastic with exceptional well-informed docents. The tours are planned to last about 35 minutes, but we were fortunate. We spent 45-50 minutes here (with two other guests), but (more later on these) at the Ashley House and later at Wells Thorn House we spent over an hour – ending only because the next tour was to start. We were alone on those tours, and the paid docents could tell we were knowledge thirsty, and knowledgeable visitors.  It makes a difference, as Scott and Betty can attest having now served two stints as National Park Service volunteer guides. We headed north up Old Main Street to the Williams House for the noon tour. Docent not the best, we had 11 people total on the tour, but glad we at least saw the house. Finishing up, we crossed the street to the Ashley House for the 1PM tour. 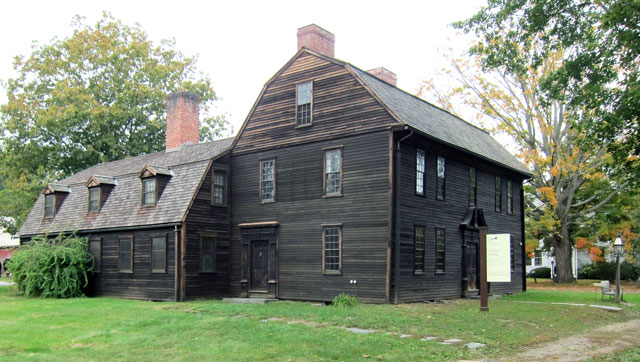 The docent met us outside and began visiting – it was only the 3 of us entranced and learning. He started with the geology and Native American background of the area. Old Deerfield is on a small extremely fertile plateau surrounded to the south, west and east by plains prone to flooding. Flooding resulting from the Deerfield River (to the west) which flows north from the west to empty into the Connecticut River in Greenfield. During freshets, the water flowing south down the Connecticut battles up against the water attempting to empty into it from the Deerfield River. The resulting flooding over millennium depositing exceptional soil and Native American settlements long before English settlers came in 1669. And, then there was the 1704 massacre and subsequent abandonments, but those are stories for you to find out on your own. For the next hour, we knew we were getting an exceptional insight into history, and answers to the questions we posed. And, always wondering why Old Deerfield was what I thought was a loop road off the newer US Route 5, I now know it was the fertile plateau and surrounding lowlands that cause the original road to curve in and out as it does.  I love learning why something is the way it is. Before I head to the last house, here is a gallery of images for you, and you can click any to get to the larger images. 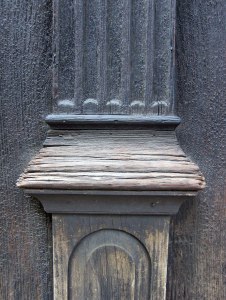 NEVER have I seen a stove like this. Small firebox in front, you can see oven door on the right, and a revolving top with removable lids to allow pots to be placed in. AMAZING

One of the private homes. Style such as my home – but I have to learn why I often see doors on the sides of a four over four. 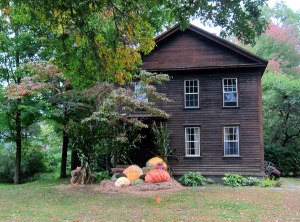 I have seen this display many times over the years. 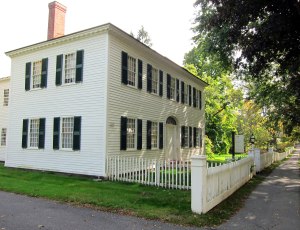 The Williams House we also toured.

At 3PM we arrived at the Wells Thorn House for a “walk through time.” 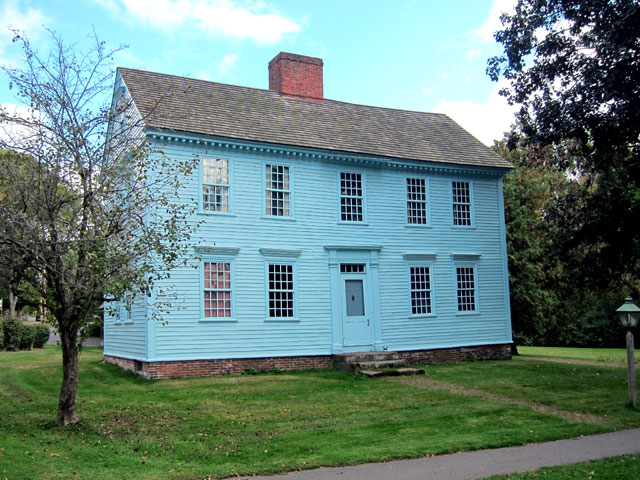 Wells-Thorn House at Historic Deerfield. Painted blue by the original owner, a lawyer, so everyone knew where he lived.

The rooms are set up to show a progression of furnishings from 1725 to the 1850s. Nicely done. At the conclusion, when chatting with our docent, he asked where we were from. For some reason, for the first time today, I mentioned the town too, and that opened up a whole new line of conversation. Ends up he plays in a band in front of my house each summer, and then he added, “I worked for the Green Mountain Railroad.”  Well, we bombarded him with questions left over from the previous day’s explorations. And we now have the answers.

But, at 4PM we were “housed out.” We had only gotten into one of the house exhibitions – the furniture. So, I have at least two more trips back to see everything else. We headed out, stopping in front of one more private house. 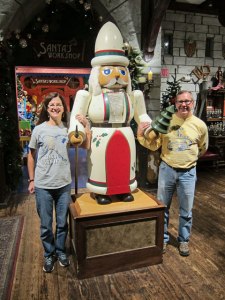 I suggested we head a tad south to Yankee Candle’s flagship store, and Betty said, “you have always told us we had to see that, let’s go.” Scott chimed in, “oh, no!”  It is always fun there, full of eye-candy, and worth a stop when there are no cars or buses out front. So, off we went.

You never know what you are going to see, I told Betty to take her camera in. She did, and I did. You know I like diners, and here are two that were in the room of villages (click to enlarge). 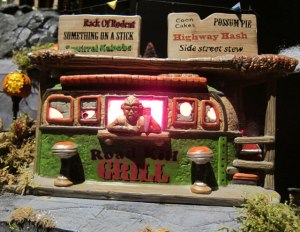 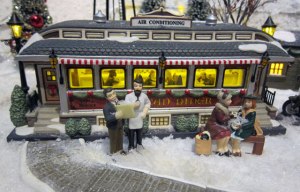 It is always a magical place here.

Betty just posted on their site all about our adventures together. Great images (which I did not include) of our visit to the Green Mountain Railroad — so, please visit what Betty just posted (about 10:10 PM Wednesday) — click on the on the link that follows — https://scotttho.wordpress.com/2016/10/05/its-fall/

1 – Plan a number of visits to Historic Deerfield in Old Deerfield, Massachusetts

2 – Plan to visit and experience the Adams Grist Mill in Bellows Falls, VT

1 – MIND YOUR P’s AND Q’s — shouted out in a colonial tavern by the barkeep to patrons meaning “Mind your pints and quarts.” Time to come fill up for a final round.

2 – ROOM AND BOARD — In colonial homes/taverns, with your room for the night you could also get fed. With limited furniture a board could would be brought out, placed upon trestle or “saw horses” to serve as a table for your meal.