HELLO – I keep so busy that it has been 4 days since I got home, and not had the time to tell you what I experienced. But, the main thing for me is to write to remind myself, and sharing with you is an added benefit for me.  I was ready for a break. Sadly we will not be able to stage A CHRISTMAS CAROL this year because at the auditions we were short 3/4 of the needed cast. That gave me time to focus then on THE WALPOLE CLARION, which I am now the sole owner of, and publisher for. I am very pleased about that. 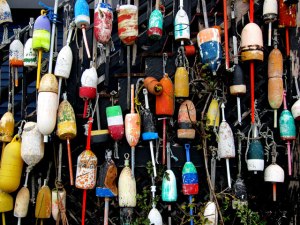 But in the back of my mind was to explore more in depth lower seacoast Maine, even though it is “closed this time of year.” I tried booking at an Inn in Portsmouth, NH, but they did not get back to me (until I was already in Maine). Then I found an interesting Victorian B&B in Ogunquit, but before they replied I found a Colonial B&B in Ogunquit, The Black Boar Inn, the original part built circa 1674, and the addition in 1720. I booked there, “a meant to be due” due to the delightful 2 1/2 hour breakfast I had with a lovely lady and an hour plus the next. We had shared much of life’s experiences, and beliefs and philosophies. It was fun, and she and her husband live nearby, so hopefully we will visit again. But, stop “talking Ray,” and tell us where you explored.

Before leaving, I pulled many booklets of the Maine regions from my archives, and a great 1991 (yes 24 years old) book on country roads and byways in Maine. I like the author’s routes and philosophies; e.g., this is a road guide written in the form of an “old fashioned travel guide,” and go “on a drive – not a guided tour,” “take pleasures as you find them.”  I developed a route — BUT, take note vacation booklet makers — include a local map, and to be really helpful make it the centerfold.

Do I ever go a direct route? NO ! I made arrangements to deliver an item I sold on Craig’s List to Dover, NH. Not having been there, I was able to then cross the border to South Berwick, Maine, then Berwick, back across the river to see Somersworth, NH, and then let WAZE take me backroads to York Village to follow the coast up to Ogunquit.

York consists of York Harbor, York Village, and York Beach. I need to revisit York Village in the spring when the Old York Historical Society reopens its 7 historic buildings. In the early 1900s, celebrated people, including Mark Twain, discovered the underdevelopment of this area with its 18th century charm. To preserve that, they purchased the structures forming the core of the historic village.

Cutting over to the coast, I worked my way north along the beaches to Nubble Light, built in 1879, on Cape Neddick. The sun was setting, and now you know why artists flock to the Maine coast and this most popular spot. The colors change every moment.

and, then, not more than two minutes later (and the flashing light came on too) 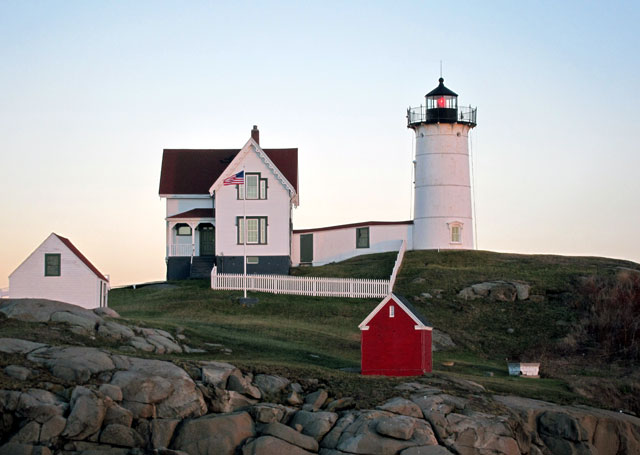 With the sun setting quickly about 4:30, I headed up the coast to Ogunquit to The Black Boar Inn on US Route 1 in the village center. I had selected the King James II room on the first floor with original Indian Shutters. 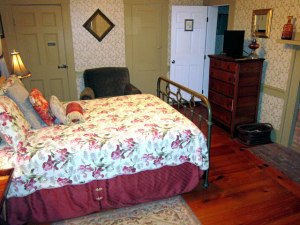 But, I had the whole first floor to myself, and spent most of my time in the sitting room. The second night I had a fire. 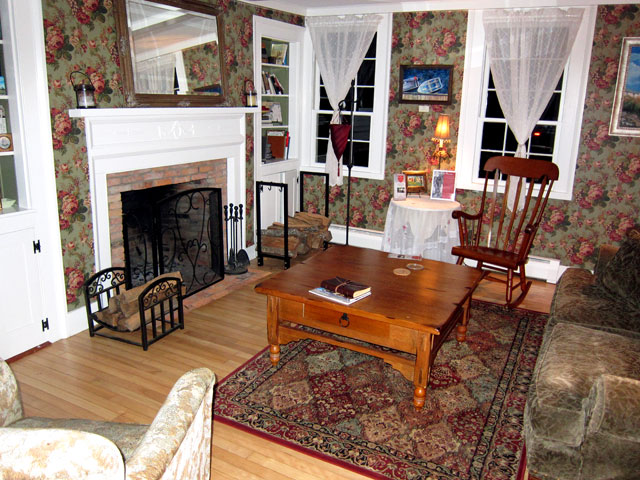 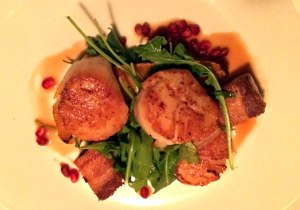 At breakfast Tuesday morning, I was seated, and an exuberant and happy Heidi came in introducing herself. She too needed a break from a hectic few months, but her husband could not take the time.  In the next 2 1/2 hours we shared our life stories (so similar on many levels), and solved the world’s problems – wouldn’t that be nice. At least we shared, and agreed on, what would make the world a better place.

After 11AM, it was time to depart on my planned route continuing up the coast to Cape Porpoise before turning around. Of course, I was on the less travelled Shore Road, Route 9. I first past the Rachel Carson Refuge, and stopped to browse the visitor center to reacquaint myself with this fascinating woman, and original ecologist.

Before arriving in Kennebunkport I passed Antiques on Nine, but was fascinated, so

did a U-Turn. Not really antiques, but wonderful repurposed items, and European imports, I was very much impressed with the furnishings and decorator items. If I had another home to furnish, I would back up a truck, and fill it up. Worth the stop. And, eventually I need to make a unique fountain for my porch.

Arriving in Kennebunkport, I was glad it was “off season.” I have passed through before (also off season) and would never want to be here with crowds. Strictly a tourist stop, and traffic would also be at a stop, with no places to stop and park. STOP RAY, that is enough with the “stops.” But, RAY RECOMMENDS – don’t Stop at Kennebunkport, and circle around in summer.

Entering the “fray” at Kennebunkport, Maine 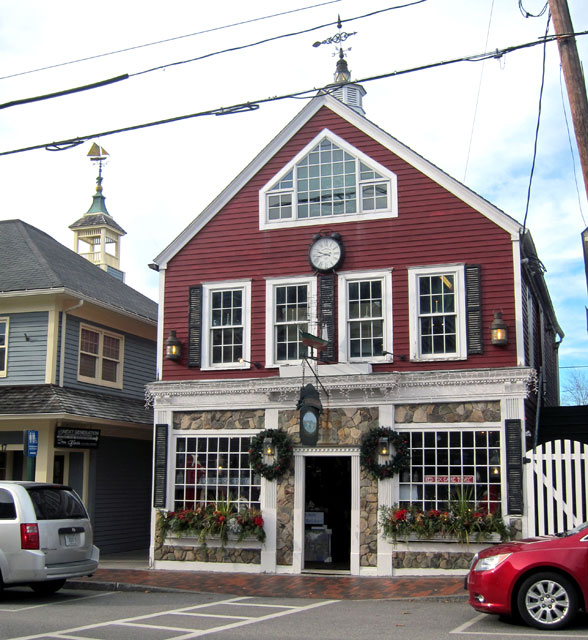 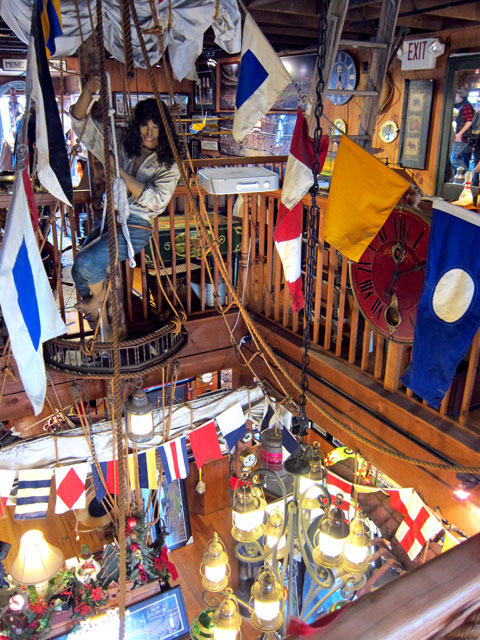 I left town on Route 1, but remembering I had forgotten to head to Walker Point, and I had WAZE route me back to the point. I love WAZE and end up on great back roads with scenery and architecture most people miss.  Download the WAZE App !!! What I had to get for you was the obligatory image of the Bush Family Compound (yes, as in Presidents) 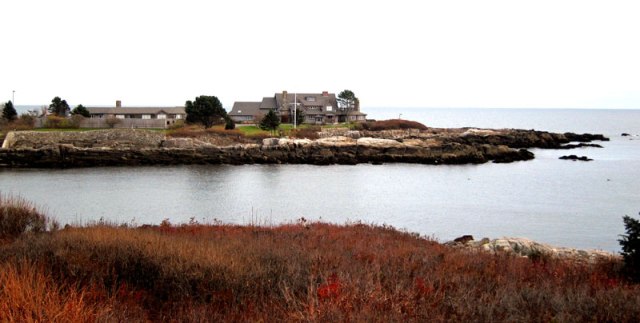 I continued up along the shore, having it all to myself – just perfect. Arriving in Cape Porpoise, I got a wrap in the deli (only choice in “town” – and you have to stop to see their goodies and displays), and then took it down to a park bench in the harbor overlooking Goat Island and the Cape Porpoise lighthouse.

From my park bench at Cape Porpoise

and, looking to the right at the pier where lobsters were being unloaded

the big companies have shanties out in the harbor where the local lobstermen bring their catch, sell it, and transfer the poor things into the plastic containers on these boats to be brought to shore, unloaded, put in a truck, and head off.

I then figured I would head north to cut west to Arundel to head back to Oqunquit on US Route 1 (it was soon to be dark). I turned a corner, and there was the Seashore Trolley Museum. Remember the afternoon I spent there 11 September 2012?

And, at the corner of Route 1 was the Arundel Antique center where I “scored with books” in 2012, and did so again. Darn, I am good at what I do !

Relax back at the B&B, another couple was now upstairs, but I still had the sitting room for myself. I decided to walk the two blocks “downtown” and glance at menus. My second look at the menu at The Old Village Inn, and I went in. Again, so nice to be off season. I enjoy salmon, and love the many ways it can be prepared and experienced. And this entree was only $19 !!! And, wonderful !!! 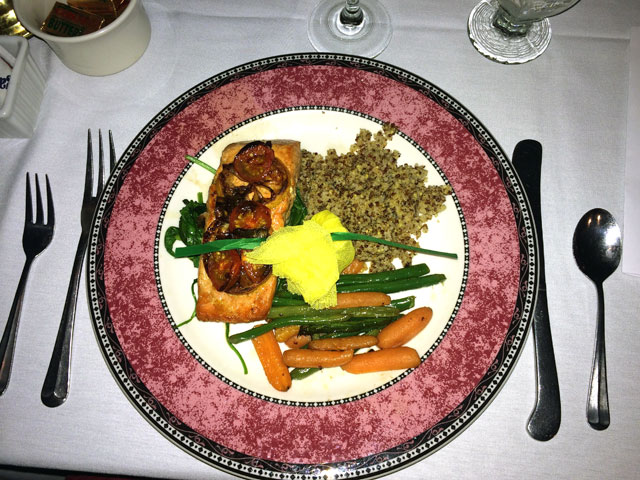 Wednesday morning Heidi and I visited for about an hour and a half before she headed home to the Woodstock, Vermont, area. It was badly overcast and rainy, but I headed to the southern section of Ogunquit to see Perkins Cove. 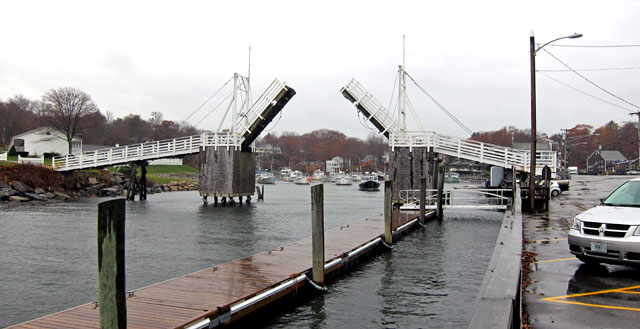 There is a lovely shore walk – Marginal Way (land along the margins of the land owners), but weather did not permit my exploration. I soon cut back over to Route 1 to quickly get back to York Village, to head back along the shore to Kittery Point. I stopped at The York Antiques Gallery.  I recommend you stop. Nice to again see nice quality items and not what is passed off as antiques nowadays which is basically cast-off yard sale junk. Sadly, nothing tempted my checkbook.

I turned left off US 1 to York Village, headed out of town on 1A turning south at the start of 103 to Kittery Point and Kittery. But at the corner where I turned was Stonewall Kitchens headquarters. I stopped and looked, and “grazed.”

I had to see the Frisbee General Story (you know me and country stores) established in 1828, and still in the original family – but currently almost empty and for sale.

the interior still had many original, or at least early features.

and, looking across the street to the Post Office – closed for Veteran’s Day 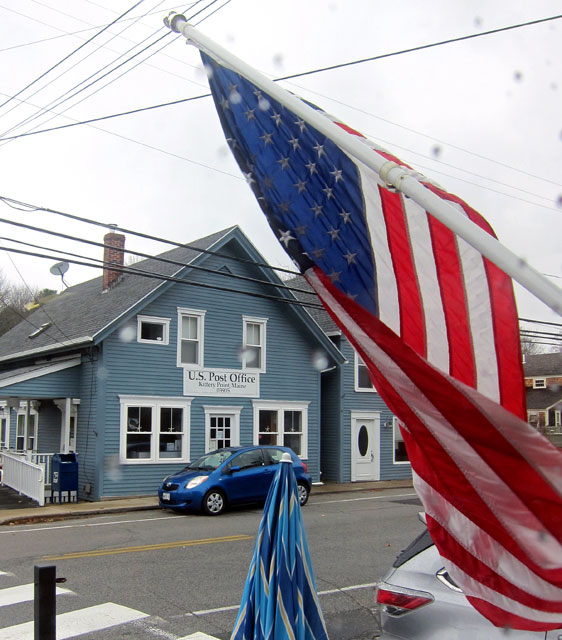 And, Kittery Point has to be explored again and again after more research on the history and especially the colonial architecture. In fanning out toward US 1 before coming back to cross Memorial Bridge to Portsmouth I suddenly saw a small sign pointing to the right – “Kittery Historical & Naval Museum.”  I knew nothing about the museum. I stopped (of course), and RAY RECOMMENDS — go visit to learn about this area and its amazing history. I will be going again. Here is the view upon entering. 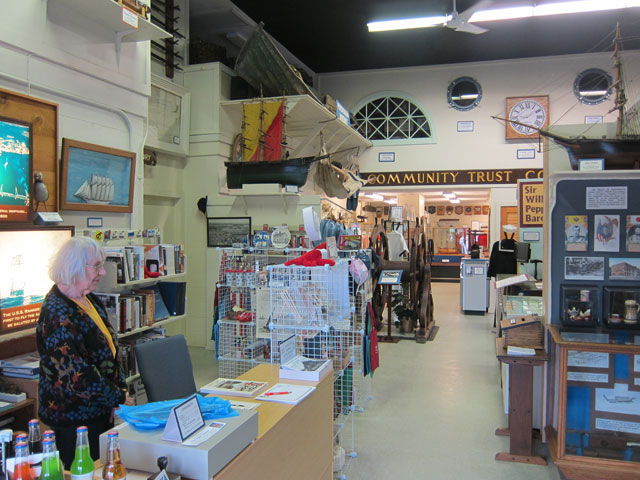 Here was an interesting display of Navy dinner ware.

and, turning left, above a doorway was this plaque:

I could not believe it, my heart skipped a beat. Capt. Purinton was my first Commanding Officer on the USS Bushnell AS-15 in Key West, Florida. This was my first duty station after graduating from Navy Supply Corps School. I was on board from 1969-1971, and he retired during that time period. He must have moved back to the Kittery, Maine, area because the museum was established in 1976.

The history video was well done, and worth seeing again, all the displays supporting the area history, equally well done, but the most amazing thing there (I thought) was —

Capt. Purinton was also instrumental in getting this structure preserved here. Essentially like a partial blockhouse, the walls are hewn timbers 6-8 inches thick, and wide. My images cannot give it full justice. 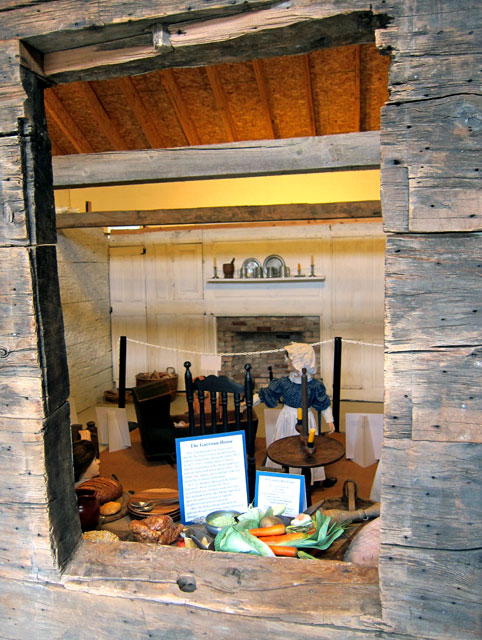 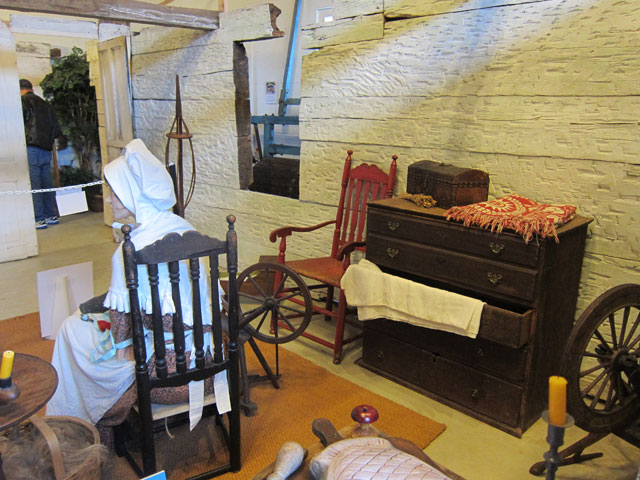 With many additions over the years, the original Garrison House was uncovered during the dismantling of the home.

Before crossing the Memorial Bridge to Portsmouth I needed to explore the Foreside Neighborhood.  Kittery is a village of neighborhoods, and I had read about Foreside in one of my 15,000 plus books. The business area sits outside Gate 1 to the Portsmouth Naval Shipyard. Sitting at the window of Lil’s enjoying soup and salad, I felt as though I was experiencing the area during World War II.

Getting close to 4PM, so I went through Portsmouth, NH, without stopping to pick up US 4 towards Concord and home. Once you pass Durham, you enter what is known as “Antique Alley”, and I made several stops, and bought two books.

Arriving home, and reflecting back, I did so very much, saw so much more than I have shared here. And look forward to re-exploring the area. May I recommend you explore and experience the lower coast of Maine – but if not a beach person (as I am not) do so when it is mainly closed.