NINETY MILES IN THE REPUBLIC OF VERMONT – 8 AUGUST 2015

Well, it should have been 135 miles (more on that later). And, why do I seem to always be in The Republic of Vermont you ask? Because there are always things to do there that I like to do.

Last year BLACK BEAUTY and I stumbled into Norman’s Attic in Arlington, Vermont sponsored by St. James Episcopal Church. It was fun, so I thought I would venture over again, and when I found out that the Weston Walking Tour was the same day (did not make it over the last time it was held), it made sense to combine the trips for an outing.

So, off BLUE BELLE and I went for the 30 short miles to Weston (traveling up and over Andover). A friend recently asked, “how do you decide which car to drive?” Well, LADY RAB has has some hiccups with her radiator, BLACK BEAUTY currently initially runs rough, but BLUE BELLE is a charm to drive, and runs nicely.” 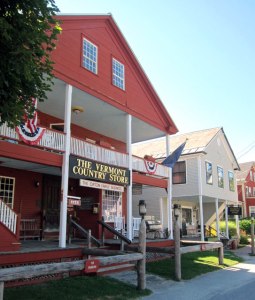 We (BB2 and I) arrived in Weston at 9:30, and the tour started at 10 from the Gazebo on the common. Early, too bad, have to go visit the Vermont Country Story. As you know, I first stopped there one evening in 1962 in my 1929 Model A Ford Roadster and was fortunate to be able to meet and visit with the store’s founder Vrest Orton. Today the store had just opened, and I had it to myself (no pesky out of staters yet). It is always fun to visit because not only the merchandise, but the room arrangement and displays are always changing, and you know I love old country store stuff. (remember you can click to enlarge) 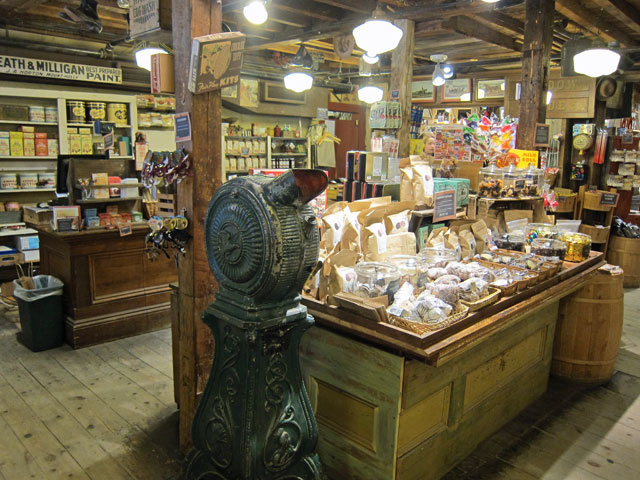 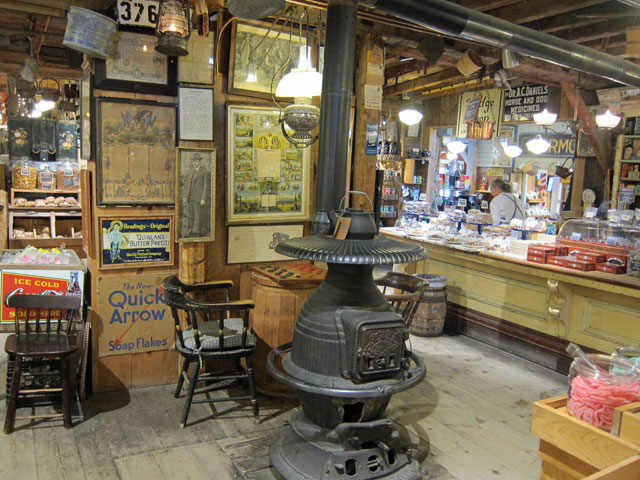 I saw a hat, looked at it twice, took it to the counter. “Would you like to wear it out?” the clerk asked. The perfect topping off to keep the sun’s rays off Ray as he strolls around. The labels even said UV protection (what caught my eye originally along with the style). Check out Dorfman Pacific Company.

Not a bad “selfie” – I have long arms. Gary said this was the best one I took.

The tour started at 10:00 with 30 people in attendance. The tour director said that the 11th person who walked up was the 600th guest on the tour. The hour and a quarter tour (which lasted one and 3/4 hours) took us to 25 spots though out the village. The tour, instead of architecture, focused on stories of the people who built the houses, lived there, what they did, and contributed to making Weston what it is today. At one point there were a number of mills (we found the cellar holes), and when concluding at the Weston Playhouse we learned how that all came about.

The tour started on the common. The common was created in 1886 by nine women residents who wanted to fill in the smelly frog pond in front of their homes. They received a charter to do so from the state, and the park is still maintained by nine women Trustees. 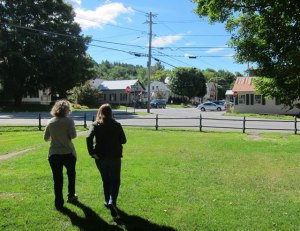 Beginning the tour heading off the common. 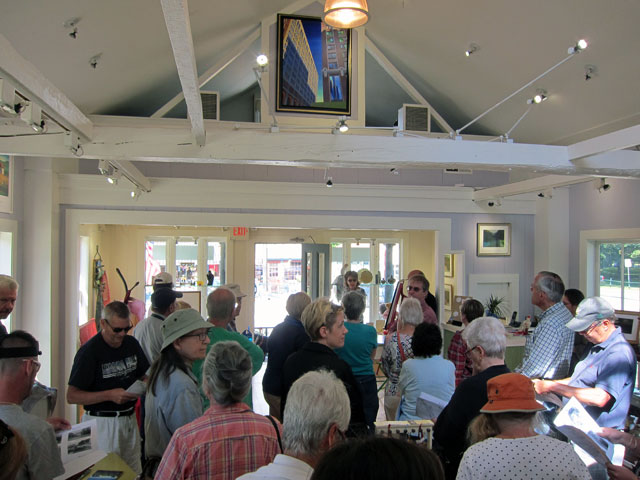 The first stop was inside the first permanent post office.

We walked past the library, and were told about the woodwork inside. 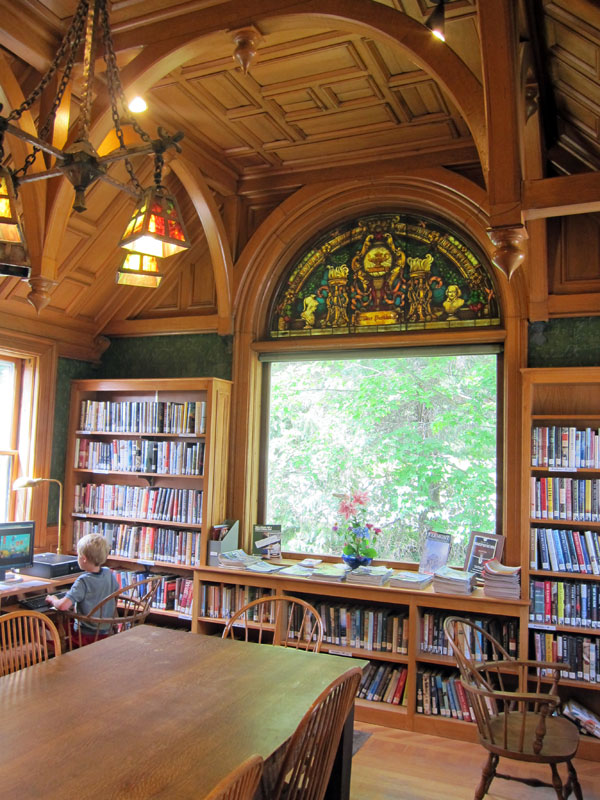 After the tour I went back to look inside the library. 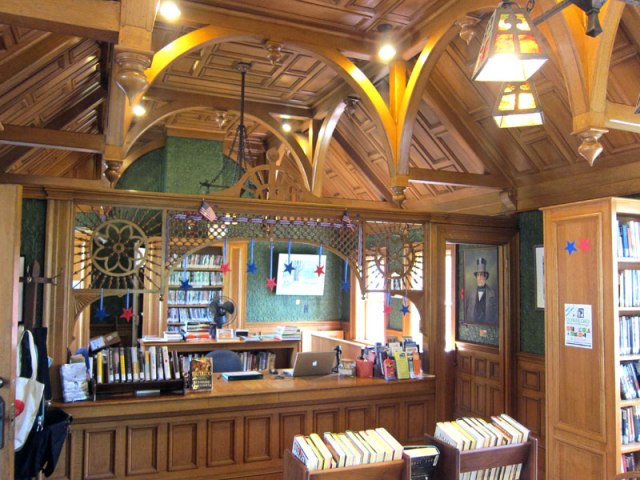 And, this is looking the other way to the checkout counter and office 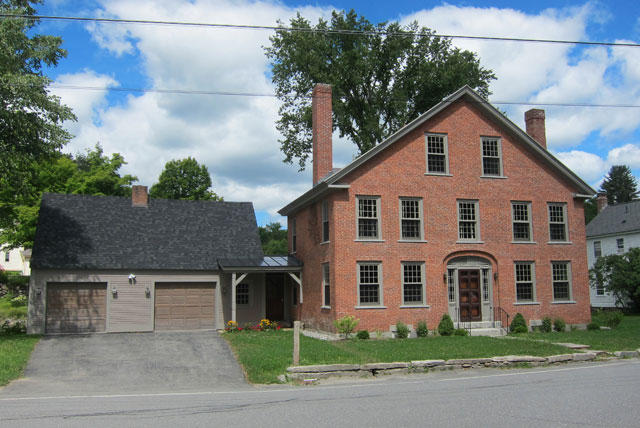 Vrest Orton’s home on the common. Now restored and used for corporate functions and guests.

I enjoyed the walking tour, and have to go again. When I checked the Weston Historical Society’s website I discovered that I had no idea of all they have to offer in various museums. Another trip very soon. And, I plan to send a donation check in thanks.

RAY RECOMMENDS (Strongly) – that you take the walking tour of Weston, Vermont, and tour their museums.

I headed out of town picking up Landgrove Road knowing that eventually I would end up back on VT Route 11 to continue to Manchester and Arlington. A nice circuitous dirt route that eventually took me past the Landgrove Inn. The inn has been “on my list” for a special dinner, so I did not go in to peek, because I want to experience it all at once.

Once back on Route 11, it was up over Bromley Mountain, down into Manchester Center, and south on US 7A (you know I love US7) to Arlington.

I got a parking spot right in front on the street, and headed to the church’s food tent where I had pulled pork sandwiches.

I sat down, and struck up a conversation with the couple across from me, and married for 62 years. His life sounded familiar, and his name came up. “Wait, are you Bob Alden? I met your son about four years ago.” In fact, I bought van loads of books from his son. Well, fantastic conversation followed including learning more of his work  as News Editor at The Washington Post and direct connection to the Mayflower. Small world, but it got smaller. I took part of my lunch back to BLUE BELLE, and from somewhere I heard, “Ray, hey Ray.” 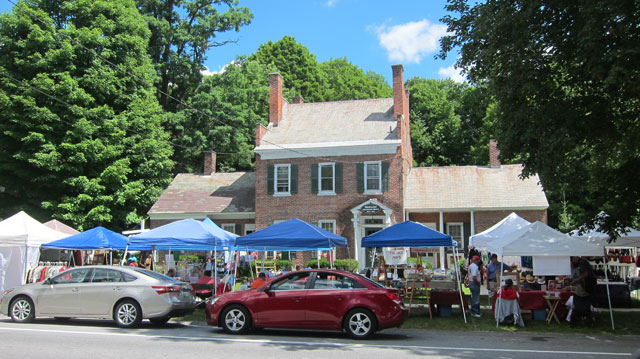 Looking across US7A and waving frantically was my sports car friend (and repairer) Butch (he had spotted BLUE BELLE). They were traveling up from Dover over to NY State, and finding the festival he stopped for his wife. We had a grand time catching up, and exchanging details, promised to stay in touch.

The festival was alright, not as exciting as when I serendipitously found it last year – but made special with the friends I visited with.

I then headed over to East Arlington. Twenty-three years ago (BC – before Cathy) when I traveled to this favorite area there were five antique shops in the little village, and I always bought very well.  Only one is left, and when I walked in (get there now maybe once a year), the owner said, “Hi Ray.” Boy do I have fun. We chatted about the over all state of the antique business and the changes to the area.

BLUE BELLE then reminded me that she had not been to West Arlington, through the covered bridge across the Battenkill to see Norman Rockwell’s second home and studio in Arlington. Two weeks ago I read a wonderful book on his life in Arlington prior to moving to Stockbridge, Massachusetts (surprisingly another favorite spot).

Norman Rockwell’s home is now an inn, and looking at their website, the Inn on Covered Bridge Green is now high on my list to experience. 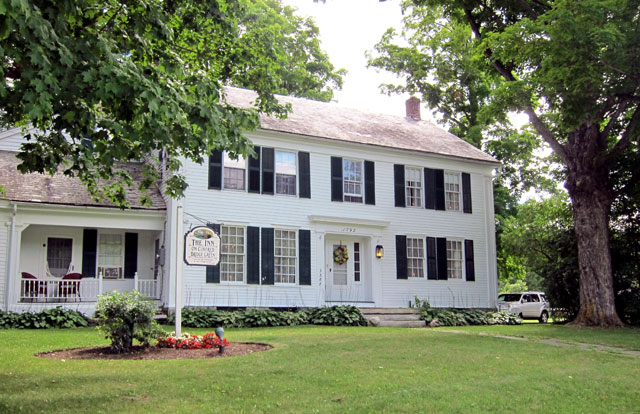 And, here are Rockwell’s studios to the rear.

And, looking back at the Covered Bridge off Route 313 from Arlington toward NY State. 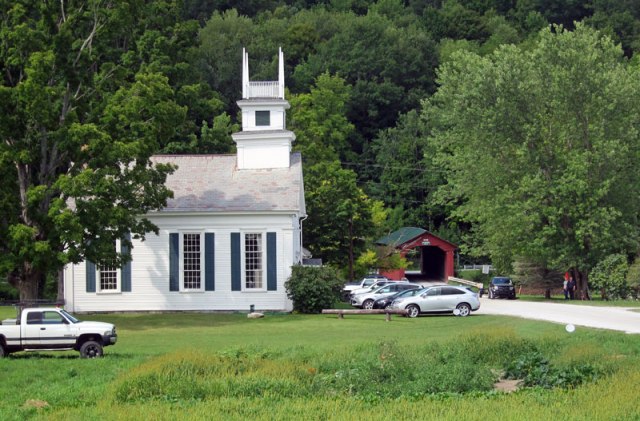 Well, it was time to head home as I had done all I wanted to do (and a tad more). Thursday night I got a great email from Number 2 son, Gary, that he wanted to visit Saturday night and Sunday. He was joining friends on Saturday following a benefit bike race in Windsor, Vermont. He figured he would arrive sometime after 7 PM.

Back to US7A, north to Manchester Center, then east on Route 11 and start to climb Bromley Mountain. Putt, putt, lose power, die, pull to side of road. Well, BLUE BELLE has been a tad temperamental recently, but all I have had to do is tap her dashpots (no, that is not dirty talk, MGA talk), and off we go. Not this time. I call a friend who recently closed his repair business. “Tap the fuel pump,” he reminds me. And, it worked. Off I go — for about another mile. I coasted onto dirt, Lost Woods Road – ironically across Route 11 from where I had a car quit 40 years ago.  BLUE BELLES’ fuel pump had decided on taking a long holiday. Depending upon where I stood I was able to get cell service, and my car friend gave me a number to call. Several calls back and forth and that fellow said, “well I would have to charge you $250 to $300 to get you home, but your AAA card will do it for free.”  In January, when my extended warranty on my “new car” expired, I rejoined AAA after maybe 40 years.  I called them about 4:30, “yes, we can take you back home.” At 6PM —

And, about 7:45 BLUE BELLE and I were safely in my driveway. Gary arrived 45 minutes later, and we tucked BB2 in her berth.

No big deal. If you get upset over something like this you are only asking for heart problems. As I tell people, “after what I have experienced in my life, nothing bothers me. Getting upset is a wasted emotion.”

Gary and I had a great evening chatting on my porch. Breakfast at Cafe Loco on Sunday (RAY RECOMMENDS visit and support Mike at CAFE LOCO in Westminster, Vermont), and then we explored the area “filling in the map.” Yes, I found another connector dirt road in Alstead that I had not been on. Too much fun. Gary headed home to Cape Ann about 4:30, and I have been finishing this post as the band is warming up on the Common. Time to heat a casserole, pour a glass of wine, and read on the front stoop listening to the band.

So, another fun couple of days, and besides visiting Weston, Vermont, and all it has to offer, RAY RECOMMENDS – Don’t let anything (like a car breakdown) bother you – it is not worth it.

And, today’s 135 BLUE BELLE miles she had her rubber soles on the pavement for 90 miles, and rode piggyback for 45.