And, I am running hard with Chas who asked me to join him. As with New Orleans (still owe you all that) I am finding it hard to find the time to “tell all” to you. The first full day here (22 February) we opened and closed The Henry Ford, and I will share that day later. Here I will give you our second day, first.

I was last at The Henry Ford Museum (as called then) in April of 1957 when I was a guest of the museum with my Dad. We also were toured through Greenfield Village, and our personal tour continued at the ore boats at the Ford Rouge Plant all the way through to a 1957 Ford Fairlane rolling off the assembly line. “Would you like to pick a new car fresh off the line and buy it now?” our guide, Sally Hume, asked my Dad. Not something we could do at that time.

Deciding to devote a full page later just to The Henry Ford, first I will tour you through Detroit during my second and third full days (23 and 24 February).  DETROIT MUST BE EXPERIENCED. Detroit is a French name meaning “The Strait.” This is the narrowest point of the Detroit River between the Great Lakes Erie and Huron. Forget the bad you have heard about Detroit. The history and culture is fascinating and important, there is much to see and do, wonderful food, and you will not be able to comprehend the current landscape of the city without seeing it.

The second full day we began our experience at the Rouge River Plant where Ford pickup trucks are currently assembled by 6,000 employees.  By 1928, the complex was the world’s largest industrial center, and over 100,000 workers entered the plant daily.

View of the Rouge River Plant from the observation roof.

The tour starts with two multimedia experiences, then a view of the 2,000 acres from a rooftop, and a catwalk tour above the moving assembly line (no pictures allowed).  At the conclusion you get to see some of the most famous vehicles that have been produced here.

Representative “famous” cars made in the Rouge River Plant

Remember my “galleries” may be opened into larger slide shows:

1955 Thunderbird – almost bought one for college, but then got my 1956 Chevy two-door hardtop

What you hear most about Detroit are the abandoned homes, commercial buildings and factories. Detroit is a large land area, and so much land is vacant. The destruction (both from the 1967 riots, Devil’s Night, and plain old walking away from it) is everywhere, even in “downtown.” So, here a just a few of the images I took.

And more abandonment, which is everywhere. Of amazing note are all the vacant lots and blocks.

Entranceway into the Packard plant

View through from our parking garage into a building being saved

“Midtown” was being developed in the 1920s, but now is mainly vacant blocks. The Hotel Eddystone  (and the Park Avenue Hotel to the left) had been surrounded by city, but “a combination of factors -including the 1967 riot; the introduction of the freeway system; white flight; businesses moving to the suburbs; and increase in blight and crime – bled Detroit of its population and its tax base. Office towers went dark. Hotels closed up shop. Detroit, simply put, became a city of fewer people – and people with lower incomes.” 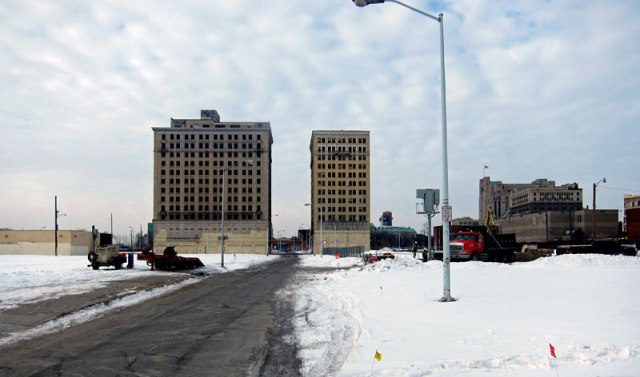 Also protected by historic designation, and sadly deteriorating alone is The Lee Plaza

What we found fascinating in driving around was that there are a few pockets of lovely homes somewhat untouched in just a few block square areas.. These were the homes of the automobile barons, and upper management. Homes that are now valued at $500,000 or less for up to 8,000 square feet (over 8 million plus for sure in Westchester County) would back up to problem streets with values of $10,000 plus (or less for burned out frames). Of particular fame is the Boston-Edison historic blocks where Henry Ford lived from 1908 to 1915. 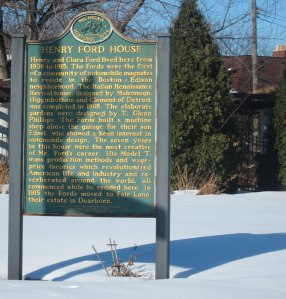 You may know my love for “old cars.” My Dad had me first drive a 1919 Model T Ford – not something people of my age did. And my first car was a 1929 Model A Ford Roadster.  And after about 7 Model As, LADY RAB – a 1931 Tudor Sedan is in my stable.  My Dad’s favorite treasure was his 1910 Model T Touring Car.  What a treat it was to be able to get into the building where the Model T was born, and Ford had his first factory from 1904 to 1910 – The Ford Piquette Avenue Plant.

This corner on the third floor is where the Model T was designed and developed. Henry was always on the floor working and not in his office

Where do you go from the “holy grail?”  To the Highland Park plant, of course, where production of the Model T went into high swing. Production continued here until the late 1920s when the Rouge River plant came into full swing. 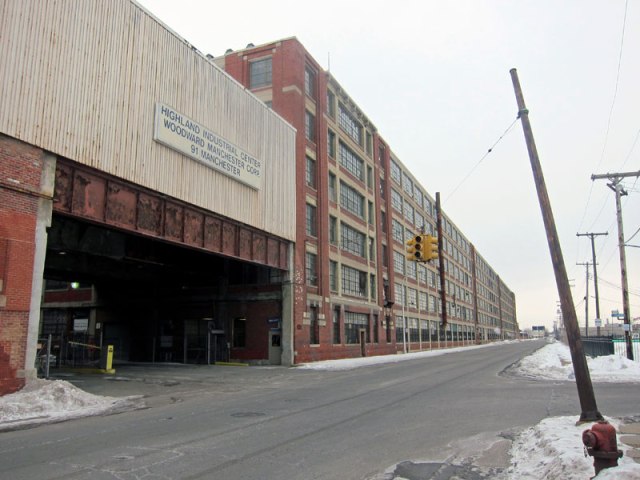 The south side of the Highland Avenue Plant. This entrance opens to the interior where the iconic images and videos were taken with tons of Model Ts rolling out.

Since 2011 part of the complex has been used to store archives and artifacts for The Henry Ford.  I cannot even imagine the collection of cars and transportation items inside since I did not see any of the bicycles or boats from my 1957 visit to the museum.

We started Tuesday at the Detroit Historical Museum. I don’t know whether to recommend you start your visit to Detroit there, or after a few days as we did.  Several of the permanent exhibits provide exceptional history and culture.  Start with the Gallery of Culture, where the 20th century is detailed by decade.

Gallery of Culture in the Detroit Historical Museum

I also enjoyed the Streets of Old Detroit, Frontiers to Factories (200 years of history), and America’s Motor City (kind of weak). A temporary exhibit on Detroit’s restaurants and speakeasies was up my alley, and provided us ideas for that evening’s repast.

And, the store’s interior.

We then began touring neighborhoods heading about 3 miles from downtown where the new center city was developing in the 1920s. Fortunately there was a parking space and I convinced Chas to park so we could see the interior of The Fisher Building.  The Fisher family (“Body by Fisher”) put 29% of the building’s cost into art and decoration, and it shows. It puts The Empire State Building to shame in my opinion, and should be visited. First click to read this plaque in larger view, then come back to see the slideshow of the interior. I hope to get back someday for a tour and to see the Fisher Theater.

Cross area of the central lobby

This former store front had history of the building

Entrance to The Fisher Theater – note “Body by Fisher” emblem

Not too shabby an elevator. Every piece of marble was different and unique.

For 75 cents you can ride the Detroit People Mover – an elevated railway – around downtown. And we did.  I felt like a kid on a NYC Subway traveling with my grandmother back in the 1950s.

Chas and I were the only ones aboard the two car train.

One night we were not hungry so got beers and burgers in a unique and “seedy” little bar across the street from the hotel.  Open 24 hours we would not have stayed if it were not for the entertaining conversation with the “bar keep,” Tara (yes there is another one) who was simply filling in.  The short order cook encouraged me to add my name to the wall. Then he went back to sleep with his head on the bar. 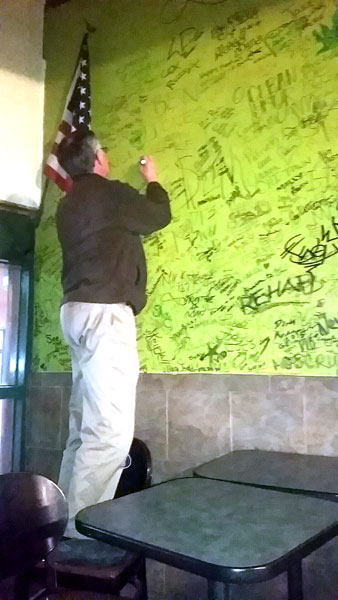 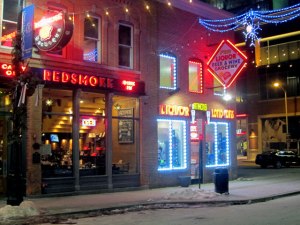 We could have settled with just this fantastic appetizer – Loaded Brisket Fries Golden crisp steak fries, tender beef brisket, cheddar sauce drizzled, bits of green onion and a side of sour cream.  As a result we split a Combo Dinner.

And, at the “Out on the Town” Drinking and Dinner exhibit at the Detroit Historical Museum we decided to give Foran’s Grand Trunk Pub a go — it was great. Get the meatloaf dinner, and look at the interior shots on their website – nothing has changed. 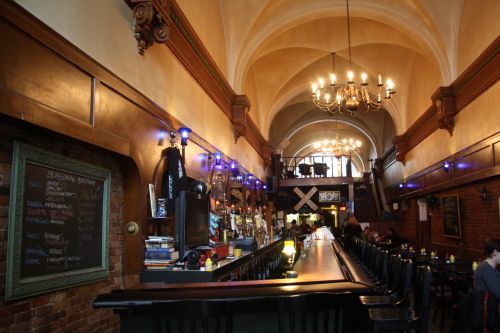 Coming soon – a post devoted to The Henry Ford – mainly images; and, yes Barbara, there is still NOLA to come.