Yesterday I planned to go to the Amherst Railway Society Railroad Hobby Show at the Big-E in Springfield, Massachusetts, but the weather was iffy, so I stayed home and researched and wrote various articles all day instead. At one point I emailed Rob and said, “if I go to the show on Sunday, what time do I have to be back to meet you for dinner?”  “I’ll go with you to the show tomorrow,” he replied.  And that is what we did.

As we got on I-91 we realized that with the Robbie Burns dinner at 6PM, if we waited to

I love this stairwell at the entrance to the Springfield Armory

have lunch after the train show we would not be hungry.  Rob suggested several places to eat downtown Springfield, but settling on Student Prince in Springfield, we had about an hour to do something else.  “We can stop at a few antique shops on US 5,” I said. “Wait, have you seen the Springfield Armory?”  The Armory it was, so off we continued to Exit 7.  You may remember my “Day Off” last April when I first visited the Springfield Armory.  We arrived and entered, and Rob was impressed.  We got to see the introductory video and quickly looked at the Daniel Shay Rebellion exhibit (his protest stormed the Armory on this date, January 25, 1787).  I realized that I need to visit again a third time, and learn more about Daniel Shay.

It was then time to get to the Student Prince Restaurant so we would still have time at the train show. Serving German Food and Beer since 1935, the Student Prince is on the site of the original fort in Springfield erected in 1660, and where the settlers took refuge during an Indian attack October 5, 1675.  Worth a stop! 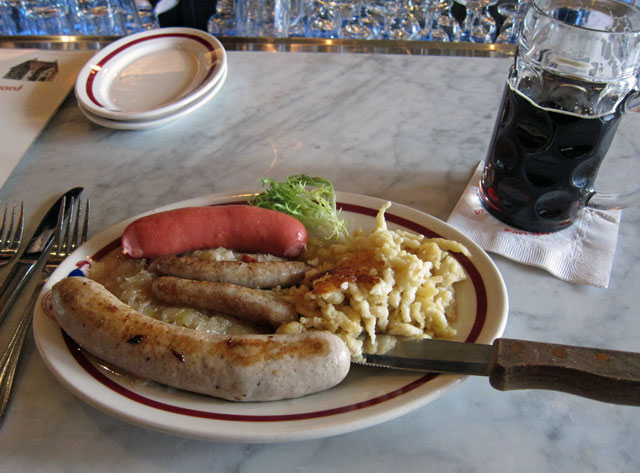 We got to the Big E for the train show about 1 PM.  I had never been to the grounds before — and was shocked!  We both were overwhelmed by the crowds.  And, upon entering the first building we found out that there were four buildings with over 500 exhibitors.  Thus we quickly became “train dead” (a form of “brain dead”) in a very short time, and realized that it is good to do some things once, but then “some things you don’t have to repeat.”  Of course, that is unless you can take grandchildren to see such an extravaganza (hint, Julie, David).  At any rate, here is the view of what we faced as we walked in, and then a slide show to tempt Nikhil and Alex at some future date.

One of the many layouts exhibited by hobby clubs

And he shook and shaked

Trolleys that actually get there power overhead

You Know me and diners.

What a great idea for a drive in movie

Springfield’s train station in one of the layouts.

A Model T Ford “bus” to run on train tracks

But my day was made complete at the Central Massachusetts Steam, Gas & Machinery Association exhibit.  “My grandson and I were watching a movie about Penn Station last week,” I started, “and in talking about steam locomotives they mentioned a Sand Dome.  What is that?” They told me, and you can see it in the “toy” locomotive below (that is what prompted my question).  The dome holds sand on top of the boiler to keep it dry, and high for gravity. A lever is pulled and the sand is released down tubes to the rails to improve traction in wet or icy conditions.  Hope that fast fact made your day too.

We arrived back in town before 5PM, time to get ready for the Robert Burns Dinner at Burdick’s. Such dinners are held around the world on this date, his birthday.  Five courses, each with an appropriate Scotch — and, fortunately I have but a short walk home. 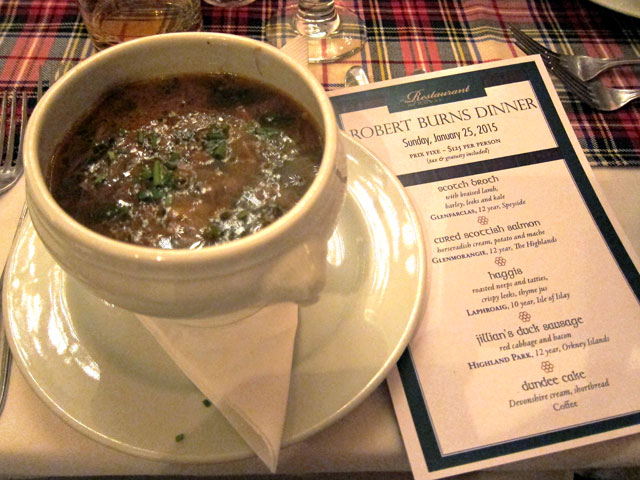 And, here are the courses following the Scotch Broth above:

So, I consider this day’s outing worthy of a short post with lots of images to share.  And now it is onto the next adventure(s).  Night, as always, yours, RAY