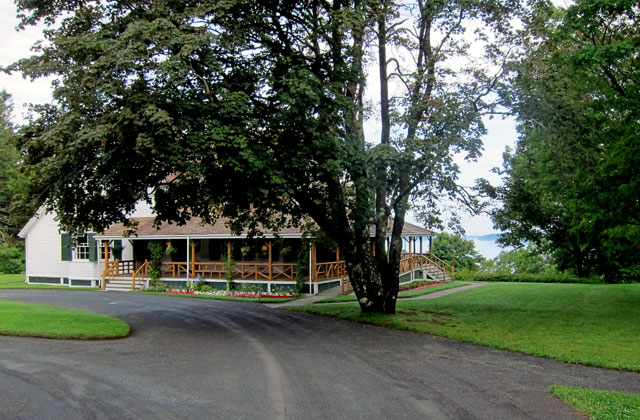 All good things come to an end it is said, and my program at Campobello Island concluded in time for me to catch the 10AM ferry ($20) to Deer Island in the Bay of Fundy. 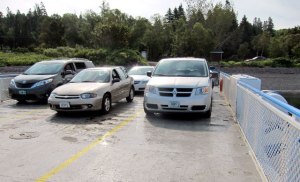 Arriving on Deer Island – not your typical ferry landing 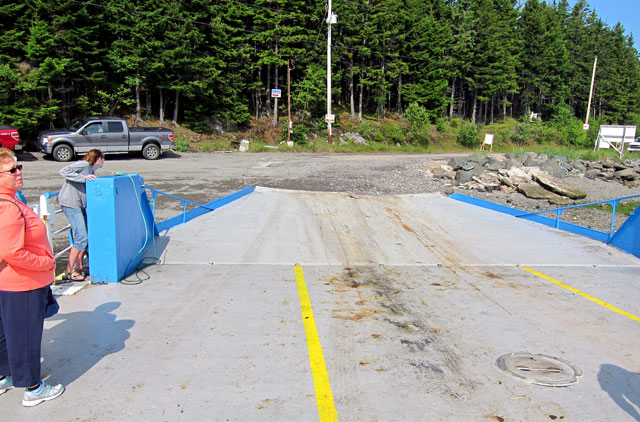 A drive north up the island then to catch the second ferry (free) – now follow me on Google Maps up Canada 172 to St. George (interesting waterfall), then west on Canada 1 exiting on Canada 127 heading south to St. Andrews, Canada.  RAY RECOMMENDS – a day and maybe overnight visit at St. Andrews, NB, Canada.

My first stop? VIC – Visitors Information Center, of course, which was right at the beginning of the loop around the tip of this peninsula and town. I was given a great map of the spots to see, and began right around the corner at the Blockhouse built during the War of 1812. There are few remaining original blockhouses. Damaged by fire in 1993, but restored, I saw fire markings on some of the beams holding up the second floor. 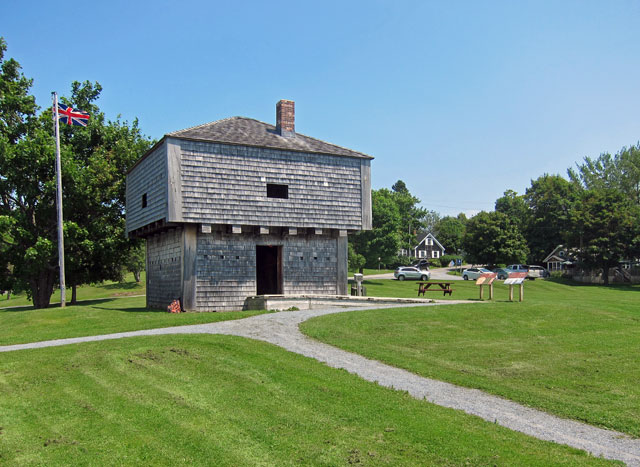 In case you would like to learn more about blockhouses, open up this gallery of images to learn the history here.

Continuing a short distance on Water Street I arrived “downtown.”  St. Andrews is Canada’s oldest best preserved 18th century town, and its oldest seaside resort. The typical grid town layout I found to be an architectural delight and in pristine condition. 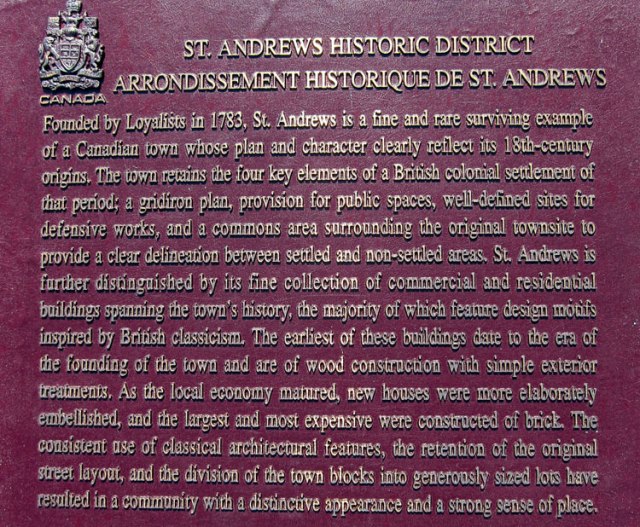 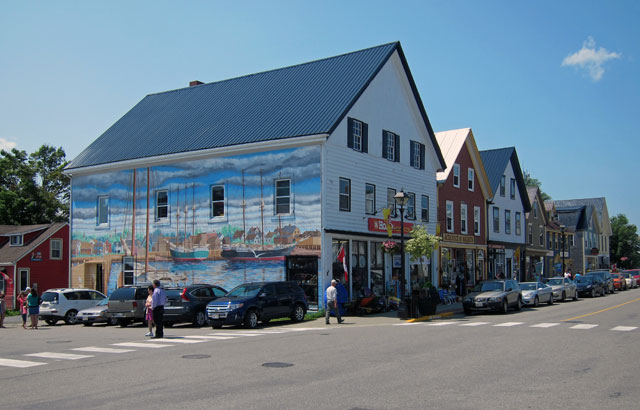 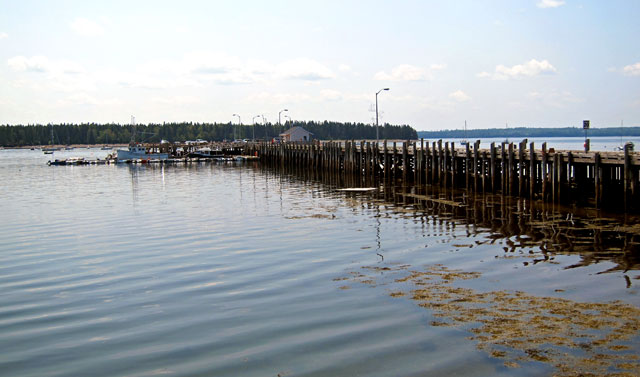 Just one of the pristine homes – unique board front, indicative of being built by a shipbuilder 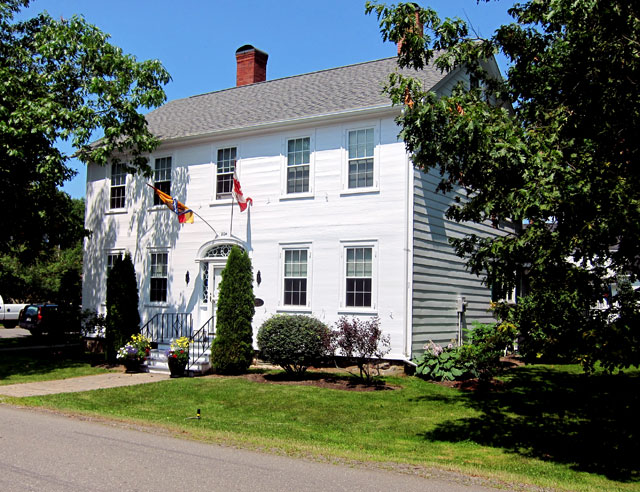 Walking around I toured Sheriff Andrews 1826 house, the old Gaol and the Ross House. Then I drove along the shoreline and looped back to the Algonquin Hotel opened in 1889 having been built by the Canadian Pacific Railroad. With my interest in old grand hotels I, of course, had to tour the inn and grounds.  The outside retains its original charm but the interior is new, but elegant — not my longing as in the original charm of Stockbridge’s Red Lion Inn.  But, I had to see it (of course I bought the book on the history of the hotel) 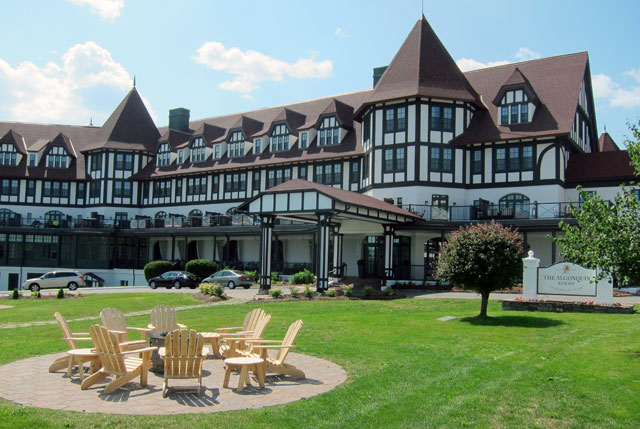 Somehow this “rocking chair study” is not classic enough for me 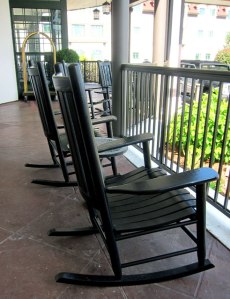 Around the corner was one of the top ten Canadian attractions – KINGSBRAE GARDEN. Covering 27 acres, the garden opened to visitors in 1998 showing more than 2,500 varieties of trees, shrubs and plants in very natural settings. Much more than simply flowers, to my uninitiated eye the settings all seemed to be so natural. I spent an hour walking the grounds, but you can easily spend the day.  I did want to include one colorful image for you. 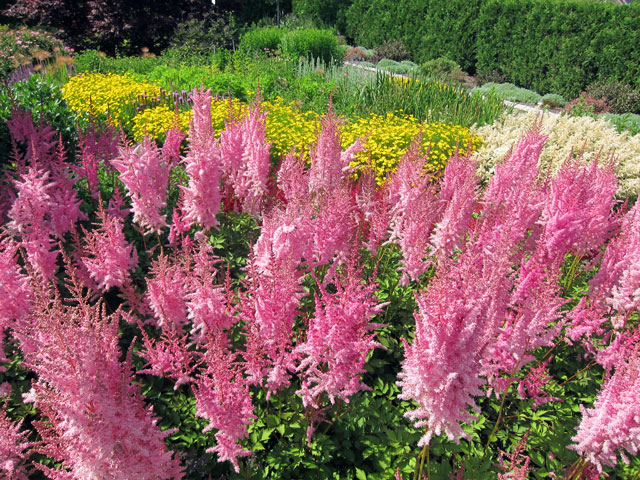 Before heading out of town I wanted to “drive” over to Ministers Island (” ” on purpose). So named because during the American Revolution a Connecticut minister who was loyal to the crown was eventually driven away and crossed the border to Canada (as did thousands of Loyalists) settling on this tidal island of 500 acres. Eventually he relocated in the town itself.  Sir William Van Horne, builder of the Canadian Pacific Railway “discovered” the island in the 1890s, and built a 12,000 square foot cottage.  The island can be driven for a fee, and many of the buildings toured for that admission.  I did not take the time to drive the island, but since the tide was out, had to drive to the island.  So, here is the “modern car” – the no-named “grey ghost” on the ocean’s floor. 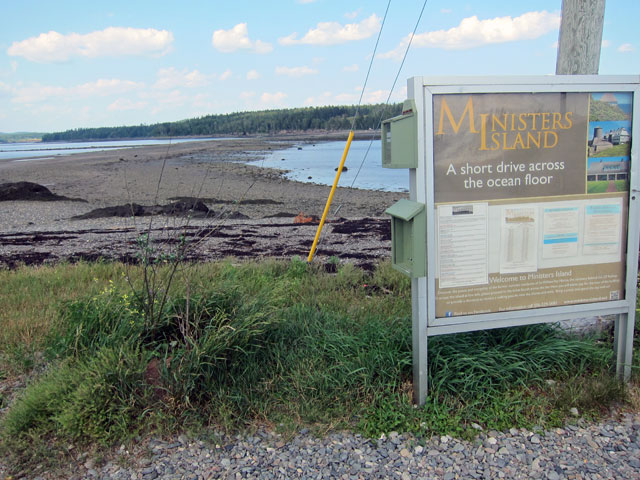 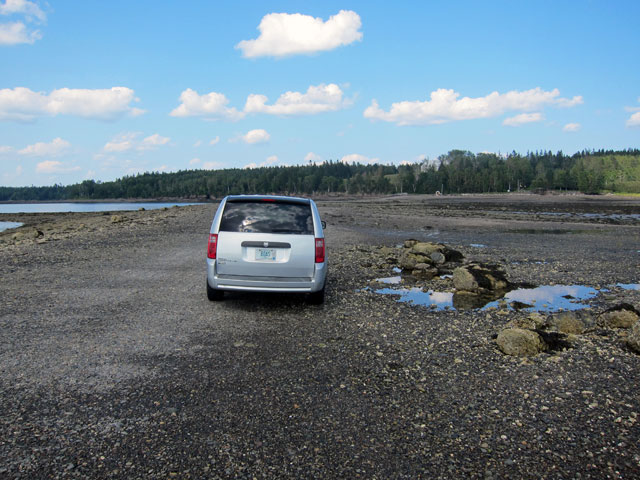 Heading back north on Canada 127 on the west side of the peninsula you pass St. Croix Island. Established in 1604, this is the first white settlement north of Florida in North America. The US also has a National Park on the Maine side of the river, and click here for that website.

St. Croix Island looking across the river to Maine.

And for the history of this important site, open up this slide show and read the plaques:

Now, that was a pretty full Friday the 25th. Unfortunately I was getting a bad throat and cold.  The first day of the conference an older man sat next to me hacking away saying, “I have a bad cold, you don’t mind if I sit here do you?”  “Why yes,” I should have said.  And, my right foot was starting to act up.  I had not planned my Saturday yet, nor where to stay Saturday night, but I had been able on Thursday to book a B&B in Calais, Maine, so I crossed the border at St. Stephen, NB – not worth a stop – into Calais.  Now, forget your French, Calais is pronounced “callus” – and the town is.  I checked in, started struggling with what to do on Saturday, tried to book the Poland Springs Inn, but finally decided to turn in, sleep and feel better, and probably just get home Saturday.

At 9AM, Saturday, I began my journey home with the only thing on the schedule to see the Poland Springs Inn area – on the list a very long time.  Route 9 takes you from the border to Bangor — it is the only route, so no shunpiking, but it is only two lane, nothing but trees, and often lacking in telephone poles — so it does qualify. Ninety-five miles of basically nothing.  Approaching Bangor I saw a small sign that said Leonard’s Mill. That reminded me of something I read about it being the Maine logging museum (remember a few months ago I went to a logging lecture in Massachusetts?), so I turned and headed that way.  Sadly, no one ever told the world it was closed, but I jumped the gate and wandered in to see not much was there. 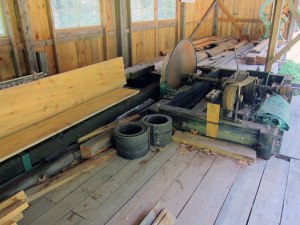 I passed through Bangor (save it for another day) and headed to Augusta, where I decided to turn into the downtown.  Glad I did, for there was Old Fort Western which I had also years back read about. On the Kennebec River, this is the oldest wooden fort in New England and was built in 1754 as a fortified storehouse to supply Fort Halifax during the French and Indian War. The walls are logs close to 18-20 inches thick.  Over the years the building served many purposes (and changes) enabling it to survive.  After serving as a fort with blockhouses it was a trading post store, then housed a prominent family, and in the mid-19th century turned into tenements to house Irish Famine refugees. Each changed added windows, chimneys and dormers to the original structure, but the original still exists – WOW.  I had an interesting tour. 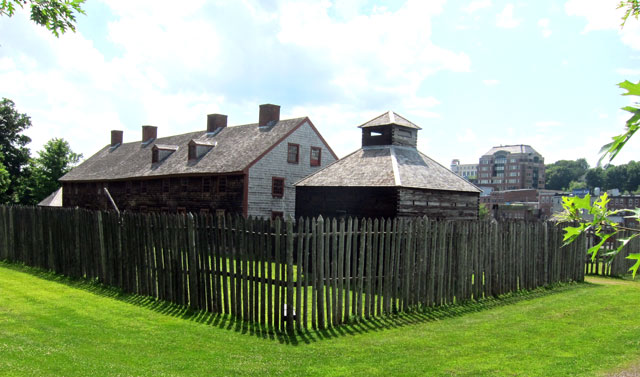 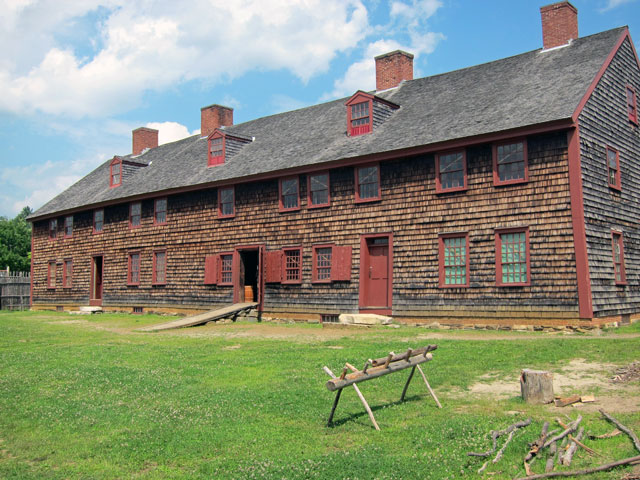 The interpretation of the fort is presented in its uses over the years.  You see a military section and orderly room, the old trading post, when it served as a colonial residence, and then as a tenement house. 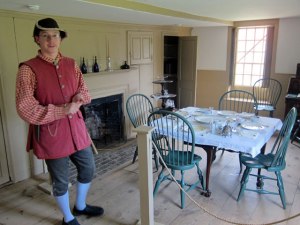 Docent in a room when the fort served as a colonial residence.

Leaving Augusta, I continued on Maine route 9 and US 202 towards Poland Springs.

You know my interest in the development of the summer vacation, and old summer resorts, grand hotels, and roadside Americana.  The Poland Spring resort ranks among the earliest in the country, dating to the 1790s, but there have been changes over the years. You also know of Poland Springs Water, which was first commercially sold in 1859.

I arrived, and first explored the Presidential Inn, built in 1913. 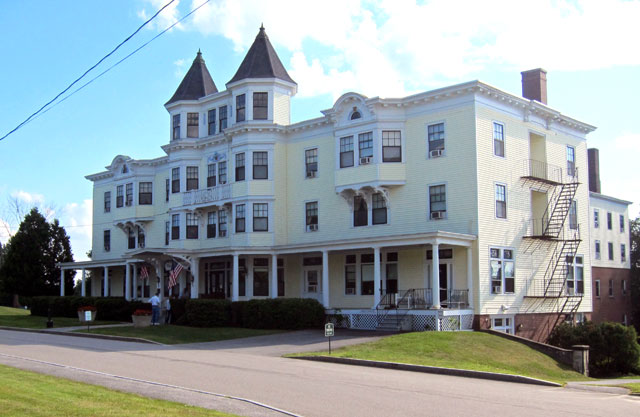 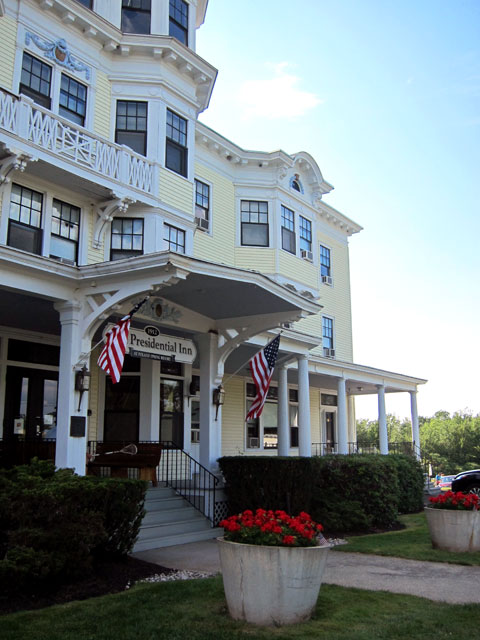 Going inside I was disappointed.  The only “old” appearance appealing to me was this part of the lobby, the rest were rooms, and peeking into one I was not impressed.  But I learned why later in reading the book that I, of course, bought. More on this later. 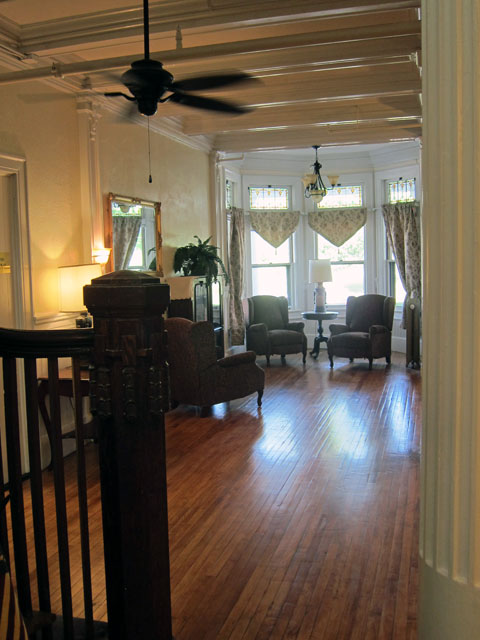 Lobby view in the Presidential Inn.

I drove up to the main part of the resort towards the Preservation Park museum passing these various history signs that you may enjoy reading (click to open the slide show, and each can be further enlarged):

In heading out the road to the museum, a wedding was just concluding in the chapel, and the door to the Maine Building, relocated from the 1893 Columbian Exposition in Chicago, was open (important point to remember).  I got to the museum to find it closed at 4PM, but took this image of the site of the first Poland Water spring. 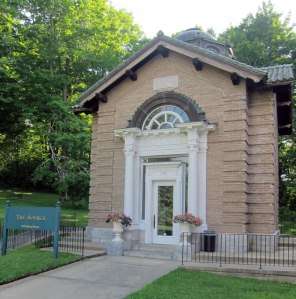 So I went back through the park up the hill to the chapel and Maine Building.  Walking to the building everyone was now gone and I saw the door closed.  But I went up to peer in the door, and turning the knob the door opened.  In I went, but noted that the unlocked deadbolt was keyed on the inside also — if locked from the outside I would be there for the duration.  When exploring the tower at the Atheneum Hotel at Chautauqua last year I saw that if the unlocked door I entered was later locked when I was inside that I could still unlock the door from the inside — important note for you intrepid explorers.

One of five remaining buildings from this iconic exposition (and the only state building remaining) this too had been on my list (you did not know that I am also an avid World’s Fair aficionado). An impressive building costing $30,000 in 1892, subsequently disassembled, moved and rebuilt here for $5,000, I was thrilled to be inside (even though after hours). 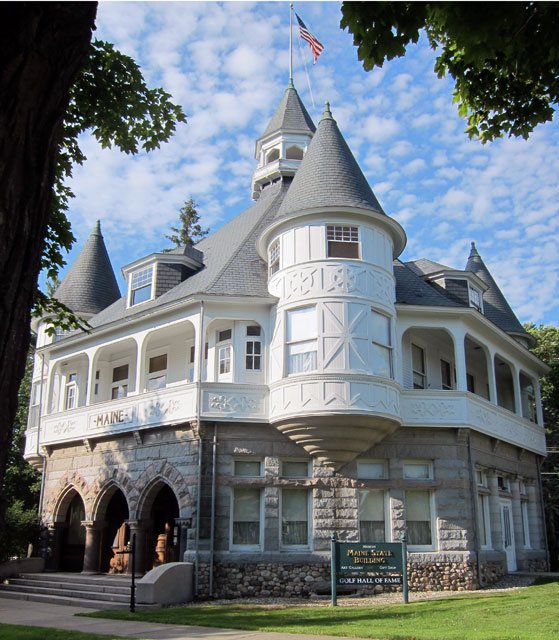 I was on the second floor in one of the exposition rooms and saw a lady locking the chapel across the street and head down the path to the Maine Building – I have uncanny timing. I headed downstairs, and as I heard the door open called out, “are you still open?”  Lynn (the wedding coordinator) was gracious, said she was locking up after the wedding and I could continue to browse, which I happily did, but respecting her time, I ran through.  What luck, thank you Lynn.  The image below I took as I entered the side door. 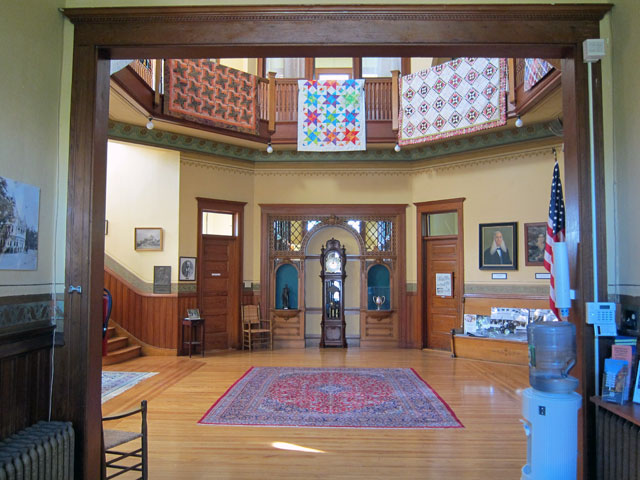 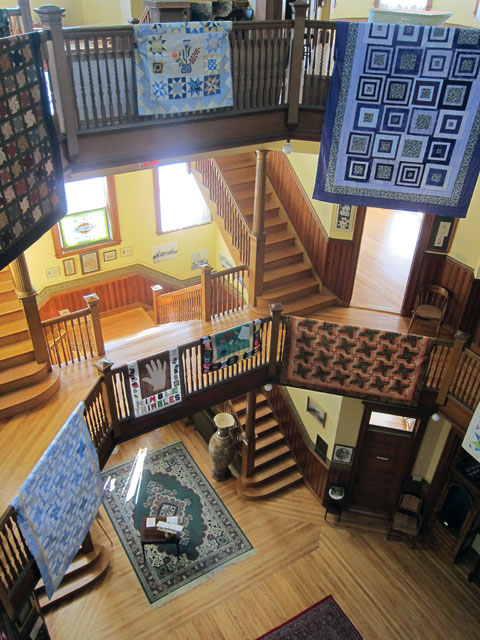 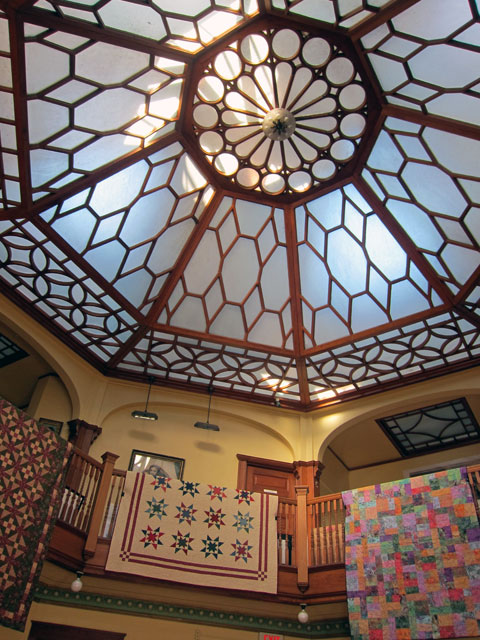 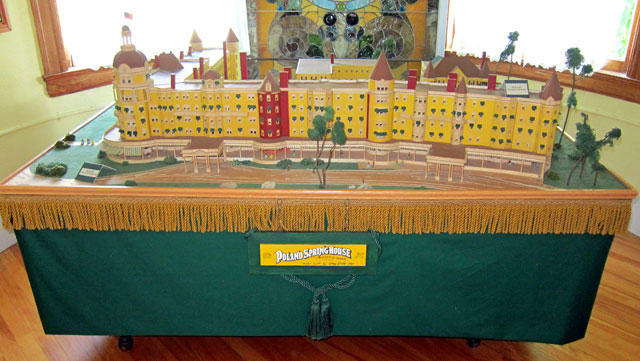 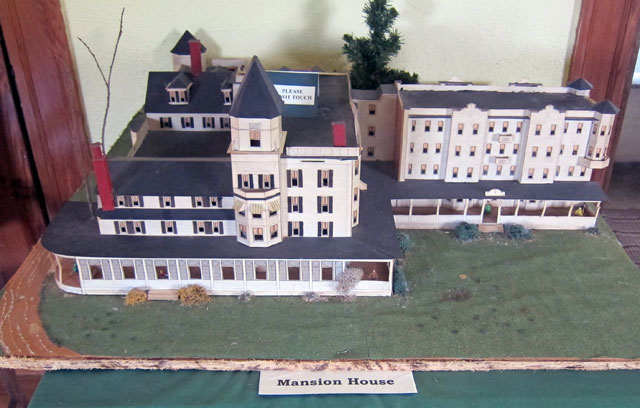 I then headed up to the Maine Inn, built in 1963.  Not my thing, but I was there so had to see it, and glad I did because I bought the book on the history of the resort which answered my questions as to why things were as there are now.

The grand portico on an otherwise two story motel, built in 1963. 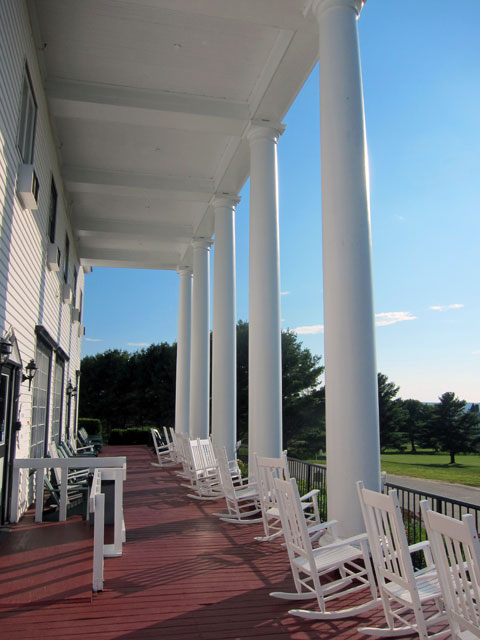 What I learned from the booklet I purchased and read is that for 160 years the original family ran the inns before selling in 1962 to Saul Feldman. He maintained things for 5 years, but in 1967 he turned the property over to the US government to utilize for the women’s training center for the Job Corps. That lasted for three years, and when the girls left in 1970 they left all the properties in shambles.  New owners arrived in 1975 with new ideas.  Renovations to the 1913 building created more rooms and now with baths – thus the modernizations inside.  The other main building was built in 1963 — both thus not what I cherish in the Red Lion Inn — but I understand now why things are what they are. The new owner’s approach is to provide an experience to the masses that is like what the Astor’s and Vanderbilt’s would have had, but not at the cost.  I like the grounds and amenities, but again I do not go somewhere to play golf, tennis or swim.  I approve of what has been saved, and many people were enjoying the experience.  It was new on the old grounds – not totally me, but I am so thrilled to have now been there and understand the history of this important place.

424 miles from 9AM to 10:15PM and I was back home.  Glad I came home because it ended up raining this morning. All I would have done if I had stayed at the Poland Inn Resort would have been to explore New Hampshire spots that I can day trip to.

So, I am back in “shunpiking mode.”  And based upon this past week, RAY RECOMMENDS:

3) Swing by and see and learn at the Poland Springs Resort.

I have no idea what is next, but something will brew soon. Yours, RAY