On Saturday, 21 September, I pulled out of the drive at about 7:20 AM and headed west.  Down I-91, exit 2 and headed west on VT 9 across the state and into New York.  FOLIAGE ALERT — I could not believe the beautiful colors on leaves already turning on the higher elevations on Route 9.  Pay attention, some beautiful deep reds, oranges — I just could not believe it about 3 weeks before we should see anything.  My first “cheat” for the day (in a need to make time and still have half a day exploring) was to take the new bypass around Bennington (I had only been on the part from US Route 7 west previously).  Arriving in Troy I crossed the Hudson on NY 7 and picked up I-87 south to connect with the New York State Thruway.  I know, UGH CHEATING, paying for a turnpike, no shunning and a $6.05 donation — but I had a plan.

I am headed to arrive at a program at Chautauqua, New York starting at 3 on Sunday, thus an overnight on the way.  The early start was the plan to arrive in the Finger Lakes area for four full hours to explore and learn.  Unfortunately I did not  spend the  planning time for this trip that I should have, but Seneca Falls jumped out as a place to explore.  At the northern part of Gayuga Lake, a canal via Waterloo to the west connects Seneca Falls to Seneca Lake.  I read of the Seneca Falls Visitors Center and Museum of Waterways & Industry, but the clincher was the IT’S A WONDERFUL LIFE MUSEUM.  Yes, the “real” Bedford Falls is Seneca Falls — but you just read the convincing story on their website.  (click second link for the story) 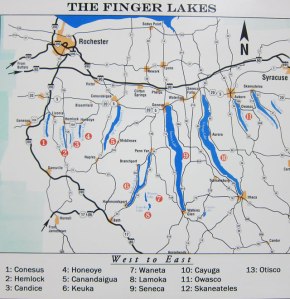 I exited the boring pavement of the NY Thruway for I-481 in Syracuse to pick up the “old route” US 20 to view some back road scenery.  On that route I passed the most pristine upscale village, Skaneateles, at the tip of Skaneateles Lake.  I arrived in Seneca Falls at 1PM, and first toured the Visitor Center and Waterways museum.  Fascinating history, I love to know why a town is where it is, and again it was the vision of a few

people establishing a town to take advantage of the water power.  Some major firms were established here.  Next I walked down to the small IT’S A WONDERFUL LIFE MUSEUM.  If you have ever watched the movie, you know it is the best, and watching had better be a yearly tradition.  I was the small museum’s first (and possibly only) visitor for the rainy day, and the enthusiastic host made me so welcome.  This is small mill town early 20th century personified.  George Bailey’s daughter, Zu-Zu, has visited often, and contributes to the now yearly celebration (conflicts with A CHRISTMAS CAROL, or I would go – well also conflicting is the Norman Rockwell Stockbridge, Massachusetts Christmas Street recreation — how can I do it all?).  She is a tad older than I am, and very charming (she was 6 when the movie was filmed in 1946).

In the rain I walked around town and crossed the bridge which may have given Frank Capra the inspiration to have Clarence stop George from jumping.  Then I walked up to the Woman’s Rights National Historical Park where I took in the video and toured the exhibits.  In July, 1848, some 300 women gathered at a chapel in Seneca Falls to hear the first formal demands for women’s rights from Elizabeth Cady Stanton and other area women.  The movie and exhibits really open one’s eyes to the subjugated life women held in the 19th century (and prior) and the overall changes that came about since that important meeting.  Take some time to learn about this.

Remember to click on any image to open the larger gallery

Karolyn Grimes who played Zu-Zu, George’s daughter (from the video there)

Looking across the canal at vacant mills, and the famous bridge

It could be this event that inspired Frank Capra to have Clarence stop George from jumping.

The rain not abating, I continued west on US 20 following the Cayuga and Seneca Canal (remember I love canals) to Waterloo.  I passed the Waterloo Memorial Day Museum, but then stopped and checked the internet for their hours, and called.  It was 4 PM and the fellow on the phone said he was just leaving (the website stated open everyday to 5).  “Oh, they have not changed that yet,” he said, “put please come, I have not had anyone visit yet today.”  And I did, to end up with an interesting one hour personal tour of the restored mansion with in depth Civil War and GAR exhibits.  It was  in Waterloo that on May 5, 1866, the first Memorial Day exercises were held honoring those who had lost their lives in the War Between the States.  Previous celebrations were welcoming home and commemorating those who fought.  Those giving the ultimate sacrifice had been overlooked.  A wonderfully documented tale, and on the 100th anniversary a resolution of Congress officially recognized the town as the birthplace of Memorial Day.  Lots to learn here, the tour was nice, but the lonely and chatty historian would not stop sharing and let me read all the panels.

Down Route 96 then to Interlacken and my B&B.  I do not understand the high prices in this area, and also the lack of accommodations (thus the high prices, I guess).  But my innkeeper is friendly and the room large and clean — just not the authentic 19th century ambience I am used to, especially for $150.  But her recommendation to have  dinner down the road at the Americana Winery’s cafe was fabulous.  Wish I could have had all the meals that passed by me, but my Salmon Salad was just right.

So, it is Sunday (early still)  I will prepare yesterday’s images for upload, and work on my route for my remaining 3 to 3 1/2 hour drive at breakfast.

Departing about 9:30 I took 96A (check your maps) west to 414 turning south with Seneca Lake to my right.  It is impossible to throw a stone on 414 without hitting another winery and/or its fields of grapes.  Beautiful scenery eventually leading down to the lake.  This is what the Finger Lakes is all about.  To be truthful, many of the NY town and cities names I have always heard I have not placed on the maps in my mind.  I forgot that Ithaca was just south of me (been there once over 40 years ago), and to my pleasant surprise Watkins Glen is at the foot of

For Scott and Rich

Seneca Lake with Corning about 20 minutes further south – the way I was headed to then cut west.  Watkins Glen was cute, a little campy reminding me of Lake George, NY, but probably because of the race track there which evolved from Watkins Glen being the spot for the first road races in the US.  I stopped briefly at the Watkins Glen State Park seeing the cuts into the rock, but then drove out of town, up, up and up a country road to the race track.  What views.

Continuing south to Corning to pick up back roads west I said, “dummy, Ray, you are here, the Corning Glass Museum is here, so STOP.”  And I did for over two hours.   This video tells why the museum is here (the few seconds of the beginning are at the end – I started late)

World-renowned  (I have even sold books to their research library) and worth a stop.  I had no idea that such wonderful work was artistically done in glass 1,000s of years ago — and it is all on display there.  Being of more recent mind, I found the exhibits on US glassworks and developments of most interest.  But, believe me, I did not scratch the surface, and you can easily spend a full day there — I will go back.

Some images from inside the museum

An early machine to “press” glass.

I have always liked early lighting

But, checking WAZE on my IPhone I was still 150 miles away from Chautauqua, and felt the timing would not be right for the back route I was thinking about, plus there really were no towns along the way to explore.  So, I hopped on I-86 (at least free, so not really shunpiking – no I am fooling myself – I cheated again), and arrived shortly after 4 PM for checkin at my program here.

The view from my window

I will spend more time filling you in on the history of this special place, and my long-term interest and the impact on my life, but in closing I will just share some images with you of the Athenaeum Hotel, built in 1881.  If you know me by now, you know why I wanted to come here to experience the hotel, the grounds, and the experience.  Talk to you in a couple days, as always, yours, RAY 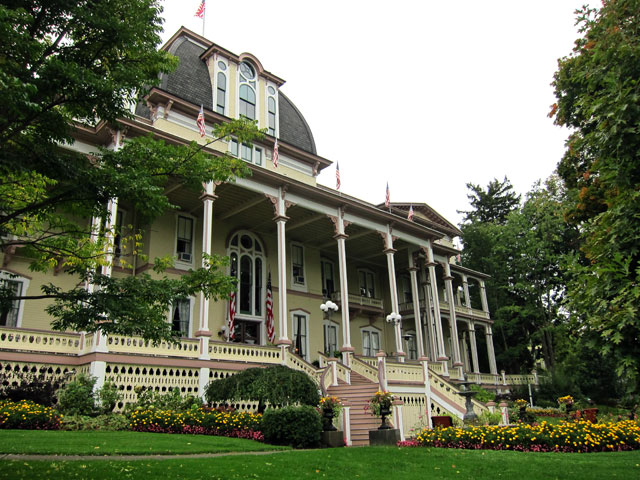 Chautauqua will be a photo taking delight for me: Victorian, architecture, early summer resort — here is a taste to come (remember to click to open up)

From porch outside my room