Yes, I know, I am late getting this post to you.  But remember I write for my own memory sake, but also to share.  The difference here, and advantage to you, is now I may not be so verbose, maybe.  So, get out your Vermont map!

This trip was prompted by another fantastic 50% off TravelZoo promotion, this time for the Middlebury Inn in Middlebury, Vermont.  I had stayed there before, but could not pass up two nights to re-explore the area (remember that staying in one place for at least two nights allows that day in between to explore more relaxed without having to move – you also get to enjoy the Inn or B&B more).  I found that this time in repeating my routes on the west side of Vermont I purposely got further off the routes I was most familiar with, and that one discovery and question lead to another.  Prime example, I found totally new things (to me) about Vergennes when I hopped over one road back from the main drag.  Doing so, I not only saw the correct side of the falls under the bridge, but discovered the Northlands Job Corporation Center.  I said, “Ray, that sure looks like an old state institution.”  Remember, one thing or question leads to another.  Some googling and I learned the facility began as The Vermont Reform School in 1865 becoming the Vermont Industrial School in 1898 and the Weeks School in 1937.  Closed in 1979, the site eventually was reopened at the Northlands Job Corps Center of the US Department of Labor.  But, as I said, one thing leads to another and in my search I discovered information on the Vermont Eugenics and Sterilization Program.  You may want to click on the link and learn more about the recent past we grew up in.

So, now to your map.  My plan for the journey to Middlebury was “out of the way” via Barre and Montpelier since I wanted to see the Vermont Historical Society museums.  I-89 always feels like I am going north (look at your map) even though it is an east-west route (odd numbered, but hopefully you know that).  I exited on Exit 3 to Shunpike a parallel old road – VT Route 14.  Lovely farm road, but you don’t have to go that way unless you would like to see the East Bethel, VT Church built in 1824 and the Octagon Library next door.

First stop was in Barre at the Vermont Heritage Galleries at the Vermont History Center.   This is a lovely old building with the research library on the second floor and three small exhibit areas on the first floor.  Glad I stopped, but you do not need to make a special trip unless in Barre anyway.  Barre, yes built mostly of granite, for some reason did not impress me as much while driving towards Montpelier as it did when Cathy and I visited years ago.  BUT, Montpelier deserves your full day of attention.  I had only stopped before while traveling through to catch a meal and quickly browse shops.  My plan was to go to the Vermont History Museum, but as I was leaving town, my neighbor Dave (who grew up in Vermont) said, “Ray, visit the State House.  Every year while growing up our school our classes went, you will love it.”  And I did, and did.

The façade of the Vermont History Museum is a 1971 reconstruction of the Pavilion Building built as a hotel in 1876, and called the Pavilion. While a hotel, the Pavilion served as a home for many of Vermont’s legislators.   I enjoyed the museum and learned a great deal, and will tour again someday. From there I stepped next door to the Vermont State

House just in time to catch the 3PM tour (free).  The half hour tour lasted almost an hour with a fantastic docent.  Over a 20 year period the interior was restored to its 1860 appearance when it was built, the third State House built on that spot.  Much of the furniture is original. We spent time in the governor’s office and I enjoyed seeing the Constitution chair made of wood pieces from the USS Constitution, Old Ironsides, and the largest assemblage of wood from the ship outside of the ship.  The original library is now a reception room, where the 20 by 10 foot painting of The Battle of Cedar Creek is the largest painting in the state.  The State House is fantastic, and a tour a must!

Remember to click on any image to start a larger slideshow

Front Porch of the Pavilion Building

Fossil in the marble

THE BATTLE OF CEDAR CREEK depicting the Vermont Regiment

Ethan Allen statue outside. There is no know image exisiting of Ethan Allen.

But it was time to cross the rest of the state going up and over the Green Mountains.  I headed down VT 100B to Route 17 through Waitsfield (a must visit Mad River community) and then climbed through the Appalachian Gap (elevation 2356 feet).  Sign leaving the Mad River Glen Ski Area said, “not recommended for buses, RVs and trucks in winter.”  Well, those vehicles, as well as cars, should even give a second thought in summertime too.  I have never seen such grades going up, and then you have to go back down too – no runaway brake escapes!  Then I picked up Route 116 (through Bristol, also nice) to

Middlebury, and The Middlebury Inn.   Checking in I again got an elegant and large room in the Porter House Mansion next door with a comfortable porch I again enjoyed, followed by a nice dinner in their Morgan Tavern dining room.

Thursday, 5 September, the plan was to head north on my favorite US Route 7 towards Shelburne and then cut west to work my way back to Orwell and Mt. Independence, but first I explored some in-town Middlebury roads, new to this shunpiker.  In the VERMONT VACATION GUIDE magazine I saw two stops before Shelburne.  I took in the Dakin Farm foodstand  (worth a quick visit) and then The Christmas Loft in Shelburne (well, I did stop at one of the only remaining antique

Street scene at The Christmas Loft

centers also).  I really enjoyed The Christmas Loft, and all its “eye-candy.”  The Shelburne Museum deserves a day plus to do it justice (Cathy loved it, and I have been back once since four years ago), but I just wanted to visit the gift shop and browse the books.  WHAT A DISAPPOINTMENT, they must have gotten a new “bad” buyer for the shop, who does not know books.  In the past I have spent hours looking at the varied and unique titles, but the book section was trimmed to “bare-bones” and consisted of mainly Schiffer Books titles – not even the histories of the museum or of its founder, Electra Havemeyer Webb.  I have nothing against Schiffer Books, in fact Cathy and I worked with the owner to produce two books which featured Cathy’s collection of Kenneth Jay Lane fashion costume jewelry.  The shelves just did not hold what they had in the past.  A less than ten minute browse and I was headed south on US 7 to pick up a back road towards Shelburne Farms.

Arriving at the farm, I turned right on a road out to the point on the lake and got to see the shipyard where the steamship Ticonderoga which is now in the Shelburne Museum.  Heading down US 7, I turned into Vergennes.  Even though years ago we spent a night there in a B&B, I cannot believe how much new I saw and learned including the Job Center that I mentioned earlier, and the basin where the shipyard was located building vessels for the War of 1812.  I enjoyed eating a sandwich on the town green.

A Christmas Village in the shop

Light display at The Christmas Loft.

Site of the Shelburne Shipyard.

Looking back at the falls. Previously I had only been on the road atop the falls.

Pumphouse of the falls looking towards shipyard site.

Mt. Independence Visitor Center built in the shape of Bateau – the type of boat used on the lake.

Points of interest including bridge built by the Americans

Then it was VT 22A heading south to Orwell.  Vermont, as is New Hampshire, can be defined (I feel) in several separate regions, totally different “states” in fact.  One may think, “Vermont – Green Mountains” but the west side of the state bordering Lake Champlain is a fertile and flat valley with the majestic Green Mountains to the east, and the towering Adirondacks to the west on the other side of the lake.  I had visited Mt. Independence in 2009 which is opposite Fort Ticonderoga, and I mentioned it on my recent visit to the Hubbardton Battlefield site.  I needed to visit again to reinforce my understanding of Revolutionary War events in our area.  I got back to the Middlebury Inn at 6 PM and after more reading on the porch and sitting in the lobby I dined again in the Morgan Tavern (named for the horse, made famous from the Vermont stock). 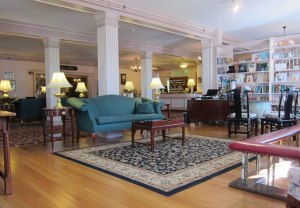 Middlebury Inn lobby from the spot I “staked out”

south on US 7 towards Brandon.  I spent two hours covering the 16 miles separating the two towns stopping at shops and detouring to Lake Dunmore for the first time.

I had wanted to explore Brandon having had dinner years ago at the famous Café Provence.  A stay at the historic Brandon Inn is on my list, and I toured myself through the Inn.  My walk of the town then commenced heading north to the Stephen A. Douglas museum and welcome center that I had never seen before.   Well, no wonder, it opened in 2010, and I had not been north of Brandon on this section of Route 7 in maybe 5 years.  This is one of the smallest museums I have been in, but also one of THE BEST.  I took well over an hour in the two exhibit rooms learning about Brandon, Douglas and his debates with Lincoln, and the slavery issues.  About 3 I headed south on US 7 through Rutland down to Manchester Center where I headed east on VT 11 towards home.

Great antique shop on US Route 7 – just part of the former cow barn.

And in the house, “office” antiques.

Since returning I have been watching the days fly by, busy constantly, and wondering at the end of the day what I accomplished (lots!!!).  But this post was late as I worked on paperwork, projects and a new website for our upcoming Corn Maze – please visit http://walpolecornmaze.com/

1) Plan to spend an enjoyable day in Montpelier, Vermont

2) Spend at least 3 hours in Brandon, Vermont plus a meal at Café Provence