Sign from the 1950s when a gentlemen started plotting the road

I had no plans for today, I had planned it that way!!!  But, last evening I read Wednesday’s  weekly The Vermont Journal/The Shopper newspaper.  A headline caught my eye. “Military Road Car Tour at Hubbardton Battlefield Aug. 24th”.  I told BLACK BEAUTY. “Wash me and fill my stomach,” she begged.   And I did.  We turned in early to be refreshed to depart at 0730 to ensure arrival in time for the 0930 orientation.  Upon waking it was about 43 degrees so I wore a windbreaker over a jacket and put gloves on.  BLACK BEAUTY stayed a cool 185 for the 65 mile plus trek over.

It was about this time in 2008 that I visited Hubbardton,  the only Revolutionary War site in Vermont (remember that the Battle of Bennington was fought in NY State as reported to you in my last post).  When the Americans were forced to abandon Ft. Ticonderoga and Mount Independence they retreated down this Military Road from Lake Champlain, but the British caught up and engaged the Americans here on July 7, 1777. The battle lasted from about 5AM to 8:45AM with the Americans retreating further south, only to engage the British again on August 16th at the Battle of Bennington.  Although short in duration, and not overwhelmingly decisive for either side, the delays caused by these skirmishes to the advancing British enabled the Americans to gather strength for eventual victory at Saratoga – the Turning Point of the Revolution. 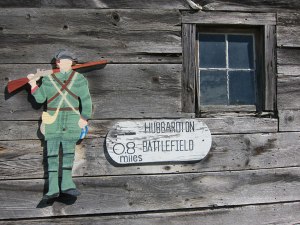 Hubbardton Battlefield is a small hill with interpretive trails through the fields.  The exhibits in the small visitor center are well done, and Carl has staffed the center for the past 27 years and can fill you in on most any detail (he even remembered me from my last visit).  The tour director was Jim Rose, president of the Crown Point Road Association.  Crown Point Road was built during the French and Indian War time period from Fort No. 4 in Charlestown, NH to Crown Point on Lake Champlain.  Today’s tour was a road built by order of Gen. Horatio Gates in 1776 to connect Mount Independence on Lake Champlain to the Crown Point Road in Rutland.  I had no idea what to expect, but it sounded like fun.

There were about 12 of us, and following a short talk we car pooled to travel to various spots.  I joined with Tom and Sylvia.  Tom was commissioned in the Navy the year after me, and spent a career in aviation.  After a short while he realized that he recognized BLACK BEAUTY (and me) from THE CRUCIBLE performance at the Fort at No. 4 two years ago (small world).  There were really no extant sites to be seen, just a few markers, but Jim provided wonderful insight as to the whys and wherefores of the road, the battles, etc.

Our caravan at a stop along the way.

Site of Fort Warren in Castleton – a Northern most fort for protection.

And we stopped a cyclist to take a group shot at the Fort Ranger monument on the Crown Point Road.

Everyone had something to share, and again the experience (in retrospect) was with being with others with similar interests and desires to learn.  The four and a half hours were over before I realized it.  I have lots of notes of things I learned, and another page of things I want to learn about.

After 2PM we returned to the visitor center and all departed.  So, if you haven’t gotten your maps out yet, now is the time.  I asked Carl for a recommendation for lunch, and he suggested the classic dinner in Castleton.  But I have eaten there in the past, and this summer I have been searching out unique roadside stands (you know I love finding small delis or small mom and pop restaurants too).  I got back to Castleton and headed west on 4A before turning south on Route 30 towards Poultney.  In the past I have always approached Poultney from NY22A, so this was “new territory”.  Did I “strike gold” when I pulled into Flanders Farm Stand and Snack Bar about ½ mile south of the intersection of 4A and Route 30.  I pulled up to the snack bar, and seeing an ice cream sign asked if they had food too. “Yes,” the fellow at the table replied, and I got out.  Well, Paul Flanders and his wife and two children have just started their stand and snack bar to sell their farm products (they have been farming for ages).  I sat down at a table with him and Mrs. Comstock (age 87) and learned about his varieties of tomatoes, peppers, lettuce – and the quantities he produces is amazing.  “Not worth doing something unless you do it right,” he told me.  Not cooking burgers at home I have tried to get them at these road side treasures.  But Paul said, “try my Flanders Deluxe Bacon Cheese Burger, with our own

I could not wait, so good I forgot to take a shot before I started eating

peppers and onions and my special sauce.”  I said, “sold.”  Mrs. Comstock and I philosophized about life while he was cooking, and when he brought my plate, I could not believe it.  WOW – Ray Recommends – MAKE THE TRIP and see Paul and his family!! I wish them the best of luck!!!

Paul and me in front of his Snack Bar. Make sure to stop!!

Arriving in Poultney (always charming), I headed east on VT140, again a “new road” for me.  East Poultney came first and is charming.  I passed through Middletown Springs and arrived in Tinmouth where a sharp left turn must be made to continue on 140 to Wallingford on my favorite US Route 7.  Timouth is amazing, and I arrived as the chimes where playing on the green.  The views towards Darby Mountain are too much.

Chimes were ringing as I arrived in Tinmouth.

The old Town Sheds with original carriages and wagons.

View of Darby Mountain from the village of Tinmouth

Tinmouth Town Offices in the old store, and firehouse

And then as I left town I came across some of the most fabulous views in Vermont – views which the tourist will not see because there is no reason to be in this area – unless you are a really true shunpiker.

Crossing US Route 7 in Wallingford the road continued to be a thrill through East Wallingford.  Once reaching VT103 I headed back through Ludlow, Chester, stopped at the Rockingham Vermont Country Store to graze, and tucked BLACK BEAUTY in shortly after 7PM.  Pretty good for a day I wanted to “do nothing.”

RAY RECOMMENDS: Get out and explore Vermont’s little roads.  Tinmouth deserves a picnic on the green, and Poultney and Castleton, both with colleges, have much to offer in a small town environment.  And, by all means, take in the Hubbarton Battlefield.

6 Responses to HUBBARDTON BATTLEFIELD, VERMONT and other EXPLORATIONS – Saturday 24 AUGUST 2013