For about six months I have wanted to start another column in THE WALPOLE CLARION sharing SHUNPIKING WITH RAY experiences close to home with recommendations for day trips.  The best way to get something done is to begin, so yesterday I wrote my first CLARION Shunpiking piece, but then realized I should expand it a tad and share it here too.  I have a category “Day Trip Ideas” which I have yet to develop.  I need to start listing things there, add links, and then my experiences.  So much to do, yea!!!  So, here is my introductory paragraph for my CLARION article followed by what I wrote, but expanded for you here:

For a number of years I have shared my travel experiences in my on-line travel “blog” SHUNPIKING WITH RAY.  In my quest to learn from others, I have often found locals are unaware of or have not visited historical, educational or fun attractions nearby.  Here I hope to tell you of area treasures, encouraging you to explore and enjoy.  For a start, let’s begin next door in Alstead.

This year is Alstead, New Hampshire’s 250th anniversary, and I recently read that there would be a town-wide tour of homes, historic sites, churches, the museum, and Chase’s Mill on June 22nd.  I had to see the mill at a minimum so mid-week picked up my souvenir booklet ($5) that includes maps and tour details to prepare myself for Saturday’s touring.  Chance of rain was 30% but BLUE BELLE reminded me that we just had to stay in the other 70% of the area, and in fact all was fine (her top has not been up in over 20 years).  We cruised over March Hill Road to pickup Pratt Road to Alstead Center to eventually traverse Camp Brook Road to Mill Hollow prior to heading back down Forest Road (Rt. 123) to Alstead Village or Paper Mill Village.  BLUE BELLE enjoys kicking stones on dirt roads, and if you don’t you are missing something, or need a “sports car.”  I had so much fun, and learned so much I will have to write a complete travel “blog” post, particularly to mention all the gracious folks I met along the way on my five hour tour fifteen minutes from home.

Entering quiet Alstead Center is stepping back into the 19th century without the assistance of imagination. This is the original settlement of Alstead, and about one-third of the

Walls and ceiling with embossed tin (hard to see here)

original buildings remain. I first gazed on the fascinating all decorative tin interior (circa 1905 – and worth the visit) of the First Congregational Church (third church on this site) where I was encouraged by my hostess to visit her daughter’s Amos Shepard Tavern B&B across the way.  Ann and Tim painstakingly spent over three years restoring and accentuating the architectural eye-candy within the building’s walls and now operate it as a B&B.  I have now decided I do not need to travel hours for a grand B&B experience, I will soon just go

over the hills for a night – actually two centuries – away.  Next it was down scenic and dirt, Camp Brook Road for Chase’s Mill at the foot of Lake Warren.  Since 5th grade, when I made a waterwheel for a science fair project, I have had an affinity for waterwheels and old mills. And, when Ray Boas, Bookseller was in New Preston, Connecticut, the shop was in an old cider mill with my office on top of the waterfall.

Dan greeted me outside the mill, and then I was fortunate to have Margaret Chase tour me through all three levels. Dating from 1917, this is the third mill built on this foundation.  Her Dad, Heman Chase, operated a woodshop here giving lessons to area children in the 1960s and 70s using water powered equipment which is still extant and operational.  The flood of October, 2005 did knock out part of the metal culvert to the turbine, but otherwise the mill has been untouched for decades.  The newly organized Mill Hollow Heritage Association is endeavoring to restore the mill and

create a working museum, and “voting with my dollars” I am now a “friend” of the organization.

A stop at the 2nd Congregational Church in East Alstead was next where I was told of the architectural changes over the years; such as creating a full second floor sanctuary which originally was an open balcony with pews.  Next I drove around many of the other sites before parking at the Vilas Pool.  How many times have you passed on Rt. 123A, but not toured the pool’s grounds?  A gift to the town from Charles N. Vilas, Vilas dammed the Cold River to create the facility which opened in 1926 complete with swan boats similar to those used on the Boston Commons.  The Vilas Pool, its buildings and grounds are a gem of a well-kept secret. Popularity waned I understand, but nostalgia is bringing it back.  New caretakers have done a wonderful job 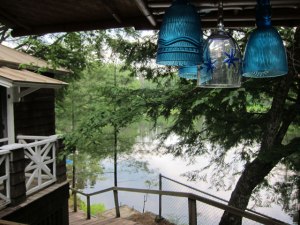 Looking out at Vilas Pool

making it so inviting under the tall pines.  Researching last night I found the Facebook page for the Pool (with 507 members), and “Liked” it so I would know what is happening.  Perfect place for an afternoon picnic and book or two, cannot wait.  Well, it is time for you to visit too, and July 13 will be a special day there, and I understand that the Carillion (built in 1930 with twelve bells and at the time the second largest in New England) will be played for the first time in many, many years.

My final planned stop in Alstead Village itself was at the former Universalist Church, now the Alstead Historical Society.  Bruce Bellows spent a great deal of time with me telling me about the renovations to the building acquired by the town in 1971, and sharing the collections.  I particularly enjoyed the “upstairs” which was like visiting a well-preserved attic.  I know I was born in the wrong century.

Inside the Inn – main carrying beam (left) is 38 feet long

Mill models made by Heman Chase

Foot bridge entrance over the dam to Vilas Pool

Gazebo under the pines – Vilas Pool

The “Sestercentennial Town-wide Tour” will be held again on August 3rd and September 21st, with “Vilas Pool Day” on July 13th.

1. You buy a copy of the Alstead, NH 250th Anniversary Booklet and take the tour.

2. You plan an outing at the Vilas Pool

3. You become a member of the Mill Hollow Heritage Association ( millhollowheritageassoc@gmail.com ) to assist in preserving Chase’s Mill

4.  You plan a centuries past getaway at The General Amos Shepard Bed and Breakfast, although it is but a 15 minutes drive away.