“The question is not what you look at,

but what you see.”

Currently I am having fun staying with Alex and Lisa while David and Mari are vacationing at an island resort in the Philippines after attending a conference in China.  As an extra bonus, Gary (number two son) is also here until he moves into his historic condo this coming week.  I have been fortunate to have had Alex “watching duty” before, and it is always a treat to walk Alex to school and pick him up when his after-school program is done.  Often when visiting I have had time during the school day to explore new areas (in September 2011 I delved into Concord one day, and the mills in Lowell the next)  During this five day stay, however, only two are school days, so limited exploration time on my own, but you know my itchy feet.

On Friday the 24th I had no plans in mind for the day until meeting Alex at 2:35 at school.  So after walking him there I began reading area literature I brought with me from my collection, and then I checked TripAdvisor on-line, where I was reminded of the National Historic Site – Saugus Iron Works  which (after checking Google-maps) I found was just 9 miles and 25 minutes away – perfect for the four plus hours I had ‘till the school bell rang – and this site was “on my list.”

I got into the car and off I went with the map on my IPad’s screen, and the Iron Works audio tours downloaded into my Iphone,  It was basically a straight back road shot, but I did something wrong and soon found myself too far south.  When checking the map on my Ipad, something went amiss and the map vanished (has happened before – really no way to save a map, but more on this later).  So, what do I do I ask myself, and I replied, “Maps App on my Iphone.”  So I pulled over, let it ascertain my position, entered my destination, hit directions, and found a route to Saugus.  “Now I just have to carefully read,” I said to myself, but then I saw a button I had not realized was there that said ‘begin.’  I tapped it and a GPS voice began to recite the directions, and off I went.  Wow, this technology is great, and soon I was in the parking lot at the Saugus Iron Works, only 38 minutes later than I should have been.

Waterwheels have always intrigued me since a 2nd grade painting I did followed by a 5th grade science project. I have also been fascinated by our colonial iron works, but never understood the process – BUT now I do !!!  Since I got “lost” on the way to Saugus (but I got to see Melrose, Malden and Revere along the wrong way) I only had about an hour and a half at the iron works, but have now spent almost the same time on their website which even includes a film on the 1950 archaeology dig on the site.  This dig and study revealed the details of the 350 year old site (dating from 1646) of the first successful, integrated iron works in the New World, and enabled the accurate recreation of the site providing the best interpretation (in my opinion) of how the ore is turned into cast iron, and then wrought iron, and even into bars and rods to be made into nails.  I finally learned the difference between cast and wrought iron.  What comes out of the furnace is cast into molds in the sand, and then those bars can be hammered into wrought bars.  In that process the “fibers” in the iron are aligned giving the iron additional strength.  In the next few images I will outline the process. The Saugus Iron Works National Historic Site is small, manageable, and packed with comprehendible information (just follow this link to learn how to get the audio tours free from Itunes)

I  began the tour with the 12 minute introductory video (also on line) which is what I always do at a historical site and highly recommend as the way to begin wherever one is offered.  I then toured the site with Iphone to listening to the audio tour.  From time to time I also listened in on a ranger explaining things to a school group. 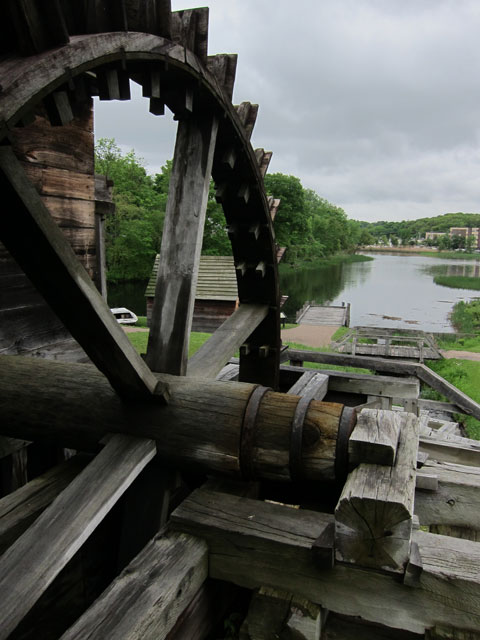 An Undershot Waterwheel. One of five waterwheels at the “works.”

The bellows at the furnace driven by water power

Above is an undershot waterwheel, one of 5 wheels at the works to drive bellows or machinery to forge the iron and then to make bars or rods for nails. In the background is the tidal basin allowing for the shipping of the finished iron.  Water from a mile away powered the water wheels which are sited below a bluff allowing for more power from the falling water – a perfect early industrial site.

Left – Massive bellows in the furnace to stimulate the intense burning and heat needed are driven by the cogs on this 3 to 4 foot diameter axle on the water wheel.  Within these early 17th century structures it is an absolute delight to see the utilization of what we called in 5th grade science as the “six simple machines.”

The axle on this wheel raises the 500 pound hammer to then fall on cast rods to turn them into strong wrought iron.

This is the opening at the bottom of the furnace where the molten iron is drawn out flowing into the sand to make bars to be later wrought, or into molds for firebacks, pots, or other cast implements. 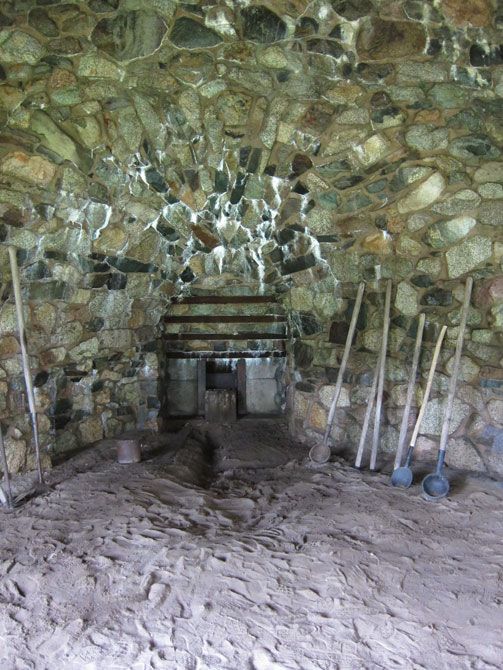 Bottom of the Blast Furnace where the molten iron is drawn off.

The iron making process was carefully explained in the small museum.  Also on display were artifacts found during the excavations in the early 1950s including wooden parts from one waterwheel and building – carefully preserved underground for 300 years.

On Saturday the rains continued keeping us inside.  Alex’s friend called asking him to a late afternoon movie, so Gary and I took the opportunity to hop in the car to explore the Balmoral Condominiums in Andover, Massachusetts (about 15 miles and 20 minutes north of David) where he just signed a lease.  He had not learned the history of the building, but we soon were immersed with learning – with me taking the research lead (you know me by now).  The Shawsheen Village area of town was built as a utopian factory village by William H. Wood as his headquarters for the American Woolen Company.   Needless to say, I have immersed myself in learning additional history (on-line) about the textile industry in the area and Wood’s importance including the Textile Strike of 1912.  Last month Gary and I explored Newburyport to Ipswich and environs.  I never did get to tell you all about that area, but it was great to fill-in this part of the map, and I will get back to Ipswich soon and share that with you.

Well, another rainy day inside today Sunday (Alex loves to stay home on the weekends), but I will close now and play with him (and Gary) and read. Oh, and what I promised to tell you – how to save a map on your IPad.  Press down on the sleep button and the Home button simultaneously. You’ll hear a click as it captures the screen. Do this for as many maps as you want to save.  The screen (map or any screen image) is captured in Photos and there is the map when you open the photos folder.  I even found that I could enlarge the image for more detail.  Great hint, great way to save maps for when no Wi-Fi is available – and I love maps.  Let the screen saving begin.  Bye, and thank you for reading and learning and seeing, yours, RAY