I will try to be short (who, me?) because uploading my posts via satellite is hard due to the two way delay, and as you may have seen from yesterday’s post I could not position images creatively as a result and when I found a duplicate image this morning and tried to edit the post it ended up wrong.  Hey, there are more important things in life – for example sitting in the Commodore Club (very few people know how lovely it is), a glass of wine, my own appetizers, and views across the bow as we set sail from Bar Harbor at now 6 PM as I begin writing.

This morning (Monday ??) I was almost the first on a tender ashore arriving before 9AM.  My “Grand Tour of Bar Harbor” with lobster lunch began at 10:30, but not wanting to lose any time I left the ship before the tour was supposed to meet (I had told the tour office I was doing that).  For whatever reason I was too busy to really plan my shore excursions on this voyage properly, so I selected this guided bus tour to gain the maximum overview, but I now realize I could have done better (time and cost wise), but an overriding factor was not wanting to miss the last tender back by any miscalculations – so worth the trade-off.

I headed up Main Street of this lovely Victorian Village.  A disastrous fire in 1947 almost devoured the town too, but the winds changed in time, thus the downtown survives, but three grand hotels and over 60 millionaire summer homes were lost forever.  I traversed a few side streets came down to West Street with its mansions, and walked down Bridge 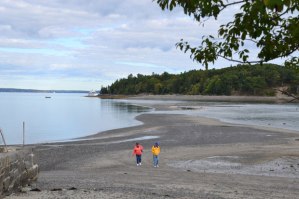 Street to the water. Named Bridge Street, I would guess, because at low tide the Bar Harbor Bar is revealed allowing you to walk across the bottom of the ocean to Bar Island for an enjoyable hike – but watch the tides so you don’t get stranded.  It was then time to join the ship arranged 6 hour tour, which knowing what I know now I would not have done.  It included a one hour lobster bake that lasted two hours due to the inefficiency of the lobster bake house.  I had a whole lobster on Star Island earlier in the month, and now that I have wrestled a second I don’t think it worth the effort.  Lobster in other dishes is fine – but whole lobster (sorry) is not my thing.

The history of the development of Acadia National Park, one of the ten top most visited in

the US with over 3 million visitors annually, is exceptional and due to the insight of wealthy landholding lovers of Mt Desert Island and John D. Rockefeller, Jr.  Prior to lunch we bussed to the top of Cadillac Mountain, the highest point for the wonderful views of the Maine Coast, and after lunch we worked the loop road seeing Sieur de Monts, Thunder Hole and Jordan Pond.  Our guide on the bus was a retired Park Ranger with 30 years at Acadia, and thus very informative. For example, only 1 % of the Maine coast is accessible to the public, and 25% of that is at Acadia National Park

The tour was a good introduction to the area.  At  first I thought I need not return here, but as I thought about the day I would like to visit again.  To see the area I would recommend one of Oli’s Trolley Tours for an overview ($29), or the free Acadia Shuttle Service that has many different routes, and the perfect way to see the park getting on and off.  Accommodations are plentiful, and the guide said the best times to avoid are 4th of July and August.  June is not busy, but weather can be iffy.  There really is a great deal to do in the park, particularly for hiking, I was just not prepared and there was not enough time – days should be allocated with a good start at the main visitor center which I did not get to visit.  There are extensive programs in the park, including evening lectures by the rangers (hint Scott and Betty).  And then there is the coast and ocean with many kayaking opportunities. 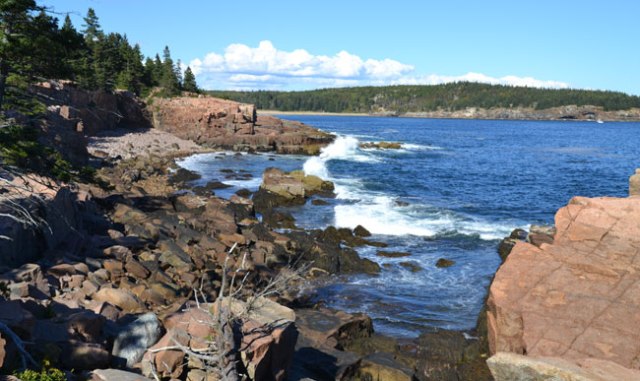 The Maine Coast in Acadia

Again, I have no idea where today went, but I learned a lot for a future journey to the area.  What I may do is come visit here and then take a ferry to Nova Scotia. But, I also want to go to Nova Scotia by train so I can say I have travelled coast to coast in Canada by train – oh, the decisions I have to face.

Tomorrow is Saint John, NB, next day Halifax, and I will give you an update once I have visited both.  This really is a “If it’s Tuesday it must be Belgium” but without the packing, unpacking every day. Thanks for reading, as always, yours, RAY