A THREE HOUR TOUR – But, No Skipper, Professor, or MaryAnn

This weekend was the big “British Invasion” car show in Stowe, VT, but I again opted out. I always enjoyed car shows growing up with my Dad (he was a well-known car buff), 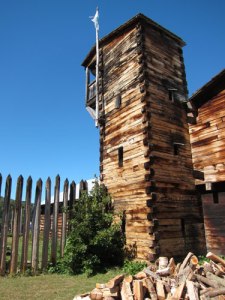 The Fort’s tower and fenced area

but somehow “old cars” to me are 1930 and older – the newer stuff does not really grab me, but I love driving Black Beauty (Triumph TR3A) and Blue Belle (MGA).  Cruising down back roads instead of parked in a field, now that is a different story.  This weekend I have been working at home in the shop and on my laptop, but planned to head up to the Fort at No. 4 in Charlestown for the Revolutionary War Encampment.  Cathy and I used to be members there, and enjoyed many a visit including Thanksgiving Dinners by candlelight in front of a fire.  I would love to be involved as a re-enactor in some way, well maybe someday, but I still enjoy visiting with those that do.

Encampment Outside the Fort

area prior to the armies assembling for war.  Somehow a modern PA system was transported into the fort’s 18th century tower, and there was a good history talk prior to the commencement of the mock war on the field along the Connecticut River.  A perfect day with over 400 re-enactors taking part, and a good size crowd, probably the largest I have seen in ten years of visits.  But the Americans lost today, but will have another chance next year. 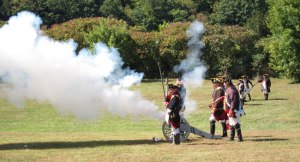 Somehow I can never go straight home, and have trained Blue Belle and Black Beauty accordingly, so off we scooted over the old bridge into Vermont and headed to Springfield where I wanted to pick up a back road up through the country side to Brockway Mills, Vermont.  I always enjoy stopping and grazing at the Vermont Country Store, which I did, even when it is crowded with all the out of towners making Vermont greener.  A fun place to visit, and often I head there just for a quick turn-around drive.  Back home in three hours, I just felt like writing again and sharing.

My main computer thrust this weekend has been to continue learning the WordPress software, and late yesterday I got the idea to start a website for The Walpole Players.  Last year when I talked about our production of A CHRISTMAS CAROL on “Shunpiking with Ray” I noticed that I had a good number of search hits looking for “Walpole New Hampshire Christmas Carol” so it made sense to establish a separate presence so our audience and contributions to the local food shelves continue to grow.  Please visit and “sign-up” to keep abreast of the players’ doings.  And I am getting so competent that I will next take over and improve our website for THE WALPOLE CLARION.  When will it ever stop?  I hope never.  Which reminds me, it is time to do some more research for the next adventure, so goodbye, and thank you, RAY

1 Response to A THREE HOUR TOUR – But, No Skipper, Professor, or MaryAnn