Wondering what do to tonight – it hit me – WRITE!!!  Have not written anything since

Looking from my walk to the raised beds along the porch

Monday when I wrote my monthly article, DID YOU KNOW THAT… ? for our newsletter, THE WALPOLE CLARION.  But when I get a flash to my mind to write, I have to write!  I know, this is dumb and probably one of the strangest posts you will read (hopefully), who cares, just remember I am doing this for my own gratification.

Yesterday I took a spin over to visit my friends at Sports Car Services which is always fun.  Blue Belle is regurgitating oil somewhere, so David infused some ultraviolet dye so we can search her organs later this week for the break in her innards. While he and I were out test driving a 1947 MG (after taking a spin in a 1957 MGA) we returned to find that his fellows had filled Blue Belle with veggies.  You know what they say about leaving your car unlocked in NH or VT during squash season – it will get loaded with the surplus.  Well just imagine what someone can get rid of in a convertible !!!  Seems as though the farmer pasturing his cattle in David’s fields dropped off cartons of surplus, and for some reason the guys would prefer to have cars in the bays instead of veggies.  I am set for awhile, yeah!!!

Overall view of beds and pond

Which brings me to my garden, and the reason for this post.  Not quite two weeks ago I told you that after four years of trying I finally got a slow start playing in my dirt, and shared an image.  I have had some great growth.  Last Thursday I began digging a hole to 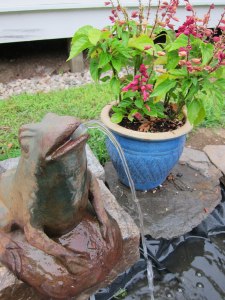 line for a pond.  I have had a cast iron frog for years that I have wanted to squirt water into a pond.  About 8 PM when I had the hole done and lining in place Blue Belle and I squirried to Keene to pick up a pump and tubing, and by 9 PM the gentle soothing sound of running water could be heard.  I have been watching my cherry tomato plant race to the sky, and fortunately I put in only one small cucumber plant as it is taking over my real estate.  Today my neighbor, Jill who runs the Walpole Farmer’s Market on the Common, came with some seeds for carrots, dill and beets and showed me how to plant them.  She also suggested that I get something to get my cucumber plant to also reach for the sky, and I got something late this afternoon.

Unless you have done it, you probably have no idea how much fun it is to watch something grow, particularly veggies.  I remember planting some carrots as a small child, but think I got nowhere, but am having fun now.  And, this post is to share some of that excitement in 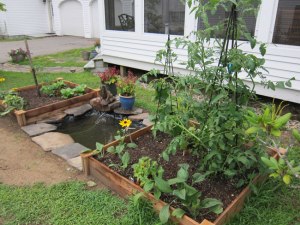 case you do not have some greenery to watch yourself.

Earlier today number two son, Gary, emailed me saying he was reading Paul Theroux’s THE GREAT RAILWAY BAZAAR, and was getting the “itch” for a train trek.  I checked my computer and sold my last copy in 1999, but still had on the shelf (now on the porch with me) Theroux’s THE OLD PATAGONIA EXPRESS: BY TRAIN THROUGH THE AMERICAS.  So, this vicarious journey shall begin later this evening.

And then, tonight I got an email from Cunard – a Sale on single fares!!!.  Trans-Atlantic crossings from $899.  What a great price to get to England, and I currently have two things I have to do there: 1) Dickens World in Kent and 2) Heritage Motor Centre Museum in Warwickshire.  And, second they have a sale (for a sail – ha, ha) from NYC and back stopping at Newport, Boston, Saint John and Halifax for $1000 for 7 days.  Throw me in that pot too.  Who wants to join me?

So, besides watching my garden, who knows what is next.  Hope you enjoy these silly pictures.  Maybe I should chronicle the same cuke every 24 hours for a month or so.  As always, yours, RAY 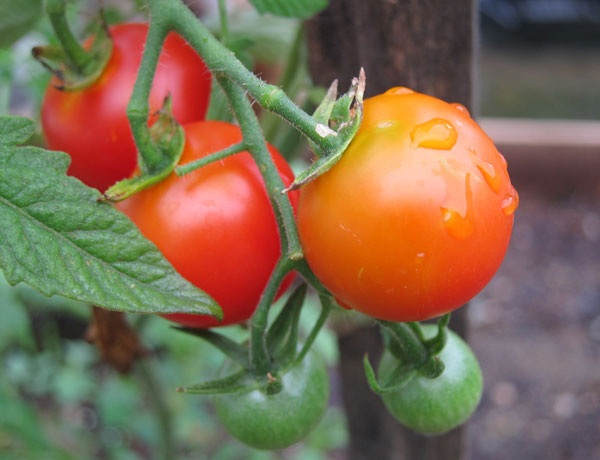 This entry was posted in Miscellaneous Musings. Bookmark the permalink.