It is time to start sharing my Trans-Atlantic crossing, but having completed my first 24 hours at sea I believe it may be hard to tell you all that happens on the Queen Mary 2 (the only remaining ocean liner with regularly scheduled crossings) – there is just so much to do, and I have been running and exploring all day. As usual I will be preparing my posts offline, and unfortunately my first attempt to get on-line Wednesday evening via satellite did not work. I have been told, however, that there have been satellite problems all day, but everything worked perfectly on the last voyage. Hope I get to use the 240 minutes time that I bought (since you are curious, a $90 package).

Looking back at NYC from the Starboard Side of QM2

I left Bellows Falls by Amtrak train shortly after noon on Monday for a 6 ½ hour trip to NYC’s Penn Station where my son Gary met me at the station. We then took the 7:11 NJ Transit train to my daughter Julie’s house for the evening. The kids were already asleep, but we were all up by 6 AM and I had some time to play with Nikhil and Devi before he went to playschool and she to a music class. About one on Tuesday Gary drove me back to the city, crossing Manhattan and the Brooklyn Bridge, and then to the Brooklyn Cruise Terminal. It was hot, traffic heavy, but an uneventful and easy trip. Check-in at the terminal was smooth and before I knew it I was in my stateroom, unpacked and off exploring after a bit of lunch. Sailing time was shortly after 5 PM, and heading out of New York harbor is something that must be experienced.

The lecturer on ships gave some commentary as to how the docks have changed with the loss of cargo ships and cruise liners. I took many pictures and panoramas, but do not really like any of them (too postcardy). What is impressive is finally passing under the Verazanno Narrows Bridge with 14 feet to spare. Topside was packed with everyone 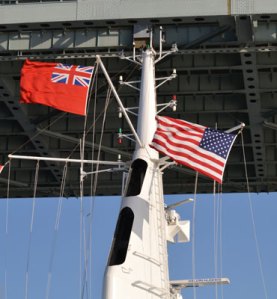 Passing under the Verazanno Narrows Bridge

enjoying the views. The first time I passed under the bridge I was aboard the USS SULLIVANS DD-538 and no one was allowed topside because rivets could still fall during the final stages of construction in 1964. Since then, this is my 5th trip under the bridge without that precaution.

(Continued on Thursday 31 May) Once at sea I toured more, and went to the welcome aboard show in the theater prior to changing for dinner. I choose the late seating at 8:30 to allow for a longer day. I joined my table for eight which includes three women (two from the UK and one from Michigan); an Emory professor who due to an inner ear problem cannot fly; a Connecticut attorney who likes the quiet time to work (both of these gentlemen’s spouses will fly over to join them); and a couple from Northern Ireland. You know the world is getting smaller as this couple lives in the town outside Belfast where I will spend three nights, and his mother lives in Portrush on the Antrim Coast where I will spend 2 nights. It is a nice dinner group, but following conversation I headed back to my stateroom after a long day. Wednesday’s program was there and it takes a long time to sort through the activities. One difficulty is an overlap of times, at least for my interests (although in chatting with another passenger she noted the same concern). Was I ever surprised to find computer classes on board (essentially for Apple products and Adobe Photoshop Elements). At the last minute I packed my new IPAD with my IPOD Touch and laptop in my bag. “But, Ray,” I thought to myself, “you don’t know how to use it, so why take it!” But then I remembered when David questioned me on the silliness of not taking my TracFon charger last year to Ireland when I discovered the phone had been bumped and turned on and ran down. “It is so light,” he said, “just take it.” So, yes besides all my chargers (and adapters) the IPAD is with me, and Thursday I am taking “Using an IPAD: learn how to use your IPAD effectively.”

My Wednesday activities were as follows: An Introduction to the ship’s internet system; lecture – FLOATING PALACES: THE GREAT ATLANTIC LINERS; Overview of Photoshop Elements (I have used it for years, got some hints and over the fright of trying things – I will pass on the next three $30 courses – will now pursue my own manuals); IPOD, IPADS and IPHONES – an introduction (more good hints). Then it was almost time to get ready for the first formal evening proceeded by the Captain’s Cocktail Party, and followed by a formal ball. There were two lines for the party, and I choose the line to meet the captain, and as you then entered the ballroom wait staff was lined up with trays of drinks to select. Many folks thought that in uniform I was an officer aboard the ship, but

others did know I was US Navy. At the party I talked with several nice couples, and at the conclusion as I was heading for dinner another gentleman stopped me to thank me for my service – always nice. He introduced himself, gave me his card, and we had fun talking. He is Nelson Riddle’s son, Christopher, who lives about 50 minutes from me in Vermont, and he has enjoyed trans Atlantic crossings for decades. He told me to email him.

After a lovely dinner with my table mates I stopped and took a look at the formal ball before retiring to review Thursdays’ activity options and setting my clock ahead one hour for a time change.

Even though Thursday is done except for another formal dinner, at this point I am going to end writing to you and post this blog (I like to keep my posts to 1,000 words). My next post I want to share some images around the ship which gives me an art deco feel, which is probably intentional from the hay day of the great ocean liners. I will also let you know what I did as this unique adventure continues. Thank you for joining me, as always, yours, RAY

And, since I have often showed you “out my window”  I have an interior room, but here it is 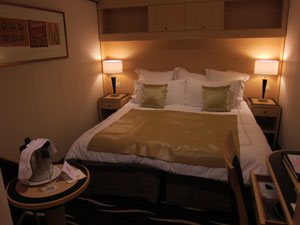 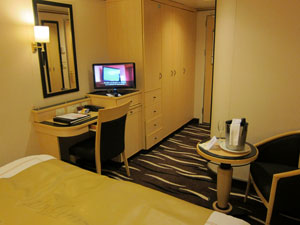