Posted on January 20, 2012 by Ray Boas
As I have fallen asleep each night I have thought of “fast facts” that I should have mentioned.  Our afternoon of snow shoeing was in 10 degree weather, and while travelling in “Kitty” it was 6 degrees outside.  However the wind was really blowing down the Grand Canyon of the Yellowstone so the wind chill was really something, but I only felt it on my exposed hand while taking the panorama shot.  Yes, I had worried too much about being cold.  The proper layering of a wicking layer (the right long underwear to get moisture away from your body), an insulating layer of fleece and then an outer windproof layer does the trick.  Of course, the inside of the outer layer is soaked when you take it off, but you are not affected.  You may also have wondered about the water flowing in the rivers with little ice.  Well, the thermal activity in the area of my shots is keeping the river waters in the 50s, and what I did not include were shots of the happy swans and ducks in both the Madison and Gibbon Rivers.

We awoke on Wednesday to long overdue snow for the area, and it has been fierce and unabated all day with howling winds causing amazing drifts.  Something else I had failed to mention was the difference in the snow here as compared to home.  In the East we usually have wet and heavy snows, but here it is relatively dry and the snow is a fine powder, thus with the wind we approach “white-out” conditions.  In the morning Lee continued discussing the fascinating geology of the area and the various thermal features including hot pools, geysers, steam vents, mud pots, etc. and how they come about from the magnum of the earth.  This reminds me of my touring similar areas in Iceland in November 2010 – another place that deserves a longer visit again very soon. 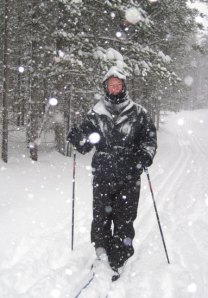 Yes, this is me on a very snowy XC-Ski afternoon

Gallatin National Forest.  The snow by this time was really getting heavy.  It was quite different skiing as compared to the groomed trails I have been on in VT and NH.  We were skiing through ungroomed powdery snow, and as the 3 hours and 3 plus miles passed the snow we had to plow through got deeper and deeper.  Done at 5 PM, dinner at 6 followed by some more discussion on geology and the animals of the park.  The snow storm began to intensify and the winds picked up.  I heard that there were up to 8 inches last evening, but with the winds it moved around and drifted at great deal.

Thursday, our last full day, started early since we had to be at the snowmobile place at 8AM to get fitted with suits and get instruction for our tour into the park to Old Faithful.  If I have not mentioned it before, you cannot access the park at this time of year except by Snow Coach or Snowmobile.  The snow and winds were so bad there was a question as to whether the West Entrance to the park would open or not, but fortunately it did open by about 9, and off we went for what ended up being a 65 mile excursion until 5 PM.  We

struck out towards Madison Junction were we turned south towards Old Faithful.  I drove all day with a lady who chose not to drive.  It was intense steering requiring attention at all times, and I think that as a passenger you can enjoy the scenery and nature more on a snowmobile. 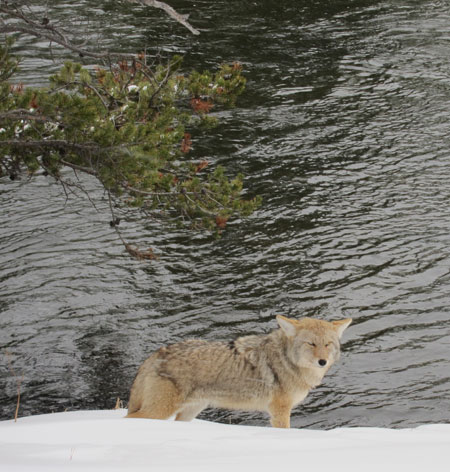 not something you usually see.  Following the Firehole River (supposedly named years past because of the thermal activity surrounding the river) we took a side route along the remote Firehole Canyon Drive with its views and waterfalls (oh, what a TR3A road!!!) 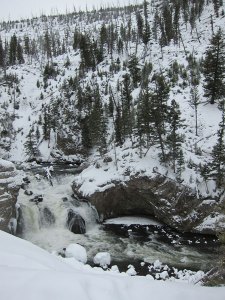 Instead of heading straight to Old Faithful and eating we opted to tour the  Lower Geyser Basin and Fountain Paint Pot.  Our guide, Michelle, told us to take our day packs and backpacks with our lunches because the ravens are very talented and can open zippers, Velcro, etc. to get food.  We fooled them, but right on the controls of my machine one had pooped, probably in anger. Here you can see in an enjoyable walk (even in the winter)

A fascinating place, and I encourage you to read more about it.  And, before I forget, it was great not having crowds to view all that we saw, plus I do think that what we saw was easier to see on the white snow background even though it was overcast, and snowing all the time we were in the park.

Leaving this area we soon came upon a herd of Bison in the road, and the pictures will tell the story.  We stopped, of course, to see where they were headed. 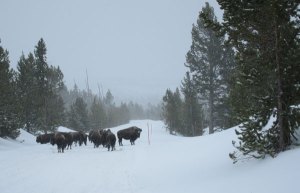 Our guide eventually said that we should continue on close together and keep on going.  Nice plan, but the Bison did not cooperate and we had to stop while they charged at each other for awhile.  Soon an opening occurred and we got past as they finally moved off into the field.

View from my snowmobile !!!

Arriving in the Old Faithful area we parked near a group of three yurts for people in the winter to have their lunches.  We had just a short time to wait for Old Faithful, but all of a sudden the Beehive Geyser became active – a treat since it is not predictable as Old Faithful is.  I figured that I had to give you an image of Old Faithful, so I went a tad further, and here is a 3 minute video that you can watch (but you do not have to watch it all).  Remember it was overcast, terribly windy (you will hear the wind) but very few get to experience this in winter, and our guide said that in the summer with the crowds it is hard to see and hear, so enjoy – just click on the image and start the video.

Leaving the Old Faithful area it was going to be a straight run back in hopes of finding more wildlife, but little was to be seen.  We did spend some time watching a Bison herd that we saw the other day with the Snow Coach, and just as we were leaving I remembered my IPodTouch with the panorama app – so quickly started shooting.  Click on the image below for the full effect.

Panorama of Bison off in the fields - click on image for full effect, but do come back>

Well, this evening as I have been working with images and chatting with Rich, Scott and Betty we are just so thrilled with how smoothly and wonderfully these past few days have been.  This has been a truly remarkable, unique and memorable trip.  Tomorrow morning we will have a few more hours of discussion and then the 16 attendees head off on their own ways.  We head back to Bozeman, and I may “blog” one more time.  I feel as though I have not provided as much education on this trip as on others, but the pictures do speak volumes, and I am so pleased that I made this trip. 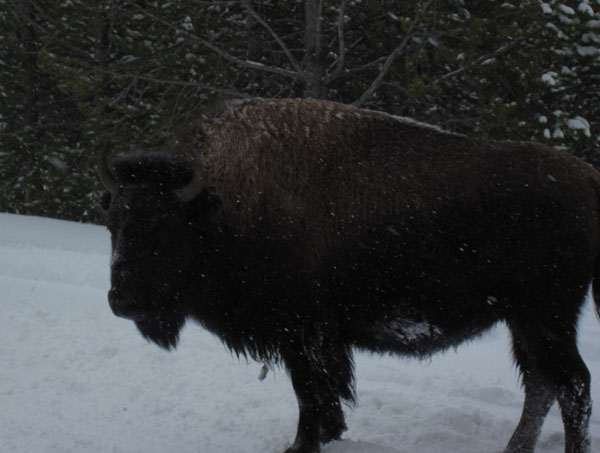 This entry was posted in 2012-a - Winter in Yellowstone - (Jan). Bookmark the permalink.