Hi all.  I am sitting in the Lisbon airport and have  already checked in for the flight.  All seems to be on track and on time.  I have about an hour and a half here before boarding time, and then about an hour plus layover in Ponta Delgada, Azores, so I should be able to post this before arriving in Boston.

Yesterday was GREAT.  The van showed up as scheduled, and our guide was professional and fabulous.  We left at one to arrive back at seven and the plan was to visit the caves at Mira de Aire prior to going to the mediaeval walled city of Obidos.  These were Corinne’s perfect suggestions.  I sort of acted as coordinator, and “under my wing” were 7 ladies.  We first headed off on back roads (shunpiking Portuguese style) to the caves at Mira de Aire, about 15 kilometers away.  Our driver/guide provided a nice background to the area which answered many of my unasked questions as to the building materials and paving materials use.  This is limestone country, lots of limestone, and that is what I have seen in the little blocks making up the sidewalks (all hand cut and laid) and in the various buildings.  He also pointed out various trees, etc.  I learned that most of the firs had been imported years ago to provide building material.  Because of the limestone (at least in this region) not much grows.  I had learned about olive trees in Italy, but saw fields of a hybrid developed that lasts about 15 years but grows faster bearing more fruit.  I mentioned that I read that olive trees can live hundreds of years and he said that they have dated some to thousands of years in Portugal, but that is not what we were seeing in the fields.

And if you remember anything from geology, you understand that this region is ripe for 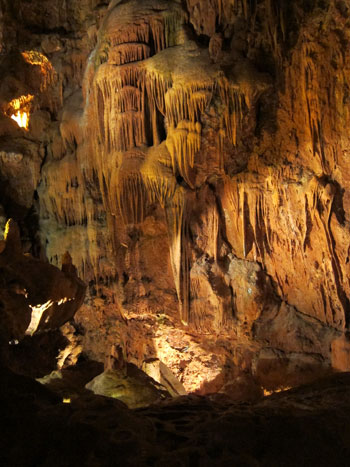 One view in the cave

caves forming from ground water (or underground streams) wearing away the stone.  The cave we visited was first discovered in 1947 through a small hole, but exploration when further.  It was not until 1974 that an entrance way was cut and passages and steps created for visitors to descend 110 meters down (there is a lift to bring you back up) and adding lighting effects and fountains.  This is the largest cave in Portugal and is classed among the “Seven Wonders in Portugal.”  Each cave is different, but I will say that I was more enthralled with Carlsbad Caverns in New Mexico that Cathy and I visited in the late 1990s – she loved caves, and it was “on her list.”  What was fun to watch is that we were the only ones there, but had to wait 15 minutes for the guide to escort us – she was there and told us so.  Well, the waiting spot is the gift shop, the ladies had fun (I am hoping it is a larger plane going home for all their goodies – ha, ha). Obviously that was the plan. 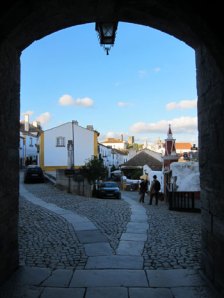 The entrance to Obidos

Leaving the caves we cut back over to the main highways to head to Obidos a mediaeval walled town.  This visit was worth the trip, and I need to read Rick Steves’ book on Portugal to plan another trip back to see this and similar old towns.  They have found remains from Roman times, but most of what is seen dates from the 12th century.  There was an earthquake in 1755 that destroyed much, so the result is a beautiful blend of Mediaeval, Gothic, Renaissance and Baroque.  There is a castle (a luxury hotel since 1950), and from there I walked along the town wall.  I was able to view several churches. Saint Peter’s Church built during the 13th and 14th centuries, but rebuilt after the earthquake, was particularly impressive.  I also enjoyed the town square with Saint James’s Church (1186, rebuilt 1755), the town portico, pillory house.

Walking along the Town Wall in Obidos

The shops are on one small lane with smaller lanes off to residences.  High end quality items were everywhere.  Obidos is the site of a chocolate festival, and a must do is to have Ginja in a chocolate cup.  This is a cherry liqueur, and is vended outside many of the shops for one Euro.  I first tried it in a shot glass shaped chocolate cup – great!!!  Then I saw a 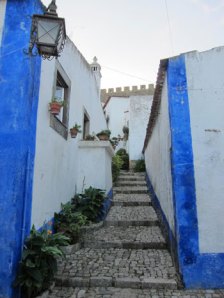 chocolate cup that was shorter with a handle or probably a sipping spout.  I tried that too, tasty also, but not as easy to handle.  Think I will have my liqueur in a chocolate shaped shot glass from now on (along with my Guinness from Dublin?).  We arrived there at 4 and the ladies said they wanted to leave at 5:30 (I had originally planned on 6).  As I walked around and saw their shopping bags before even getting to the castle I told them 5:45 at the van, being the good tour director I am.  As usual one person always does not listen (she was taking pictures of everything) so we got underway at 6 arriving back in Fatima at 7.  A most perfect afternoon.

So here I sit, 15 minutes to boarding time, plenty of time to re-read and double check, and then post.  A great time, grand experience, and a treat to have been able to experience the splendor and history of Fatima and Our Lady’s visits.  This week feels like it has gone faster than others.  As I was falling asleep last night I was looking forward to getting home (I love being home), but I was also starting to long for a new adventure.  So, what should I do?  Any suggestions?  Leave a comment if you have any please.  Should I experience Christmas again in Quebec City, or go to Dublin or Scotland.  Most journeys this year just happened, I awoke with an idea.  So maybe that will happen again soon.  I will let you know.  Thanks, RAY