The Basilica - Feels as if you are in St. Peter's Square, but on a smaller scale.

Where to begin?  For a peaceful, contemplative trip there is still so much to share, or at least write down because, as I have mentioned, to do so is to “live it twice.”

I don’t know how much of the history and background of Fatima to write about, so I will give a basic idea (and then some links) so you will have an understanding of what I am seeing and appreciating.  (here is a great link that I just found that details it all simply) In the Spring and Autumn of 1916 the Angel of Peace appeared to three little Shepherds, and in the Summer the Angel of Portugal spoke to them.  This was preliminary to their first visit at the Cova da Iria by Mary on May 13, 1917, at which time she told them she would appear on the 13th at Noon for the next five months.  Mary revealed to the eldest, Lucia, the “three secrets of Fatima” which foretold major events to come during the 20thcentury including: the end of World War I, the beginning of World War II, and the assassination attempt on a Pope, and later the Consecration of Russia leading to the end of the Cold War, the Russians leaving Poland and the tearing

Our Lady of Fatima on the Altar in the Basilica

down of the Berlin Wall.  This is almost 50 years of history in a few lines, so please read more.  In history there have been many Apparitions and Miracles, but what I find fascinating with Our Lady appearing in Fatima in 1917 is that it is within our recent history and memory with photographs of the Pilgrims experiencing the dancing of the Sun on October 13, 1917, eyewitness accounts in newspapers and books, and future events occurring as told by Mary to Lucia and the children.

At 9:30 we had Mass at the Capelinha, the enclosure at the site of the Apparitions of Mary.  Then we toured the Basilica seeing the tombs of Francisco and Jacinta and now that of Lucia.  I forgot to mention yesterday that the city is recently build, mainly in the past 20 years, and construction continues of hotels in anticipation of the 100th anniversary in 2017.  But with the downturn of the economy there are vacancies and unfinished projects everywhere.  Corinne said she has never seen so few people here.  Then we went to a little known spot, a picture museum in the basement of a home in a residential area run by a religious order.  Here is the whole Fatima experience documented in photographs up to the Beatification of Francisco and Jacinta in 2000 with Lucia in attendance at age 93.  I purchased four books for just over 8 Euros.

Corinne explaining the images in the Photo Museum

Following lunch we saw a film about the lives of the children and their experiences, afterwards I walked to the village of Aljustrel to see the homes of the seers.  Beautifully restored in 2000, built in 1888, is the home of Jacinta and Francisco who were born there, 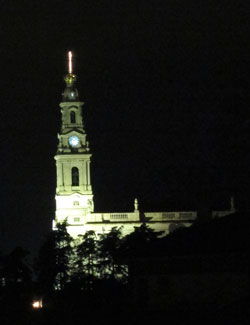 This year I have shown you views from my windows in Ireland, Italy, Canada, and now here is the view of the Basilica from my window.

and Francisco died there from the Flu Influenza of 1918.  Nearby is cousin Lucia’s home built in 1885 and restored in 1987.  Part of the experience is seeing where and how these simple peasant children lived.  Back for dinner at 7:30 – Cod, second night in a row with fish.

Friday – November 4th — We had an appointment for an English tour of the exhibition, “Fatima Light and Peace” at the museum of the Sanctuary of Fatima.  Shown here are 1,000s of items offered from around the world to Our Lady of Fatima, all of great beautify and many of significant historical, artistic and monetary value (move over Fort Knox).  I think the highpoint is the crown used to adorn the Stature of Our Lady of the 13th of each month from May to October.  It was offered on the October 13, 1942.  In 2000, at the Beatification of Francisco and Jacinta, Pope John Paul II took the attempted assassins

bullet that almost killed him on May 13, 1981, and placed it into a hole that had been left inside the crown when made.  It fit perfectly!  Do you believe yet?  Following Mass many of us went to a new museum , Vida de Cristo (the Life of Christ).  I am not a wax museum person, but found this exhibit wonderfully done and of special help to me is the guide booklet we were given. It details the 33 scenes shown with narrative text in combination with the related Gospel.  I will admit I am not as familiar with Bible stories as I should be, however, this booklet is extremely well done, and I will have to share it.  I took pictures of the scenes and will sometime have to develop a page narrating them.

After lunch we all headed back to Aljustrel along the original old path through olive groves, and along the path are the stations of the cross.  In the fields are two important places which I did not visit yesterday.  We saw Valinhos, where Mary appeared to the children on 19 August 1917 because they had been imprisoned on the 13th by the local Administrator who hoped to get the secrets from them, or get them to admit to lying.  Further along is Loca do Cabeco where the Angel of Peace appeared in 1916, and on the third apparition there gave them communion.

The Angel Giving Communion to Lucia, Francisco and Jacinta

We then headed on to the village, but with most folks tired of walking, they headed back

tothe hotel, but I along with a couple others continued on foot to the original parish Church of Fatima where the three children were all baptized.  Across the street the cemetery was an amazing sight to see with all the unique graves decorated with live flowers following All Souls Day.

A 40 minute walk back to town, and that was the end of the day before dinner.  Yes, fi sh again – third night in a row – Wreckfish.  Scary sounding isn’t it?  Well I googled Wreckfish, and my findings did not engender enthusiasm, BUT, if you ever see it on a menu, go for it.  Like a salmon steak, and it was good.

I brought only three books with me to read this trip, I am getting smarter.  However, I think I will stop carrying books because I spend my time (and get so much enjoyment from) revisiting my day and thoughts putting them down here.  Part of the process is reading what I bought and also researching on line to learn more (and find some links for you).  My “blog” posts take hours to do, but I love it.  Thanks for bearing with me, yours, RAY 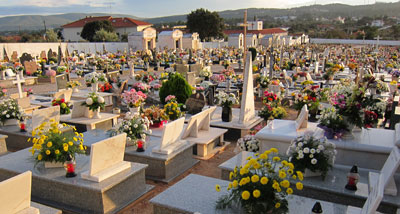