Saturday, October 1, 2011, a rainy day all day, and chilly too.  With all the room in the van you would think I would have thrown in a winter coat too.  But it was in the 70s and 80s recently, what was I to think?  At least I knew that it was supposed to be in the 40s and 50s in Canada so I did pack a sweater and windbreaker.

Route 30 was back open across Vermont so I scooted over to Manchester, down the super slap to Bennington, and then over the new super slap (albeit smaller) that bypasses Bennington and gets you right into New York State.  Essentially a two hour drive to the Hudson River this way, deducting the time spent at an antique center.  Walked into the center, and there was a small revolving bookcase at a give-away price.  I have owned, many, many of these but always sold them in my New Jersey shop, never keeping one.  This one I will give a try on the porch back home, and if it does not work off it goes for sale at the Colony Mill at a give-away price still giving me a profit.

I made my two stops that I wanted on Saturday: the Oriskany Battlefield and Fort Stanwix in Rome once I travelled west on the New York Thruway.  I am getting more and more of an appreciation of the Mohawk Valley and river in our early history both as a main transportation route to and from the west, but also as an important pivotal point in the American Revolution and subsequent hostilities between loyalist and colonial settlers and British soldiers and Native Americans supporting both sides.  Not enough space here to get into all that history, but I

Monument on the small Oriskany Battlefield

encourage you to learn more as I will. Colonists on the way to assist colonists who were under siege at Fort Stanwix were ambushed at Oriskany by a few British and a larger number of Native Americans on the British side.  Called the bloodiest battle of the American Revolution, the battlefield is really small where the Colonists in short order caused the enemy to retreat.  In time the British also abandoned the siege on the Fort and their failure there helped lead to the defeat of General Burgoyne at Saratoga.

Now the reconstructed fort in Rome is fascinating.  It feel in disrepair in the 1780s and in time the City of Rome built up around and then over the fort.  Totally urban, in 1935 FDR declared the site a national monument but it was not until 1970 that urban renewal cleared the area, archaeological digs were begun, and the reconstructed fort was completed in 1978. The park guides were extremely informative, and I do recommend a visit if you are travelling past on I-90.  I really don’t need anything, but I always look at the gift/bookshops at museums.  They had some hand-blown glass candlesticks from the Jamestown National Park, and they caught my eye, and are wrapped up now in the van to join my other treasured candlesticks.

Now, not everyone is a B&Ber, and sadly my step-mother has only had bad B&B experiences, but if you travel with me you are in for B&B treats – and last night was absolutely tops.  I had emailed the one B&B listed in Rome, the owner was going to be gone but she told me to contact her friend Fred who was still awaiting the last stamp of approval before he could “officially open.”   I arrived at The Oak and Ivy B&B on North George Street, knocked at the front door, and was awe struck as I entered.  Fred has spent 3 years restoring this grand home with an early 19thcentury décor, and he has done it well.  It was 5 PM, he had tea ready and shared it with me in one of the sitting rooms. A fascinating man and we had lots of common interests.  He directed me to a fine restaurant on Delta Lake that I would never have found myself, and when I returned I sat in another sitting area outside my room and researched the history

Where I sat last night with my travel literature and laptop.

I had learned that day to reinforce what I saw, and prepared for my journey to Canada.  Cathy would have loved it here.  For the first time ever I took pictures at a B&B and am sharing two of them with you.  I even took pictures of my marble lined bathroom.  Breakfast was unbelievable and Fred even packed me off with some fresh scones.  The total fare for this splendor – $65 – yes, I told him to raise his prices. “But this is a depressed area,” he replied. 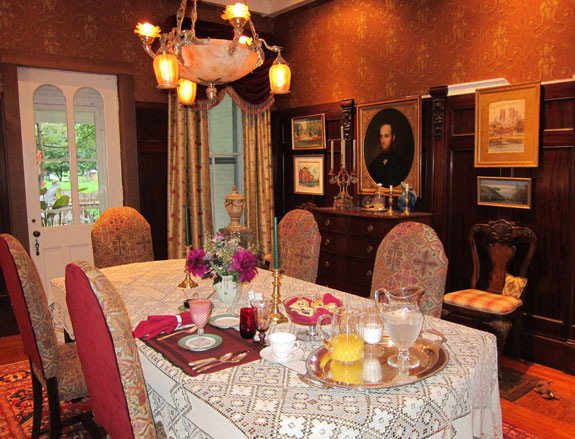 Today, Sunday I headed off in more rain on back roads to Watertown, NY passing farm land, and small villages.  In Watertown I picked up I-81 to the border crossing on the Thousand Islands Bridge.  Never before have I been in this area, and again I was overwhelmed with the beauty and the vast number of small islands dotted with quaint homes.  Another trip is in now “on the list.”

I travelled down the back roads finally arriving at the Hotel Kenney at Jones Falls.  I entered the lobby, the fire was burning, it is spacious with many sitting areas (I am in front of the fire now, “ala Red Lion Inn) and checked in only to find that I was assigned to one of the out buildings on the water built in the 1970s.  “Isn’t there a room in the inn?” I inquired (no, not what you are thinking).  “Yes, but it is on the third floor, would you like to see it?”  And it is just what I like, old (but clean and tidy), crooked floors, and a view right overlooking the canal locks.  I later walked over to the Chalets – I made the right choice.

Hotel Kenney from the last lock. My room is the two windows on the top floor just to the left of the chimney - WOW.

Our orientation was at 3:30, there are twenty people here for the program, all couples, and another fellow and myself.  The dining room is lovely, food was plentiful and good, and after dinner we watched part of a video on the War of 1812.  Something extra the group leader brought along, and another subject I know too little about (even though the video is from the Canadian view-point).

The week we will travel almost half of the Rideau Canal, and I am excited.  So, thanks again for bearing with me and “listening.”  Yours, RAY